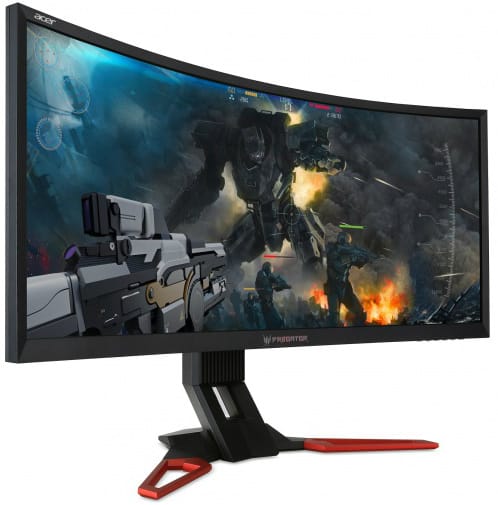 The Acer Predator X34 was a monster best G-Sync gaming monitor received quite a lot of attention because of its curve and of course gaming performance. Unfortunately, it was just simply too expensive for many gamers with a price tag of $1,200. Well, we have a new kid from Acer that is $200 cheaper, yet it still offers a superlative gaming experience.

Folks meet the Acer Z35. That is a curved, 35-inch monitor, with the resolution of 2560×1080 that uses a new generation advanced MVA panel but there is something more. The refresh rate goes to an impressive 200 hertz. You heard that right, 200 hertz. And as usual, Acer added a little bit of sweetness with the addition of G-Sync. So overall we are looking at an alternative to the X34, which offers a much faster panel but lacks the color reproduction provided by IPS and the X34’s better resolution.

Unfortunately, due to bandwidth constraints of today’s display interface connectors pushing such high refresh rates to a high-resolution monitor like the X34 just isn’t possible. So Acer made this Z35. One thing to mention is that the Z35 uses a panel that natively runs at 144 hertz. But through the use of Acer’s on-screen display menu, it can effectively be overclocked to a maximum of 200 hertz. But achieving that 144 to 200 frames per second within today’s highly demanding titles will be challenging unless if you have a crazy GPU setup. You could play around with graphics card settings to increase that frame rate, but it ultimately boils down to one question. What is more important to you, higher graphics quality or higher frame rate?
Another concern is, of course, the dot pitch level of this monitor. A 34-inch screen with a 3440x1440p resolution, like the one found on the X34, would provide a lot of virtual real estate for productivity or more specifically video editing. Meanwhile, the Z35’s 2560×1080 screen just looks enlarged and will likely provide an inadequate experience for professionals. You lose quite a lot of real estate especially if you want to have a dual or tri-window setup. Something that theX34 can quickly achieve due to its high resolution. I think Acer went a little over aggressive this time in the design department too. Don’t get me wrong the X35 was certainly gorgeous and has a pinch of aggressiveness though I prefer a more subtle approach.

Since this is a curved monitor, it only offers a 130 millimeter of height adjustment and 30 degrees of tilt from -5 to 25 degrees. Also, the whole unit is rock solid which means you don’t have to worry about it tipping over. That is a21:9 curved monitor and it looks great especially when gaming like the X34. The enhanced immersion by surrounding our vision with one continuous image is great. Although do know that the curve can add visual artifacts to menus and distort key elements of a game interface. Just like the X34, the Z35 includes down firing LEDs that allow the bottom edge to glow in one or many different colors. All of which can be customized within the OSD. This feature plays a crucial role as much as the X34, or you can have it glow one color when G-Sync is enabled and another when the feature is disabled. 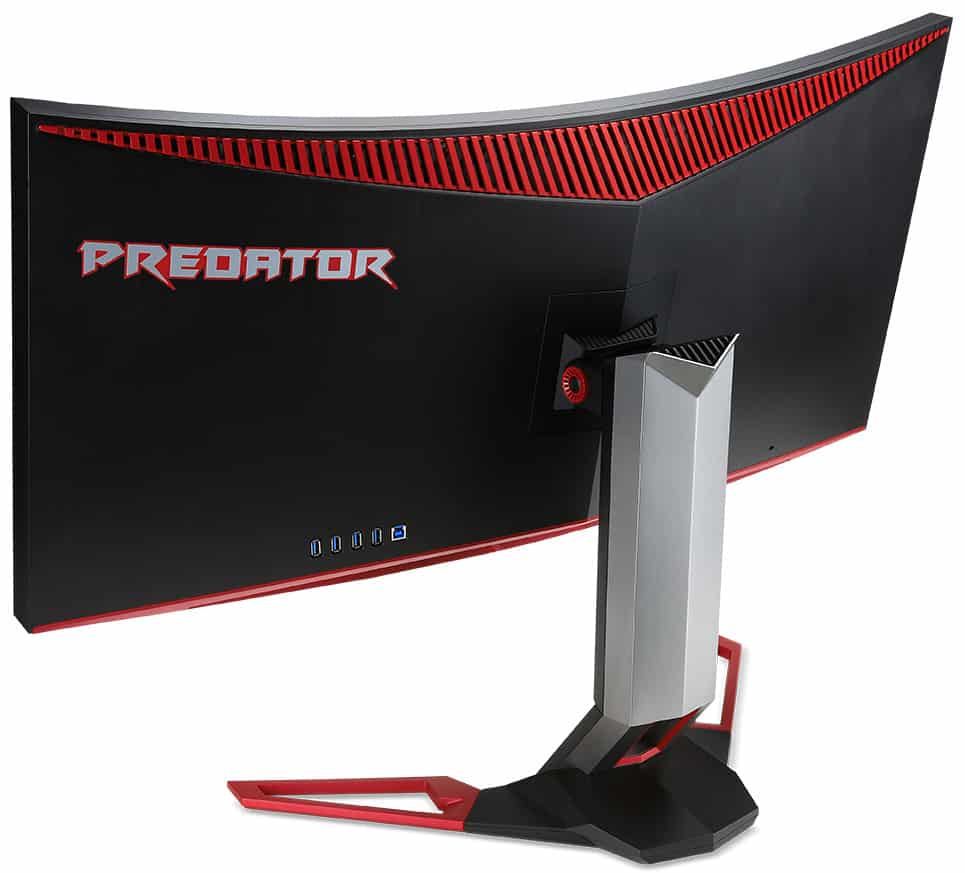 Regarding I/O of the Acer Predator Z34

We have four USB 3.0 ports with a single 3.0 upstream port. Acer did the right job placing them right behind the panel for easier plug-and-play and on the bottom we have power in, Displayport 1.2, HDMI 1.4, audio out port connector respectively. The OSD is pretty much the same found on the other Predator monitors. From our testing, the physical buttons were easier to navigate. When you enter the OSD, you are greeted with a small shortcut menu composing quick access features like three in-game modes that can be programmed to your preference, An adjustable overdrive that pushes more voltage through those liquid crystals forcing them to change from one state to another faster. There is also volume adjust, input selection and the option to enter the advanced setup. Within the advanced configuration, Acer greets you with the Picture tab which lets you switch between different profiles, adjust brightness, contrast blue light, dark boost, and adaptive contrast.

The Color tab allows you change the gamma, color temperature, saturation, and 6-axis color. The language, OSD timeout, refresh rate display, transparency, and game mode can be set through their respective areas as well. Moving on to the Settings tab, this is where the magic happens. The user can switch between inputs, turn on DTS for the included speakers, change the ambient light underneath the panel to different colors, adjust the wide mode and the best part overclocking the panel to 200 hertz. As I mentioned earlier, you can only do this via Displayport 1.2 since HDMI port here is only limited to 60 Hertz.

Performance of the Acer Z35

As for performance, there is not much to complain about. The picture uniformity on the Z35 was excellent with the deviation of about only 20% which is good considering this monitor’s size. There’s no way you could see this with your naked eyes. So what was it like gaming on a 200-hertz display? Good actually. The combination of a 200 R radius curve, with that 200-hertz refresh rate, along with G-Sync support all makes it for one of the best experiences around for first-person shooters. With strategy games, the features like a curve and high-speed panel are not useful in any way, though. That odd 2560×1080 resolution can become a hindrance too. Coming from an X34, it took me some time to get used to this resolution just because of how enlarged things look on windows while the field of view in games teams is slightly more limited as well.
All in all, I had a lot of fun gaming on this beast. Playing at 200 hertz though requires a beefy video card setup. Unless if you have a high-end GPU setup taking advantage of that 200 hertz will prove to be challenging. We used an MSI 980Ti Lightning for the task, and it was not up to it in many titles. Sacrifices will be needed in other areas to achieve those higher frame rates. Acer’s Z35 gaming monitor give me a lot to think about. For one, it is still expensive at $1,000, but that gets you one of the best curve gaming monitors available on the market today.
The downside is of course that resolution and the amount of firepower you’ll need to drive it to its fullest potential. I’ve used plenty of 4K panels and Ultra Wide displays, and it does take some time to get used to the curve. Also, I can’t see using this thing for professional tasks since the curved tends to distort images a bit. But for gamers, it is hard to think of a better option if you have the cash and the money for a serious gaming PC.