The upcoming Alienware X-Series seeks to become the X-factor in mobile PC gaming by offering thinner and cooler products. The brand always tries to innovate without forgetting about high performance, incredible design, and premium quality. The X-Series aims to embody that by retaining the distinct Alienware technologies while improving its user experience with patent-pending technology.

Alienware says that these new laptops were developed to be more than just your typical everyday gaming laptop. Thin laptops have always had limitations, in both their physical and mechanical aspects. The company now has a solution for these problems using new technology born out of engineering breakthroughs.

The Alienware X-Series lead by the Alienware x15 and the x17 offers breakthrough solutions for heat, which is the biggest enemy of gamers. Thin laptops often do not have enough cooling capacity, so many of them overheat in the middle of battle. Couple this with powerful specifications and you get a capable mobile platform to compete or simply game while on the go.

Alienware’s solution starts with its Quad fan design that was conceived to circulate air effectively and efficiently through the thin chassis. the system utilizes AI for its Smart Fan technology, while the dual opposite outlet and evacuative fans take care of circulation. This ensures that the laptop’s innards won’t be suffocated, so it can dispel heat at an effective rate.

But what makes the Alienware X-Series extra special is the new evolution of its Cry-Tech feature which uses Element 31. It’s an exclusive TIM made out of encapsulated Gallium-Silicone in liquid metal form. It’s designed to maximize heat transfer and disperse it efficiently to mitigate temperature spikes which will throttle the CPU and the GPU.

The biggest improvement you will easily notice on the new X-Series laptops is the considerably thinner frames they used. That alongside the Legend 2.0 design makes them some of the most attractive laptops we’ve seen. Most high-performance laptops often have thick and heavy frames, so they aren’t as portable as most would imagine.

Alienware’s Legend 2.0 design identity features Dark Core aesthetics, along with a continuous loop or RGB lighting at the rear vents. The design is also well incorporated into the cooling engineering, so good looks do not get in the way of temperature regulation. The X-Series laptops are only 15.9mm and 20.9mm thin, making the x15 the most powerful sub-16mm 15-inch gaming laptop.

Alienware x15 and X17 Tale of the Tape 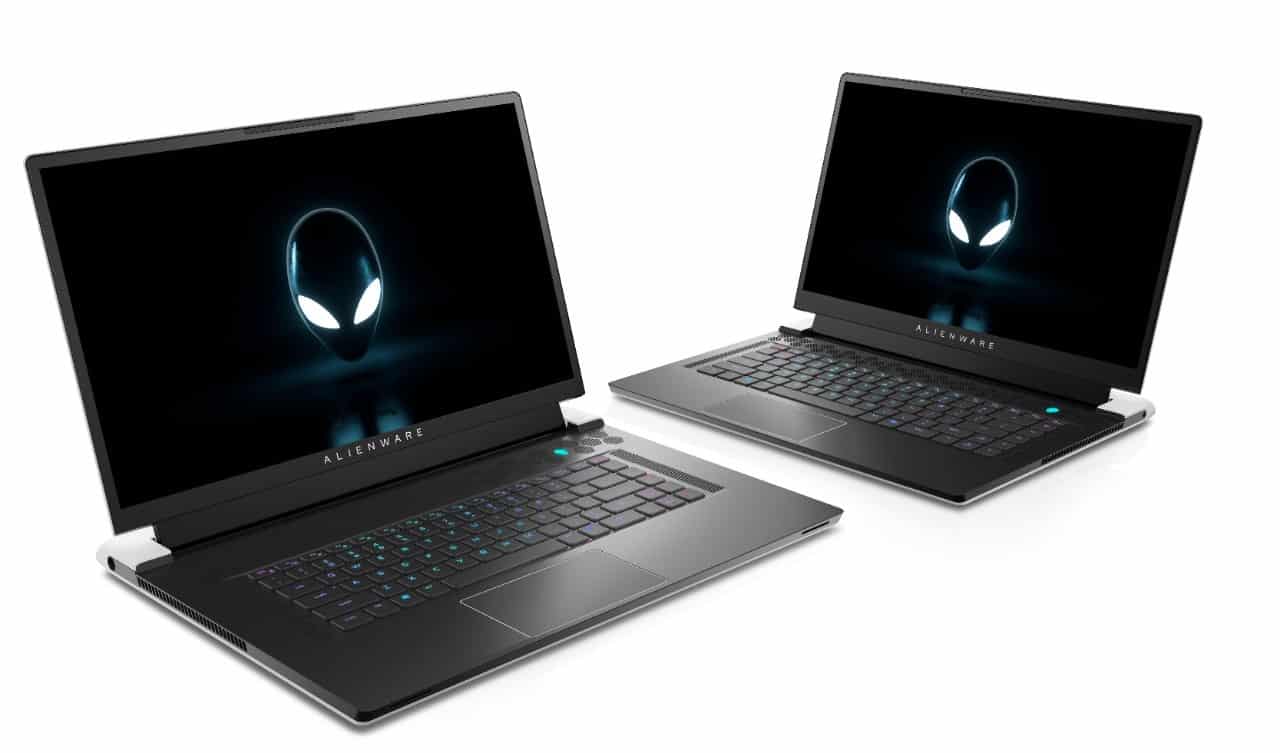 The Alienware X-Series will utilize Intel’s 11th Gen H-Series mobile processors and Nvidia’s RTX 30 Series, all the way to the mightly RTX 3080. The system’s Thermal Control Circuit offset will ensure that you have control over the CPU and the GPU’s temperature for optimal performance based on your task. You can also use any of the five Tailored Power states which are designed to respond to typical tasks, including high-performance gaming.

Another great feature we caught for the Alienware X17 is its keyboard options, which now include a 3.5mm low profile Cherry MX option. You do, however, have to configure it in the system builder once it becomes available on June 15. The stainless-steel mechanical components will provide deeper presses and a tactile experience that you won’t be able to get with other laptops.

The display options for the Alienware X-Series are equally impressive as the new design. You can choose between a 360Hz 1080p screen or a 4K UHD HDR400 panel depending on your needs or the types of games you play.

The Alienware x15 and x17 will start selling on June 1 with base configurations that will start at $1999.99 and $2099.99 respectively. Full configuration options via Alienware’s System building will start on June 15. You can also catch the live stream event on TwitchTV/Alienware at 3 pm EST if you want to check out the new laptops at their official launch.