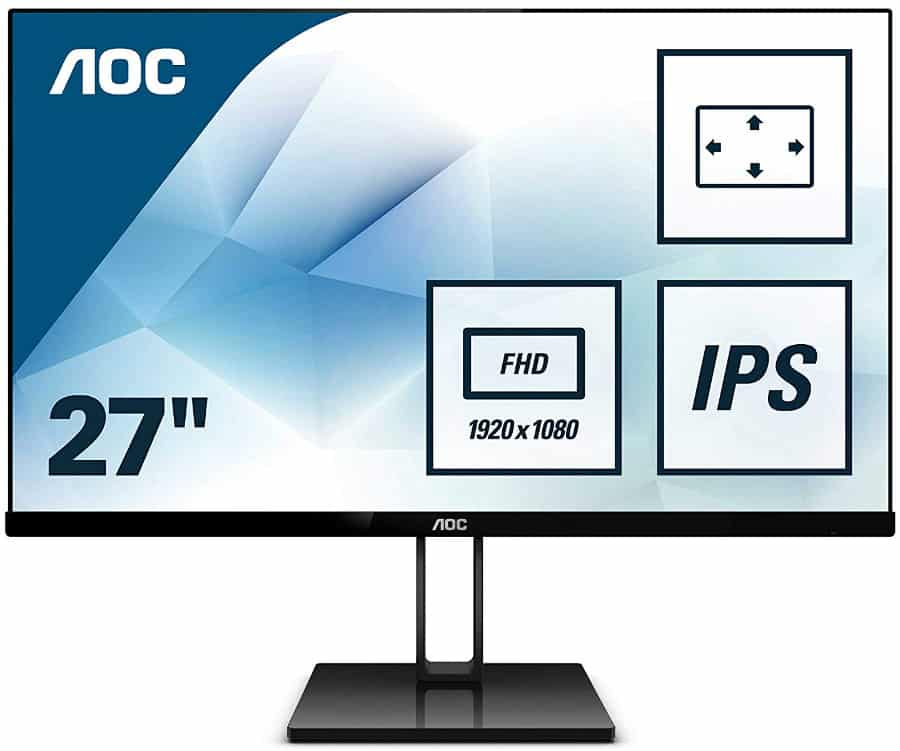 The AOC 27V2Q offers decent performance for daily use that’s packed into a sleek, bezel-free package that will look great in any environment. 75Hz IPS panel variants have multiplied exponentially in recent times due to the increasing demand for the panel tech’s improved colors and viewing angles. Let’s find out if the AOC 27V2Q has what it takes to dominate its very competitive category in the monitor market. 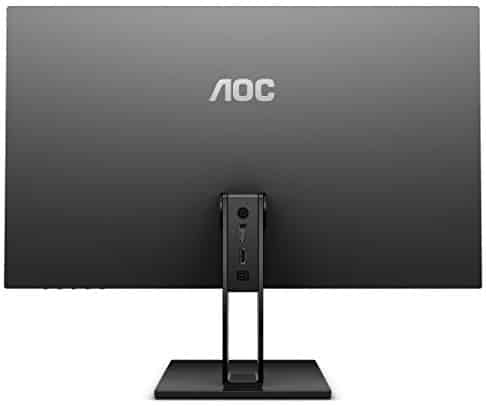 The AOC 27V2Q focuses on a single premise for marketability which makes it look exquisite but at the cost of a few features. The chassis is extra slim at around 8mm at its thinnest, going to 18mm to the bottom due to the bulge. The display is also bezel-free on three sides except for the bottom strip which has a glossy finish and a polished AOC logo.

The AOC 27V2Q is an excellent choice for modern interiors or those who want to set it up for multi-display work or gaming stations due to its looks. The monitor is thin enough to make users think that it will bend easily when held. However, despite the lingering feeling of fragility, the product’s build quality holds its own so long as you don’t drop it to the floor.

Almost every surface of the AOC 27V2Q is flat which gives it that OLED TV look, but it does compromise the strength of the device. The device slightly wobbles if you nudge the desk or even when trying to tilt the display. Some care is needed to avoid damage to the product’s articulation points.

Another smart-look design on the AOC 27V2Q is its stand which is composed of two metal uprights and a flat, glossy base. The I/O layout’s placement on the upright’s top is unique, but it poses problems if you want to push the device closer to a wall. The panel includes DisplayPort 1.2 and HDMI 1.4 for video inputs, plus a 3.5mm jack for audio passthrough.

There are two USB slots with the AOC 27V2Q, but there are no built-in speakers since the thin chassis does not leave any space for them. You also have to live with beautiful, but limited stand since the monitor is not VESA-compatible.

The AOC 27V2Q features a 27-inch IPS panel with a 1920 x 1080 resolution, 75Hz refresh rate, and 5ms response time. A 250cd/m2 backlight is specified along with a 1000:1 typical contrast ratio which is usually found on budget-oriented models. The first complaint regarding this variant is the looser pixel density which isn’t great for gaming or editing by today’s standards.

However, the limited resolution makes the AOC 27V2Q ideal for almost every kind of use, including gaming. Larger pixel pitches make text easier to read despite the slight jaggedness, while smaller objects in games and movies will require less squinting. This kind of display is best used if comfort and safety during extended periods of use is a priority.

The AOC 27V2Q posts results which are superb for its bracket such as 99% sRGB coverage with a decent, color accuracy of DeltaE 2.6. The screen looks vibrant and balanced by default, so spending on a colorimeter to squeeze out some minor improvements isn’t practical. The only flaw revealed by testing is the 6-bit IPS panel’s inability to define minute changes in shades which isn’t dandy but shouldn’t affect daily use.

The IPS panel on the test unit of the AOC 27V2Q also showed great results, closely tracking the ideal 2.2 with minor deviations which will be unnoticeable in practice. The monitor’s contrast average of 950:1 is also reasonable for daily use. There are IPS monitors out there that are capable of 1200:1 more or less, but they are exponentially more costly than this affordable variant.

The reason why the AOC 27V2Q’s image output looks superb despite the minor errors in its other characteristics is its fantastic panel uniformity. There are weak light leaks at the corners, but the deviance in luminance stays within 7%. Color uniformity is also excellent since the variance does not exceed a DE of 1.6 from the D65 ideal standard.

You also get a few presets in the OSD, but most of them appear too cool or bluish like the default settings. Users need to select the User mode and access the color temps to reduce the blue spectrum slightly. It’s easy to find a perfect balance, so you don’t need the assistance (and extra cost) of a colorimeter for the AOC 27V2Q.

The AOC 27V2Q is a 75Hz monitor, so it is capable of offering a slightly improved performance in motion handling. There still are some noticeable blurs, so you need to turn to this model’s Overdrive feature in the OSD. We only recommend using the Medium setting since the final level is overkill and it adds overshoot to the images.

Finally, the AOC 27V2Q is a FreeSync monitor making it a perfect pair for an affordable AMD GPU. 1080p gaming on low refresh rate monitors doesn’t need a lot of help to stabilize the image, but having the VRR solution is handy for intense titles such as Battlefield V. Also, gamers will appreciate this monitor since it is virtually delay-free thanks to an input lag score that clocks in at a 10ms average.

Thoughts on the AOC 27V2Q

The AOC 27V2Q is a fantastic choice if you are looking for a display with superb imaging quality and sophisticated aesthetic. We love this monitor’s perfect mix of good looks and performance in a budget-friendly package, making it ideal for almost every type of user. You don’t get professional-grade, pinpoint accuracy, but the IPS panel’s output is decent enough for entry-level editing purposes.

The AOC 27V2Q’s compromises in features and functionality to meet the aesthetic design is the only aspect we dislike about it. Monitors are becoming thinner and bezel-free each year, but at the expense of crucial features such as ergonomics and built-ins. If you simply want an attractive monitor that doesn’t disappoint in the imaging department, the AOC 27V2Q is one of the best in its category.