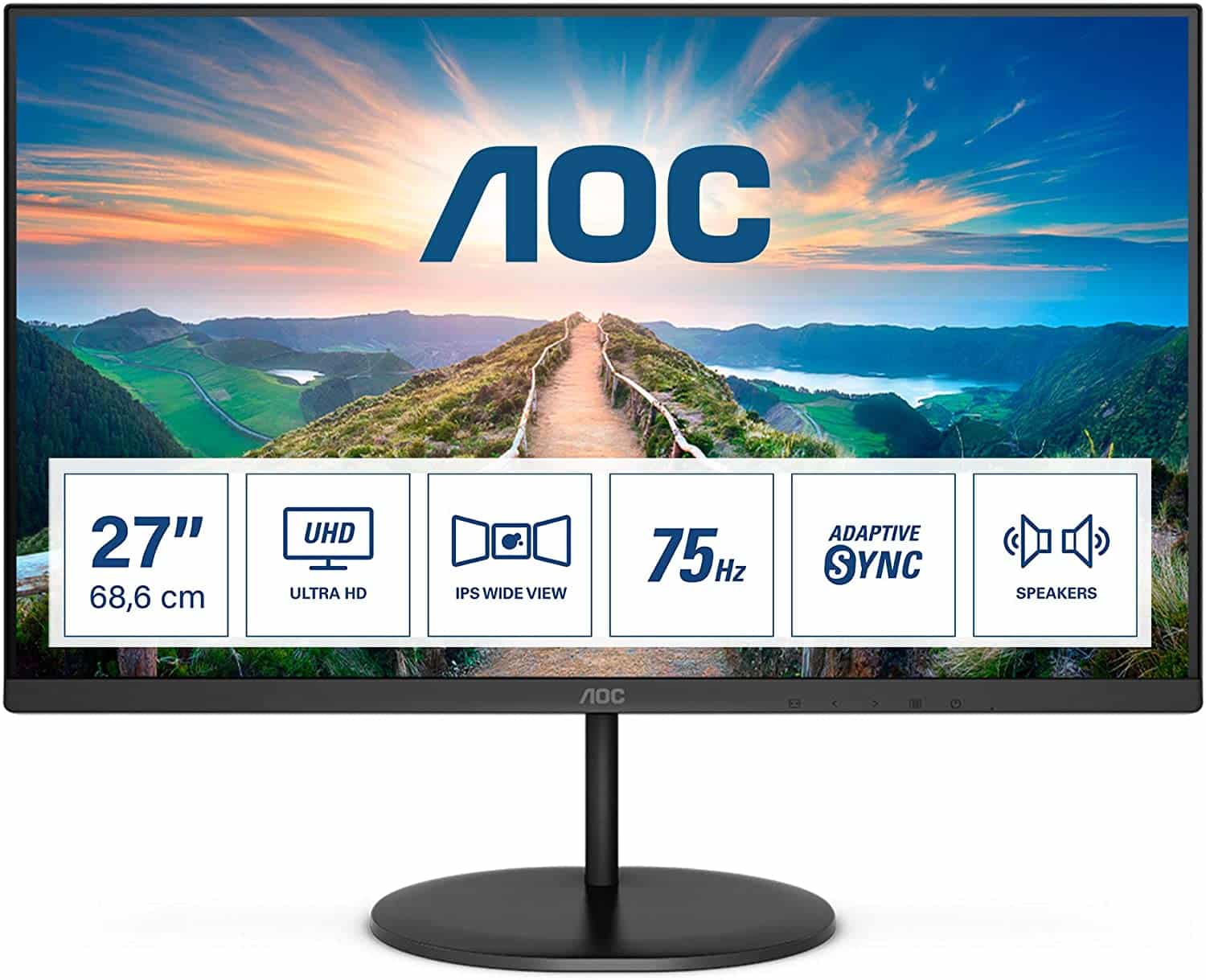 The AOC U27V4EA is a budget-conscious 4K monitor with an IPS panel that was designed for home and office use. It offers essential features for basic use in a slim and sleek package that looks more expensive than the actual price tag. Let’s check what the AOC U27V4EA can do to determine if it’s the new value king in the competitive 4K monitor bracket. 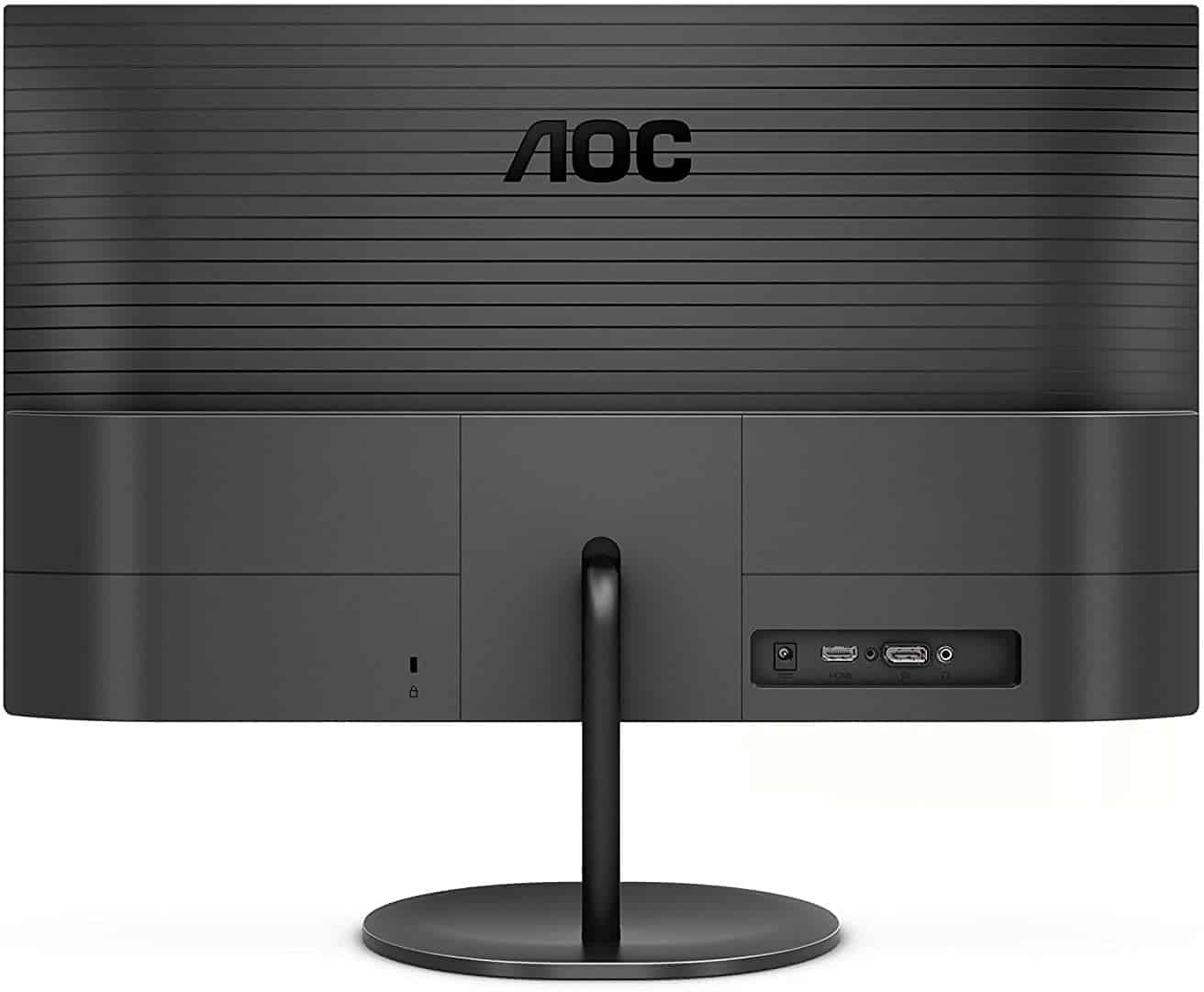 The AOC U27V4EA comes in an attractive and sleek form with its minimalist design comprised of a slim chassis and stand. The device has a timeless matte black aesthetic that will not clash with office or gaming setups. The display is bezel-free on three sides, but you will still see inner borders when its not in use.

The whole monitor’s dimensions are minimal, so most of the depth it requires when fully assembled is due to its circular base. However, it only needs 7.37 inches of depth and 24 inches of width, and that isn’t a lot by today’s standards. The U27V4EA weighs in at 11.31 pounds so it is reasonably portable and easy to move around.

Build quality for the AOC U27V4EA is acceptable even if it mostly uses plastics on its parts. There are no cosmetic defects or signs of weaknesses on any of its parts, so it should last you quite a while without breakage. The stand can wobble at times, but it only happens if you nudge the screen or press its buttons.

The AOC U27V4EA is a budget monitor with a 4K resolution, so it is understandable that it uses OSD buttons instead of joysticks. They are labeled and located under the bottom bezel so they are easy to access. However, the usual limitations are still there such as wrong inputs and it’s a bit more time-consuming if you haven’t memorized the specific functions.

The stand included with the AOC U27V4EA looks great, but it only offers tilt adjustments, unlike its more expensive competitors. Most will be okay with that, but the taller folk might need a few books or a monitor stand to prop it up higher. You can use VESA mounts, but be wary that they can be expensive if you pick the premium brands.

The AOC U27V4EA’s connectivity layout is simplified but it already includes everything you will need to utilize it. The layout includes a lone DisplayPort 1.2 slot along with two HDMI 2.0 ports which you can use for gaming consoles like the PS5. It’s not a gaming-specific solution, but it adds flexibility to a cheap option.

You also get a 3.5mm port and a pair of 2-watt speakers for basic audio purposes such as background music or conference calls. they sound tinny and they easily distort at high volumes, but they are usable for simple tasks. They also add more value to your purchase if you go with the AOC U27V4EA since other budget models do not include them to help meet low price points.

The AOC U27V4EA sports a 27-inch IPS panel with a 3840 x 2160 resolution, a 60Hz refresh rate, and a 4ms response time. The backlight has a 350 cd/m2 maximum while the contrast ratio is at 1000:1 like most IPS panels. Its QHD iteration, the AOC Q27V4EA is slightly faster with a 75Hz refresh rate, but this model is brighter and obviously sharper.

4K monitors at this size often receive feedback regarding legibility and visibility since small objects become too sharp. Its 163PPI can make reading more difficult for some users, so scaling, which doesn’t always work great, is necessary. It’s a different picture for games and movies since they look considerably better and crisper, provided that the native resolution is used.

The AOC U27V4EA renders 100% sRGB which is impressive for a monitor at this price range and more than enough for daily use. The default accuracy is great as well since the dE average was only at 1.97, meaning color errors won’t be noticeable to the naked eye. The IPS panel looks balanced and correctly saturated by default so it can be used right away as soon as you set a comfortable brightness level.

Calibrating the AOC U27V4EA improved its dE average to 1.03 which is something you’d see on a variant that’s twice the price. It irons out some of the very minor white balance issues, but it’s unnecessary for daily use. Colorimeters aren’t cheap if you compare them to the cost of this monitor, and they are only necessary if you work in editing and content creation.

Its backlight reached 355 cd/m2 at 100% so it can fight off glare even when it is used in a room with plenty of windows. However, the contrast ratio is limited to 923:1 at 50% brightness, so it can’t produce deep blacks. This is a common limitation on IPS panels, and only those with expensive HDR implementations or VA -based monitors can improve on it.

The worst aspect of the AOC U27V4EA sample was its panel uniformity due to considerable backlight light bleeding. The screen showed noticeable clouding issues which can be distracting while working or gaming. Thankfully, this isn’t permanent on all U27V4EAs due to the nature of IPS technology and some manufacturing tolerances.

The AOC U27V4EA wasn’t meant for gaming but its motion handling is decent for a 60Hz monitor. using its overdrive is essential to this, but we don’t recommend maxing it out since overshoot will start to appear. Most of the blurring shows up in contrasting transitions, but gamers who play casual or immersive titles won’t notice them most of the time.

The AOC U27V4EA is compatible with FreeSync but it doesn’t work with Nvidia’s G-Sync Compatible mode. This is common with many budget 4K monitors, but it can be fixed by driver updates at some point. Input lag sits at 10ms at 60Hz so delays won’t be a problem even if you play FPS shooters on your PC and gaming console.

Thoughts on the AOC U27V4EA

The AOC U27V4EA is a practical choice for users who want a crisp screen with tons of space to work or play around with. Its IPS panel offers great color performance and plenty of brightness for the price. It also looks attractive compared to other pudgy budget models, but you will be missing some key features like ergonomics with this model.

These omissions on the AOC U27V4EA’s specs are also its main flaw aside from the uniformity issues and low contrast. The latter is natural for many IPS monitors, but the lack of adjustability or modern ports can be deal-breakers in today’s market. however, it’s still a fantastic choice since it brings 4K closer to the masses with its superbly low price.