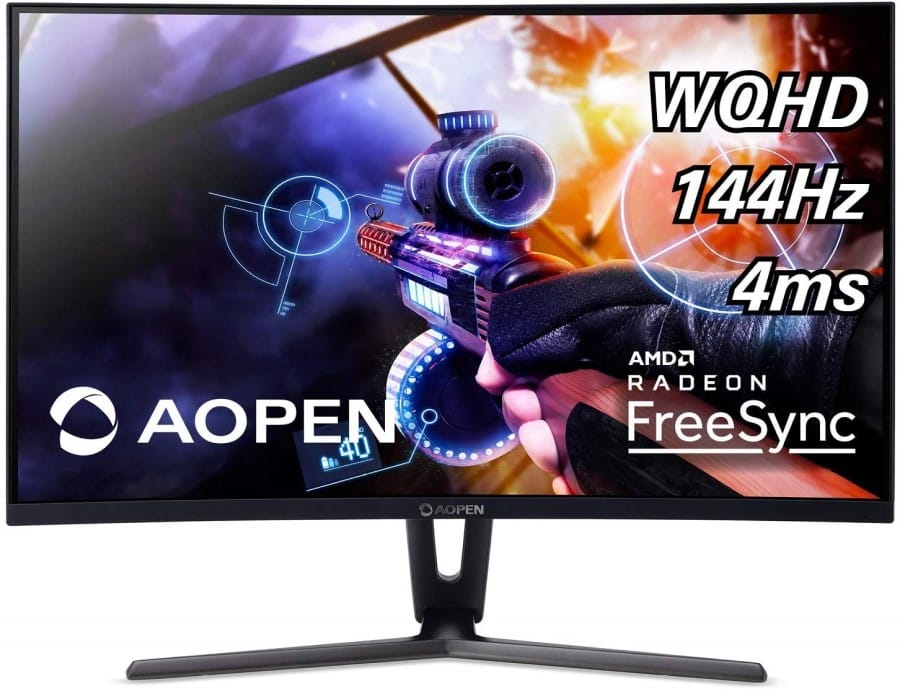 The AOPEN 32HC1QUR is an underrated newcomer in the gaming monitor business that offers a curved, high-refresh QHD screen. AOPEN is new to this competitive market, but the Taiwanese company has already made a name in the digital solutions business around the globe. Let’s see if the AOPEN 32HC1QUR can deliver when it comes to pure gaming performance and elevate the brand’s status. 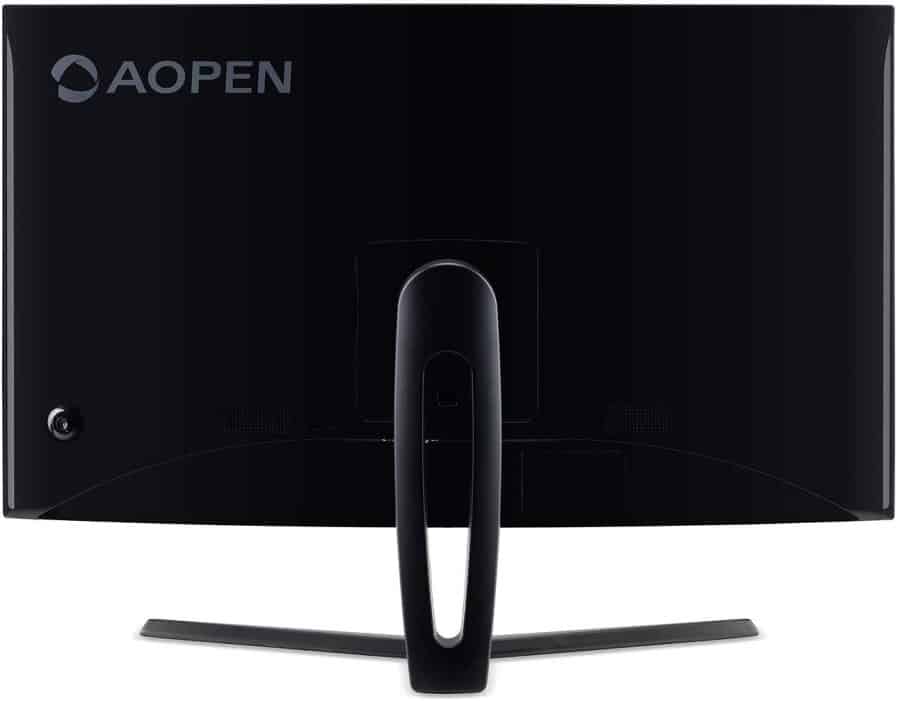 What’s great about the AOPEN 32HC1QUR is it doesn’t look like a budget monitor from a new or underdog company. The matte black on the front of the chassis has a nice sleek look and feel, plus it doesn’t attract dust or fingerprints. The backside is a different story since its glossy, so extra care is needed if you want your unit to look new.

The display area is also bezel-free except for the bottom, but you will still see panel borders when the display is in use. This model is an excellent choice if you want a triple monitor setup for extreme immersion in racing or flight sims.

Build quality for the AOPEN 32HC1QUR is comparable to the many of the offerings we’ve tested from established brands. This goes to show that AOPEN does not cheap out on their products, and its a good sign that they will be very competitive. There is no disturbing wobble on the monitor, so it should stand firm on your desk once assembled.

It’s also worth noting that the AOPEN 32HC1QUR will not eat up a lot of depth on your desk. The device only needs a little over eight inches of depth, so you can place a full-sized keyboard with a wrist rest plus other gear in between without issue. We did find it worrying that the monitor was so light, but it wasn’t an indication of poor material selection in this case.

The stand included with the AOPEN 32HC1QUR is good enough to hold it in place, but it would be nice if it had more heft. However, its biggest issue would be its tilt-only mechanism which severely limits your setup options. Swiveling and pivoting are unusable for curved monitors, but height adjustment is always crucial due to different heights between users.

Thankfully, the AOPEN 32HC1QUR is VESA compatible via its bolt pattern concealed behind the stand’s connector. It’s easy to find an armature that will accommodate this monitor since it’s so light, but that adds to the cost of the whole upgrade. You might be better off with a more ergonomic monitor if you think tilting the display isn’t enough.

The connectivity suite on the AOPEN 32HC1QUR isn’t the best we’ve seen, but it includes everything you need for a typical gaming setup. The DisplayPort 1.2 connector should handle your PC, while the HDMI 2.0 takes care of gaming consoles like the Xbox One X. There is also a DVI-DL and 3.5mm jack on the device, but there are no speakers and USB slots included.

The AOPEN 32HC1QUR boasts a 32-inch curved VA panel with a 2560 x 1440 resolution, 144Hz refresh rate, and 4ms response time. The backlight is slightly lower than we’d like at 250 cd/m2, but the 3000:1 contrast ratio is one of the product’s main attractions. This model’s specifications are comparable to the Viotek GN32LD, but we like the minimalist look better.

The pixel density on 32-inch 1440p monitors like the AOPEN 32HC1QUR is comparable to a 1080p screen at 24 inches. Its less crisp than on the more common 27-inch variants, but you still get more pixels with a display like this. The extra details are still there, but image softening can sometimes become noticeable, especially when viewing lower resolution images or video.

The AOPEN 32HC1QUR posts decent imaging scores, starting with 100% sRGB and around 85% Adobe RGB coverage. Color accuracy out of the box sits at Delta 2.3, so there is no need to calibrate the monitor unless you need it for photo editing. Color temperature is slightly lower than the 6500K point, adding a blush to the output.

The contrast on the AOPEN 32HC1QUR reached a maximum of 1800:1 while gamma is slightly off at 2.3. These aren’t the best scores we’ve seen, but the display still offers deep blacks and well-defined color separation. AOPEN got it right for the monitor’s main purpose, but for editing use, there are better options.

Panel uniformity is the AOPEN 32HC1QUR’s weakest link since the sample had some bleeding on the top and upper corners. Color uniformity was not affected at a noticeable scale, but blacks and darker images will have some clouding. This flaw could vary between unit to unit, and its most likely caused by the curvature more than the quality of the panel.

The AOPEN 32HC1QUR is a VA monitor so it has a slower pixel response time compared to TN and some IPS models. We saw a bit of ghosting in fast-paced sequences and when colors drastically change from dark to light. Its not on a disturbing level, but seasoned players will likely go with another panel type instead.

The AOPEN 32HC1QUR is a FreeSync gaming monitor, but it also works with G-Sync compatibility mode. It’s not one of the certified models, so you have to activate it manually via the OSD and Nvidia Control Panel. Input lag sits at around 7ms at 144Hz, so you won’t feel any delays or “de-synced” instances.

Thoughts on the AOPEN 32HC1QUR

The AOPEN 32HC1QUR is an excellent choice if you are less concerned about minor imperfections. What’s most fantastic about it is it’s inexpensive, making 144Hz 1440p which is the current medium for enthusiast gaming easy to own. We love the design, but it lacks a few creature comforts that many will need with a monitor of this size.

On the other hand, you should consider that this model is still prone to blurring since its a VA panel and light bleed due to the curve. It’s crucial that you buy from a seller that has flexible return terms, so you can try for a better unit if the latter issues persist.