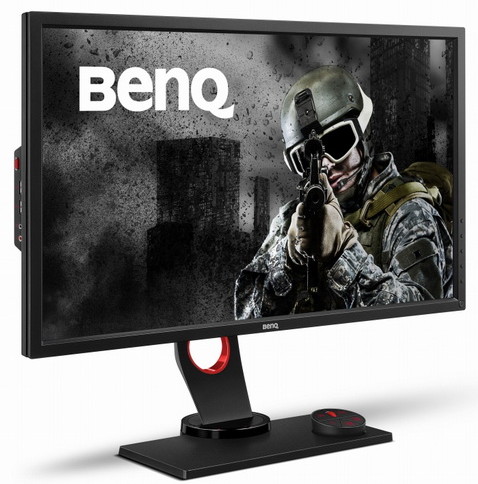 The BenQ XL2730Z is a 144hz display with 2560×1440 ( 1440p monitor ) resolution. It is based on a TN panel with 8-bit color depth and a 1ms response time. The specs on this gaming monitor make it a direct competitor to the G-Sync ready ASUS ROG Swift PG278Q but a bit cheaper which is great news for AMD graphics card users. Well, it may not have the bold industrial design found on the Swift that makes it look like the bastard child of Peabody and Atlas from Portal 2. But BenQ chucks up a modern style of their own and I rather like the simplistic design of the stand which features tilt, swivel, height and 90-degree pan adjustment. At 18mm thick the bezel could be slimmer, but it is still fit enough to run a triple set up without much visibility gap.
On the right side is your power button and buttons for the on-screen display, though BenQ includes a wired controller for easier navigation which works like a charm. Although you can place the controller in the shallow cup holder thing being able to physically secure the unit to the base would have been a nice touch as my mouse and keyboard cables were quick to knock it out of place.

Most gamers including myself will rejoice at the monitor’s non-reflective matte screen. On the left side is a headset holder, two USB 3 ports running on a built-in hub, mic- and headphone jacks. You also get a sturdy carrying handle at the top of the stand making this panel an ideal choice for LAN parties. On the underbelly of the display is an upstream port for your USB hub and a plethora of video inputs including D-Sub display port which is what you’ll need to take advantage of the Free-Sync. There are also two HDMI ports, one of which is 2.0 and dual-link DVI. Other than those it also includes a mini USB port for connecting that OSD controller, a microphone pass-through if you won’t be having your audio signal carried via HDMI or DisplayPort. And quick release button for removing your panel if you wish to toss the stand aside and use the built-in VESA monitor mount for wall mounting or another stand of your choice. Additionally, you can keep greedy thieves at bay by locking down your panel with a Kensington lock when attending public LAN events. 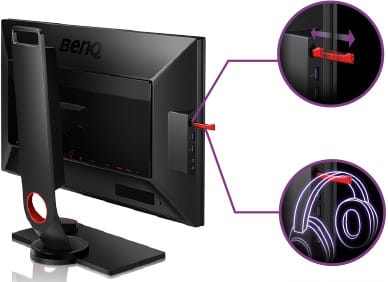 So far this panel this is intriguing, but the real question here is how does it perform with day-to-day tasks and more importantly gaming? The TN panel and 72% NTSC color gamut support put the color range of this bad boy fairly close to old IPS monitors. The just ok viewing angle is what you might expect from a TN and with some fine tuning in the OSD, the contrast ratio looks great and offers enough granularity between blacks and whites during low-light scenes. To truly see the monitor at its best, get into a fast-paced action game with Free-Sync enabled and you get nothing but super sharp visuals with no tearing, stuttering or visible tracing of any kind. That makes my older IPS panel look like a blurry mess in comparison and difficult to go back to once I got used to the BenQ XL2730Z. 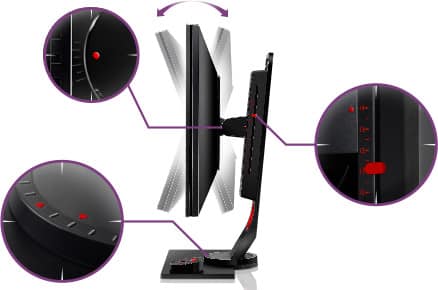 The monitor supports a generous refresh rate window from 40 to 144 hertz, meaning you’ll maintain that crispy smooth gameplay as long as your framerate stays within that range. Typically what tends to happen if your frame rate ventures outside of those parameters are that the image begins to generate an unpleasant flickering effect on screen. AMD combats this issue by giving users the option to enable or disable V-Sync while Free-Sync is active with each option bearing its symptoms. Enabling V-Sync opens the door for some potential lag while disabling V-Sync introduces some screen tearing. Now, just because I didn’t run into either of these issues during my testing, it doesn’t mean you won’t. So my advice is if you’re experiencing these problems frequently, to adjust your in-game quality setting so that you rarely ever dip below 40 FPS. In that way, you can make sure that the variable refresh rate on this panel delivers ultra-fast performance that breathes new life into your games especially when it comes to those adrenaline-pumping first-person shooters.
I wouldn’t recommend the XL2730Z for things like color grading or photo editing. AMD graphics users who are serious about gaming will find that picking up this Free-Sync display is one of the best upgrades you can make to your gaming experience without cracking open your actual PC.

Note: The BenQ XL2730Z has been discontinued by the company but will soon be replaced with a new and improved model. Stay tuned!