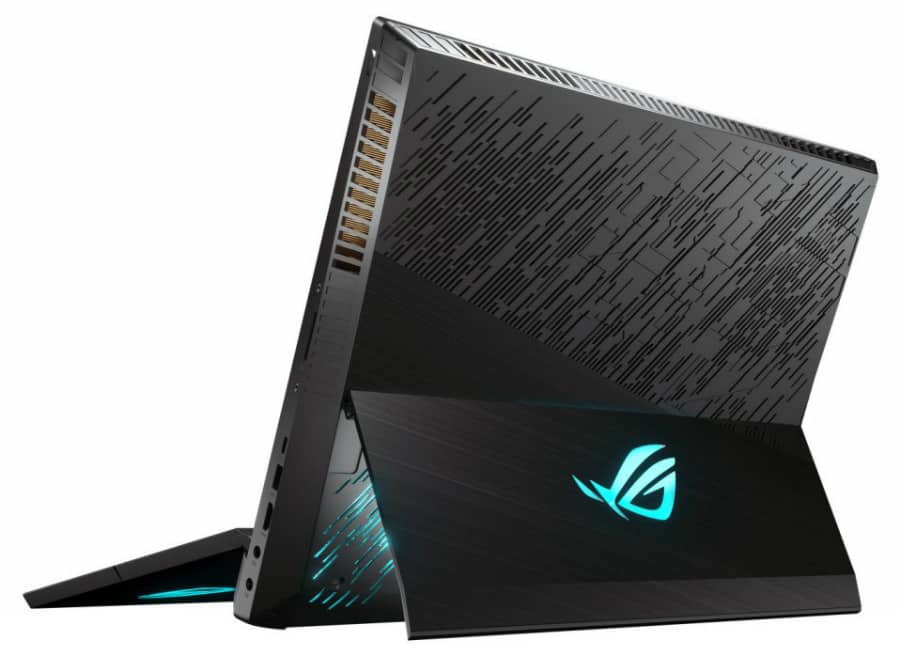 The recently revealed CES 2019 gaming laptops can be considered as game changers in a category where offerings have become stagnant in the past few years. We’ve seen some marvelous products such as the Acer Predator X21, but they aren’t as accessible to the masses. Previous offerings are mostly one and the same, with thin and light models prone to overheating while full-sized variants are still too bulky.

CES 2019 gaming laptops are looking to change that with fresh and impressive redesigns that will breathe life into the genre. These premium gadgets have once again become innovative and should be able to convince gamers on the go to invest in these awesome creations. Laptops aren’t as convincing as a full desktop build with an enthusiast-grade gaming monitor, but these options might make you change your mind.

CES 2019 has shown us a peek of what’s to come such as OLED laptops, but these exciting new models are our favorite show stealers:

The Alienware Area-51M is our favorite CES 2019 gaming laptop because it solves the gadget’s deal-breaking factor. This new model from Dell breaks the norm by offering an upgradable platform which you can update once new hardware becomes available. The hot-swappable aspect isn’t limited to storage and ram since you can also upgrade the desktop-grade processor and the GPU.

The Alienware Area-51M will be available with up to an Intel Core i9-9900K and an Nvidia GeForce RTX 2080 which won’t need upgrading any time soon. However, the premise of a laptop like this is you get to keep it for as long as it still works and to limit your spending to upgrading the CPU and the GPU to save the extra cost of a whole new device.

The design is equally mesmerizing, from the mapped out screws for the swappable hardware all the way to the RGB ring at the rear. The Alienware Area 51M will start shipping by January 21 starting at a $2549 MSRP. More affordable configurations will follow shortly, so stay tuned. 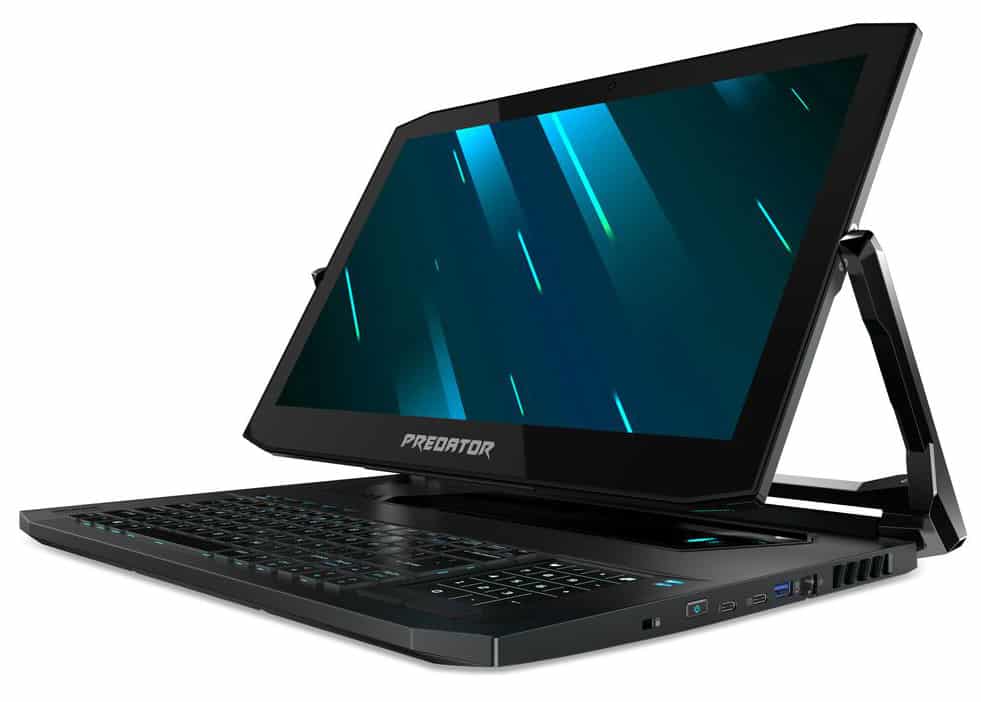 The Acer Predator Trion 900 changes the laptop gaming by offering a 4-way convertible display called the Ezel Aero Hinge. This CES 2019 gaming laptop is essentially similar to a 2-in-1, but it allows more flexibility for the display. The hinge’s design will allow gamers to utilize the standard laptop mode, easel mode, tablet mode, and a screen flipped in reverse.

Of course, the meat inside the device is impressive as well, packing a punch for the latest games. The Acer Predator Triton 900 offers Intel Coffee Lake processors, NVMe PCIe SSDs in RAID0, and up to 32GB of DDR4 memory. The GPU used is, of course, Nvidia’s RTX 2080 which offers impressive graphical power along with decent performance in Ray Tracing scenarios.

This 4K IPS gaming laptop is scheduled to become available by March 2019 with a price that starts at $4000. It’s expensive, but it’s not eight-grand expensive like the X21. 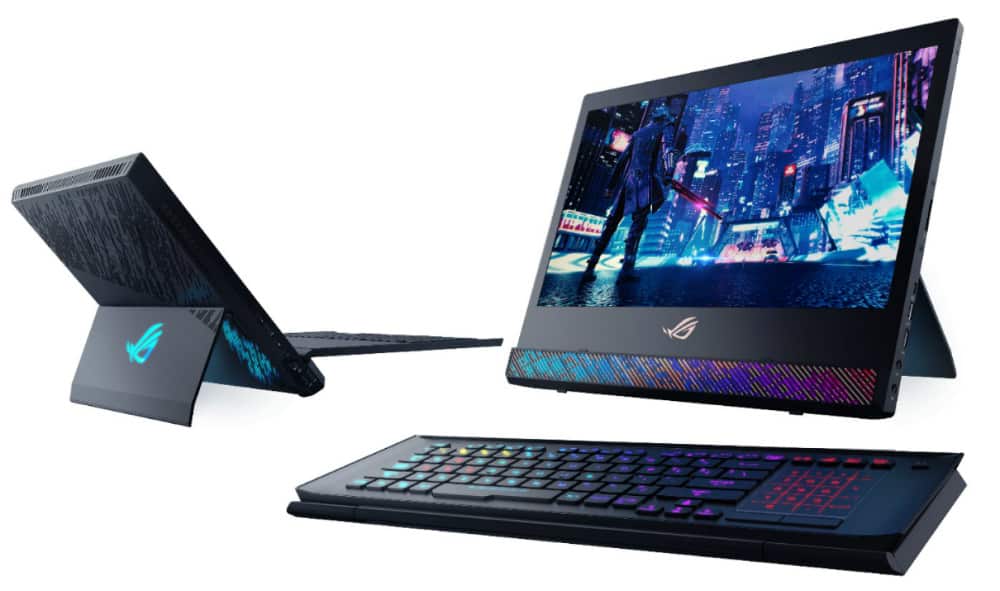 Asus has replaced its Zephyrus line as the flagship with the big and bold Asus ROG Mothership that will revolutionize the meaning of top of the line. This new gaming model is more like a desktop replacement since it can replace AIOs and gadgets like the Microsoft Surface Pro. It packs a few surprises, such as a detachable wireless keyboard that can fold in half if you need the space.

The Asus ROG Mothership can also be compared to a tablet since most of the hardware is in the upper half where the 144Hz screen sits, unlike conventional laptops. All of the components and ports can be located on the display’s CNC aluminum chassis without ruining its flexibility. This CES 2019 gaming laptop comes with the latest hardware such as an overclockable Core i9-8950HK and the Ray Tracing-enabled RTX 2080.

The Asus ROG mothership also sports upgraded cooling like the rest of the products in this lineup to cure the neverending issue of high thermals. Pricing and availability is still forthcoming, so keep watching this space for more information. 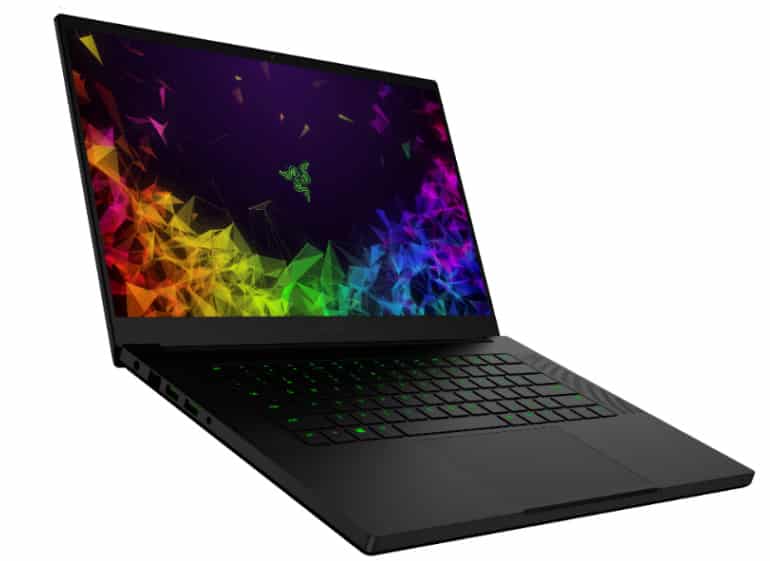 The Razer Blade is one of the more attractive options in the market since it’s basically a MacBook on steroids. This CNC Aluminum-clad gaming laptop gets upgraded into what Razer calls the Blade Advanced. This new model will be available with the new GeForce RTX 2060, 2070 Max-Q, and the RTX 2080 Max-Q as well as a 144Hz or 4K touch display. The minimalist design is retained but the chassis’s profile gets reduced to .70 inches from last year’s .78 inches, making this the most portable option in the bunch.

The Razer Blade Advanced’s keyboard gets upgraded as well with a Per Key Chroma lighting for maximized customization. The only downside is the storage gets nerfed to a single bay instead of dual, leaving less room for more SSDs. The Razer Blade Advanced will start availability by January 29 with a starting price of $2300.

Lenovo is picking up its thin and light gaming line with the Legion 15-inch Legion Y540 and the 17-inch Y740. The smaller model starts at just $930, offering a super-slim frame that competes with the likes of the MacBook Pro. Specifications aren’t final as per Lenovo at CES 2019, but we’re expecting to see E-Sports ready configurations with Nvidia and AMD midrange GPUs.

The Lenovo Legion Y740, on the other hand, sports an RGB-stylized version of the Y540 and upgraded flagship-level specs for the meticulous gamer. This series gets a 144Hz G-Sync screen with GPU options all the way up to the RTX 2080 Max-Q. This super slim device also includes Dolby Vision compatibility via its 500-nit screen and Dolby Atmos audio.

The Lenovo Legion Y540 and Legion Y740 is scheduled for release by February of this year with $930 and $1749 SRP respectively. Expect more updates on specifications and available configurations as the launch date draws near. 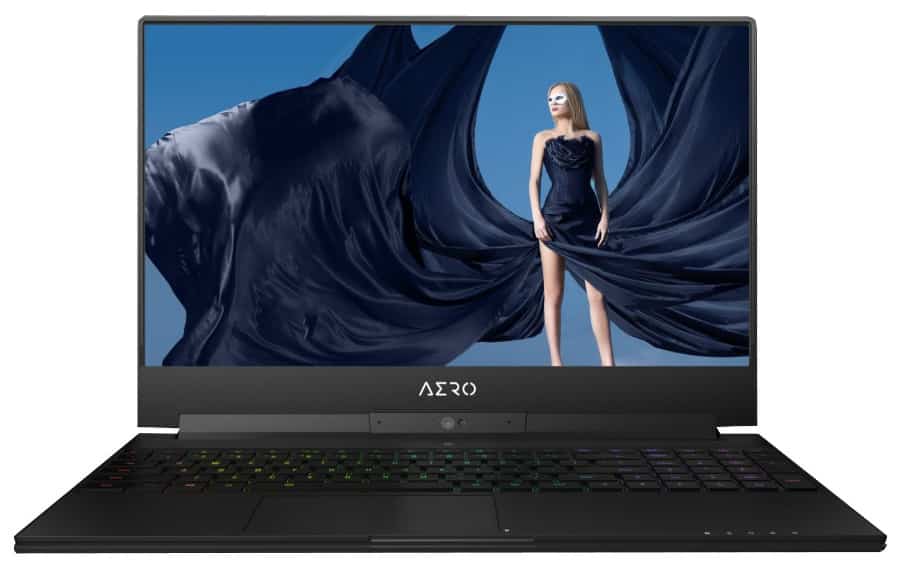 The Gigabyte Aero 15-X9 and Aero 15 Y-19 are advanced successors to the well-loved Aero X series of super slim monitors with amazingly accurate IPS screens. The new models boast chart-topping specifications that include up to an Intel Core i9-8950K processor and up to an RTX 2070 (X9) and RTX 2080 (Y-9)GPU. Both devices are part of the slimmest offerings we’ve seen this year, continuing the tradition of the product line that we have come to love.

What makes the Gigabyte Aero1 15-X9 remarkable is it includes an X-Rite Pantone calibrated display for superb color accuracy and fidelity. The Aero 15-Y9, on the other hand, pushes gaming performance to the extreme with Microsoft’s Azure AI technology to balance efficiency and performance as needed. Both laptops are the next best choices for design professionals who dabble in color grading and editing while gaming hard after the job is done. 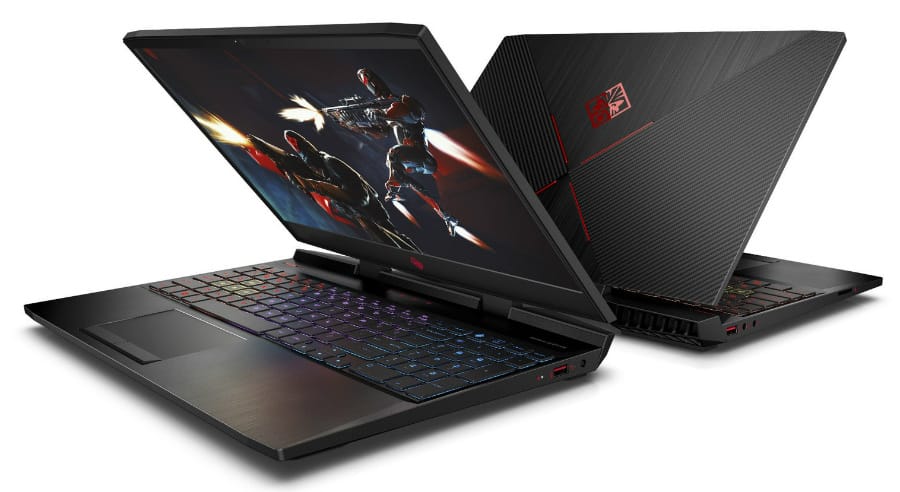 The HP Omen 2019 is one of the most typical-looking in the lineup, but its secret weapon lies in its juicy screen. This latest offering is the first to offer a 240Hz refresh rate for top of the line E-Sports performance on the go. The innards will include Intel’s 8th generation processors and up to an RTX 2070 GPU for extreme frame rates in games like CSGO.

The HP Omen 15 gets a redesign that isn’t limited to aesthetics, but in the functionality department as well. The CES 2019 gaming laptops Wi-Fi module can be upgraded to Wi-Fi 6 or more specifically, the 80211.ax standard for improved multi-client connectivity. The RAM and SSD/HDD bays are designed to be accessed easily, so upgrading becomes more convenient without voiding warranties.

The HP Omen 15 240Hz gaming laptop will become available for order by July 2019. Non-240Hz versions will ship as early as February, with prices starting at $1369.99 for the base model. 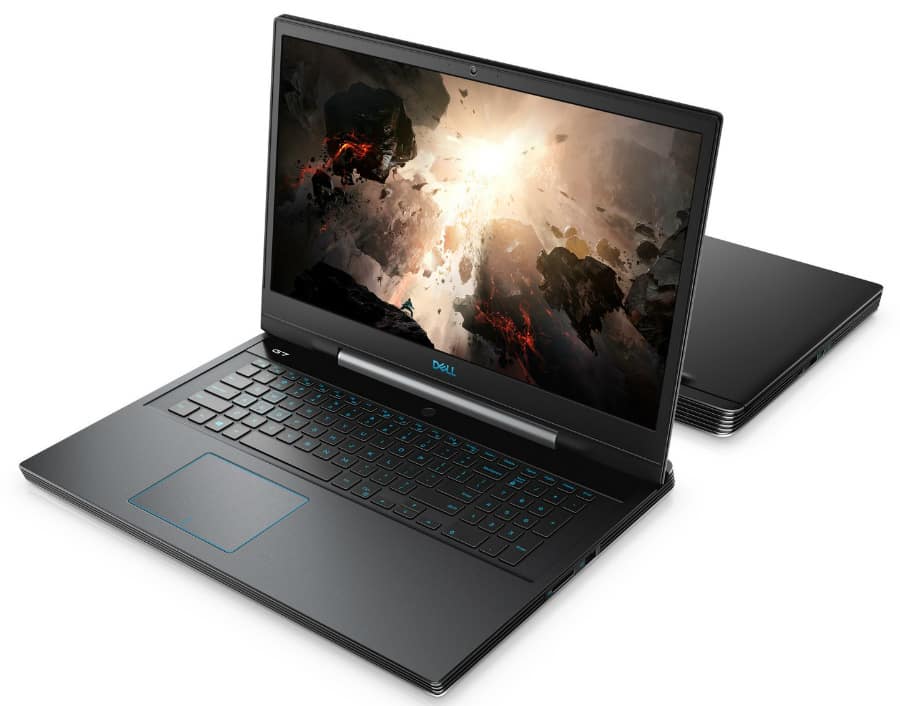 The Dell G5 and G7 gaming laptops were a hit last year due to their amazing value and performance that did not cost an arm, a leg, and a kidney. These value gaming laptops are getting refreshed this year with internals upgrading to Intel’s  8th Generation CPUs and up to an Nvidia RTX 2080 Max-Q. Most variants will ship with 144Hz FHD screens, but what’s fantastic is the option to upgrade the laptop with a 4K OLED display (G7 only).

Both gaming laptops share the same specifications package except for the G5 ‘s screen which is limited to a 60Hz 4K panel. But what both variants share is the choice to get a dual-drive configuration that will include a 1TB SSD and a 2TB HDD for maximized storage and a modernized connectivity layout that includes USB-C Thunderbolt 3. The Dell G5 and G7 will retain the $999 starting price and will begin selling by the 29th of this month.

Editor’s Note: Stay tuned for more updates on CES 2019 Gaming Laptops as the event unfolds. We will add the latest information as they become available!