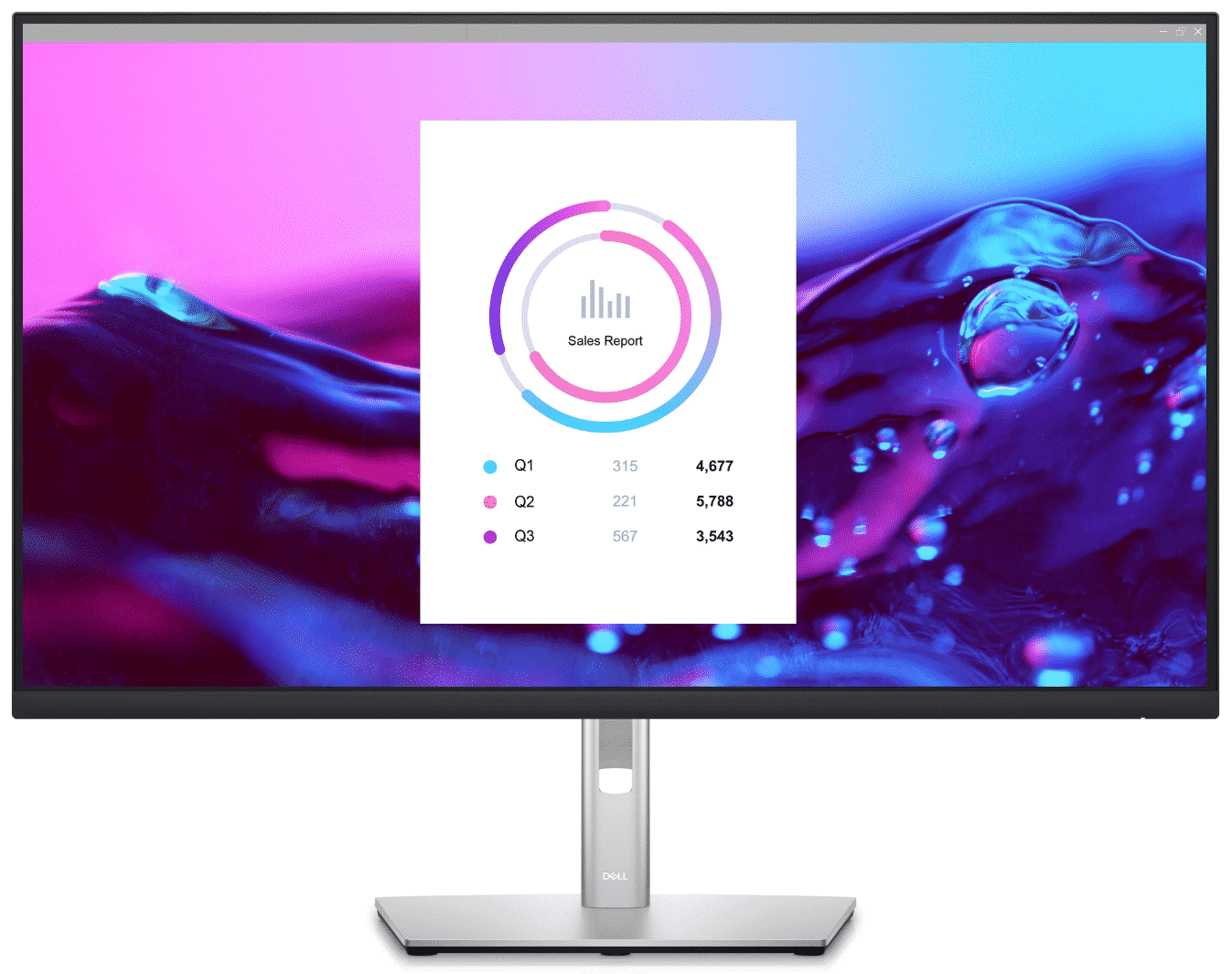 The Dell P3222QE is a premium business display with a spacious 4K screen and plenty of features to suit your needs for productivity. It’s labeled as a docking monitor, meaning it has a multitude of connectivity ports like USB-C for your modern devices. However, it’s quite expensive, so testing and scrutiny for the Dell P3222QE is a must before pulling the trigger. 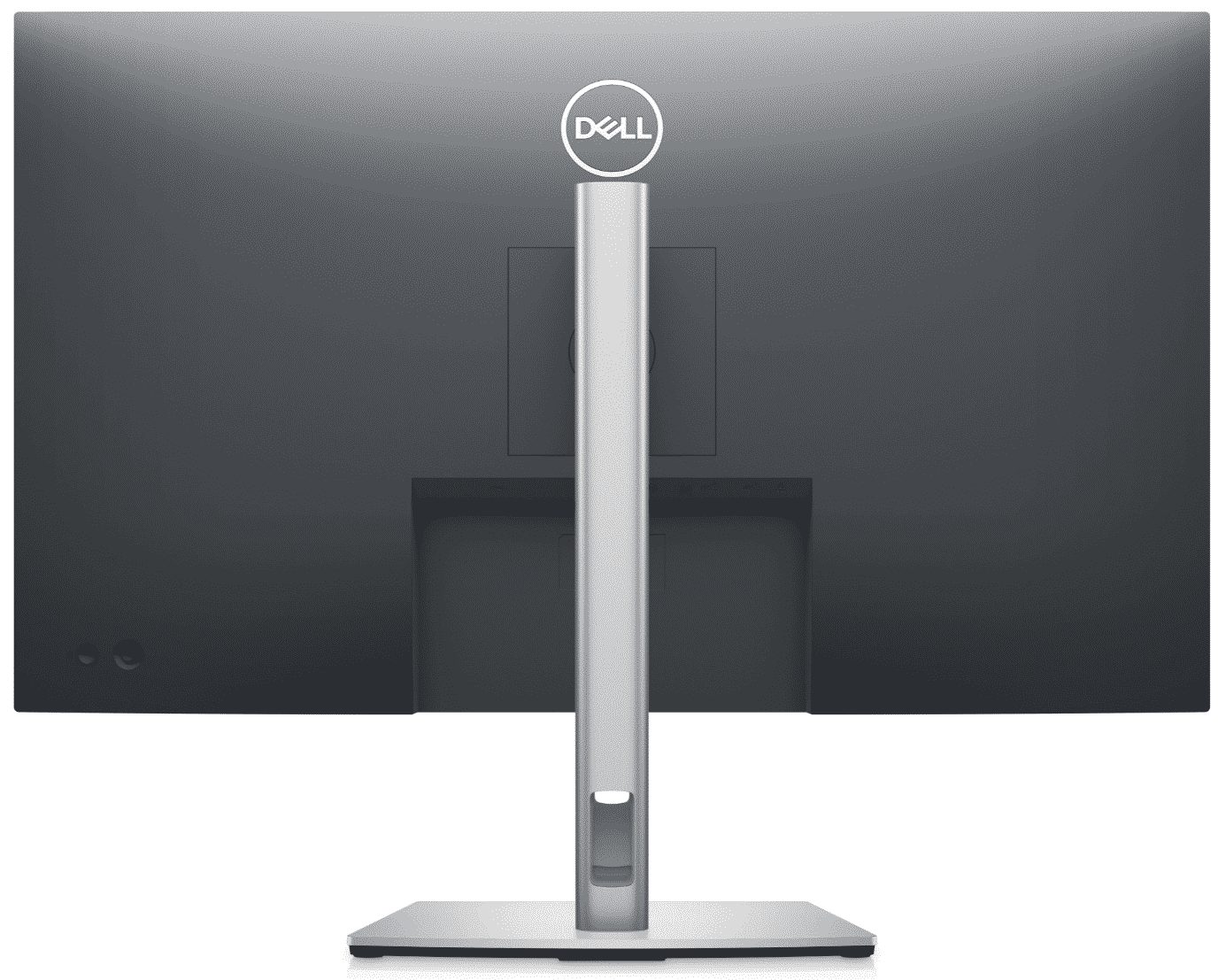 The Dell P3222QE still has the signature aesthetic of the brand, but in a more modern and sophisticated taste that is sleeker than its predecessors. It has an attractive matte black chassis mated to a silver metal stand, making it suitable for workstations or high-end studios. The display is bezel-free on three sides, although you will still see thin inner borders if you look close enough.

It’s not the largest display we’ve seen in recent times, but you do have to remember that the Dell P3222QE is still a 32-inch monitor. Its width can interfere with bookshelf speakers if you have some so some rearrangement might be necessary. It doesn’t weigh a lot at slightly under 12 pounds, so those with glass desks shouldn’t worry if this is an upsized variant.

Its build quality is also great, so you don’t have to worry about getting a fragile monitor at a high price point. the plastic panels are thick and sturdy, plus they are precisely molded so there are no cosmetic defects or gaps in the seams. The stand is fully capable of holding the display up without any wobbling which can be disturbing while you are working.

The Dell P3222QE’s features can be controlled via a single joystick at the back near the bottom corner of the housing. Couple it with a well-laid out OSD and you get a convenient and efficient system for calibration or switching between the monitor’s features. It’s also compatible with Dell Display Manager which has several presets and an auto-restore feature that lets you pick up where you left off.

The Dell P3222QE has plenty of connectivity options, starting with its DisplayPort 1.4 and HDMI 2.0 port for video inputs. You also get four USB 3.2 Gen.1 ports for fast transfers, along with an RJ45 port for network management. However, the obvious highlight here is the USB-C slot which supports DP Alt Mode, allowing USB-C laptop owners to use it as a single cable solution for video inputs and charging.

However, it’s limited to 65 watts, so it might not be able to charge the more powerful workstation laptops while they are in use. 65 watts is enough for notebooks and some light tasks like office work, but those who use heavy apps might not get sufficient charging. Dell should have pushed for 90 watts, but that’s the main feature of their upper-tier models.

The Dell P3222QE also doesn’t have speakers, which we think is unfair considering the price of this monitor. it’s designed to utilize Dell’s mini soundbar that attaches under the bottom bezel, but that’s a separate purchase. To be honest, built-in speakers are more important to us now since work-from-home arrangements are now more common than ever.

The Dell P3222QE sports a 32-inch IPS panel with a 3840 x 2160 resolution, a 60Hz refresh rate, and a 5ms fast response time. The backlight has a 350 cd/m2 maximum while the contrast ratio is listed at 1000:1 like most IPS panels. This model doesn’t have special features like HDR certification since it focuses on productivity and business use more than anything.

4K is easier on the eyes at 32 inches since it’s not too sharp, so you won’t find yourself squinting at tiny letters when processing a document. However, you still retain the extra pixels and the enlarged visual space which are nice to have if you are multitasking or editing. Games will look better no questions asked, although you will need a more powerful GPU to keep your framerate consistent.

The Dell P3222QE renders 120% sRGB and 90% DCI-P3 which is great for daily use and entertainment, plus beyond its modest 99% claim. Default accuracy has a deltaE average of 1.97 which is already good enough for most users. the screen looks balanced and vibrant, so most users can get away with only a few minor tweaks.

Calibrating the Dell P3222QE with a colorimeter lowered its dE average to a fantastic 0.71 which puts it in editing monitor territory. However, colorimeters aren’t always accessible and they are quite expensive for most users. It is only necessary if you are into editing and content creation or if you already have one on hand.

Its backlight only managed 341 cd/m2, but that’s already sufficient for most uses most wouldn’t feel comfortable at anything over 200 cd/m2. This monitor has an excellent contrast ratio of 1289:1 at 60% brightness as far as IPS monitors are concerned. However, it’s not capable of deeper blacks like VA panels, so dark scenes can look washed out when viewed at night.

Panel uniformity for the Dell P3222QE sample was great since there were no major backlight leaks on the screen’s edges. There are some clouding issues on the top edge of the screen, but it only becomes slightly noticeable in full black images. Take note that this aspect varies between every monitor made, so there are better and worse units out there.

The Dell P3222QE has a decent response time even if it wasn’t designed for gaming and its limited to 60Hz. You have to set its overdrive to its Fast setting to get this, although there will still be some persistence in fast-paced scenes. Maxing out the overdrive will not help since it will induce overshoot which is worse than the minor smudges in the first place.

The Dell P3222QE isn’t compatible with FreeSync and G-Sync, but that’s understandable since it’s a productivity monitor. it will still work great with games, but you need a powerful GPU or a newer console to get a stable framerate. Input lag sits at 10ms at 60Hz, so it won’t feel sluggish or delayed even while you play your favorite titles.

Thoughts on the Dell P3222QE

The Dell P3222QE is an excellent monitor if you want a large 4K screen for extra space along with excellent color quality. Its default output is already good enough for regular use, but calibrating it pushes it into prosumer category. It has plenty of useful features, although we don’t like the fact that you have to spend extra to get a pair of speakers.

The Dell P3222QE is great as an all-arounder, but it does have its limitations such as no Adaptive-Sync support and its 65-watt charging. The Dell U3219Q which is more or less the same monitor can be had for less, although it is not as available now since it’s a 2019 model. Overall, it’s a decent buy, but there are more capable monitors out there like Dell’s Collaboration monitors that include a more capable 4K variant.