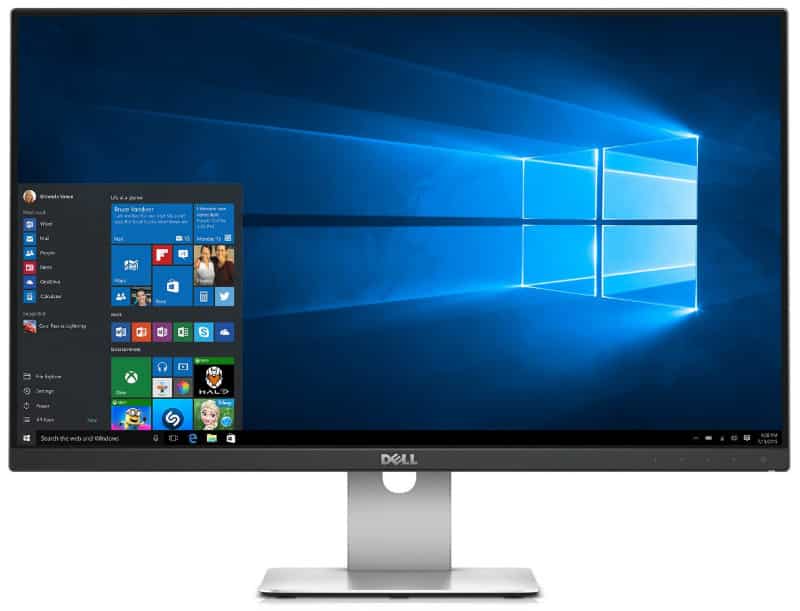 Let’s take a look at one of the best IPS gaming monitors you can get for under $200, the Dell S2415H. You guessed it, a 23.8-inch monitor from Dell. Let us start off by getting the specs out of the way. It is an AH-IPS Panel with a resolution that comes in the standard 1080p, 16:9 aspect ratio. It has got a decent response time of 6 milliseconds, typical 60-hertz refresh rate, WLED Backlighting, 1000:1 contrast ratio and about 250 cd/m2 of maximum brightness, so it is very bright.

So getting on with ports the side houses a 3.5 mm headphone jack, and the back contains one HDMI, VGA, AC Power and 3.5 mm input, and nice addition it comes with Stereo Downfiring 3-watts speakers. It is not dual HDMI, but that should be a big deal for most. In the box you will get an HDMI cable something most monitors at this price does not come with, an AC Power cord with an external power brick. After some simple assembly, I had my monitor hooked up to my Macbook Air.
The thing that sets this monitor apart from a lot of current monitors is that it has a glossy screen finish rather than a matte one which has its advantages and disadvantages. Glossy finish is well glossy. You can easily see reflections when the screen is off as if it were a dark mirror. And turning the display on removes most of the reflections but primary light sources are still easily seen on the screen. That being said it depends on where the light is in your room. The only time I have issues with this is when filming videos. I have to position the monitor, light and camera to prevent any noticeable reflections.

So why to go with a display that produces a ton of glare when you could just use a matte screen that decreases all the light. Well, the question is quality. Matte screens can wash out colors, reduce detail and so on. I almost guarantee you that if you put a glossy monitor next to matte one, 99% of people would say the glossy one looks better. At the end of the day, it depends on what you are going to need more. Getting on to the next thing I love about this monitor is the design. A lot of monitors claimed to have zero bezels and well to my knowledge those are all bogus claims including this one. That is the closest I have seen a screen come to it. Using a ruler, it looks about 5 mm which is insanely thin, most of the monitors having bezels at least two times larger. The near edge of edge panel just adds to a very enjoyable experience, and it looks pretty dope, similar to the Dell XPS15. The stand is a solid gray plastic that looks like metal, and it snaps easily into the back and is pretty stable although it does tend to shake a bit when pressing the buttons to change settings. It is still only so that could be an issue for some. But it is VESA monitor mount compatible with a converter. 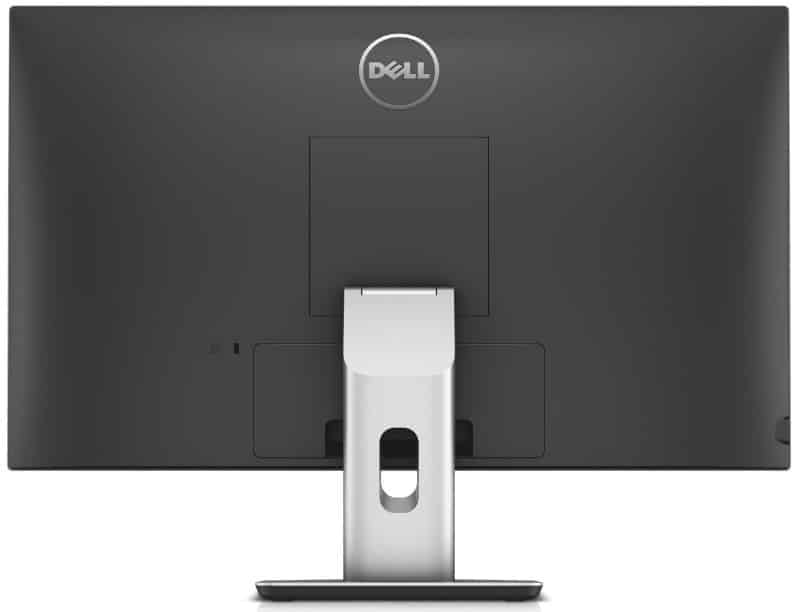 The back, which you probably won’t be seeing all that much, is a curved matte black with the Dell logo imprinted on the top. The monitor itself is not all that thin, but the curve makes it look nice. Below the stand connection is a spot for ports which comes with a cover to keep things as clean as possible and from there using a set of cords through the stand hole if you want. Back to the front, the bottom bezel is solidly built plastic with the Dell logo in the middle and slightly protrudes from the surface. On the right side of it are four gray dots and a power icon which function as to pass the menu buttons. Beneath the power icon is a bright LED band that poses when sleeping and stay stable when on and is not too bright or too dim as to disturb you.
The seamless minimalist buttons and LED along with thin bezels make everything just really pleasing to the eye. So pressing on any four of the dots brings up a menu showing what each dot does and from there you can choose where to go. The far left option brings up the many presets that come built-in. The two I used the most are multimedia which is the most accurate setting out of the box and paper which dims the display and makes it a bit warmer for less strain on your eyes at night. There is also a custom option so you can tweak the colors to your liking.
The other options are somewhat strange. Standard is slightly green, the movie is extremely cold, the game is ok, and not sure what it does exactly, and warm and cool do what they say. Movie and game enable something called dynamic contrast which reads what is on the display. If it is a dark scene, it will dim the backlight to make blacks deeper and brighten the backlight when a light scene is portrayed. That can look awkward when it switches but some more like it to increase the contrast ratio.

To get the most color accuracy out of the monitor I recommend using the multimedia preset. You can also do some color calibration to get a near perfect color and gamma calibration, the color accuracy being one of the best things about this monitor. My one complaint, was just probably because I am spoiled by an LED, is the slight backlight bleed, visible in the corners when in full black. Also, the black is an incredibly deep especially on brightnesses above the lowest, but that is to be expected on an LCD especially in this price range.
The next stopover brings up a volume control for the speaker and headphone jack output. The third from the left brings up the full menu which has a lot of things that I won’t all go over. One I want to mention is the ability to change response time took fast which increases response time but add some inverse ghosting. I keep it on normal which is fine for my use. There are the options to turn off the LED if it bothers you. And the top right shows the Energy Use switch can be somewhat useful. A nice inclusion on this monitor are the Dual Downfiring 3-watt speakers. They are nothing amazing and do not get all that loud but for the price and the fact that they are there if you need them is nice. They are not pourable and will get the job done from basic stuff you need to listen to on the computer assuming you are in the audio file.
Possibly one of the most convenient things about this monitor is the headphone jack that hides on the side. In fact, for awhile I did not even realize it was there. It takes either the audio input coming from the HDMI or the audio-in. Just like the speakers the volume of the headphones become controllable by the monitor’s UI.

And now for a few quick tests, starting off with the brightness, 0% is plenty small for easy on the eyes viewing in a dark room. Going up to 25%, you get a pretty good brightness for low light indoors. 50% will probably be good if you have some brighter lights. From there off it gets pretty bright although it increases less from 75% to 100%. Typing on a solid white document at 100% might burn your eyes out but it seems just fine for videos in standard lighting. Viewing angles are fairly good. Graying out a bit as you go closer to the side but not so much as that you can’t read the screen. The only time they are bit finicky is at high brightnesses on black where your angle can change the amount of uneven backlighting you see.

A bit more information on this IPS Monitor

For ghosting, just dragging a window around there is noticeable ghosting but to my eyes not that bad. And last a few basic color tests. Overall the colors are vibrant and contrast is high comparing it to something like my MacBook Air’s display. It looks many times better.
So why did I choose this monitor over all the other ones that were available. Well, funny story, I was actually set on one screen, but the one that was on quote “sale” at BestBuy had no HDMI and I needed HDMI. So I knew I would like this one but I said they are debating because I knew I would encounter a lot of issues with the glossy display while filming videos, and it was more expensive at $180. Anyways after a bit more research, in store I decided to go with this one not only because the size was good, not too big that the pixels were evident but not too small. Also, I love the design and could tell the colors were pretty spot-on.
So I bought it thinking I might return it after the review was done, but after using it more and more I came to love it. It looks great in every way and that is what the monitor is suppose to do, right?
Anyways, I have tons of areas to do work and a lot of screen real estate to enjoy my media. It meets my needs and I would definitely recommend it to anyone looking to buy relatively inexpensive monitor whether that be for casual gaming or just working.