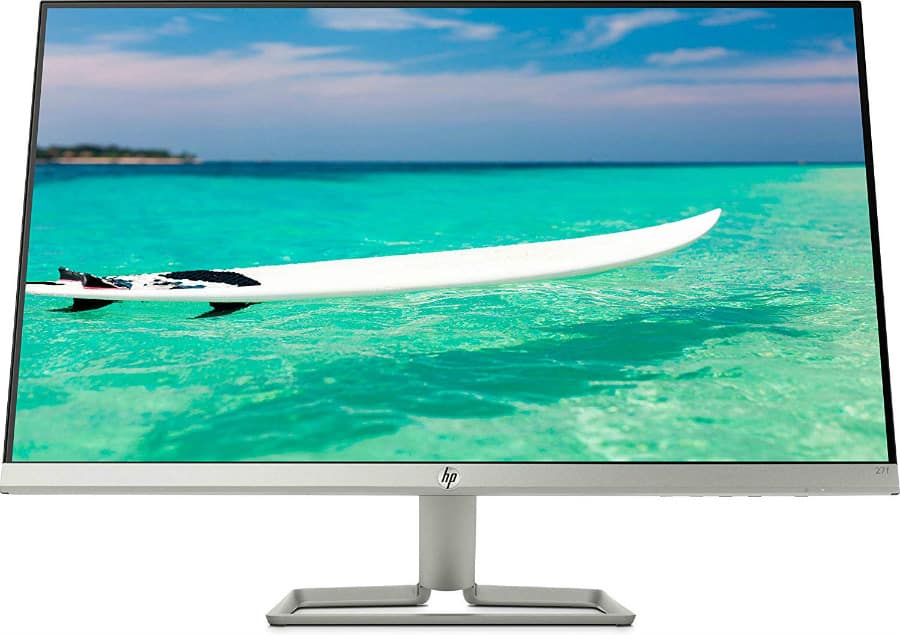 The HP 27F offers basic or entry-level specs in a sleek, minimalist package that delivers decent overall performance for a range of users. The monitor uses a good quality IPS panel for excellent color and viewing angles, but the 1080p resolution could be a deal breaker for some. The HP 27F is a budget-oriented variant which means it has a few cut corners but does its performance for every use expand its true value? 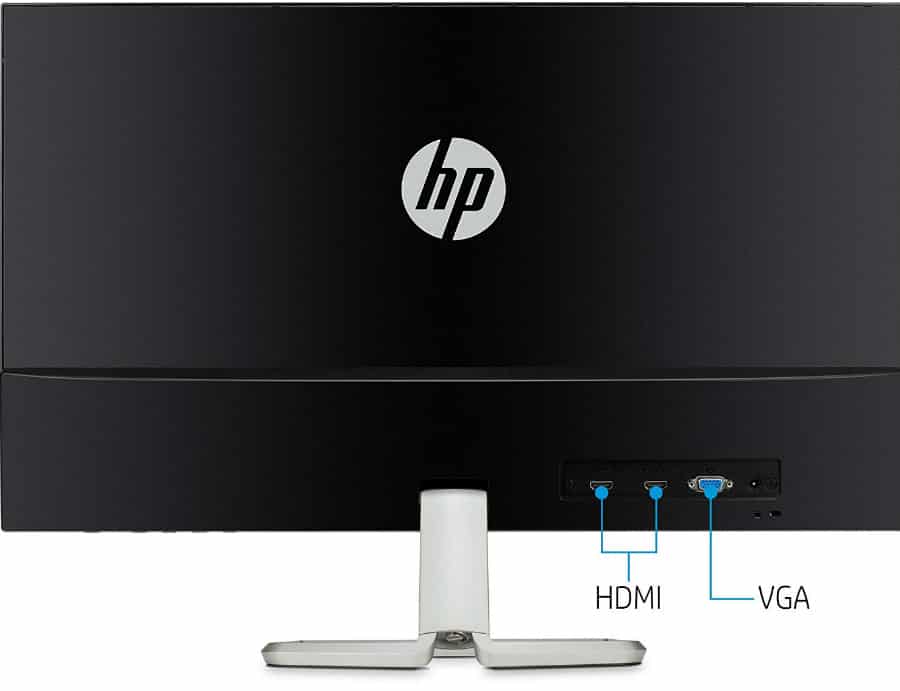 The HP 27F emphasize on sleekness all over its package to create an attractive option for a wider audience. The monitor comes in a matte black and silver combination which strikingly matches with some high-end laptops such as XPS 13s or Surface Pros. The display is bezel-free on three sides save for slim inner borders and a millimeter-thick hard outer border.

The monitor is slimmer than most monitors which are already considered slim, but there are a few restrictions. For one, the HP 27F doesn’t include VESA mounting option since the chassis is too thin. For some, the OLED TV-like appearance could outweigh the limitations if they are less of a concern during setup.

The design of the HP 27F is straightforward due to its budget-oriented nature, which in turn, also cuts off a few extra features. The included stand for the device is very attractive, but it can only offer tilt. And since the product will not accept aftermarket mounting, you are going to have to live with that.

The HP 27F’s build quality is within reasonable limits of a budget monitor since there is little to no flexing or uneven seams on the product. However we’ve noticed that the device slightly wobbles even with the slightest impact, indicating a level of fragility from the stand’s connection to the chassis. The display stands level and steady if untouched, but the slightest press of an OSD button reveals the issue.

Overall, the quality of HP 27F is comparable to its QHD counterpart, the HP 27Q. However, the latter holds its ground better thanks to its solid base and the upright’s design which adds two supporting stems.

All of the HP 27F’s connectors aren’t hidden and are readily accessible on the lower corner of the rear panel. You get HDMI 1.4 and HDMI 2.0 for primary display inputs, along with a VGA slot for legacy devices. There are no USB slots on the horizontal-firing layout, plus there is no room for built-in speakers in the ultra-thin chassis.

The HP 27F features a 27-inch IPS panel with a 1920 x 1080 resolution, 60Hz refresh rate, and a 5ms minimum response time. A decently bright 300cd/m2 backlight powers the screen which is specified with a typical 1000:1 contrast ratio like most IPS-based displays. This combination of specifications is common, but there are some models which are capable of outputs that can surpass even some high-end offerings.

The immediate complaint most would say about the HP 27F is its low pixel density due to the loose pitch of 1920 x 1080 in a 27-inch size. Some of the pixels could be visible if you look close enough, or some images may look less detailed due to jagged edges. But popular feedback from our readers suggests that this kind of display is preferred for fast-paced games due to the enlargement of small objects such as heads or limbs in CSGO.

A colorimeter reveals satisfying results for the HP 27F, despite a few setbacks. The IPS panel is only capable of 93% sRGB coverage, but accuracy is decent for everyday use with a DeltaE of 2.8. Gamma sits close to the ideal level at 2.15, while contrast is quite high at an average of 1140:1.

You can push this monitor further to restrict the color errors to a DeltaE of 1.0 and a slightly higher gamma level of 2.19. This result will correct the color temperature to reflect closer to the ideal 6500K level. However, users need to purchase a colorimeter which is almost at the same price as the monitor and impractical to get these scores.

Contrast and color are almost at an excellent level, but we noticed a slight flaw from the HP 27F when used in a bright room. The screen’s blacks appear slightly grayish when lights are on, giving off the impression of low contrast levels. The backlight is also bright enough at a maximum of 308cd/m2, but it isn’t enough to reduce the issue.

On the other hand, panel uniformity for the HP 27F is excellent due to deviances staying within 5% for the backlight with very minimal bleeding on the edges. The clouding is only noticeable when viewing the screen with a pure black image, so it shouldn’t bother users who are browsing or gaming. Take note that this may vary from unit to unit since no two IPS panels are made equal.

The HP 27F does well in gaming applications due to a few of its capabilities. The 75Hz refresh rate provides a bit of headroom, but it isn’t comparable to a 144Hz display when it comes to smoothness or blur reduction. But what’s great about this display is you can use it at 75Hz without any trickery, unlike some models which require FreeSync to be active first.

The HP 27F is still susceptible to blurring, especially in fast-paced games with colorful rendering such as Overwatch or Fortnite. The panel isn’t fast enough to deal with this flaw, but it’s a 75Hz budget monitor so it’s understandable. At least, HP was kind enough to include an Overdrive setting to help the monitor cope in these instances.

We only recommend using the 2nd level of Overdrive out of the five since going higher induces overshoot. A 144Hz monitor or even a 240Hz will be immensely better in this regard, but its hard to argue with the budget pricing.

Finally, the HP 27F is compatible with FreeSync over HDMI, allowing AMD-based budget rigs and Xbox users to enjoy buttery smooth frames. Input lag is also limited to 9ms, cementing the product’s suitability as an easy to own display for low-spec gaming. If it weren’t for the 75Hz refresh rate, this monitor could be a great competitor against the Acer KG271 which has a slight disadvantage due to its panel type.

Thoughts on the HP 27F

The HP 27F is a surprisingly well-rounded product despite its many limitations. The display is readily capable of reasonable image quality which can be pushed further, while gaming performance is fantastic. The readily accessible 75Hz mode is great for adding a bit of headroom, but the boost isn’t miraculous at this point.

We’re unsure if we can recommend the HP 27F as a must buy for budget gamers due to its design which trades durability and reliability for aesthetics. The monitor looks unique and attractive, but its wobbly stand and exclusion of VESA mounting are considered deal breakers by many. The product should make your shopping list if you want a reasonably-priced contemporary monitor that looks and performs beyond its price group.