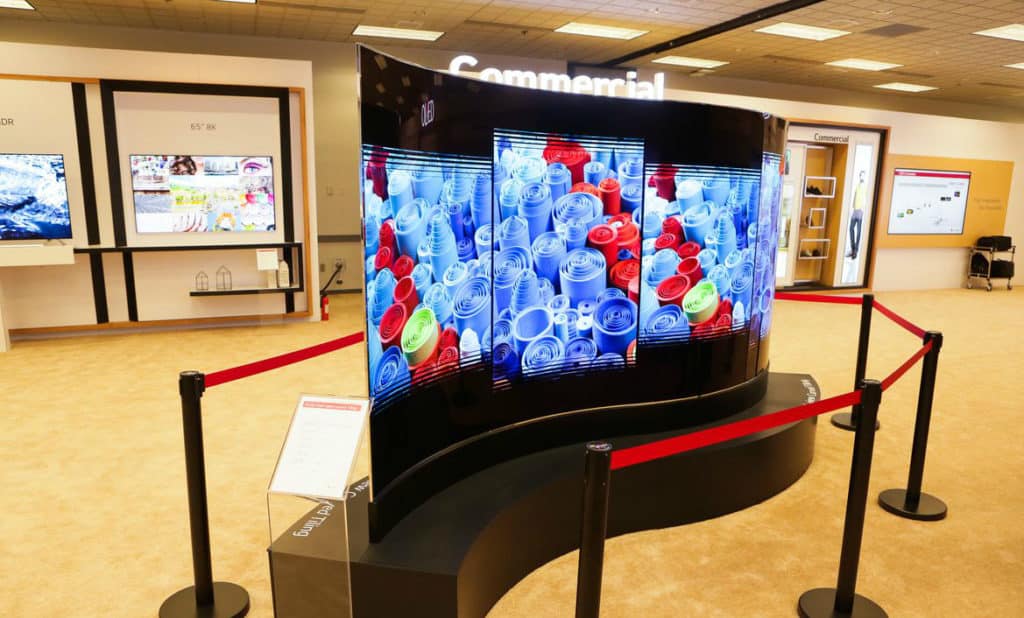 As Thin As Your Credit Card

In May of 2015, LG Display which is a subsidiary of LG Electronics which is responsible for producing their panels unveiled a new OLED type TV which gently bends since its only 1mm thick and 1.9kg. We’ve already seen some of their curved TVs which paved the way for curved monitors, but this particular product does not fit in a plastic cabinet with a stand, but rather, it sticks on magnetically to a mat mounted on your wall. You can peel the screen off as if it was a piece of cardboard, and just put it back on the magnetic mounting. These characteristics allow for some possible configurations, but up to what extent of usages do these forms apply? How will the unit receive power and signal input since the apparatus does not look like it carries I/O ports on its sleek style? (We are guessing it will make use of USB Type-C and Thunderbolt Tech) And more importantly, how much will they be and when will these types of products arrive on retailer shelves? These are big questions left unanswered by the company, except for a probable expensive price since OLED manufacturing processes yields are low and materials are expensive.

What is OLED and What Makes it Important to This Concept?

OLED has been around for some time; this tech is a vastly improved backlighting type when compared to conventional WLEDs and RGB LEDs. Instead of conventional diodes, this type uses an electroluminescent organic compound layer that responds to controlled electric currents. Each particle is small enough, around the size of 50 atoms, but fully capable of providing illumination to screens. Their small nature allows manufacturers to make screens thinner and lighter, making the Wallpaper TV and the current curved displays we now have a possibility. Despite their advantages which also include lower power consumption, OLEDs are significantly challenging and expensive to make since the yields of their processing only amount to more or less 60%. A currently available LG 65″ TV costs around $9000 and Dell’s upcoming Dell UP3017Q will ask for $4000 once it becomes available. However, the Korean company is now stating that their factories and labs are capable of an 80% yield in production, but that is still too low when comparing to LCD results.

This is Old News, So What’s the Latest?

More than a year after LG’s press release in Korea, there still are no actual release dates, pricing, and specification lists from the company. Although all of these appliance makers update their products annually, we still have yet to see what they are offering to the consumers for 2017. But last month, a leaked document surfaced on the web containing new models for each of the available LG OLED TVs from the B series to the G series, but at the bottom of the list, a new entry with the letter W as a designation was added. Speculations between tech gurus and communities agree that this new model is the Wallpaper TV we are talking about above. If indeed true, this new development is very exciting for consumers and the whole display industry in general. This new product introduces a new step in progress, one which lies beyond the advent of OLED TVs. But the biggest question always remains in the pricing. The top of the line TV costs $9000 as previously mentioned, and this new W series of products might come out at ten grand or more. At this point, speculations are meaningless until LG gives exact answers, but 2017 is just around the corner so we might see these products on Amazon, albeit with eye-popping prices.

The real benefits of this product are vague at this point, but on an Architectural or designer standpoint, the ability to flex and the lightweight nature allows for more mounting options at home or in commercial places. We may end up seeing these products sticking to your ceiling above the bed, without destroying fragile ceiling boards. We could also see these on art spaces with irregular shaped rooms, or on circular columns commonly found in malls as advertisement platforms. The unanswered facets and high pricing may be a huge prohibitive factor for the success of these types of products, but as most tech trends go, these will all arrive at acceptable levels. At this point, the LG Wallpaper TV is a fantastic luxury product that not only represents the next steps the display industry will take, but it is also a small piece of the bright future we are about to witness.