Nixeus monitors and gaming peripherals were rarely heard among enthusiasts who often focused on bigger brands for their builds and purchases. Their recent releases such as the Nixeus Vue gaming monitors put them on the map, and since then these products have been considered by reviewers and gamers as excellent value products which offer superb performance at lower prices.

Nixeus is an American company based and established in Los Angeles, California in 2009. The brand aimed to specialize in computer monitors, consumer electronics, and peripherals. The foundation of the company was started by executives who were enthusiasts themselves; meaning they had in-depth knowledge and experience in the PC gaming and consumer electronics industries.

Nixeus’ commitment to producing high-quality products for immersive entertainment, business, and productive endeavors helped some of their goods in gaining recognition. Not only do gamers trust their offerings, but some bigwig organizations which include Fortune 500 companies, both financial and educational institutions. Even NASA uses Nixeus products in some of their facilities, amongst other US government agencies.

All of these successes started in 2009 when the company offered the Nixeus Fusion Network Media Player. This product was the pioneering network media player to offer Dolby TrueHD and DTS-Master Audio. In 2011, they released the Nixeus Fusion XS, the world’s first Marvell Android Network Media Player with 10-bit playback support. These products caught the interest of audio/video enthusiasts, launching the company into their first successes.  Nixeus does not sell directly, but through third parties.

The year 2012 was marked as the year when Nixeus entered the unstoppable growing monitor industry with the Nixeus NX-VUE27. This display was equipped with an IPS panel with a 2560 x 1440 resolution, and it sold for only $500. Similar spec models at the time cost almost twice, and this aspect helped the launch of sales of this premium WQHD monitor for the masses.

Eventually, in February of 2014, the company partnered with AMD for “Project FreeSync” which gave birth to the new and improved Nixeus NX-VUE27D. This product was the world’s first monitor demoed with AMD FreeSync technology during Computex 2014. The Nixeus NX-VUE27D started shipping after a few months in July of the same year, cementing the company’s name as a gaming monitor manufacturer.

Of course, advancements had to made to keep up with the world’s evolving tech. The partnership with AMD spawned another successful gaming monitor in the Nixeus Vue 24, which was the first to offer a FreeSync functional range of 30Hz to 144Hz, a capability which even the biggest manufacturers couldn’t easily match. This model was announced in June of 2015, and released in August, boosting the sales of the company by a huge margin.

The Best Nixeus Monitors and Peripherals 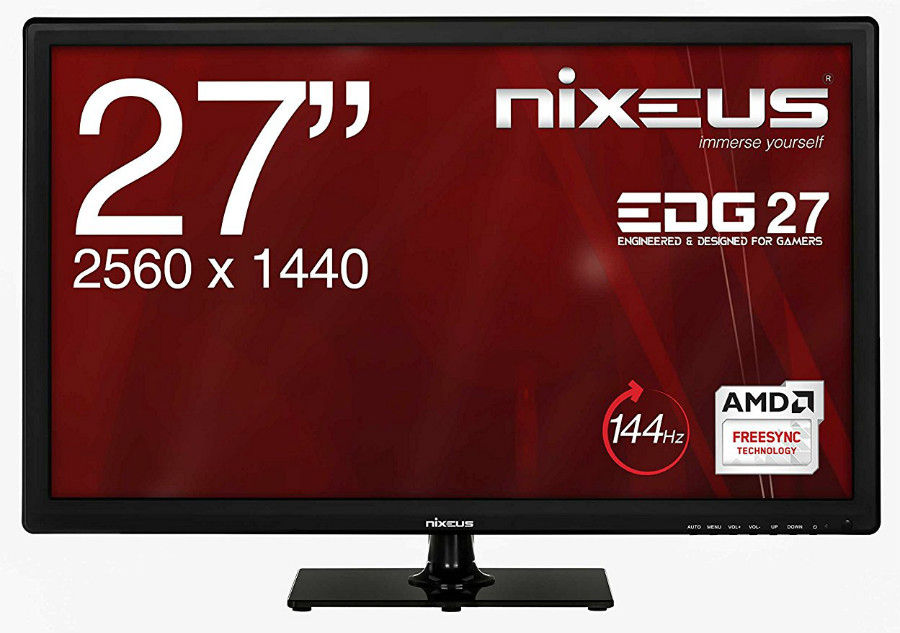 The Nixeus EDG 27 comes in two flavors; one with a tilt only stand and the other equipped with an ergonomic mechanism. Both products share the same industrial, simplistic look, but both are provided with decent performance and FreeSync to help provide gamers with buttery-smooth graphics.

This gaming monitor is equipped with an IPS panel which for the price is amazing because competitors with similar specs cost at least a hundred bucks more. Users get to enjoy low input lag while their selected titles can benefit from FreeSync with a functional range of 30Hz to 144Hz plus LFC, which protects the integrity of the screen output even if the frames suddenly dive. 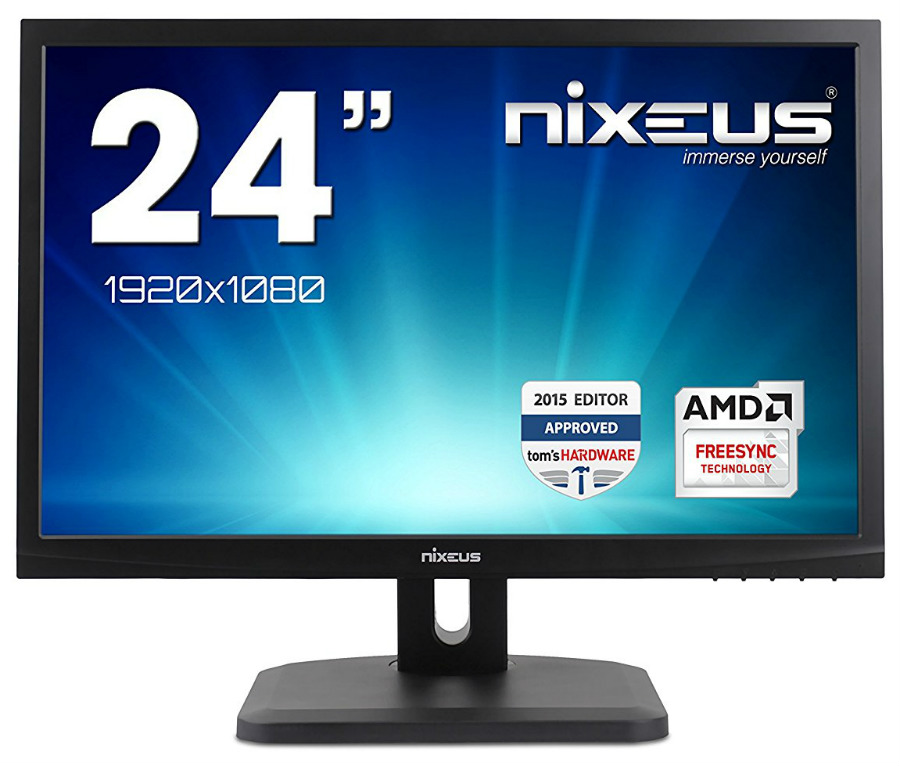 The Nixeus NX-VUE24 is the world’s first 24-inch 1080p TN gaming monitor to offer FreeSync with a range of 30Hz to 144Hz. Since its release, it has been widely preferred by gamers who are looking for the best value and performance without the extras in design and unnecessary features.

The specs also dictate that this model is a great option for E-Sports gaming, where 1080p paired with responsiveness and high refresh rates are ideal. For its price, the Nixeus NX-VUE24 is well-equipped with every connectivity option you will need, plus a robust, and industrial design with decent ergonomics that should last quite a while. 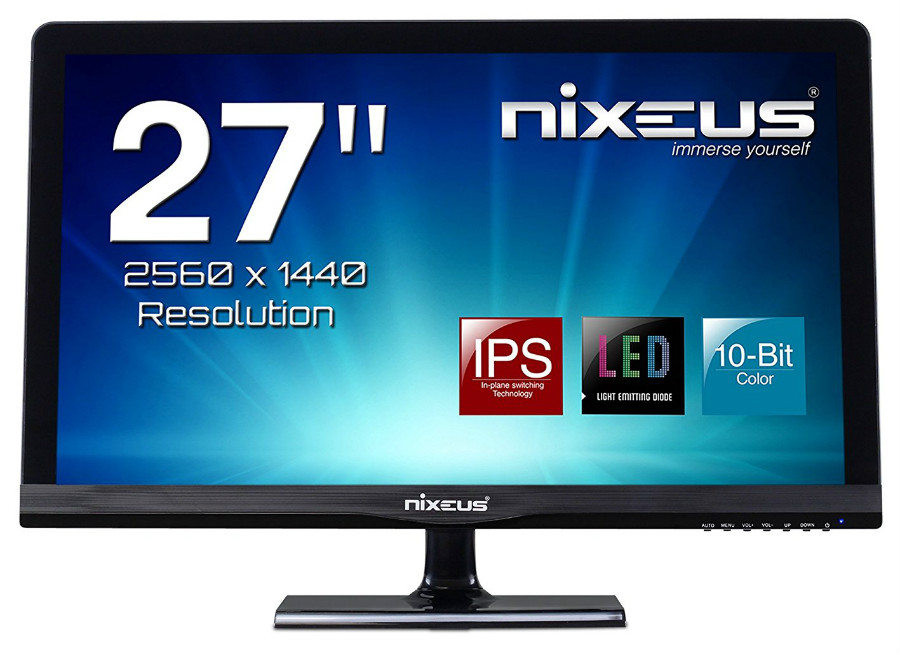 Productivity and media viewing is always better on higher resolutions, an aspect of displays where the Nixeus Pro Vue 27p excels at. This budget model offers a reasonably good IPS panel capable of 10-bit color output, meaning your media will always pop out of the screen thanks to vibrant colors.

Of course, the Nixeus Pro Vue 27p isn’t a professional-grade monitor by any means, but it can enhance your home or office computer experiences for a low price. It’s also decently equipped with everything you need for a smooth operation, so spending more than what these value products ask isn’t necessary for basic needs.

Mechanical keyboards tend to cost over a hundred dollars, but the Nixeus Moda Pro is an affordable option if you want the crisp and clicky sounds this type of device can offer. This product comes in blue, brown, and red switches, making it able to cater to gamers and worker’s different tastes and needs.

But our absolute favorite feature for the Nixeus Moda Pro is its solid steel plate-reinforced aluminum chassis, which gives it a premium feel and uncompromised durability. There is also an option for MAC keycaps so you can use this as a cheap alternative to Apple’s magic keyboards which often cost twice as much.

We think of Nixeus as a valuable company that offers decent alternatives which aim not to defeat its high-end counterparts in ratings and sales, but to offer customers a better bang for their bucks. Most of their products only provide the essentials such as performance and capabilities, which from a thrifty standpoint, is all that matters.