The VicTsing gaming keyboard emphasizes on a durable and feature-rich design for a very easy to own price you won’t see on big-name alternatives. Membrane keyboards are out of fashion nowadays, but they still have value for users who want either a budget option or would rather avoid the quirks of choosing a switch type for mechanical variants. Let’s find out if the VicTsing Gaming Keyboard’s value per dollar is worthy of consideration. 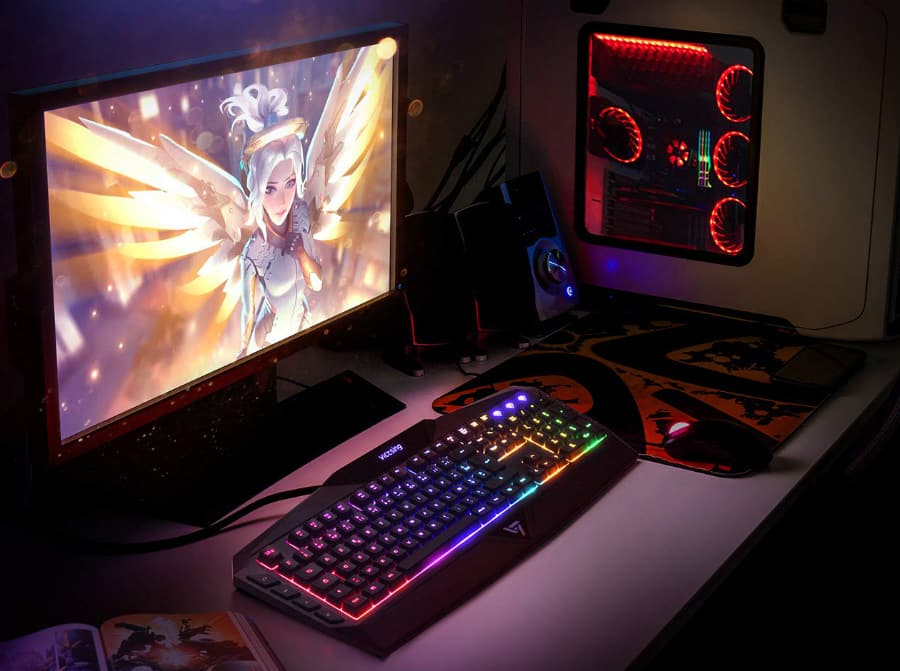 The VicTsing Gaming Keyboard has a unique, semi-octagonal shape which gives it an edgier look than most variants in the market. The chassis has a matte black finish with glossy details on the brand name and logo at the top and bottom. The lower area of the frame slightly extends at an angle to provide a wrist rest, but the depth isn’t sufficient, and the hard surface isn’t ideal. 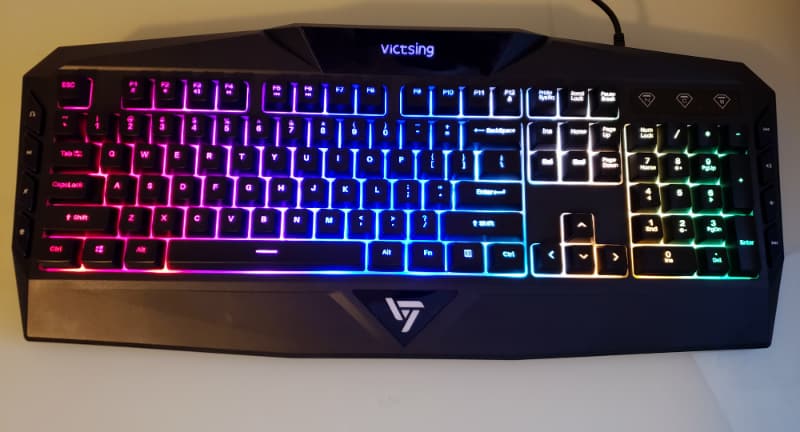 The VicTsing Gaming Keyboard uses membrane type keys which are dead silent compared to linear mechanical keys which are labeled as extra quiet. They are soft to the touch, but if you are used to mechanical keyboards, they feel somehow squishy or spongey. It’s also worth noting that typing on with speed creates a clacking sound which some will like, but many will find to be annoying on a membrane variant.

The VicTsing Gaming Keyboard is equipped with RGB lighting despite its low price, but you have to live with four modes which are too limited for today’s market. You can pick between light off, medium or high brightness, and breathing mode, all of which, are in rainbow color. It’s very limited, but the good news is that the LED lights are evenly lit and bright enough to fight through your room’s ambient lighting.

VicTsing also added anti-ghosting to nineteen keys including the most pressed WASD, CTRL, and Space buttons to avoid conflicts in inputs. We also love that the board has dedicated multimedia keys which even some big name brands leave out of their flagship models. It’s also worth noting that the easily removable keycaps are laser-etched to avoid fading and distortion of the letters even with heavy use.

The VicTsing Gaming Keyboard has an excellent overall design if you consider its price. The chassis has drain holes at the bottom so spills can seep out before they damage the electronics. The brand also considered ergonomics wisely, adding flip-out stands which we preferred due to the keypad’s concave shape.

The VicTsing Gaming Keyboard is responsive enough for casual gaming, but you might want something better when it comes to competitive titles. All of the keys are responsive and the nineteen which are ghosting free do not conflict with each other, but our tester felt that there is a slight lag compared to high-end keys. Typing, on the other hand, isn’t an issue, unless you are one of those gifted with a very high WPM.

Our favorite aspect of the VicTsing Gaming Keyboard would have to be the multimedia keys which makes it more convenient to adjust the volume or manipulate video playback. Their placement on the sides of the board is convenient and great if you consume a lot of media or like to watch videos. 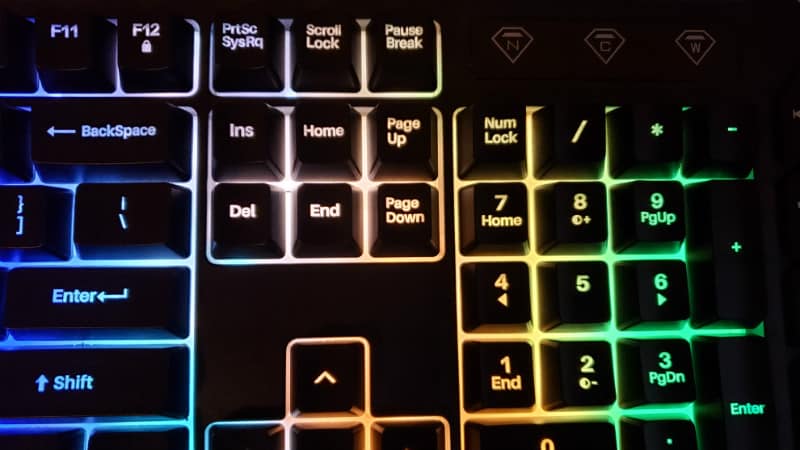 It’s also fantastic that the VicTsing Gaming Keyboard’s RGB lighting is bright enough, but not to the point of blinding users during night time use. Each of the keys is evenly lit, so you get a feeling of excellent quality just by looking at the product. What’s bad about it is you can only choose between four modes which are stuck in rainbow colors only.

Thoughts on the VicTsing Gaming Keyboard

The VicTsing Gaming Keyboard is very limited when it comes to features for today’s market, but it locks down a few essentials which we’d love to have on every variant on there. The ergonomic design of the board is essential for extended use, plus the multimedia keys are a godsend. It’s also rare to find keys with anti-fading properties at this price range, so that is a huge plus for a budget option.

However, the affordability of the VicTsing Gaming Keyboard comes with a few penalties which we know many gamers will dislike such as the lack of RGB flexibility. The keyboard has anti-ghosting which is great, but it has a slight delay compared to other membrane types we’ve tested. It’s a great keyboard with great add-ons for the price, but it isn’t top-notched in today’s gaming standards.