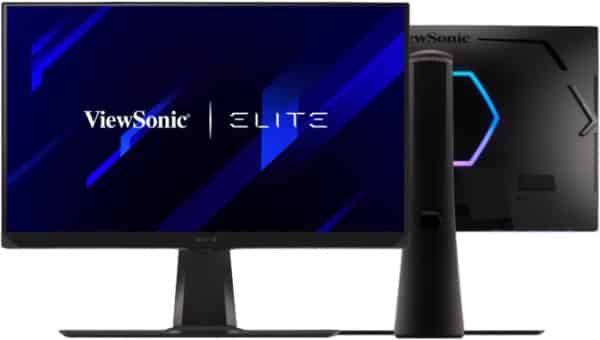 The ViewSonic Elite XG321UG is a new flagship designed to impress enthusiasts with its Mini LED backlight and the resulting HDR performance. It’s a 4K 144Hz gaming monitor with Nvidia’s G-Sync Ultimate, along with HDR 1400 certification like the Asus PG32UQX. The monitor was first announced at CES in January, but it looks like it’s finally arriving soon.

The ViewSonic Elite XG321UG uses a 4K 144Hz IPS panel with Quantum Dot technology for rich color coverage and contrast. The backlight has a 400 cd/m2 SDR brightness, but its peak reaches up to 1400 cd/m2 when HDR is active. This is achieved with the help of the 1152-zone Mini LED backlight which gives amazing control over its contrast and transitions.

It covers up to 98% DCI-P3 coverage just like the Asus PG32UQX, so only a few monitors can compare when it comes to imaging performance. The monitor’s G-Sync Ultimate feature adds the fabled FPGA controller which gives the GPU granular control over the refresh rate. It is also worth noting that this model can be overclocked to 150Hz thanks to this amazing feature.

It’s a flagship monitor, so it should do quite well in professional and productivity applications as well. The Asus PG32UQX showed excellent performance in imaging, allowing users who can calibrate it to use the product for color-critical work. Of course, you also get the 32-inch 4K screen and the space it provides, giving users more room to maneuver.

What we like about the ViewSonic Elite XG321UG is its simpler design which will be easier to digest for the majority. It still has the RGB ring at its back, so aesthetic builders can still match it to their setups. The monitor features HDMI 1.4 with DSC and three HDMI ports, but all of them are limited to version 2.0 so they are limited to 60Hz.

It also includes a fully adjustable stand and a pair of 5-watt speakers which should sound better than your regular built-ins. Other specifications are still forthcoming and we will share them via updates when they become available.

The ViewSonic Elite XG321UG is scheduled to arrive by the end of this year, but pricing still isn’t listed at this time. ViewSonic has always been more practically priced compared to other brands, but we’re sure that the Mini LED tech in this model will expand its price exponentially.