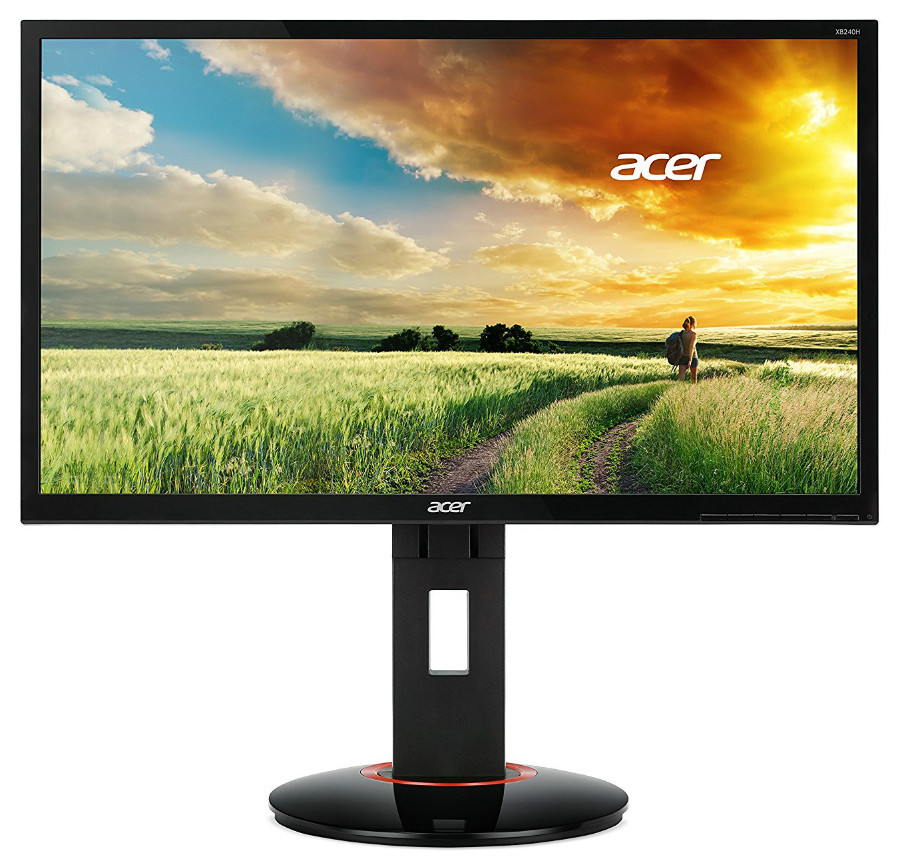 The Acer XB240H is a 144Hz gaming monitor with G-Sync which released back in 2014 but still finds significance in a market where G-Sync monitors cost above $500. This venerable model comes with all essential features, although consumers might easily overlook it due to its aging design and existence. With that in mind, the Acer XB240H provides excellent value if you consider its features, but you might have to overlook a few imperfections which were already corrected by newer iterations. 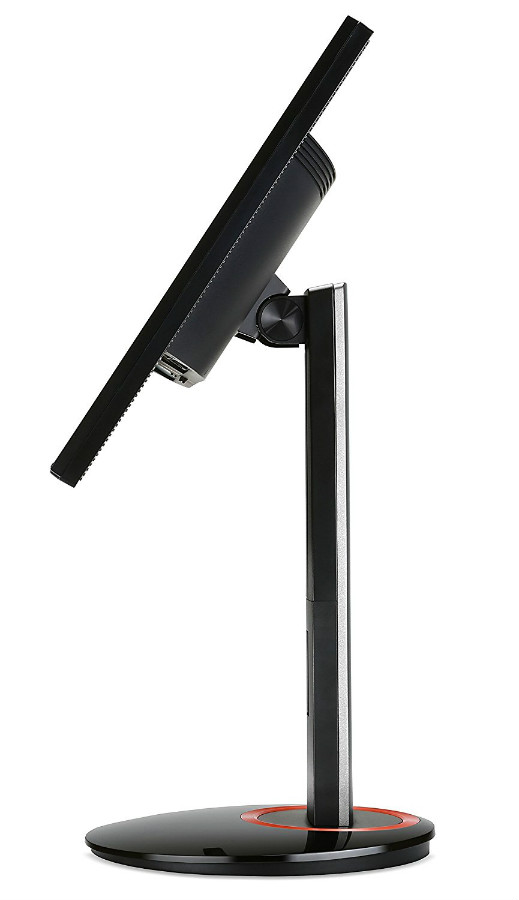 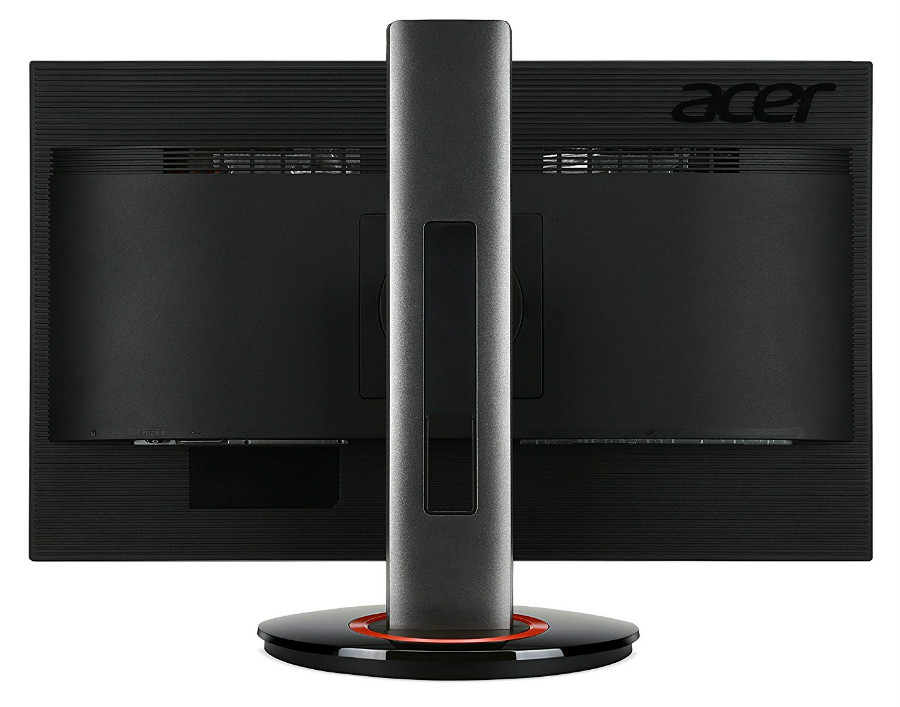 The Acer XB240H is wrapped in the brand’s first generation of gaming monitor design which includes an all matte black exterior with a red ring on the base. This appearance is far from what the current predator designs have become, and opinions about their attractiveness are mixed. In our view, this first look will suit more tastes since it isn’t as gaudy or aggressive.

The biggest advantage of the newer models in aesthetics is their bezel-free faces, whereas the Acer XB240H has plastic strips on all sides. Their thickness is still within reasonable limits since every side is more or less only half an inch wide. From the side, the cabinet is slim except for a slightly protruding bulge which holds all of the display’s innards.

If you do go for the Acer XB240H, one of the drawbacks you have to live with is the limited video input options. You only get a single DisplayPort 1.2 in the I/O layout, plus you cant expect to see USB 3.0 or even 3.5mm jacks. This limitation is enforced by Nvidia’s first wave of G-Sync modules which did not allow any other connections.

At least, the stand for the Acer XB240H is as functional and feels more stable than what the newer version has. You get height, tilt, swivel, and pivot adjustments, plus the mechanism is removal. You can then use VESA mounting options which is ideal even for this older model since it is slim enough for flush mounting.

The Acer XB240H features a 24-inch TN panel with a 1920 x 1080 resolution, 144Hz refresh rate, and 1ms response time. Specs are typical to other TN-equipped models, so we cannot expect vibrancy and deep contrast levels similar to IPS or VA models. Out of the box, colors are washed, and the screen is too bright for comfortable and enjoyable use.

Adjusting the brightness down to safe levels and setting gamma to 2.2  improves the image’s vibrancy, and lessens the coolness of the colors from the start. The delta E of 4 can enhance to 2.86 which isn’t entirely accurate, but still within acceptable ranges to match the semi-perfect sRGB coverage. Although surprisingly, the Acer XB240H excels in contrast since it posts an average of 950:1 depending on brightness.

These numbers aren’t the best results in the market which has already evolved past the Acer XB240H’s capabilities, but for E-Sports titles, these are sufficient. Not to mention you get to enjoy tear-free gaming with G-Sync, so as long as you have a Nvidia GPU, your eyes are safe from these flaws. The 144Hz refresh rate and fast response time of TN technology work well to curb blurs and interlacing, curing the age-old issue which led to the creation of this type of display product.

The Acer XB240H is perfect for what it is, but its age will show once you test its responsiveness, which is somehow disappointing for a gaming monitor. The latency for this product averages around 20ms, making it nonideal for fast-paced or competitive games. 20ms isn’t a lot in practice, but sensitive gamers or those who have experienced faster options will know the difference.

But for casual enjoyment or immersive gaming, this limitation shouldn’t pose a huge hindrance to your enjoyment. When paired with a GPU powerful enough to steam through modern titles at 1080p, gaming is buttery smooth and visually enjoyable if you understand the limitations we mentioned.

Thoughts on the Acer XB240H

The Acer XF240H is a fantastic monitor during its heyday, being one of the first few G-Sync monitors to revolutionize the market. Its combination of 144Hz refresh rates with an exclusive but flawless VRR tech can still uplift your gaming into buttery smooth goodness. The product’s ergonomic functionality and superb build quality ensure that it will last quite a while on your desktop.

But with its age, the Acer XB240H does include some limitations due to the handicaps presented by the tech available at the time of release. You have to live with a single DisplayPort for the rest of its life, plus its imaging and responsiveness pale in comparison when compared to what the Acer Predator XB241H can do. But if you do find this at a bargain price, the Acer XB240H can be considered as an excellent purchase if you need a stop-gap or replacement monitor in a jiffy.