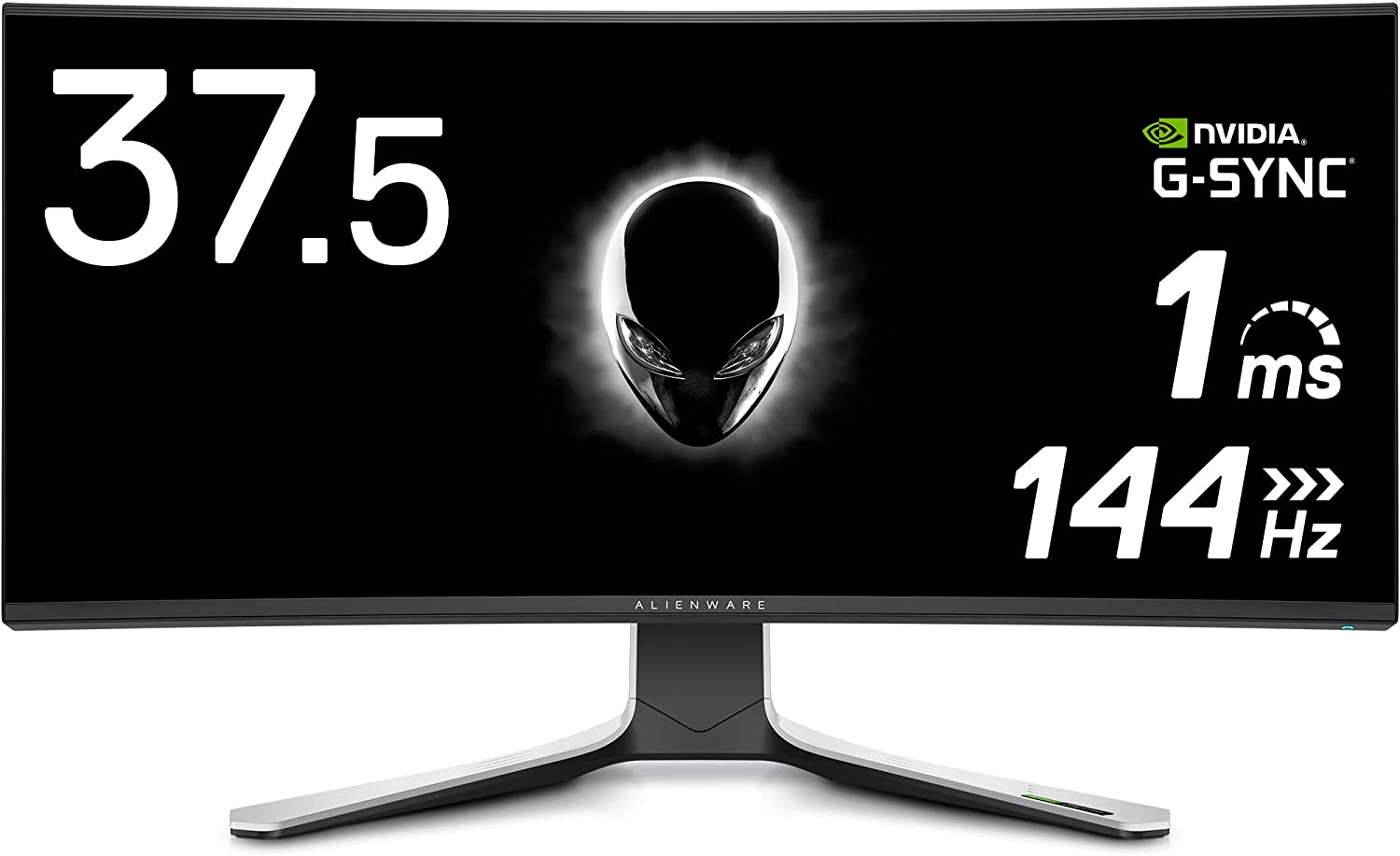 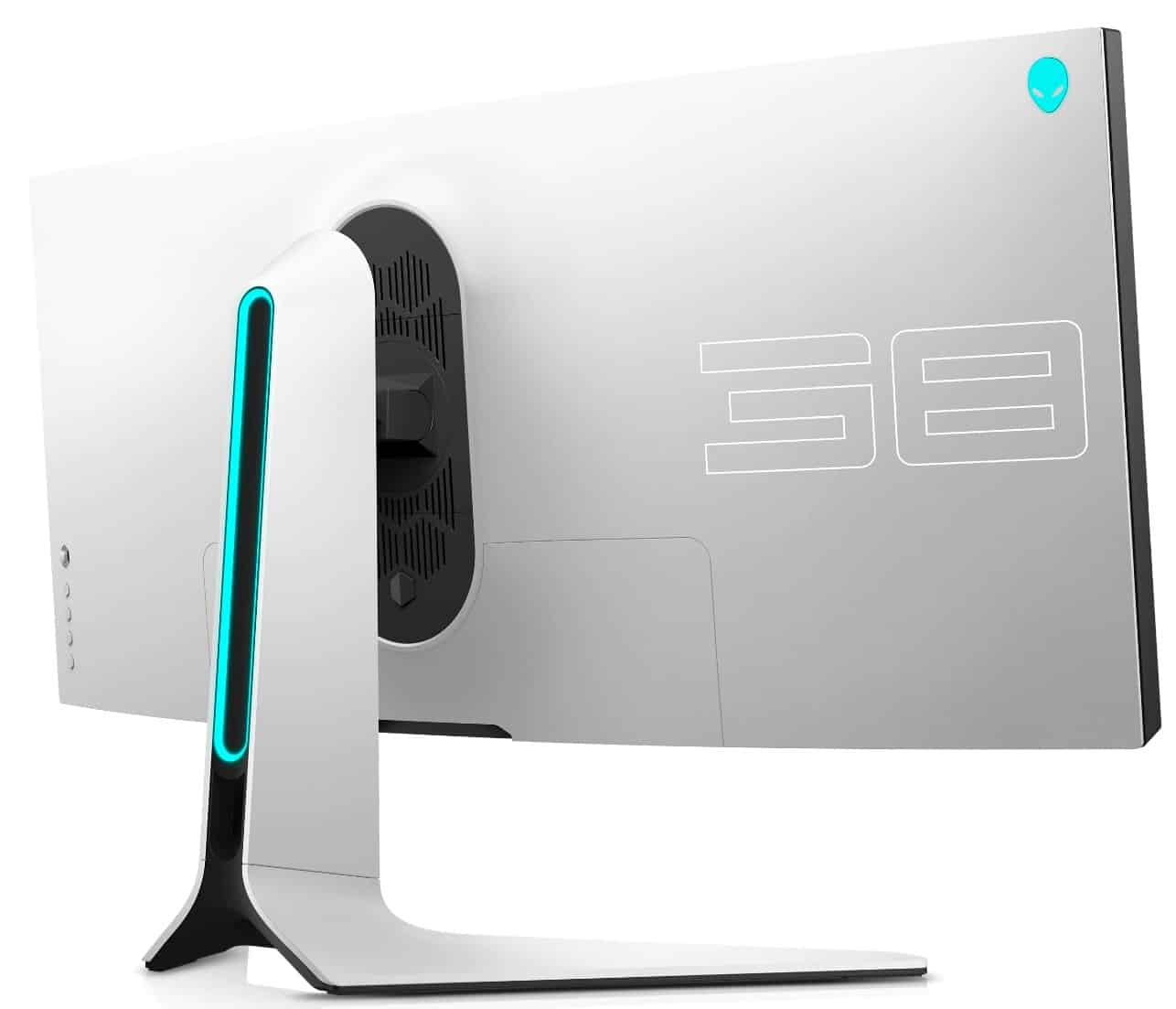 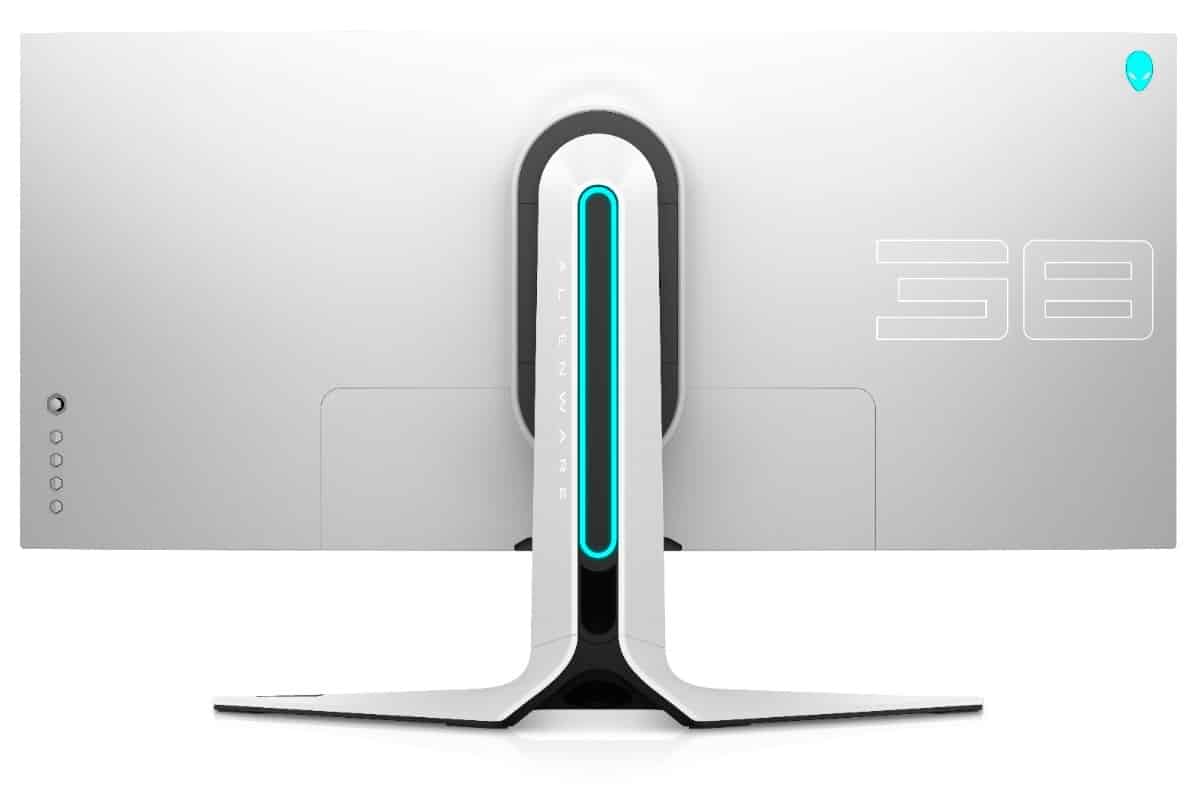 The Alienware AW3821DW follows the same aesthetic as the rest of the 2021 monitors like the aw2721d and the AW2521H. This model comes in a matte white finish called lunar light, but it has some black edges that contrast to the look. The display is bezel-free on three sides, but the minimal borders are already flushed against the screen and almost unnoticeable.

You have to prepare your desk for the Alienware AW3821DW since it is a massive device that can potentially misplace your peripherals. It needs almost a foot of depth and it isn’t lightweight at close to 27 pounds. The culprit here is the monitor’s premium aesthetic, but we’d rather have it since the device looks good at every angle.

Build quality for the Alienware AW3821DW is nothing short of impressive and you can expect from a premium monitor by Dell. There are many plastics used, but they feel thick and well-reinforced to prevent flexing and damage. The monitor is pristine once it’s unboxed, while the included stand doesn’t wobble unwantedly in regular use. 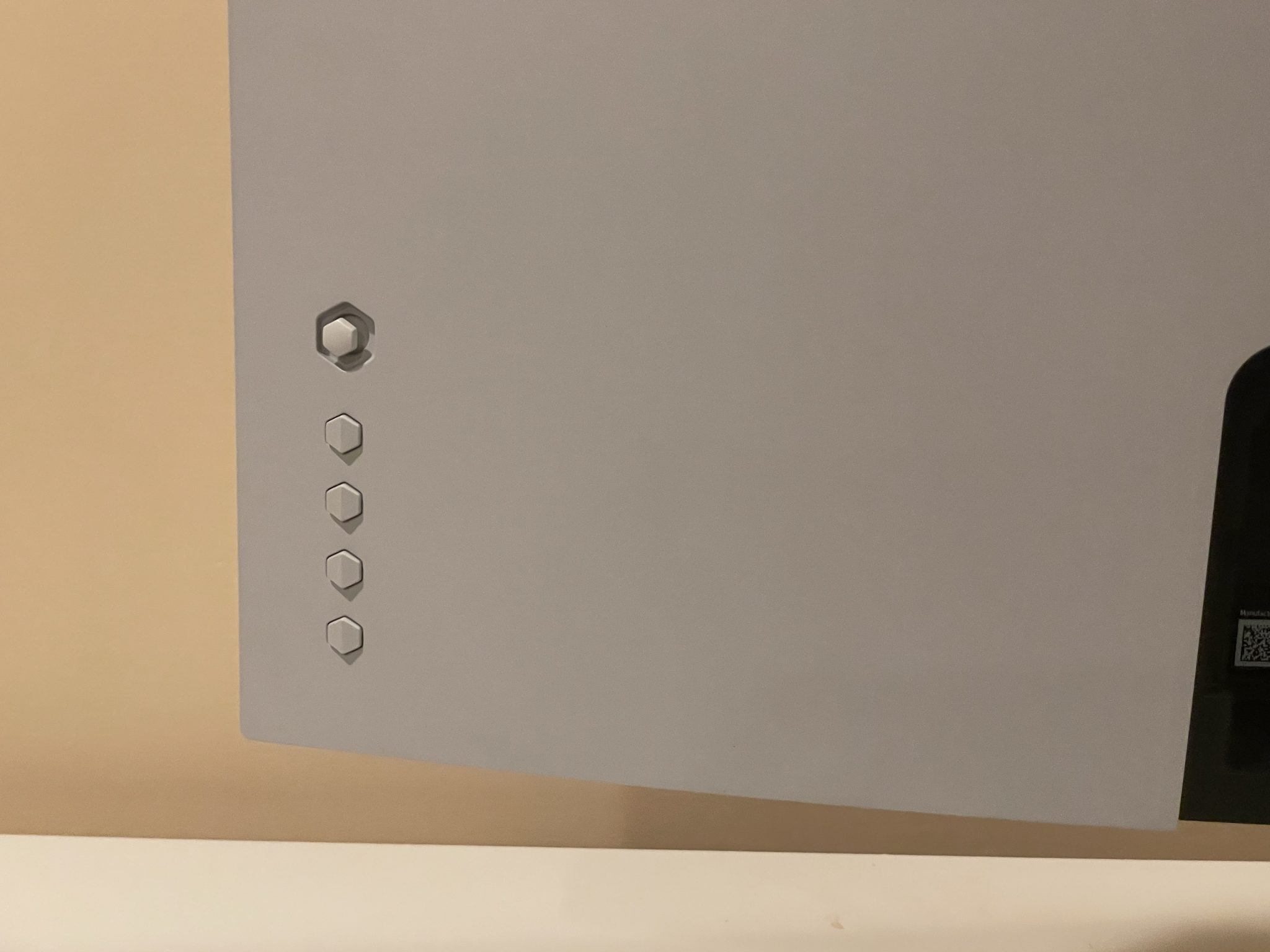 Accessing the Alienware AW3821DW’s OSD is easy since it has a joystick accompanied by remappable shortcut keys. It’s fairly easy to navigate the eight sections of the OSD, so most won’t have trouble trying to tweak something like the brightness on the fly. This monitor works with the AlienFX application, but it’s mostly a command center for the RGB lighting, unlike Dell’s Display Manager app. 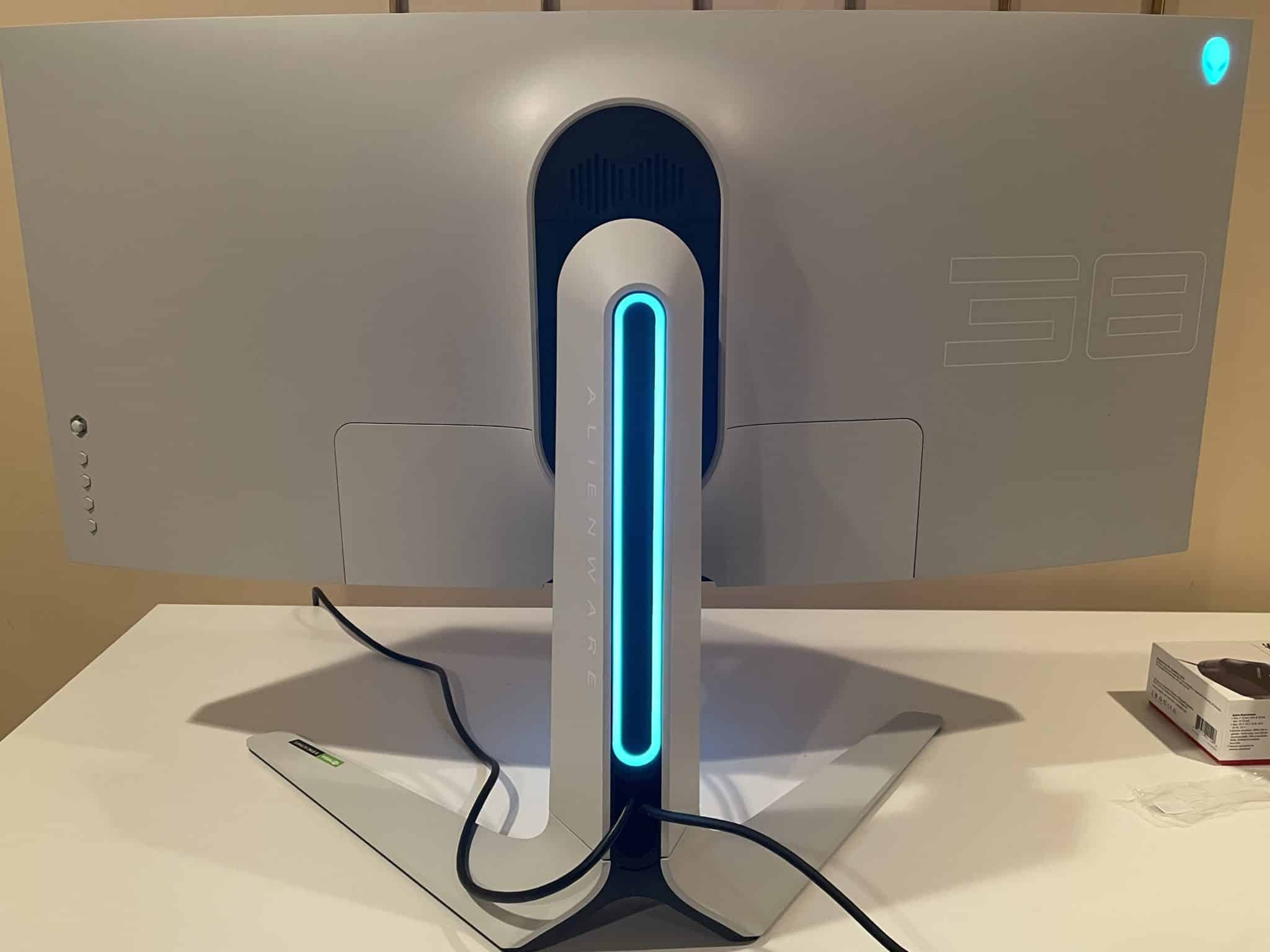 RGB is a key ingredient in the Alienware AW3821DW’s aesthetic value so gamers can easily match their setup’s themes. The stand’s spine has a continuous LED strip, but you also get a glowing alien head logo at the top corner. There is another LED strip at the front that can be controlled using the touch-sensitive bottom bezel as needed.

You will need AlienFX to control the lighting colors and schemes on the Alienware AW3821DW, and that’s both good and bad. The positive side is that you can efficiently control your RGB lighting without any technical difficulties. The downside is that it doesn’t work with existing RGB ecosystems like Asus Aura. It’s annoying that this incompatibility is still common, and we think there should be a consortium that unifies brands since RGB is a big hit in the market.

The stand for the Alienware AW3821DW offers tilt, swivel, and height adjustments which are all you will need for a comfortable view. Our only minor complaint about it is it’s quite large, but it is forgivable since the monitor itself isn’t tiny. You can swap this part out with a VESA mount if you need to save space, but that will add cost and you lose the RGB lighting at the back.

The Alienware AW3821DW has plenty of connectivity features, but it doesn’t have ports that are useful for productivity like USB-C. The back’s concealed layout includes DisplayPort 1.4, two HDMI slots, two 3.5mm analog jacks, and four USB 3.2 ports for your accessories. We feel that Alienware should have added USB-C since it is great for productivity while being a faster alternative to the U3821DW.

You also don’t get speakers with the Alienware AW3821DW which is let down since it’s an expensive monitor. We’d be happy if the brand added the 9-watt pairs they used for the Dell 38-inch models. However, gamers will always go with desktop speakers or headsets anyway since they are better tuned for entertainment and immersion.

The Alienware AW3821DW boasts a 38-inch IPS panel with a 3840 x 1600 resolution, a 144Hz refresh rate, and a 1ms response time. The backlight is rated at 450 cd/m2 and a 600cd/m2 HDR peak, while the contrast ratio is listed at 1000:1 like most IPS panels. This model is HDR 600 certified and it has edge-lit local dimming for better HDR performance than most gaming monitors. 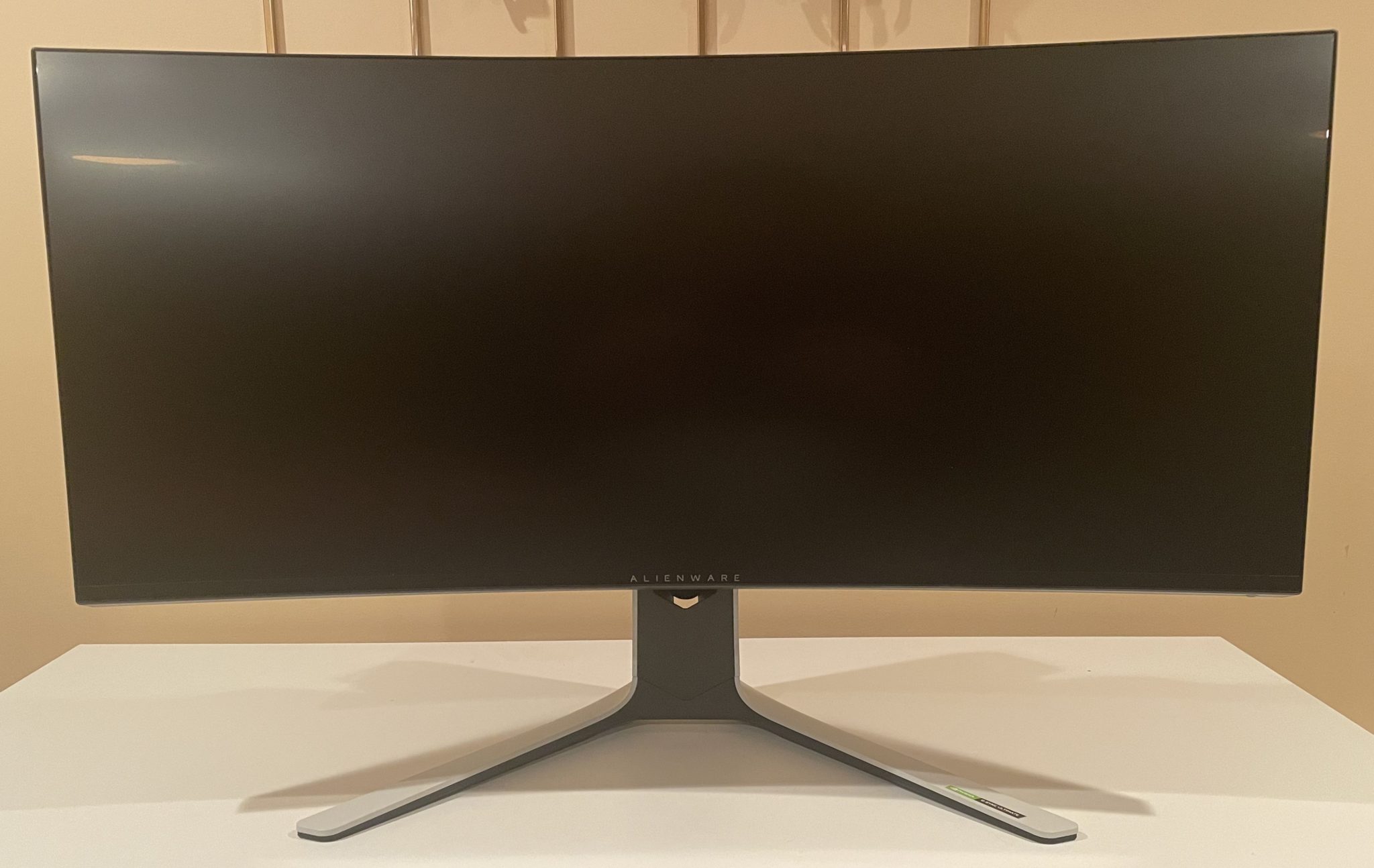 The Alienware AW3821DW has plenty of pixels per inch so it won’t look fuzzy like some oversized 1080p variants. It doesn’t look too sharp like 4K monitors since the pixels are spread out over a larger area. It’s great for productivity and gaming, but take note that you need a potent GPU to keep your framerate high in this resolution. 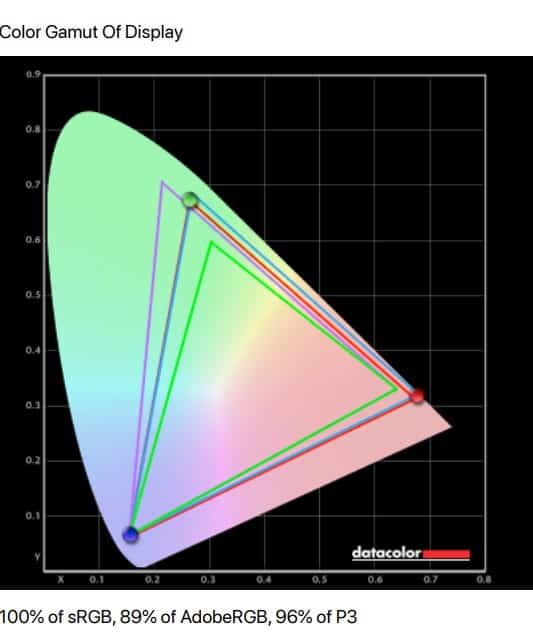 The Alienware AW3821DW is capable of fantastic color starting with its 100% sRGB and 96% DCI-P3 coverages for superb vibrancy. Its color accuracy by default isn’t perfect with an average delta E of 1.69, but it isn’t the worst. The screen is tuned to be a bit cooler than the usually warmer sRGB monitors we’ve seen, and it is quite common for HDR monitors. 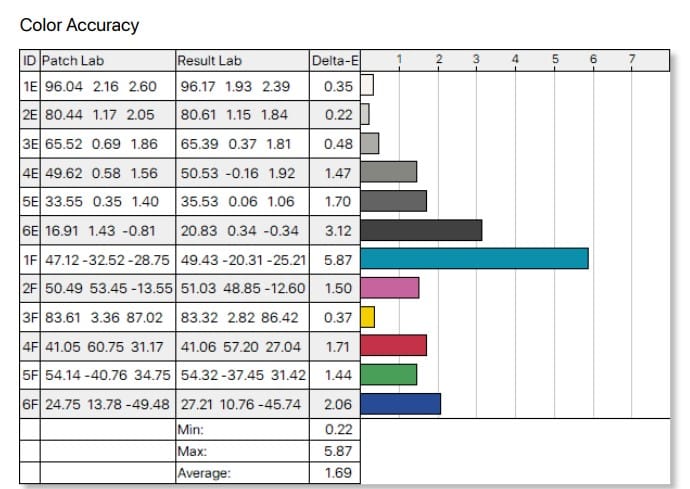 Calibrating the Alienware AW3821DW is beneficial since it dropped dE average to 0.75 which is fantastic for a gaming variant. Doing so will make the product suitable for color-critical work such as photo editing and content creation. But do take note that this monitor doesn’t have an sRGB preset so you can’t lock down its extended gamut.

The Alienware AW3821DW can get searingly bright since its backlight maxes out at 499 cd/m2 in SDR. However, its HDR brightness fails to impress since it can only reach 545 cd/m2 in some instances. The contrast ratio is also quite limited at 925:1 at 40% backlight, so the monitor’s HDR performance isn’t notable.

Panel uniformity for the Alienware AW3821DW is mixed since its local dimming can sometimes add some blooming in select zones. The panel itself didn’t show any outrageous backlight bleeding, but that can vary between every unit. Most of these issues aren’t present in full-color images, but dark scenes can reveal some flaws in the screen’s quadrants.

The Alienware AW3821DW’s pixel response time is great and its motion handling looks very smooth. Setting the overdrive to its Fast setting cleans up the minor persistence, especially if it’s at 144Hz. The monitor’s overdrive has higher settings, but both will induce visible overshoot so they aren’t recommended.

The Alienware AW3821DW is a G-Sync Ultimate gaming monitor with the v2.2 module that necessitates a quiet cooling fan. It also works with AMD’s FreeSync unlike older G-Sync monitors, but it only works on the DisplayPort slot. Input lag sits at a little over 4ms at 144Hz so that most users won’t notice any delays whatsoever.

Thoughts on the Alienware AW3821DW

The Alienware AW3821DW is a fantastic gaming monitor that we would personally buy because of its superb colors and design. It’s not the fastest ultrawide, but most users would be hard-pressed to see blurring or feel delays in games. We love the 2021 aesthetic that is used with this monitor since it’s quite aggressive, but it isn’t tacky.

There is very little to complain about the Alienware AW3821DW other than its price tag and missing creature comforts. Its worst aspect is its limited HDR performance which falls short of its HDR 600 certification. It’s a great buy, but the latter might be a deal-breaker considering how expensive this monitor is on the market.