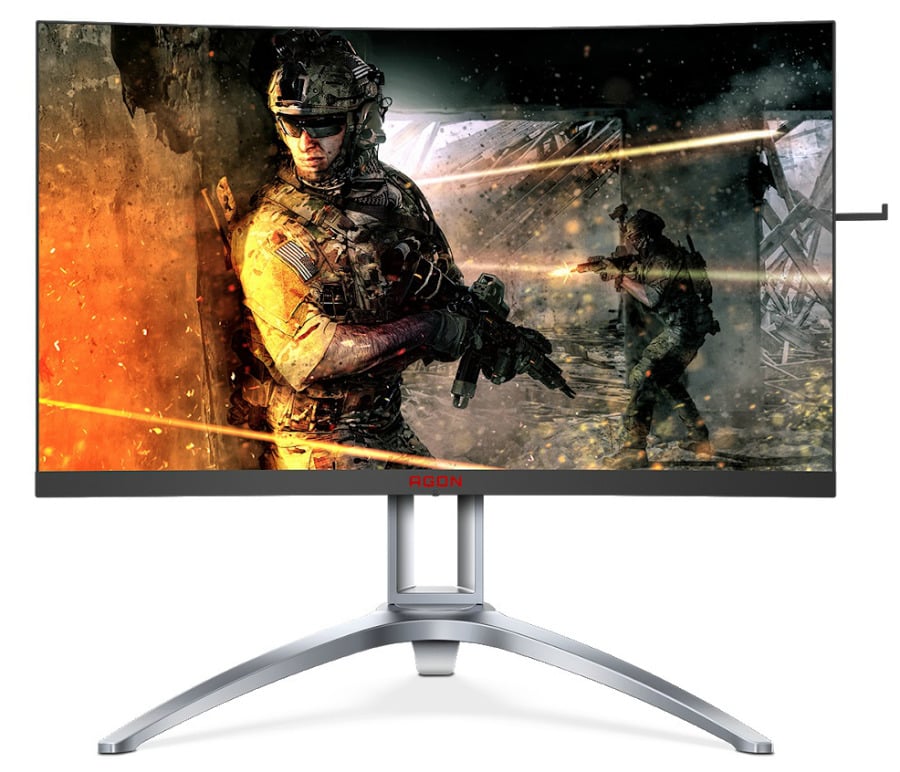 The AOC AG273QCX is designed for enthusiasts who want responsiveness and excellent image qualities in a gaming monitor for an engrossing experience. This redesigned variant in the AGON 3 line offers new additions in its spec sheet such as HDR10 compatibility and FreeSync 2 to create a renewed visual experience. We’ve seen great things with the G-Sync variant, but how does the FreeSync-enabled AOC  AG273QCX stack up? 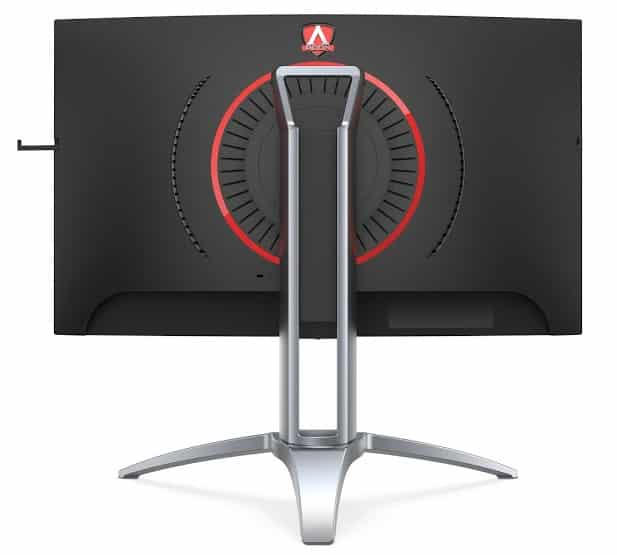 The AOC AG273QCX retains the overall aesthetic of the AGON series, although it carries over refreshed aspects we like. For starters, the display is now bezel-free on three sides, giving the monitor a sleek and cleaner look. AOC also dropped the glossy plastics in favor of mattes which is easier to maintain.

The cabinet for the AOC AG273QCX is shared with the AG273QCG we presented earlier. There is a fold-out joystick hanger at the side and a uni-directional joystick at the bottom for the OSD. However, this model does not feature the AGON Game Light found on the G-Sync variant.

There is, instead, a glossy decorative ring made of red plastic to keep up with the gamer-centric aesthetic of the monitor. At the middle sits the attachment point for the stand which also doubles as a VESA adaption point for your aftermarket armatures.

Another critical feature of the AGON monitors such as the AOC AG273QCX is an included OSD remote called AGON GamePad. This gadget amplifies the convenience in OSD manipulation which AOC is keen on. Frankly, it isn’t a necessity, but it will be handy during intense sessions.

The AOC AG273QCX leaves the old “penguin feet” stand behind in favor of a chunkier variant based on what its ultrawide siblings include. This device should be as durable as a tank since it’s made of metal, but it will eat up a lot of space on a desk. At least its fully flexible with tilt, swivel, and height adjustments.

Since the AOC AG273QCX doesn’t have the connector restrictions of its counterpart since it is based on FreeSync 2 technology. On its I/O layout, you will find two DisplayPort 1.2a slots and dual HDMI connectors for video inputs. There is also a USB 3.0 Hub with four full-sized slots and a single mini USB port for the AGON GamePad.

The AOC AG273QCX sports a 27-inch curved VA panel from Samsung with a 2560 x 1440 resolution, 144Hz refresh rate, and 4ms response time. A 400cd/m2 WLED backlight and 1000:1 contrast ratio is specified for excellent depth and saturation. The monitor is HDR10-compatible, particularly with the HDR400 VESA standard which is considered as the bare minimum.

QHD screens are a perfect fit for 27-inch variants since they create outstanding sharpness and clarity without minimizing everything. Monitors like the AOC AG273QCX are even suitable for office work since most users won’t need scaling to read text. The only questionable characteristic here is the curve which is less apparent since 27-inch displays aren’t that big, to begin with.

The AOC AG273QCX posts an incredibly vibrant color output of 115% sRGB or around 90% DCI-P3 which is in line with HDR standards.  Accuracy could use some improvements due to the high DeltaE 3.3 which is mainly caused by poor gamma tracking which looks closer to 2.0 than 2.2.

What remains excellent by default on the AOC AG273QCX is its backlight with a peak of 420cd/m2 and a contrast ratio of 3020:1. The display can display deep, inky blacks with excellent grayscale performance to boot. Lowering the brightness to the recommended level helps tremendously, but be warned since this model is brighter than similar variants at its lowest backlight output.

The AOC AG273QCX’s uniformity is within reasonable limits since there is a maximum deviation of 12% in brightness on the sides. Thankfully, it doesn’t affect color uniformity on all quadrants which stayed within DeltaE 2.5 of one another. These numbers dictate that variances are not immediately noticeable when using the screen, but take note that it could vary between unit to unit.

Motion handling on the AOC AG273QCX isn’t as good as we hoped due to the ghosting we noticed when there are dark to light transitions on the screen. Setting the overdrive to its maximum level is recommended to help the monitor alleviate this issue. There is a bit of overshoot, but its barely noticeable compared to the ghosting we saw at default settings.

These results tell us that the AOC AG273QCX is fantastic for immersive or story-driven titles like The Division 2 or Sekiro Shadows Die Twice. Competitive gamers have to turn to the AG273QCG which has faster pixel transitions but is limited in vibrancy and contrast.

The AOC AG273QCX’s HDR feature brought us mixed feelings since activating it locked out a lot of the OSD’s features. You are left with HDR filters which oversaturate the image too much except for the Default HDR preset which adds a nice level of detail to compatible games. However, we recommend turning it on and off manually if you are viewing and gaming in HDR or SDR respectively.

Finally, the AOC AG273QCX is a FreeSync 2 monitor with a 48Hz to 144Hz variable range. It’s also G-Sync compatible, but you’d have to live with a 55Hz to 120Hz or 60Hz to 144Hz range if you activate this feature. Input lag averages at 6.5ms, so there are no delays or “de-synced” scenarios when gaming.

Thoughts on the AOC AG273QCX

The AOC AG273QCX is an excellent gaming monitor overall, but it has a few quirks which may turn-off meticulous buyers. The slow pixel response time makes the model less ideal for competitive titles, but the excellent vibrancy and limited HDR capability makes it great for RPGs or story-driven titles. We’ve always loved AOC’s gaming designs due to the nifty extras they add which to us, increases the value per dollar of any product.

The AOC AG273QCX slots into the middle of the pack when it comes to pricing. You can get something cheaper which will perform better in motion handling, but most are TN-based and less vibrant. In this case, we think the pros outweigh the cons slightly, so we can recommend this model as a great upgrade for your battle station at home.