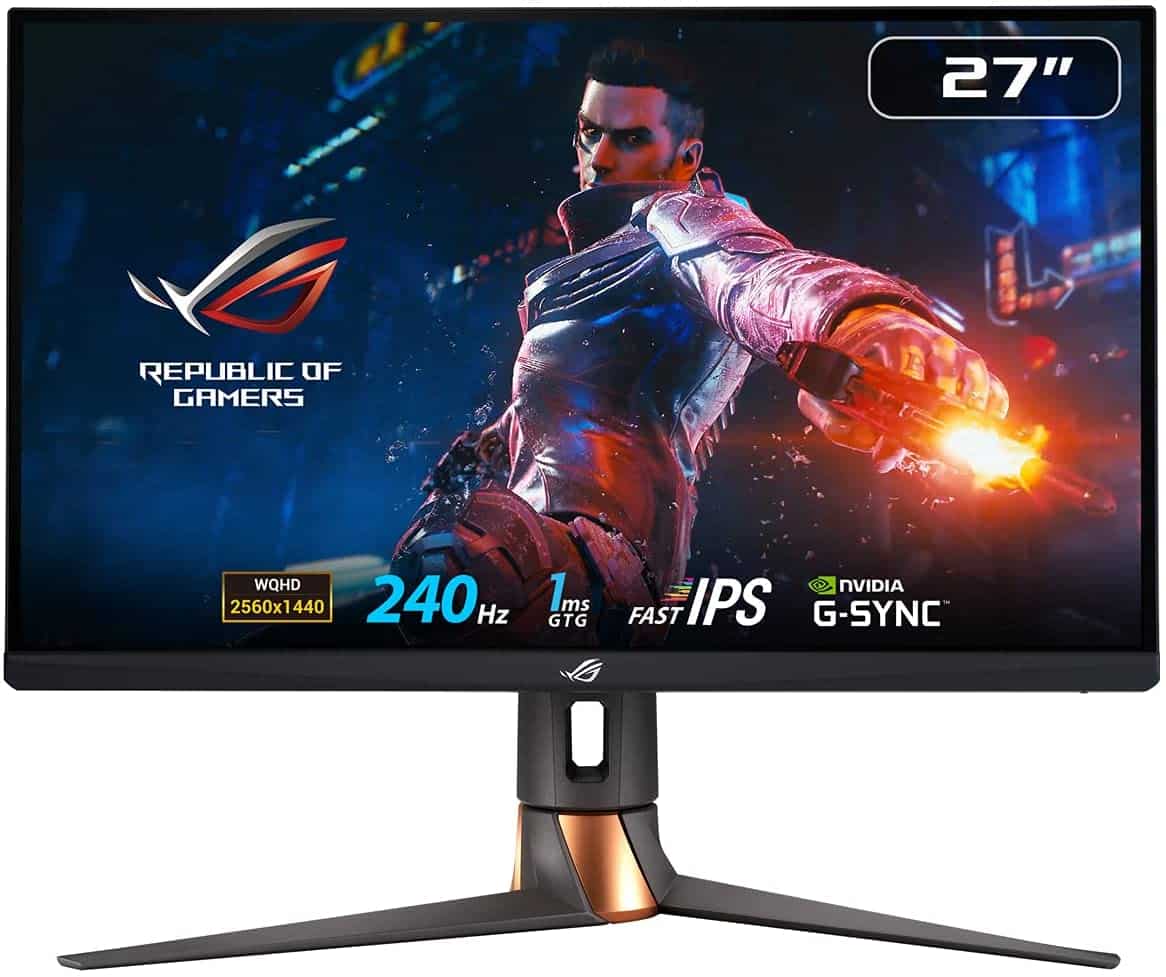 The Asus PG279QM is a high-performance gaming monitor designed for enthusiasts who want an E-Sports-level experience without sacrificing visuals. The monitor incorporates Nvidia’s latest technologies like the Alienware AW2721D, making it perfect for RTX 30 Series owners who expect an upgraded experience. Let’s check out if the Asus PG279QM is a solid investment for discerning gamers who want the best in the market. 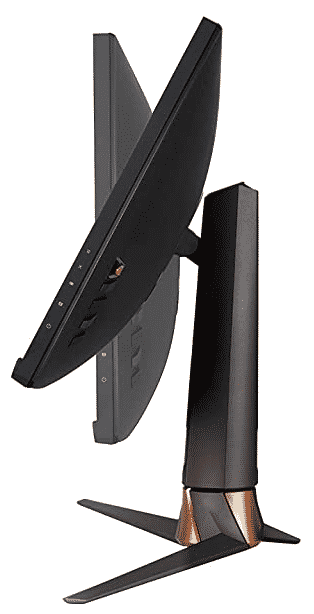 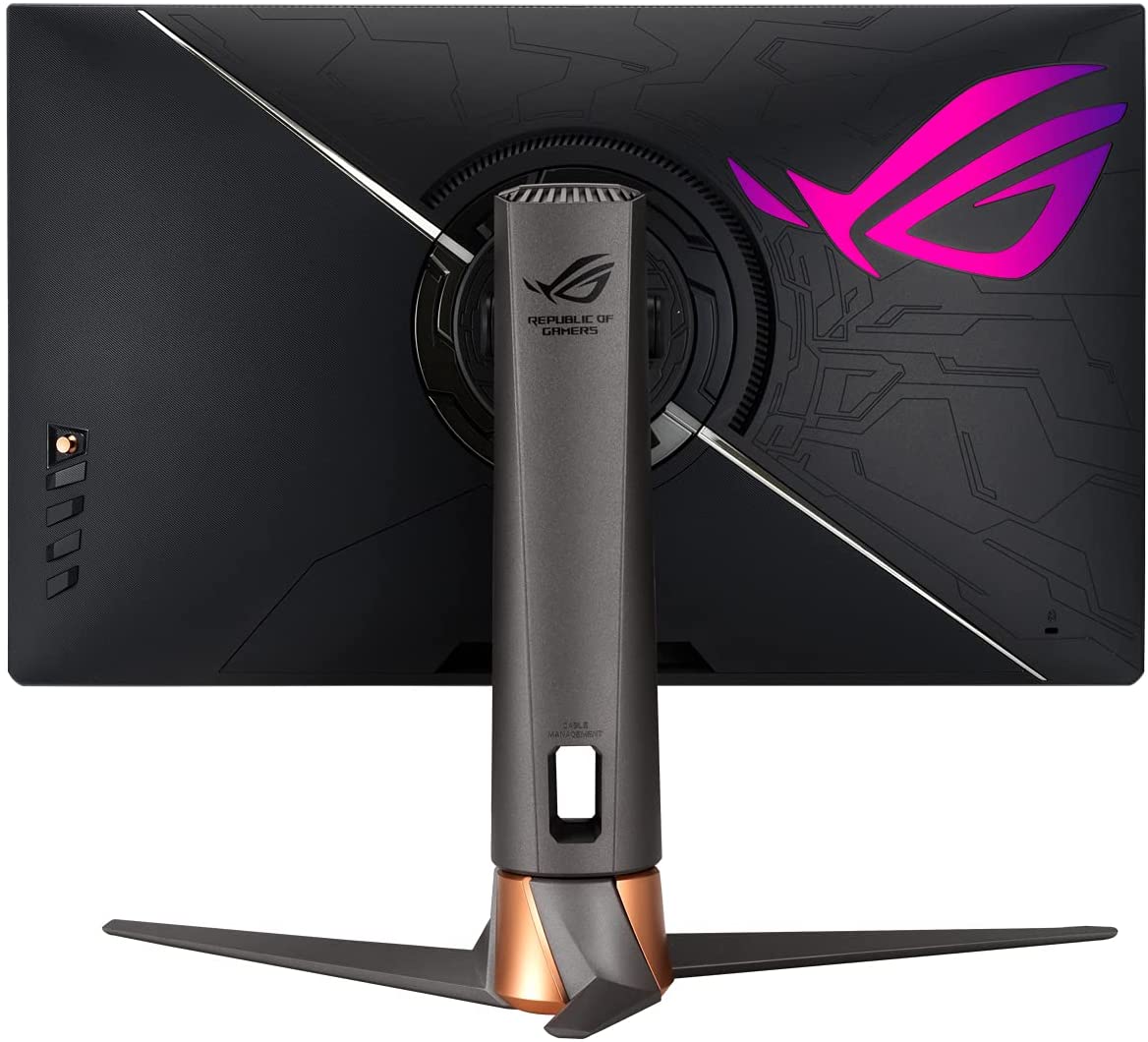 The Asus PG279QM starts out as most ROG Swift monitors with the signature aesthetic treatment you’ll find on its flagship models. The device has a matte black chassis matched to a gunmetal stand with a bronze accent, which makes it identifiable as a flagship. The display is bezel-free on three sides, but you will still see inner borders when it’s in use.

27 inches isn’t too big by today’s standards, but the Asus PG279QM somehow needs a bit more space from your desk. It’s ten inches deep due to the beefy stand, so streamers with lots of peripherals might need to move things around a bit. It’s also quite heavy for its size, but that only means that it’s a heavily reinforced monitor that’s designed to last.

Build quality for the Asus PG279QM is amazing as expected from the brand’s upper-tier ROG Swift line. The plastics used are thick and rugged, so you won’t feel any flexing or suffer from cracks after a while. The stand’s adjustment point is firm and steady so it will keep the view angle you’ve set without any wobbling at all.

Another unchanged feature of the Asus PG279QM is its control layout which Asus monitor users are quite familiar with. You get an OSD joystick along with hotkeys for the monitor’s features such as its overlays and presets so making the most out of it is easy. Other brands already feature remotes and apps for their functions, but it’s unnecessary if the layout is as easy to use like this one here.

The Asus PG279QM also has the distinctive ROG eye logo with RGB LEDs at the back of its housing. It’s a nice feature to have if you have Asus Aura-compatible gear, but it is purely decorative in our books. It can’t be used as a bias light for eye comfort due to its position, and most will feel that it’s unnecessary since it is at the back anyway.

The beefy stand included with the monitor offers tilt, swivel, pivot, and height adjustments for your convenience. It’s easy to get a preferred and comfortable view angle, and you can be certain that the display won’t sag after some time. You can use VESA mounts, but it is unnecessary unless you need to save space or have multiple monitors on your desk.

The Asus PG279QM has more connectivity options than predecessors like the Asus PG278QR which was limited by the old FPGA controller design. You get DisplayPort 1.4, three HDMI 2.0 ports, and three USB USB 3.0 ports with this model. That’s not a lot, but it’s an upgrade over the old DP 1.2 and HDMI 1.4 combo which limited the older G-Sync variants’ usability.

You also get a pair of speakers with the Asus PG279QM which rounds up its already impressive spec sheet. However, they only get 2 watts of power so they aren’t usable for games and movies due to their tinny sound. We reckon it’s time Asus upgraded its built-in speakers, especially for high-end or flagship models like this one.

The Asus PG279QM sports a 27-inch IPS panel with a 2560 x 1440 resolution, a whopping 240Hz refresh rate, and a 1ms GTG response time. The backlight has a 350 cd/m2 output and a 400 cd/m2 peak, while the contrast ratio is still at 1000:1 like most IPS panels. This model advertises HDR 400 capabilities with edge-lit local dimming, but it is considerably limited versus other implementations on models like the PG32UQX.

The Asus PG279QM’s size and resolution make it the perfect sweet spot for gaming and productivity. You will enjoy an increase in sharpness and detail, but working on documents and browsing doesn’t have to suffer since visibility and legibility are still excellent. 1440p monitors are still very popular even if 4K is now more marketable, especially in this segment.

The Asus PG279QM covers more than 100% sRGB and around 96% DCI-P3 which equates to vibrant colors in games and movies. Its default accuracy has a deltaE average of 1.49 which means it’s ready to use out of the box. Take note that these results were taken with the sRGB mode active, although it is surprisingly good that it doesn’t lock out other adjustments like the brightness setting.

Calibrating the Asus PG279QM improved its dE average to  0.98 which is even better and suited for editing work. You are going to need a colorimeter to squeeze this result out, so it’s unnecessary in most cases. Most users will be happy with the sRGB mode followed by personal tweaks to the brightness to get a preferred look.

The backlight on the Asus PG279QM reached 379 cd/m2 in SDR and a 516 cd/2 peak when HDR is active. Its contrast, however, isn’t impressive since it only managed to reach 987:1 in SDR and around 1341:1 in HDR. These are not impressive results, but the monitor isn’t equipped to produce true HDR anyway like the more expensive models out there.

Panel uniformity for the Asus PG279QM is great since there are no considerable light leaks or clouding issues. The sides have some contrast loss, but it’s not noticeable unless you put the monitor under extreme scrutiny. Take note that this could vary between every monitor made due to tolerances and the nature of IPS technology.

The Asus PG279QM is capable of excellent motion handling by default thanks to its refresh rate and Fast IPS panel. Setting its overdrive to its E-Sports mode boosts the screen to remove all persistence, although there will be some very minuscule overshoot in return. You can also choose its Normal mode which does a good job, so we recommend testing these modes out to find which is best for you.

The Asus PG279QM is a G-Sync gaming monitor with an exclusive built-in controller, but it also works with FreeSync. Nvidia has finally let go of its exclusivity, although you get useful features like their Reflex Analyzer technology if you go with a GeForce card. Input lag sits at 3ms at 240Hz, so there is no need to worry about delays while enjoying your favorite titles.

Thoughts on the Asus PG279QM

The Asus PG279QM is an excellent choice if you indulge in both eye-popping, immersive titles and E-Sports games. The monitor is lightning-fast, but it also provides rich colors and smooth overall performance. It is one of the best 1440p monitors you can get, although we think the ROG Swift line is due for a redesign.

We have very few complaints about the Asus PG279QM and most of it is connected to the panel’s inherent characteristics such as its low contrast. You also can’t expect comprehensive HDR performance from it since it is not equipped with a FALD unit like the PG32UQX. However, we think that it’s a worthy successor to the well-loved PG279Q when it comes to overall performance and design.

Search
NEW
POPULAR
You are here: Home / Reviews / Asus PG279QM Review – Top-End 240Hz 1440p Gaming Monitor with G-Sync – Editor’s Choice
This website uses cookies to improve your experience. We'll assume you're ok with this, but you can opt-out if you wish.Accept Read More
Privacy & Cookies Policy