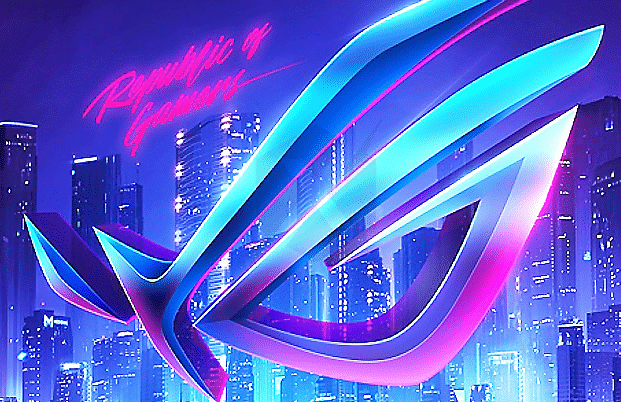 Asus ROG at Gamescom 2019 unleashed a trio of gaming monitors for enthusiasts which feature new technologies and radical designs. These new variants present the kind of evolution the brand is bringing to the market to enhance your gaming experience.

You’ve already seen some of the common specifications such as refresh rates in currently available monitors like the Asus PG27UQ or the XG258Q. However, their “Intelligent Evolution” catchphrase for these new offerings, so let’s take a peek at what’s to come. 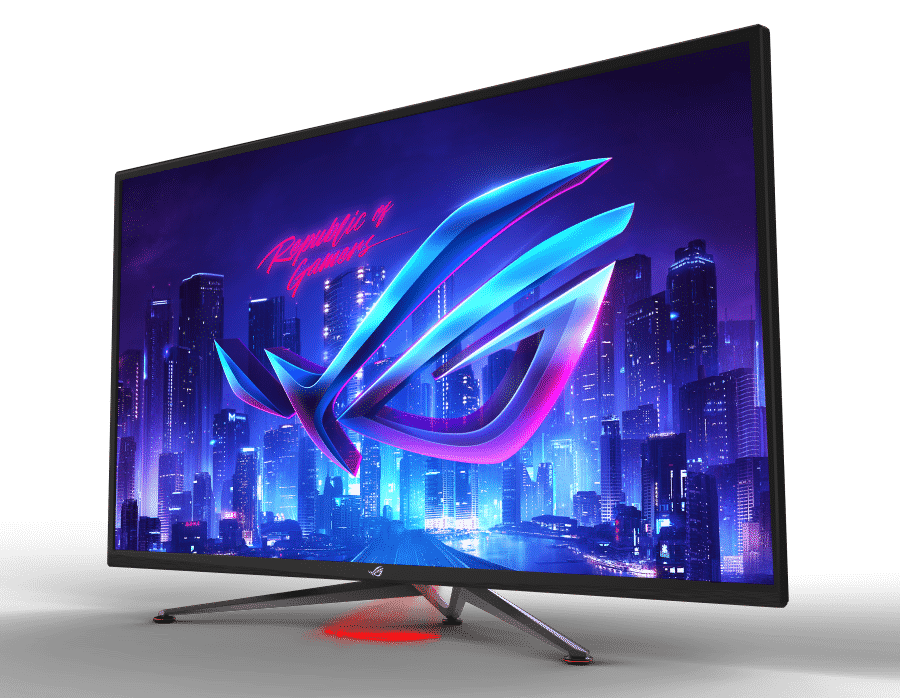 One of the main characteristics Asus ROG put emphasis on is DSC or Display Stream Compression on their latest slew of high-end monitors. DSC is an industry-standard process of compression for UHD video streams using a single, high-speed interface with no visible loss of image quality. DSC is also responsible for variable refresh rates and HDR via a single high-bandwidth port.

The Asus ROG Strix XG43UQ DSC gaming monitor uses this technology to provide stunning levels of detail without sacrificing speed. 4K at 144Hz via DP 1.4 without sub-sampling is now possible via these new models thanks to this evolution. The monitor is also DisplayHDR 1000-compliant with its specialized backlight and 90% DCI-P3 coverage.

The Asus ROG Strix XG43UQ is a combination of new tech that is meant to replace your competitive gaming monitor for PC and the TV for console gaming. The whopping 43-inch screen provides a visual experience that will swallow your senses. Of course, the signature ROG aesthetic treatment with Aura Sync RGB is present so you can maintain your ROG theme.

The Asus ROG Strix XG43UQ will also be FreeSync2 HDR-compatible, so gamers can enjoy latency-free, buttery smooth visuals. This feature is critical for a monitor like this since the resolution will eat up a lot of GPU horsepower. 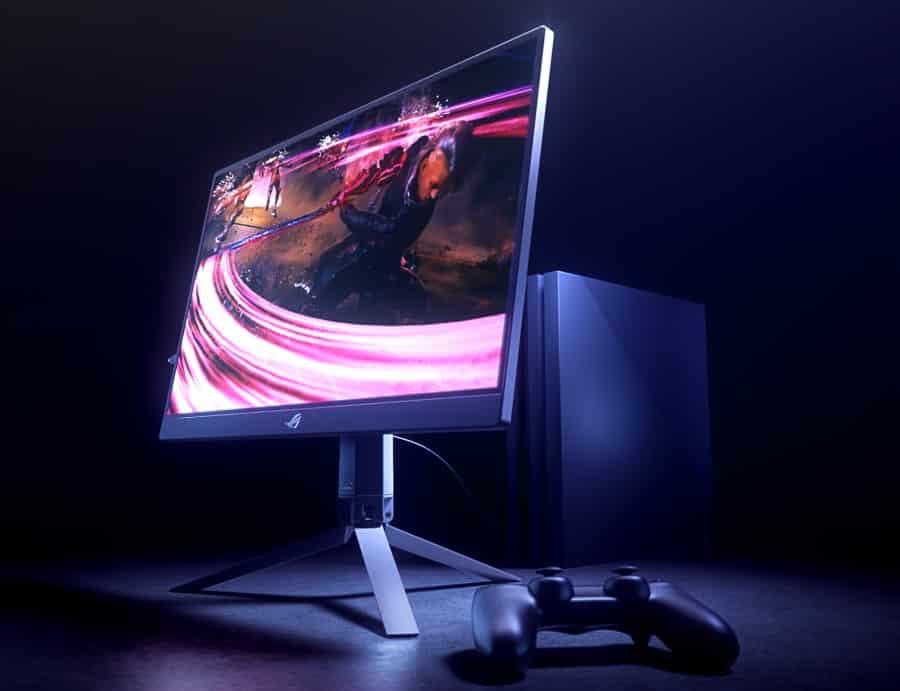 Asus is one of the best names in the portable display market, but they are looking to sit at the top with the Asus ROG Strix XG17. This model features a 17.3-inch IPS screen with a 1920 x 1080 resolution, a blazing 240Hz refresh rate, and 3ms response time. The specs are similar to what their latest ROG laptops carry, so it isn’t too far-off that these panels are either identical or a variant of the other.

The Asus ROG Strix XG17 isn’t merely a display that you need to plug into a USB slot since it carries a built-in battery in the slim frame. An hour’s worth of charging will give you around 2.7 hours of game time, with a full battery going up to more or less three hours. All the hardware is packed into a 1-KG frame which is very easy to slip into a laptop bag and carry around.

The Asus ROG Strix XG17 when first revealed used a flip-top cover as a stand, but it now comes with a ROG tripod for better support and stability. The mechanism also features full flexibility, so you don’t have to make do with a rigid display while gaming on the go. The ROG tripod also makes it convenient to position the screen on top of your device, whether if its a laptop or once of the next-gen consoles.

FreeSync is also part of the Asus ROG Strix XG17’s specifications with a functional range of 48Hz to 240Hz. But the product isn’t limited to functionality, thanks to its distinct ROG Strix design that includes an RGB eye logo and a very attractive brushed metal texture used on the brand’s high-end laptops. 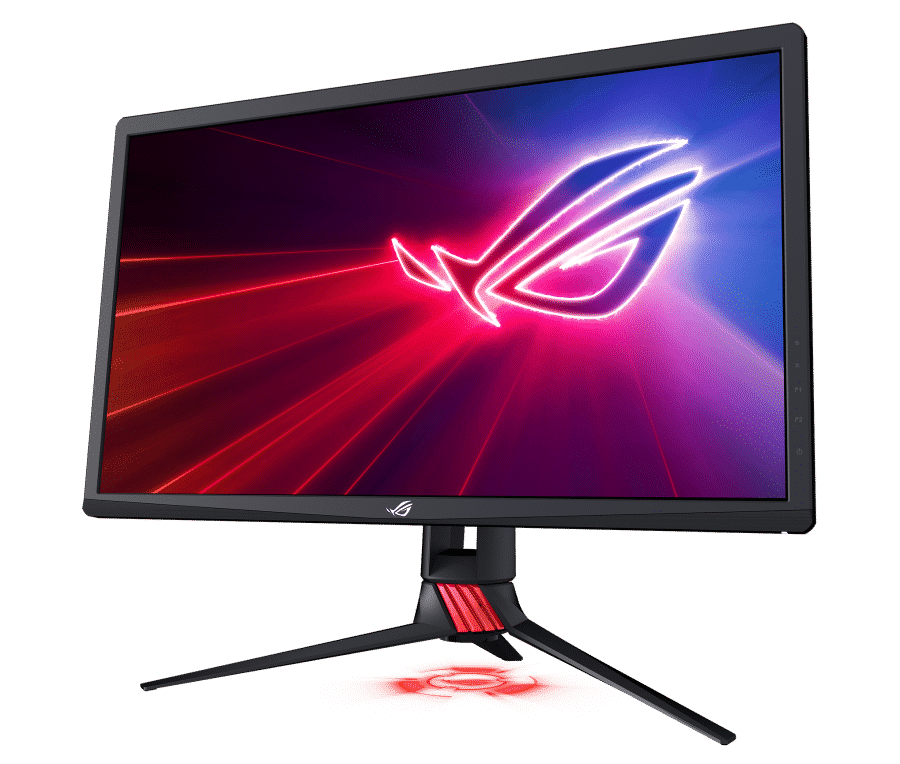 The Asus ROG Strix XG27UQ is the long-awaited FreeSync2 counterpart for the PG27UQ which has a stunning, 4K 144Hz IPS panel and DisplayHDR 1000 compliance. This new variant, however, only offers DisplayHDR 400 since it doesn’t have the FALD backlight of the PG27UQ. Either way, the specs are nothing to sneer at since this model still uses a Quantum Dot-treated IPS panel with a wide, 90% DCI-P3 coverage and a full 144Hz refresh rate.

DSC or Display Stream Compression is, again, a key ingredient for the Asus ROG Strix XG27UQ since the bandwidth needed for 4K 144Hz is too much for DP 1.4. However, unlike the PG27UQ, you don’t need to step down to 120Hz here to avoid chroma subsampling. This characteristic will allow gamers to enjoy the full capabilities in speed and color rendering the monitor is capable of.

This new SKU will follow the Strix design which is basically a red-accented version of the 2nd generation ROG treatment. You will get a fully ergonomic stand, along with an RGB-equipped chassis that will complete your ROG setup. 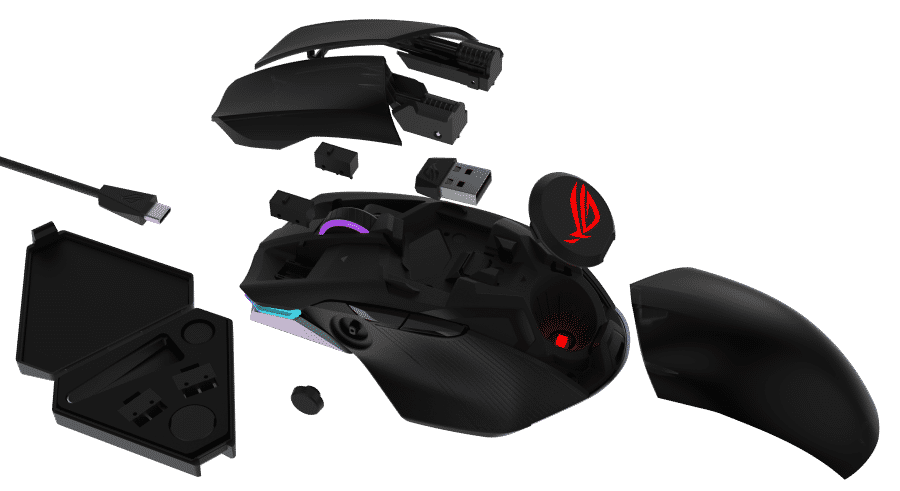 Asus has been very competitive in the market with their gaming gear, but they are ramping up their attempt for a larger market share with wireless offerings. The ROG Chakram is a newly-designed, ergonomic optical mouse with Qi wireless charging so you won’t need to swap batteries in the heat of battle. You can also charge it by wire, and 15 minutes of that will give you up to 12 hours of gameplay.

The ROG Chakram features three connectivity options which include wired, 2.4GHz, and Bluetooth for maximum flexibility. The optical sensor used is an advanced 16,000 DPI, 400-IPS variant for extreme accuracy and smooth tracking. The mouse features the usual buttons such as the DIP switch, but it also features a built-in joystick for fantastic control. 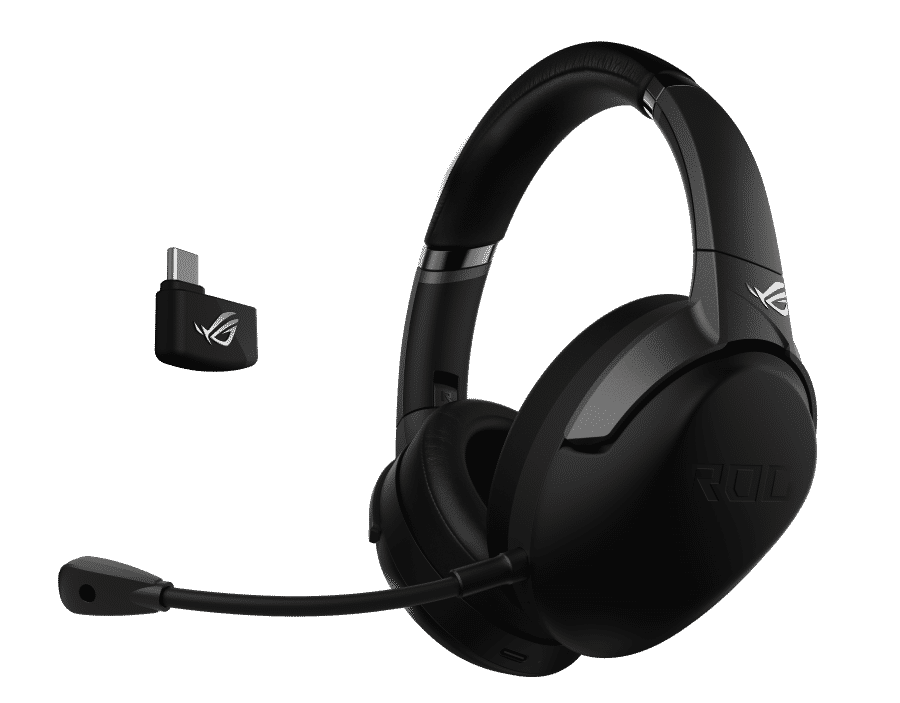 The ROG Strix Go 2.4 Wireless gaming headset is another peripheral that is aimed at setting you free while you game. The pair comes with a USB-C 2.4GHz adapter for a more stable connection and less latency. The 40mm drivers built into the ROG-designed chamber provides lifelike audio, while the AI-powered noise-canceling microphone takes care of precise comms.

Comfort is another key aspect of the Asus ROG Strix Go 2.4, so the brand’s engineers limited its weight to around 290g. The folding design makes the peripheral portable, while the streamlined headband should have a softer clamp on your noggin.

Editor’s Note: You can visit the official page for the Asus ROG Gamescom press release by clicking this link. Most of the products already have product pages, but pricing and final release dates are forthcoming.
About the Author: