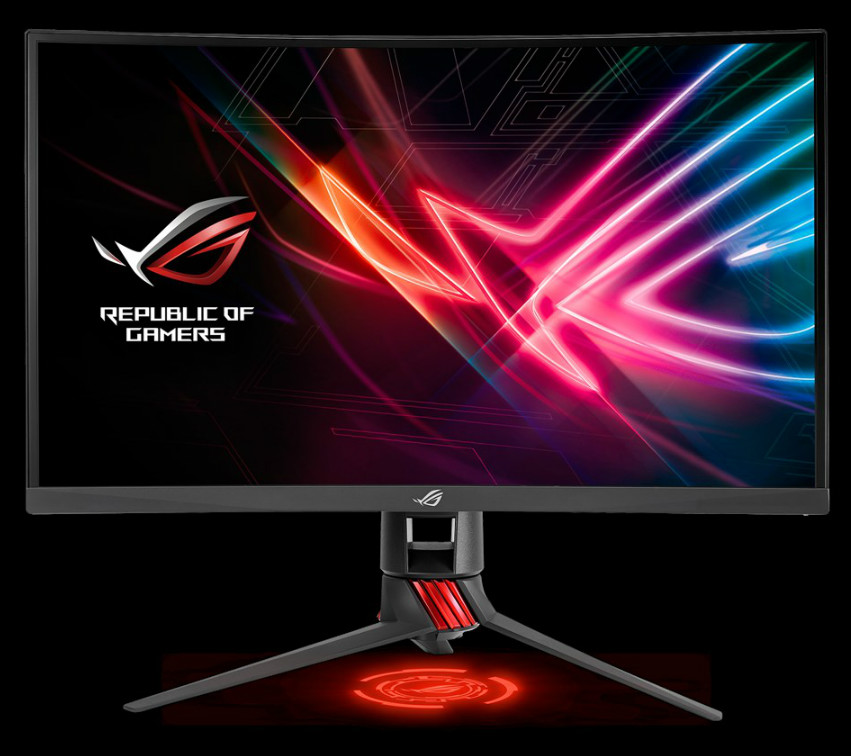 The Asus XG27VQ was designed to offer an easy to own, high-performance monitor which offers 144Hz refresh rates and FreeSync packed with unique aesthetics. Asus became more aggressive with gamer-centric designs, but the company never forgot about maximizing performance and build quality of their products. The Asus XG27VQ fits in a new series tagged with the Strix moniker, but we are expecting ROG Swift levels of gaming goodness from this promising monitor. 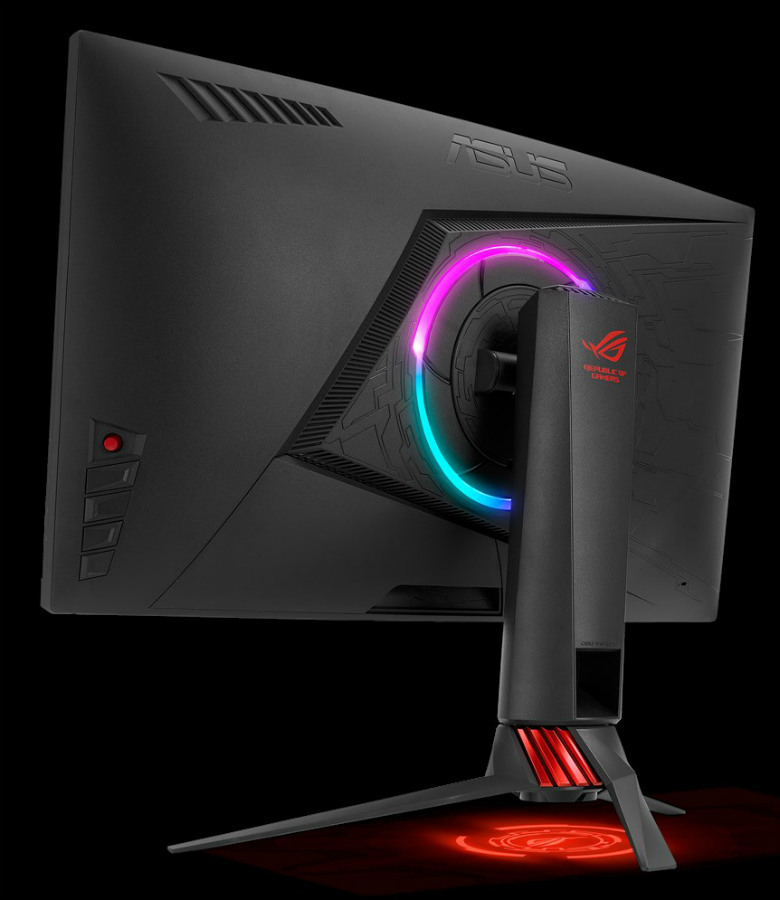 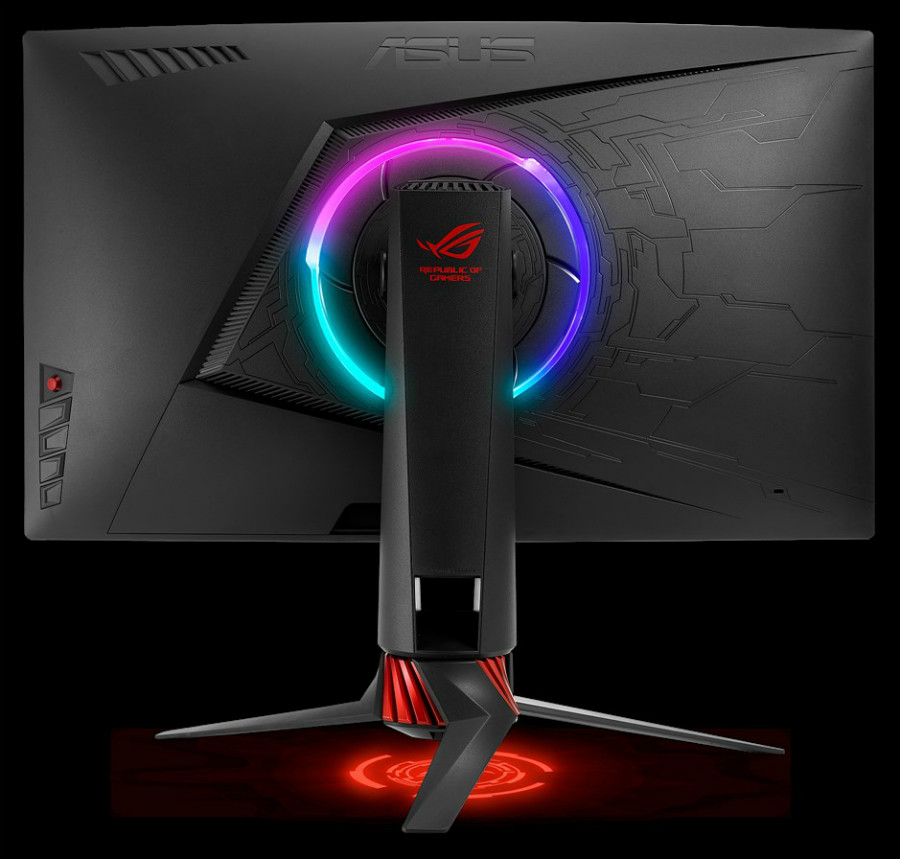 The Asus XG27VQ builds up on aesthetics by adopting the second generation ROG treatment which features a matte gunmetal color with red accents and the signature helix stand. The screen doesn’t have bezels, but instead, it uses a two stage design comprising of a thin outer layer and almost invisible panel borders. The face looks simple, but if you want a minimalist setup, you might need to do away with the stand and choose VESA mounting.

The rear of the Asus XG27VQ holds most of its aesthetic value, an aspect which we will see on all of the newer gaming monitors the company is producing. Using the vents angularly creates a distinct look which centralizes around the LED ring for Asus Aura effects. You synchronize this feature with other Aura equipped items such as motherboards, GPUs, or even computer casing as well.

Of course, it isn’t all looks, and we can see that the LED ring will find a practical use for bias lighting, to help prevent your eyes from getting saturated with the screen’s glow. For RGB fans, the Asus XG27VQ will look amazing, but for those of us who prefer calmer ambient lighting, being able to set a matched color to the rest of the rig is fantastic in itself.

Take note that for you to enjoy the benefits of the Aura Sync RGB LED at the rear, the Asus XG27VQ needs to sit close to a wall. For the best results, try to situate this monitor at least a foot or less to the nearest surface.

Since the Asus XG27VQ has a lower price than previous generations, the company also decided to downplay the generous layout we have come to expect from FreeSync monitors. For video inputs, you can use DisplayPort 1.2, HDMI 1.4 or DVI-DL with a connector each, but there are no extras like USB ports. There are no speakers either, but we like the fact that you can hide the ports since this model comes with a removable panel cover.

But when it comes to other functionalities, the company did not skimp on what the Asus XG27VQ can offer. You get the signature helix stand complete with a customizable LED projector at the bottom and a smart cable management hole. It will also be easy to get a comfortable view of the screen thanks to height, tilt, and swivel adjustments, although you can’t pivot it since you won’t need to on a curved display.

The Asus XG27VQ sports a 27-inch VA panel with a 1920 x 1080 resolution, 144Hz refresh rate, 4ms response time, and a 3000:1 contrast ratio. The screen is supported by a 300cd/m2 backlight for sufficient brightness. The screen’s 1800r curve feels more aggressive due to the size which indicates that the immersive effects are there as long as you sit close enough.

Out of the box, the Asus XG27VQ is able to produce 96% sRGB with a semi-decent accuracy of Delta E 3.10. The gamut volume is disappointing for a VA panel, but over all the looks of the screen are acceptable for gaming standards. These accuracy score can improve to around DeltaE 2.5 with a little OSD tweaking, but you can take it further to DeltaE 1.9 if you have a colorimeter.

But on a positive note, the Asus XG27VQ’s contrast levels reach a ratio of 2600:1 which exceeded our expectations. This gives screen the deep and satisfying blacks and hues we crave from a gaming display. If there was one thing Asus missed from the XG27VQ’s spec list, it would be the maximum brightness. Our tests revealed that the WLED backlight can only go up to 270cd/m2 instead of 300cd/m2.

The Asus XG27VQ isn’t dead accurate to make it ideal for color critical work, but it is a full-time gaming monitor. The combination of the size and the tight curves can give gamers the extra thrill of engrossing visuals, while the brand’s signature Strix treatment takes care of the aesthetic side. But when it comes down to it, responsiveness and smoothness are what matters most.

Thankfully, the Asus XG27VQ does exceedingly well at both points. The display only has an input lag time of 8ms which makes it suitable even for E-Sports applications. When playing games like Overwatch or PUBG, gamers would be hard-pressed to find delays in between control inputs and the screen itself.

AMD GPU users also get to enjoy the benefits of VRR tech for buttery smooth and tear-free visuals with the FreeSync-capable Asus XG27VQ. The range of 48Hz to 144Hz falls short when compared to other products, but we don’t think it would matter since this still is a 1080p monitor. FHD is easy as peas for the Polaris and Vega cards, after all.

But there is the issue of unwanted image retention and ghosting which some users may notice on the Asus XG27VQ. We can say that this defect doesn’t easily manifest in this model. The monitor includes a BLur Reduction feature if in case you notice some trailing or ghosting during game play.

Finally, the Asus XG27VQ is one of the Asus Display Widget-compatible monitors in the brand’s expansive stable. The app offers many features which include the ability to automatically swap between color filters depending on which game or program you launch.

The Asus XG27VQ is a particularly excellent choice for a 1080p gaming monitor thanks to its awesome combination. The curved display and the aesthetics maximize the impact of the product on the overall gaming experience and your setup. The screen may have missed a few points in imaging fidelity, but its responsiveness, blur reduction, and FreeSync implementation more than make up for the flaws.

Another great aspect of the Asus XG27VQ is it’s also reasonably priced for what it offers at just a little over $300. Sure, the closest competitors may be cheaper by fifty bucks or so, but the monitor’s design and capabilities make it worth the extra dough. The Asus XG27VQ is a great buy if you are looking to upgrade your gaming experience and the looks of your battle station.