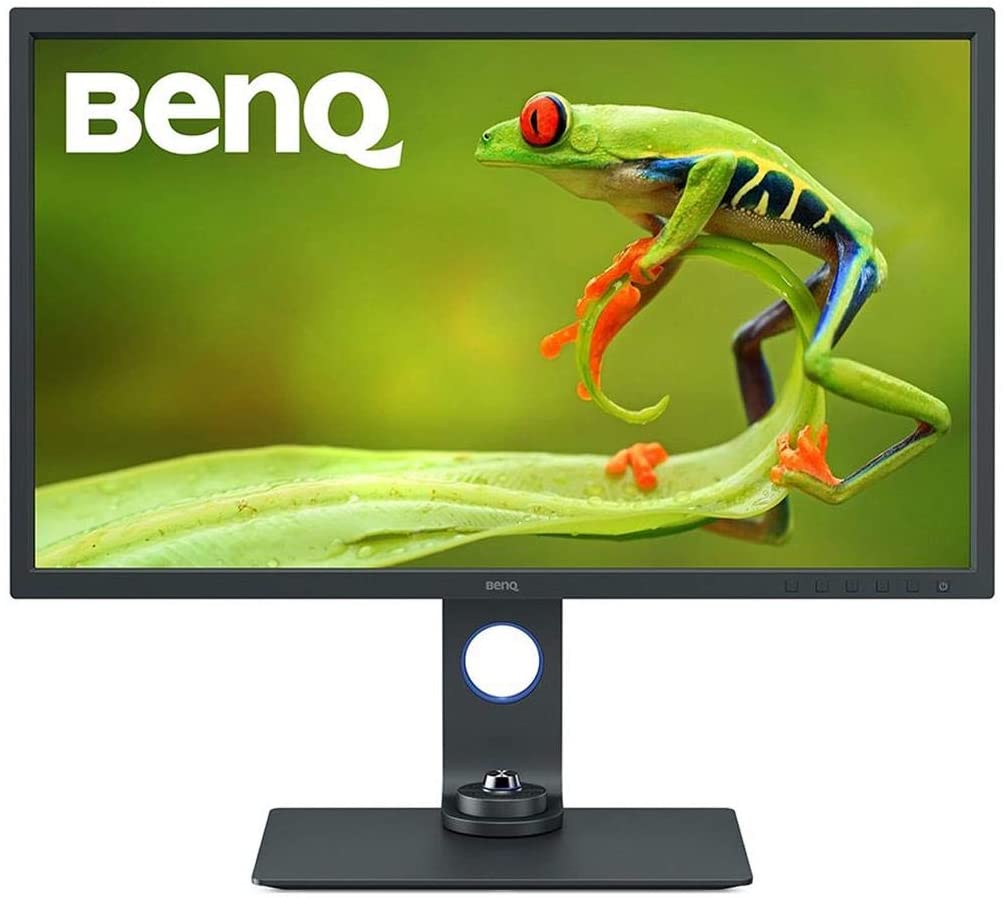 The BenQ SW321C is a sophisticated 4K monitor that’s intended for discerning enthusiasts and pros who want the best possible image quality. It carries several features that aim to bring out the best performance, plus it gets upgraded with a USB-C and AQCOLOR technology. The BenQ SW321C succeeds the SW320 at a higher price, so let’s check out if it’s worth the investment.

The BenQ SW321C goes with a robust and industrial design, but it looks dated compared to the sleek and sophisticated PD3220U. the chassis has a matte black finish that can withstand scratches and smudges, so it’s easy to keep the new look. This model isn’t bezel-free and its frame is quite thick by today’s standards so it can look unappealing for the younger crowd.

You have to make way for the BenQ SW321C since it’s quite big, so it can interfere with bookshelf speakers or full-sized keyboards if you use them. its base needs more than 13 inches of depth and it’s almost 30 inches from side to side. It’s also quite heavy at 26.01 pounds, so ask for help or be extra careful when moving it around.

Build quality for the BenQ SW321C is solid and there are no signs of weaknesses or imperfections once it’s unboxed. The plastic panels meet each other perfectly, while the device itself feels heavily reinforced to withstand breakage or accidents. We didn’t notice any wobble from the screen thanks to a firm yet malleable attachment point at the back.

It’s also worth noting that the BenQ SW321C comes with a calibration hood that can protect the screen from glare. The hood is quite big and it can be disruptive while working, but it’s completely removable. it’s a nice addition to have, but its usability is entirely up to individual users and their preferences.

One of the letdowns we saw on the BenQ SW321C is its use of OSD buttons instead of a more convenient joystick. The monitor was designed around calibration, so it doesn’t make sense to make the process more difficult. However, this model has the Hotkey Puck G2 remote which lets you access its features such as presets easily.

The stand included with the BenQ SW321C offers tilt, swivel, pivot, and height adjustments, so it’s easy to get a preferred and comfortable view. Its also robust and quite stable thanks to the excellent construction quality and its massive base. You can remove this part and go with a VESA mount, but we think it is only necessary if you have multiple monitors.

The BenQ SW321C has plenty of connectivity features, starting with its DisplayPort 1.4 and two HDMI 2.0 ports for video inputs. You also get a USB-C 3.1 connector that supports DP Alt Mode and power delivery, but it can only provide up to 60 watts of power. This allows users to utilize the monitor in numerous ways, but its power can be insufficient for laptops with heavier specs such as those with rendering cards inside.

You will also find two USB 3.1 ports and a memory card reader which comes in handy if you want to transfer files from drives and gadgets. A 3.5mm analog jack is also standard on the monitor, but we think users will most likely use the ones on the motherboard or the laptop’s output for audio equipment. However, you don’t have built-in speakers with this model, but that’s negligible since dedicated sets will sound better anyway.

The BenQ SW321C boasts a 32-inch IPS panel with a 3840 x 2160 resolution, a 60Hz refresh rate, and a 5ms response time. The backlight is limited to 250 cd/m2, while the contrast ratio is listed at 1000:1 just like any IPS monitor. it has a comprehensive gamut, but it’s not advertised as an HDR monitor since it was not meant for entertainment purposes.

4K is much more suited to this size versus 27-inch variants like the BenQ PD2720U simply because the screen doesn’t look too sharp. It’s less of a chore to read and see small objects, but the extra crispness of the UHD screen and the space that comes with it is still there. It’s also great for gaming and movies, but do take note that most of the time, $2000 monitors aren’t suited or overkill for such purposes.

The BenQ SW321C renders 100% sRGB, 99% Adobe RGB, and 94% DCI-P3 perfectly so you can get rich colors and correct saturation for editing. Its default accuracy is fantastic using its default settings since the deltaE average is only at 0.89. Regular users won’t have to calibrate the monitor, but using its stock defeats the monitor’s main purpose and capabilities.

Calibrating the BenQ SW321C using a colorimeter and BenQ’s Palette Master Element app reduced the dE average to 0.31. That’s one of the best scores we’ve seen as far as color accuracy is concerned, proving BenQ’s claims regarding its fidelity. Take note that you need to use the BME app to enable hardware calibration with the 16-bit LUT, and using other programs will only apply your tweaks at the software level.

the BenQ SW321C’s backlight only reached 249 cd/m2, but that’s ok for prosumer displays since the ideal level for calibrated monitors is only at 120 cd/m2. Its contrast is even less impressive since it only managed to reach 954:1 at 50% brightness. This is where the calibration hood will come in handy since it can reduce the impact of this aspect on your images and videos.

It’s surprising how pristine the BenQ SW321C’s IPS panel is when it comes to uniformity. There are barely any leaks or clouding issues on the screen so it looks even all throughout. BenQ’s Uniformity Technology feature works great since it measures the screen’s regions and adjusts accordingly to remove variances as best it can.

The BenQ SW321C isn’t a gaming monitor, so its pixel response time isn’t the best in the 32-inch 4K monitor category. It’s prone to smudges and persistence in fast scenes, so we can only recommend it for slower-paced games like single-player titles. It’s quite expensive to lack something as basic as a fast response time, but it’s forgivable this time since this is a full-fledged prosumer monitor.

Another missing feature on the BenQ SW321C is Adaptive Sync, so you can’t rely on FreeSync or G-Sync Compatible Mode to prevent tearing. That’s ok for most cases, but users who like demanding AAA titles will miss it here since this is a 4K variant. Input lag is slightly higher at 15ms at 60Hz, but it’s still difficult to feel any sort of delay when using the monitor.

Thoughts on the BenQ SW321C

The BenQ SW321C is one of the top monitors you can get if you need outstanding image quality, especially in the color accuracy department. It’s good to once it’s out of the box since the dE average is already below 1.0, but calibrating it at a hardware level will produce even better results. It’s a well-designed monitor with functionality and durability in mind, so we’re willing to forget how dated it looks in 2021.

it is hard to list the BenQ SW321C’s flaws apart from its limited contrast since it does its job quite well. The biggest caveats we see are its price and dated looks, but it’s the perfect monitor for editors and creators beyond that. It’s a great investment, but it’s not worth it if you aren’t using it for projects and jobs to make money.