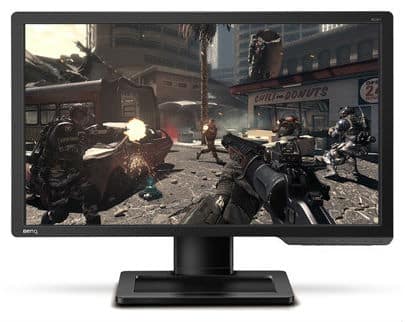 While the outer shell of the best BenQ gaming monitors hasn’t changed much, the technology running behind it has. The XL2411Z boasts an impressive range of features which are a little bit hit and miss. That being said, it’s a really good entry-level gaming monitor, if you’re willing to do some legwork to get the best out of it.

To start with, the clarity of the screen is excellent for its price, with better deep blacks than most other TN panels out there, and even on a competing level with older IPS panels. The XL2411Z comes with several factory profiles mostly targeted to FPS gaming, although these profiles tend to fall short of expectations when it comes to general activity and non-fps gaming. Fortunately, once you find a good ICC profile that fits your needs (and your refresh rate), the color quality will vastly improve.

Speaking of refresh rates, the 144 Hz of the XL2411Z gives an incredibly smooth performance, in particular with the monitor’s own blur reduction. Even so, there’s still a slight amount of banding, and while the lower refresh rates help mitigate that, they also increase the amount of flicker when blur reduction is turned on. This is where this monitor suffers if you aren’t an FPS gamer and have a diversity of games since you’ll be in a constant battle between banding or flickering, as slight as either maybe. The good news here is that the blur reduction software is compatible with AMD cards and much better than light boost.

Aside from that, BenQ brought their Low Blue Light and Black eQualizer features to the monitor. The Low Blue Light feature, while interesting, is easily trumped by other Blue Light programs you can find on the internet. As for the Black eQualizer, again, it’s mostly targeted to FPS games, so if you aren’t an FPS gamer, this feature isn’t very useful.

Unlike other monitors, BenQ doesn’t use PWM, that can sometimes cause flickering or a slight shimmer, and instead, use their overdrive system called AMA, which comes in three settings: ‘Off,’ ‘High’ and ‘Premium.’ However, the default ‘High’ setting has visible reverse ghosting, but that shouldn’t bother most users. The AMA mode also tends to work on some games and not so much on others, so having an off option is great for those instances.

On the issue of responsiveness, the XL2411Z rates high, with a response time of 4.5ms with AMA on, and an average of 8ms when it’s off. As you can imagine, this means that even the most intense gaming won’t cause any lag for this monitor.

Unfortunately, the XL2411Z doesn’t come with a Display Port. This is ostensibly because it has neither G-sync nor speakers, so having a Display Port would be pretty useless. It does come with DVI, VGA and HDMI ports, though, including a headset jack if you need it.

Similarly, the stand is rather plain but solidly built, without a cable feed hold or carry handle. It has a height adjustment of up to 130cm, left/right swivel and landscape/portrait pivot. The borders of the screen are slightly thick, with an asymmetrical shape at the bottom right corner where the monitor controls reside. Disappointingly, the monitors are very hard to remove from the stand, as you need to remove four screws to detach it and access the wall-mounting system.

On a final note, the XL2411Z is Nvidia 3D Vision ready, although you’re the only option there is V2. There’s a slight crosstalk, but that shouldn’t bother most users, and is perfectly fine for gaming.

So what’s the final verdict? Well, this is a perfect entry-level monitor targeted to FPS gaming. While it does have its downsides, most of them can be overcome with a bit of work, or overlooked entirely. For under $400 this is one of the best gaming monitors you can buy, although if you aren’t a heavy FPS gamer, you might want to take some time to consider whether this is the right screen for you.