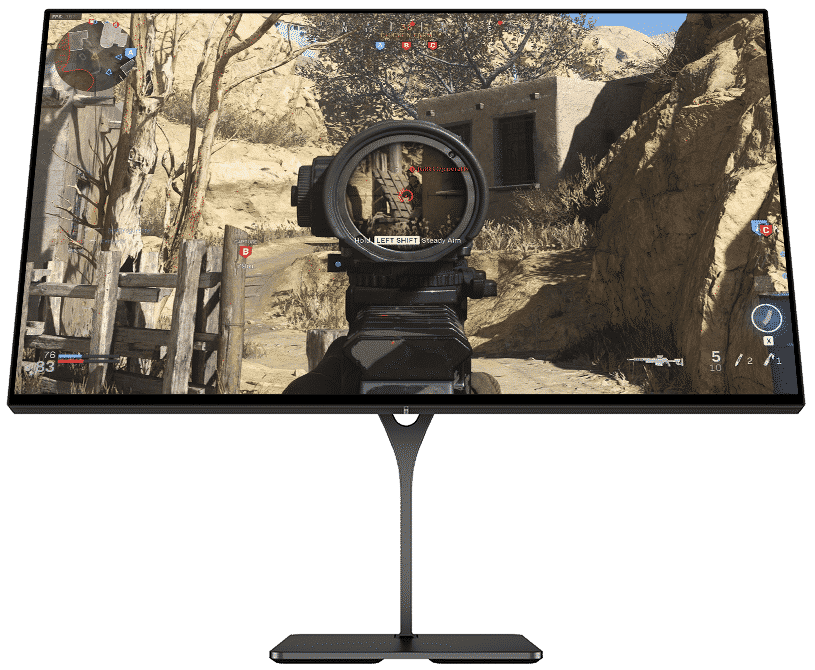 The Eve Spectrum ES07D03 monitor is a highly-anticipated 4K 144Hz monitor that targets both PC and console users who want high-refresh 4K visuals. What makes it special is it’s crowd-funded and made by an independent brand, so it offers a fresh take in the monitor market. Let’s see how the Eve Spectrum ES07D03 monitor performs and compare it against the juggernauts of modern gaming. 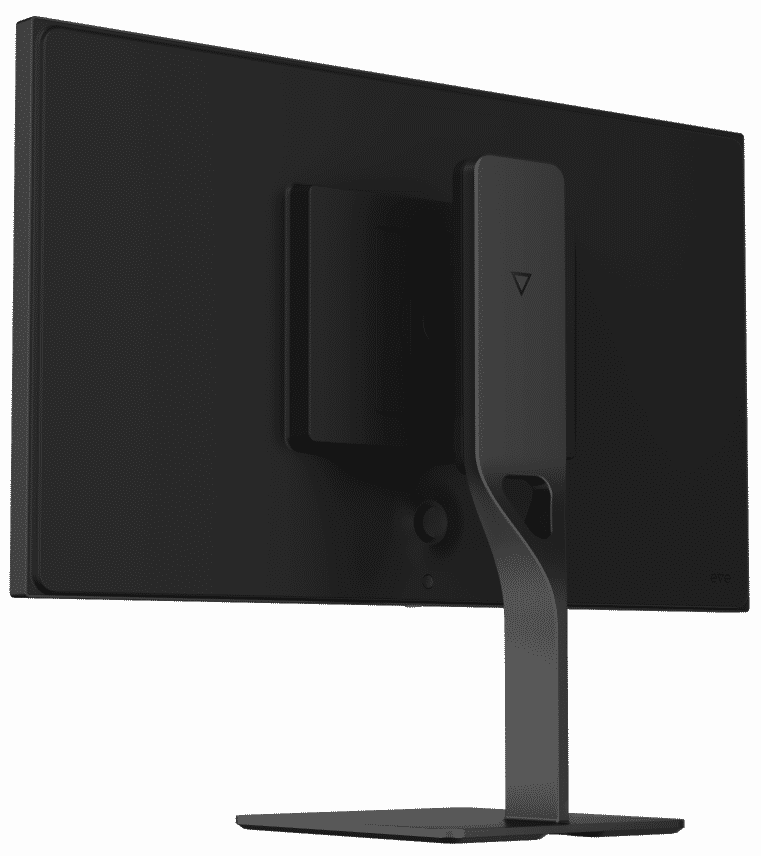 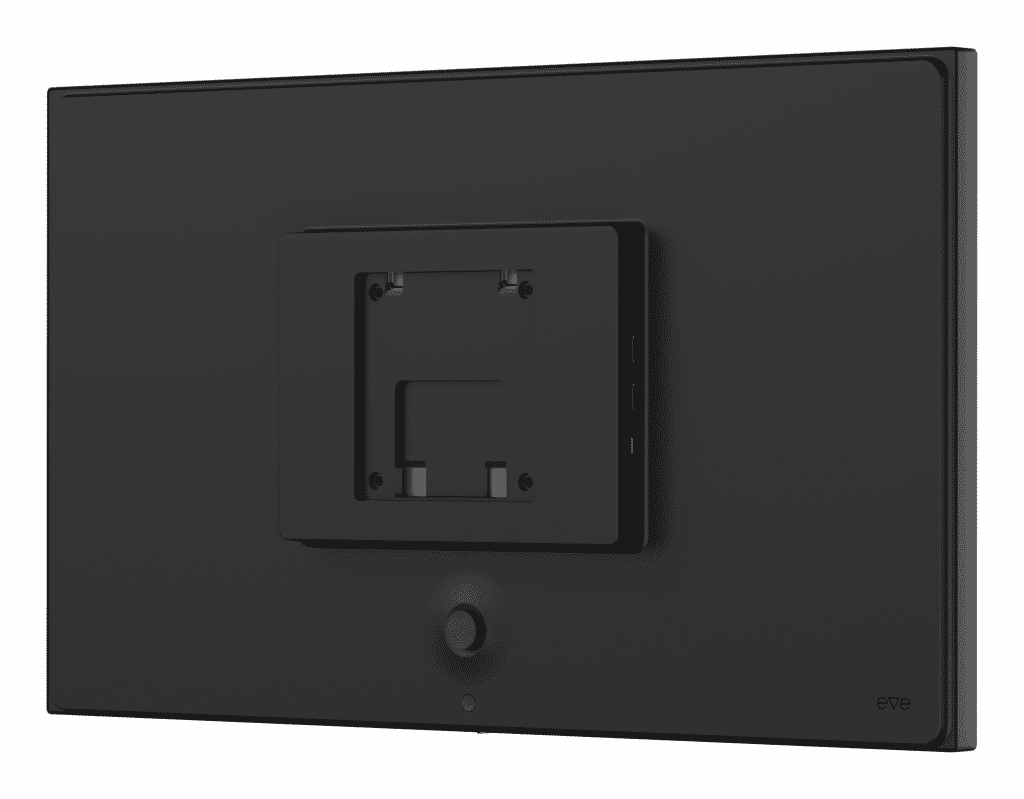 The Eve Spectrum ES07D03 simply looks mint with its minimalist design which makes it seem like it is from a premium brand like Apple. The device has a matte black aesthetic and a gunmetal stand that matches it quite well. The display has thin bezels, so you have a view that looks maximized even if inner borders are present when it’s in use.

It is sized just like any other 27-inch monitor, so you won’t have problems with placement even if your desk is narrower than the standard. The Eve Spectrum ES07D03 only needs nine inches of depth and it doesn’t weigh too heavy even if it’s with its alloy stand. The base is flat and the upright is placed towards its rear-most edge so you can use it as a pedestal for small peripherals like stream decks or even speakers.

Build quality is surprisingly great even if the Eve Spectrum ES07D03 comes from a lesser-known brand that had to rely on crowdfunding. The plastics used are refined and sturdy, plus we didn’t see any cosmetic defects on the monitor. The well-designed stand doesn’t wobble and it doesn’t look like it will allow the display to sag after a while.

Its control layout includes a centrally-positioned OSD joystick and a dedicated power button at the back of the monitor. You don’t have to lean it to reach it, but its height from the bottom edge is a bit awkward. However, it works quite well so you don’t have to go through the hassle of multiple key presses just to reach a specific setting.

The connectivity department on the Eve Spectrum ES07D03 is very strong, considering it already has all you will need. You get the standard DisplayPort 1.4 with DSC for PCs, along with two HDMI 2.1 ports which enable 4K 120Hz for the PS5 and Xbox Series X. You also get a 100-watt USB-C slot with DP Alt mode for single cable operation with modern laptops such as the MacBook Pro.

There is also another USB-C slot, but that only supports fast data transfers and up to 15 watts of charging power. The monitor also has three USB 3.1 ports for accessories, but the type-B slot needs to be connected to your PC for data upstream. The slots are laid out quite well on the bottom and side edges of the display to allow you to manage your cable as you see fit.

One downside of the Eve Spectrum ES07D03 is it doesn’t include the metal stand in the original package. You have to shell out an additional $99 for that on top of the $799 SRP, but we think that scheme is reasonable due to some valid reasons. The monitor’s price is already quite reasonable without it when compared to its closest competitors.

It’s also worth noting that Eve accomplished a survey before deciding to sell the beautifully crafted stand or include it in the package. A large chunk answered that they did not want it and the additional price it presents, so ultimately, the company excluded it from the package. This is a win for users who already have a VESA mount and would rather put that saved $99 into other upgrades.

The Eve Spectrum ES07D03 has a 3.5mm jack for audio, but it doesn’t include a pair of speakers in its chassis. That’s okay since the monitor is reasonably priced in its specialized niche, and gamers usually prefer headsets anyway. However, a decent pair would have extended its value especially if it can be used beyond basic tasks.

4K screen at this size looks extra crisp so they are great for games and movies where details count more. However, some have complained that they are too sharp for basic tasks like reading, although you somehow solve that with scaling. That’s a minor issue, but it should be considered if you are planning to use the monitor for productivity purposes.

The Eve Spectrum ES07D03 renders more than 100% sRGB and around 98% DCI-P3 for vibrant images in games and movies. It also looks like it’s factory-calibrated since the deltaE average of the default setup is only at 1.35. This is great for gamers who simply want to set it up and play without spending hours tinkering before actually using it.

Calibrating the Eve Spectrum ES07D03 reduced its dE average to 0.61 which is comparable to prosumer monitors. However, gamers will not benefit as much here since the improvements aren’t readily discernable unless you are trained for color-critical work. Colorimeters in particular are not that cheap as well, so only get one if you are going to use the monitor professionally.

The Eve Spectrum ES07D03 sustained 494 cd/m2 in SDR but it peaked at 766 cd/m2 when HDR is active. Its contrast ratio hits 1041:1 at 50% brightness, but it doesn’t expand to crazy levels since the monitor has limited dimming zones. HDR effects are better and noticeable with this model, but its not comparable to the more expensive options with complex lighting systems.

Panel uniformity for the Eve Spectrum ES07D03 sample was great since there were no noticeable light leaks on the panel. However, some haloing or clouding issues can become noticeable and dark scenes when HDR is engaged. This is a limitation of the 16-zone local dimming more than the panel, although that could change since IPS tech is also prone to these issues.

Its response time is slightly better than its HDR performance since the monitor isn’t prone to too much blurring. Setting a modest level of overdrive helps in reducing the remaining persistence further so you won’t get disturbed by dark smudges during fast-paced scenes. Setting the overdrive to its maximum will induce overshoot, but we do recommend users test this particular feature out to find what works best for them.

The Eve Spectrum ES07D03 is compatible with both FreeSync and G-Sync so you don’t need to stick to one GPU brand while you are using it. This is handy since prices and stocks aren’t particularly stable, and both companies have very good options for 4K gaming. Input lag sits at 4ms at 144Hz, so there is no need to worry about delays while gaming.

Thoughts on the Eve Spectrum ES07D03

The Eve Spectrum ES07D03 spectrum is surprisingly very good in all of its aspects such as its image quality. The company delivers its promise in colors and vibrancy, while gaming performance is beyond what most would expect. We love its simple design that puts emphasis on functionality, although the need to buy the stand separately is a bummer.

However, the Eve Spectrum ES07D03 does have its weaknesses such as limited contrast ratio and local dimming. We know those who pre-ordered agreed and voted that the stand is unnecessary, but having to pay a hundred for it isn’t a great way to do things if you are a newcomer. It’s still a great buy, and we highly recommend it if you are looking for a 4K gaming display for PC and next-gen consoles.