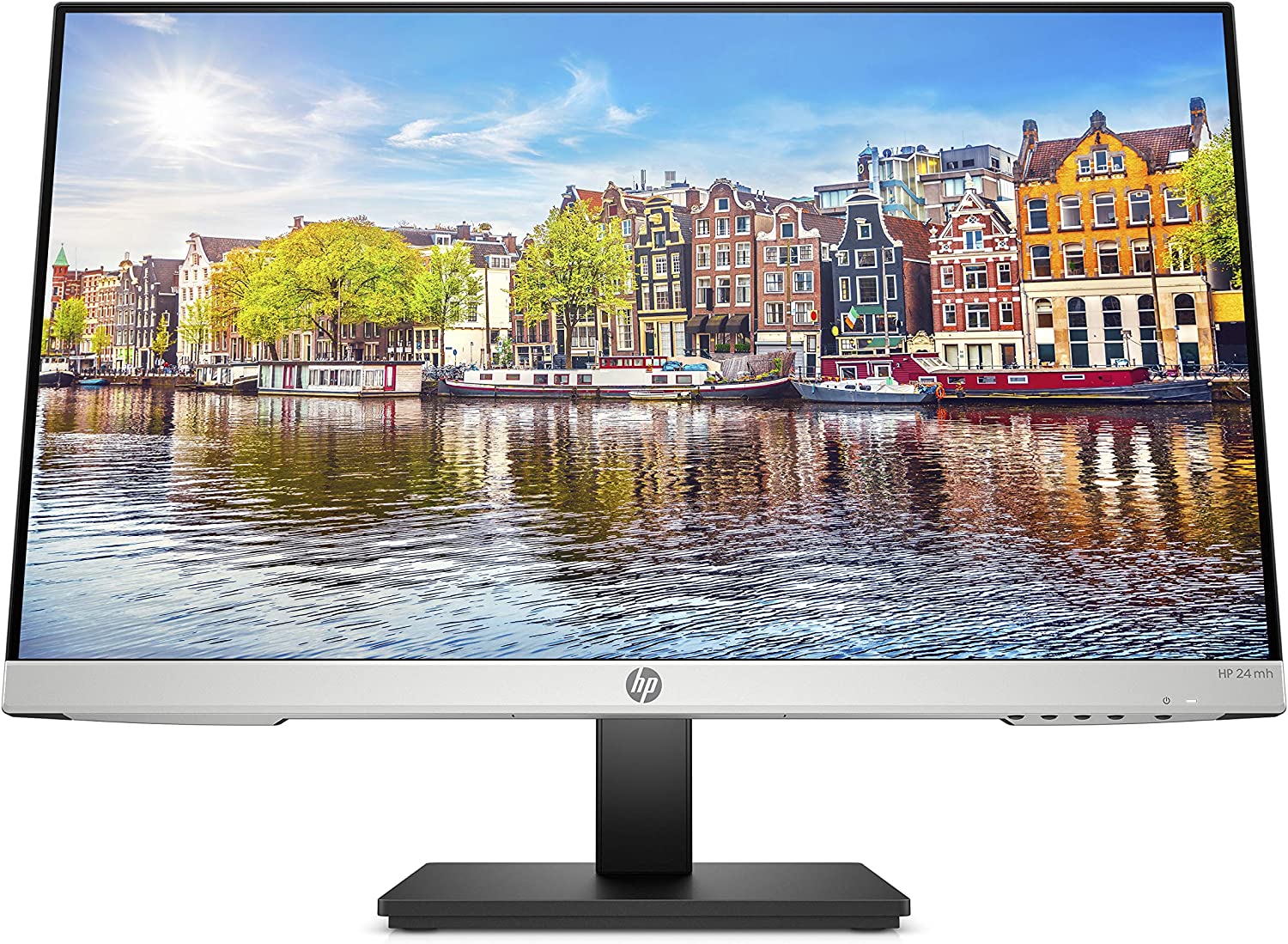 The HP 24mh is a very affordable monitor with excellent features that make it suitable as your daily driver. It doesn’t offer high-end features, but it does have a vibrant IPS screen and almost everything you need for a smooth day at work. Let’s find out if the HP 24mh is the must-buy monitor for school and work from home users in 2021. 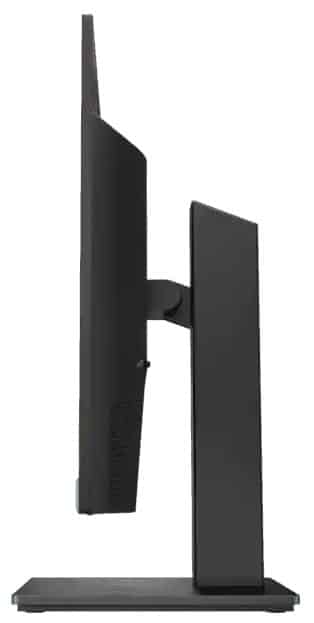 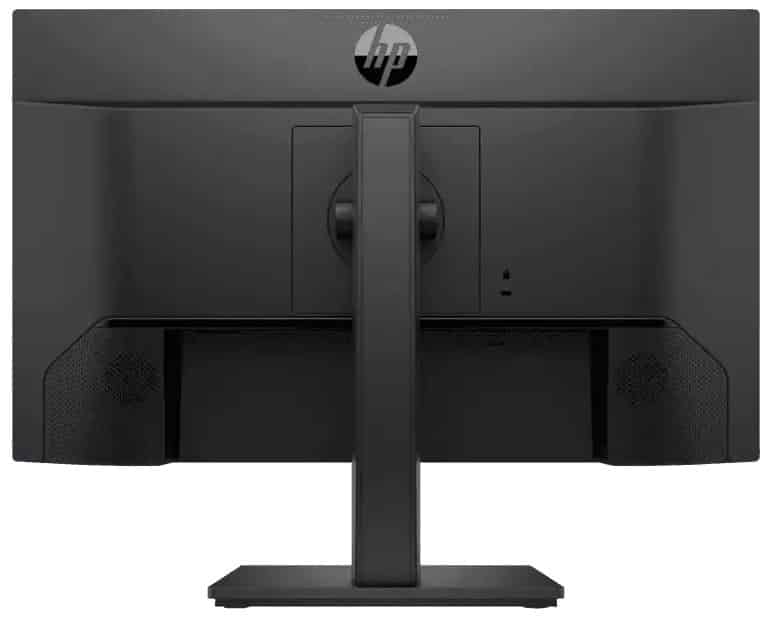 The HP 24mh has a modern and simple design that doesn’t make it stand out but allows it to avoid going out of style after a few years. The monitor has a matte black chassis with a silver strip that gives it an elegant appeal. What we like about it is it’s bezel-free on three sides so the screen sometimes appears bigger than it really is.

The HP 24mh is relatively sleek so it should fit into tight desk setups or study corners easily. It only needs eight inches of depth and its base is square and flat so it will be manageable even if you have several peripherals on board. It weighs close to ten pounds, so it won’t be too difficult to move around or bring with you for group study or work sessions. 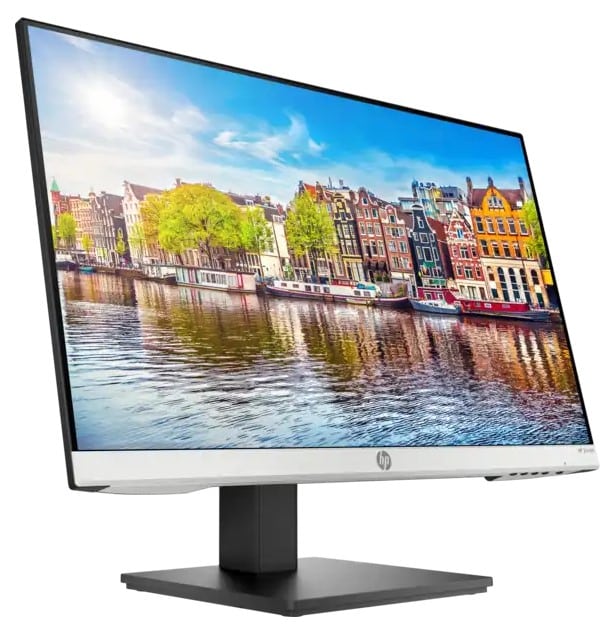 Build quality for the HP 24mh is great for a budget monitor since it feels durable and reliable once assembled. The plastics feel sturdy and thick enough to prevent flexing, and there are no cosmetic defects or uneven seams and gaps. The stand doesn’t wobble uncontrollably, so you won’t get dizzy even if you are a heavy typist.

What’s missing from the HP 24mh in the convenience aspect is an OSD joystick since it still uses buttons. The layout is just under the bottom bezel and the keys are decently sized, but it still takes longer to navigate the submenus with them. It’s forgivable for budget monitors, but many brands like Samsung are already using joysticks on their entry-level offerings.

The stand included with the HP 24mh offers sufficient flexibility unlike many budget offerings in the same price range. Its mechanism offers tilt, pivot, and height adjustments, so you can always get a comfortable view. You can use VESA mounts as an alternative, but it’s only necessary for multi-screen setups or if you absolutely need to save space.

The HP 24mh doesn’t have valuable extras such as USB ports, but it’s one of the few affordable options that include DisplayPort 1.2. You also get a slot each for HDMI 1.4 and VGA which will allow secondary devices like a gaming console to connect to it. There is also a 3.5mm jack for headphones, but we know many prefer using the slots on the motherboard for less hassle.

A pair of 2-watt speakers are also included with the HP 24mh for your simple audio needs. The built-ins don’t sound powerful and they distort easily, but its nice to have a backup set for conference calls or even background music while grinding. Many users probably won’t use it, but we’re impressed how HP squeezed as much as it can into an affordable option.

The HP 24mh provides a 24-inch IPS panel with a 1920 x 1080 resolution, a 75Hz refresh rate, and a 5ms response time. The backlight is limited to 250 cd/m2 while the contrast ratio is listed at 1000:1 like most IPS panels. This monitor doesn’t have entertainment-oriented features like HDR, but it promises great color quality at a low price.

24-inch 1080p monitors are old, but they are still popular in almost every aspect that uses computers. Many businesses and schools still use them, and it’s still the universal format for E-Sports competitions around the world. It’s not as sharp and it doesn’t have the extra space of 1440p and 4K, but legibility is great, and it’s relatively easy to run for most systems.

The HP 24mh covers almost 100% of the sRGB gamut so it looks vibrant and rich for daily use and casual gaming. The default accuracy is superb since the deltaE average hovered around 1.43 which is fantastic for a budget model. Most users won’t need to calibrate this display aside from adjusting minor settings such as the brightness.

Calibrating the HP 24mh improved its deltaE average to 1.03 which is even better if you edit photos or create content. However, colorimeters aren’t cheap, so it’s only advisable if you already have the gadget in tow.

The HP 24mh was only able to hit 229 cd/m2, so some users may find it necessary to crank up the setting in well-lit rooms. Its contrast ratio on the other hand hit an impressive 1268:1 at 100% brightness, enabling it to do better when it comes to black luminance. It’s still not comparable to VA monitors, but it’s better than a sea of IPS monitors we’ve checked out.

Panel uniformity for the HP 24mh is decent since there are no major backlight leaks on the monitor’s edges. Black uniformity showed some clouding issues, but it’s only noticeable in all-black or extra dark images. Thankfully this kind of flaw varies between units, so there are better ones out there.

Responsiveness isn’t a particular strength of the HP 24mh even if it has an extended 75Hz refresh rate. It’s prone to some blurring in fast or contrasting transitions, so it’s not suitable for competitive gaming. That’s forgivable anyway since it’s not for gaming and you only need to add a few bucks nowadays to get a 144Hz variant like the HP X24ih.

The HP 24mh doesn’t support FreeSync so naturally, G-Sync Compatible mode is out of the question. Gaming features like these aren’t essential for productivity monitors, but some alternatives offer it anyway since VRR is more or less free. Input lag is at 10ms, so it’s still responsive enough for casual gaming on PC and consoles.

Thoughts on the HP 24mh

The HP 24mh is a great choice for work from home users who want an affordable monitor with a great IPS screen and better functionality. The display doesn’t need calibrating, although it’s still limited by the bounds of a regular IPS display. We like how HP added plenty of extras such as speakers and a DP slot without raising the price too much.

It’s hard to find faults with the HP 24mh since there aren’t a lot of monitors that can compete with it at the same price. going cheaper means you have to sacrifice a few features and performance numbers, but wanting something faster will cost more. however, it’s a great buy this year since it’s quite useful for work from home setups and even casual gaming.

Search
NEW
POPULAR
You are here: Home / Reviews / HP 24mh Review – Affordable Ergonomic Monitor for Work from Home Use – Recommended
This website uses cookies to improve your experience. We'll assume you're ok with this, but you can opt-out if you wish.Accept Read More
Privacy & Cookies Policy
Necessary Always Enabled
Share This