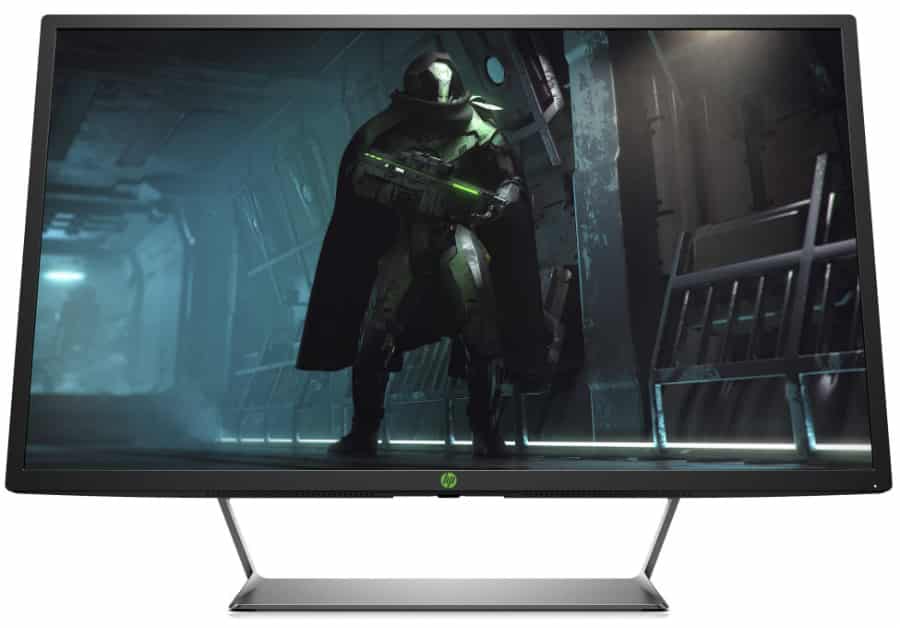 Updated June 2019: The HP Gaming 32 is basically an upgraded Omen 32 that now includes HD600 VESA compatibility that makes it perfect for console gaming on the Xbox One X. What sets this model apart from the similar models in HP’s lineup is the inclusion of an 8-zone edge lit array along with the ability to pulse the backlight to 600cd/m2 as needed. Let’s take a peek at how the HP Gaming 32 stacks up to the slew of available and upcoming gaming monitors. 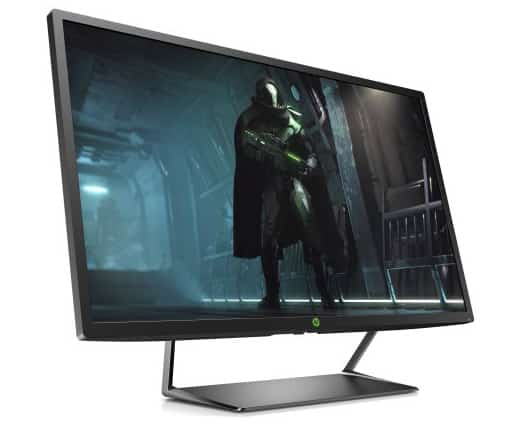 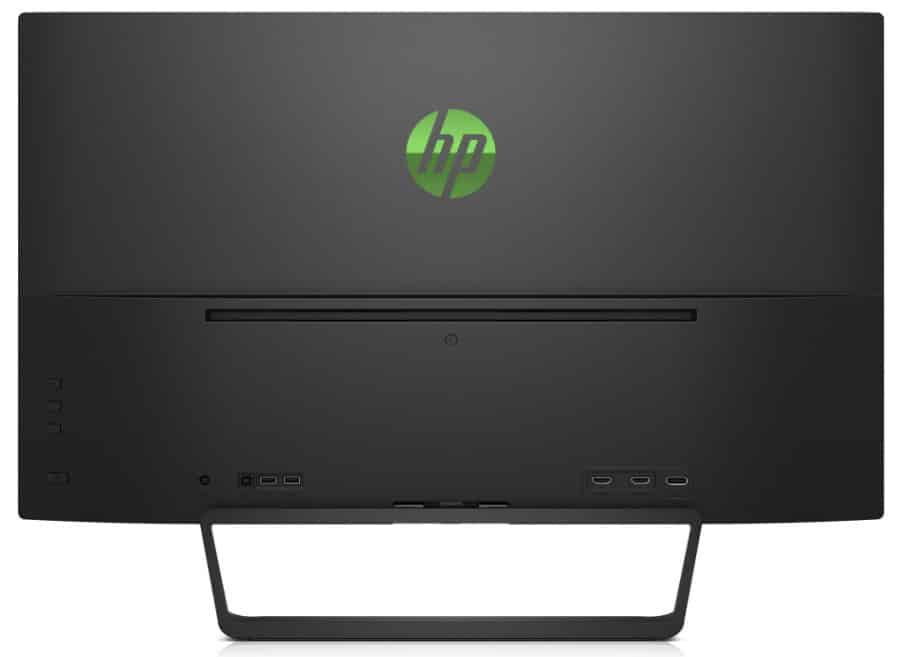 At a glance, there is basically no difference between the HP Gaming 32 and similar monitors such as the well-loved Omen 32 and the office-oriented Pavilion 32. The chassis comes in matte black with green logos this time around, which is an aesthetic hint that this gaming monitor is suitable for the Xbox One X. The display area isn’t bezel-free, but the thin borders are within reasonable limits and unnoticeable when gaming. 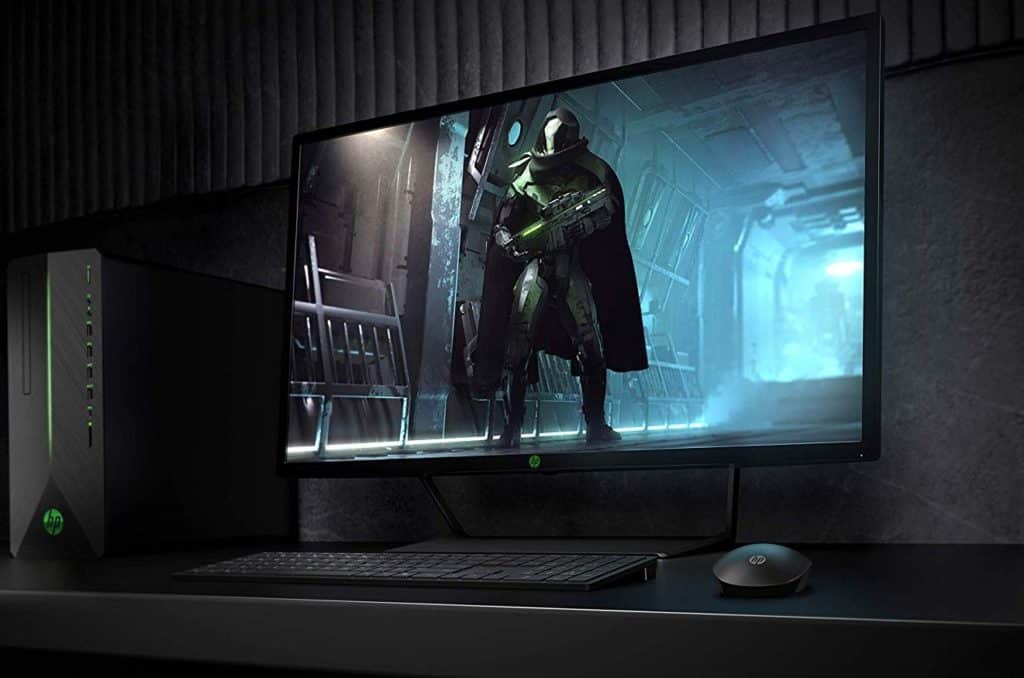 Build quality for the HP Gaming 32 is excellent despite its modest proportions which usually equate to fragile panels and hinges. The monitor doesn’t wobble or creak when you try to adjust it, plus the seams are all intact. The texture of the matte black plastic is nice and cool to the touch while also helping to avoid smudges and fingerprints which would make the device look dirty.

The HP Gaming 32 also uses the rectangular stand that provides a lot of stability while adding a nice minimalist touch to the looks of the product. There are no cable management options, but the flatness of the base makes it great for placing your mobile phones or small knickknacks such as keys and thumb drives. The one downside of this design is the lack of flexibility since this mechanism can only provide 25 degrees of tilt.

It’s also a deal breaker that you need to buy a separate mounting assembly for the HP Gaming 32 if you want to user aftermarket options. It’s an additional 20 or 30 dollar purchase, but that breaks the value of the monitor considering its low price.

Connectivity is rather limited when compared to what other products offer, but the inputs should suffice for every use. You get two HDMI slots and a DisplayPort connector for video inputs along with two USB 3.0 receptacles for accessories. There is a headphone jack for audio passthrough, but there are no built-in speakers for basic audio appreciation.

The HP Gaming 32 boasts a 32-inch VA panel with a 2560 x 1440 resolution, 75Hz refresh rate and 4ms response time. The included backlight is rated at 300cd/m2, but HP says that the unit can pulse all the way up to 600cd/m2 when HDR content is in play. There are also eight LED zones with local dimming capabilities to help increase the monitor’s dynamic range.

The HP Gaming 32 is an ideal display for both PC and Xbox due to its size and resolution. However, sitting up close will reveal the slightly looser pixel pitch which is comparable to 24-inch 1080p variants. The latter isn’t totally bad, but it will induce a bit of edge softening in some titles.

The HP Gaming 32 covers 94% of the sRGB gamut which is a bit low for VA screens with HDR compatibility modes. What’s great about it is its average accuracy of Delta E 2.05, which means you don’t have to calibrate the screen to get realistic colors. Color temperature is slightly too warm for our tastes, so turning down some of the red in the OSD is a must.

It’s also surprising that HP would advertise this model as a DisplayHDR600 compliant display at this price range. However, the very capable backlight on the HP Gaming 32 peaks at 440 cd/m2 for SDR and a whopping 650 cd/m2 when HDR mode is active. Contrast tops out at 3200:1, but it pumps up to 4400:1 when HDR signals call for it.

Gamma is slightly off at 2.17, but that does little to affect the excellent black luminance and grayscale performance of the HP Gaming 32. Some crushing happens in a few instances but is nothing most would worry about for a high-contrast screen.

Uniformity is slightly skewed due to the imbalances in the backlight which shoots up from 13% to around 17% on the top corner. The middle of the screen also looks warmer than the rest, but all quadrants stayed within DeltaE 3.0 of the D65 standard. Take note that these results will vary between every unit since no two are made equal.

The main waeakness of the HP Gaming 32 is its VA panel’s inherrent limitations in motion handling. This model has a slightly higher pixel response time than the Omen 32 and other VA gaming monitors we’ve tested. We recommend using this model at a distance instead of on a desktop to help mask the streaks and ghosting, especially in fast-paced titles.

The HP Gaming 32 is a FreeSync gaming monitor, but it is not certified to work with G-Sync compatiblity. Input lag is also higher than you’d like, peaking at 30ms when HDR mode is active.

Thoughts on the HP Gaming 32

The HP Gaming 32 starts out as a promising HDR gaming monitor at a considerably low cost. The panel and the backlight have great qualities, but some gaming characteristics such as motion handling need to be addressed. There’s also the very limited physical design which helped cut off a chunk from the pricing, but not without a compromise.

We can only recommend the HP Gaming 32 if you are into casual gaming with single-player titles or movies. Streaming in HDR is also a fantastic outlet for the monitor, but its 1440p resolution isn’t supported by many services. The HP Gaming 32 is offered at a fantastic price point, but be ready to deal with its quirks.