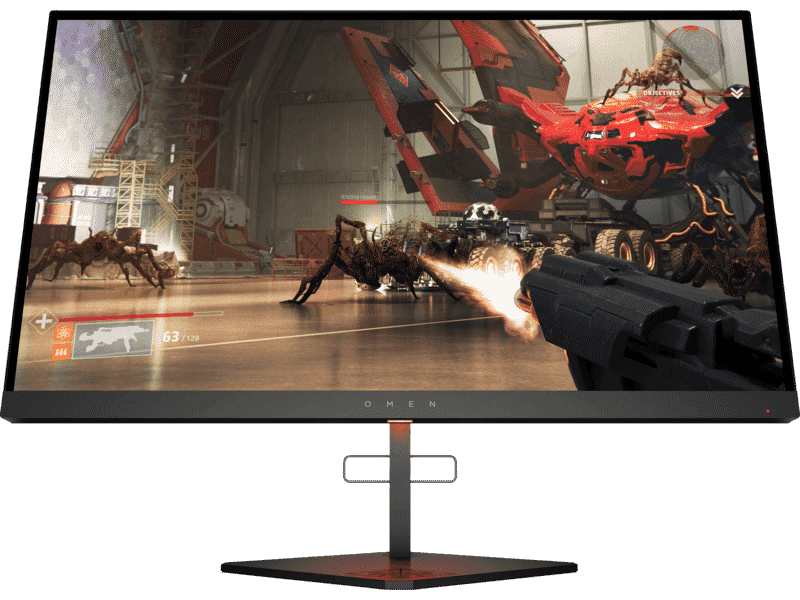 The HP Omen X 25F offers a competitive-grade 1080p 240 Hz screen that focuses on gaming performance with a decent bit of imaging quality. The well-designed device isn’t as popular as those from gamer-centric brands such as Asus, but what it includes for the premium price is attractive. Let’s find out if the HP Omen X 25F can outpace its rivals while bringing the unique Omen flavor to your custom build PC. 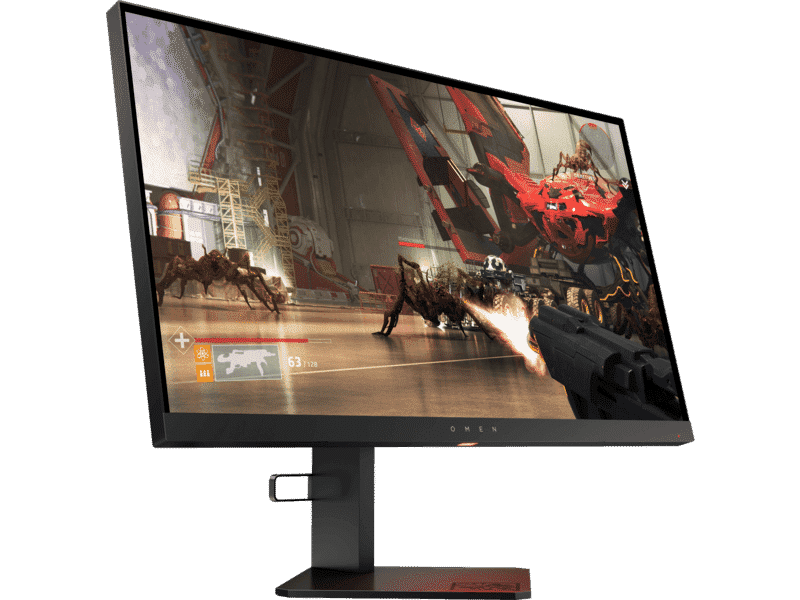 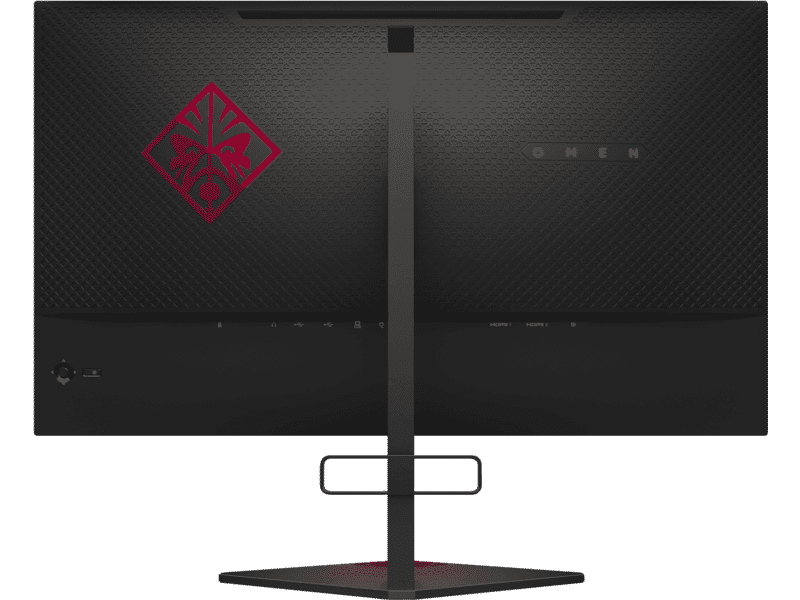 The HP Omen X 25F sports the distinct aesthetic found in Omen products composed of texturized matte black surfaces and red accents. This monitor is one of the most minimalist-looking in the category, making it seem like a business model more than one for our favorite hobby. However, the display isn’t bezel-free, but the very thin plastic borders are reasonable and mostly unnoticeable during play.

But if you place the HP Omen X 25F next to another variant from the brand, you will know that it belongs to a cut above the rest. It’s mostly made of plastic, but the bright red Omen logo at the back and the premium feel of the chassis itself says a lot. Build quality is fantastic compared to models like the HP 27F, and there is no sign of wobbling or creaking from the device.

We also like that there are no buttons and their usual labels visible on the front, save for the sleek Omen logo at the bottom bezel. The HP Omen X 25F uses a joystick at the rear near the right-hand side corner along with a dedicated power button that is easy to access. The OSD itself is well equipped with most of the settings you will need, but as always, it takes some mastery to speedily browse through the sub-menus.

There is also an ambient LED below the Omen logo for RGB lighting effects on the HP Omen X25F. We like that it adds a gentle glow to your desktop, but it can sometimes get distracting if your other peripherals and your system itself isn’t lit.

The included stand boosts the minimalist appeal of the HP Omen X 25F with its unique form. The diamond base takes up almost 11 inches of depth, but it’s flat and it provides a nice spot for your smaller gadgets such as a phone or a mini soundbar. HP also cared to add a headset stand at the top of the upright, and a hoop for cable management so you can enjoy a neat setup.

However, one downside of the stand is it only offers tilt and height adjustments, which is rather limited for a 1080p gaming monitor at this price range. You can opt for VESA mounting, but there are no bolt holes on the chassis. Thankfully, the package already includes the necessary adapter which is an additional hassle, but at least you don’t have to buy it separately.

The HP Omen X 25F offers a DisplayPort 1.2 and dual HDMI 2.0 slots for video inputs. The device leaves out older standards such as DVI, but those aren’t necessary since a lot of modern GPUs rely on DP and HDMI. There are three USB 3.0 slots on the monitor for accessories, but all of them are located at the rear so accessing them regularly could be troublesome.

One thing the HP Omen X 25F is missing is a pair of built-in speakers which should have been there if you consider its price point. However, these tinny-sounding add-ons are rarely missed for gaming setups which usually already include a gaming headset or a separate set.

The HP Omen X 25F sports a 25-inch TN panel with a 1920 x 1080 resolution, 240 Hz refresh rate, and 1ms response time. The typical contrast ratio rests at 1000:1, while the backlight sits higher than the usual at 400 cd/m2. These are normal characteristics for a gaming display at this price, but we like that the more powerful backlight is able to produce a wider adjustment range.

Competitive gaming is still mostly played the format the HP Omen X25F comes with, so it’s still a very viable purchase in a market saturated with high-resolution options. This size is perfect for the resolution since it keeps pixelization and image degradation at bay. The monitor is comfortable to use even for everyday tasks, especially since you don’t need to use scaling to make everything legible.

The HP Omen X 25F doesn’t excel in color fidelity since its sRGB gamut coverage is limited to 94% with a default accuracy of DeltaE 3.5. Color temperature is also biased towards the warmer side, so white backgrounds like browsers or document apps will look slightly yellowish. However, it’s easy to correct these flaws with a few tweaks, which will then improve color accuracy to DE 1.2, plus push gamma and color temp closer to the ideal points.

On the other hand, what we liked about the HP Omen X 25F is its backlight which reached up to 410 cd/m2 along with a peak contrast of 1150:1. The screen doesn’t look as deep as a VA variant, but blacks are noticeably better on this display compared to other highly recommended models like the ViewSonic XG2530. You also have a lot of room for backlight adjustment, although we recommend staying at around 20% to help with the other imaging aspects.

Panel uniformity for the HP Omen X 25F is excellent since the backlight variance maxed out at 6% on all sectors. There is no noticeable color shift on the screen’s sections, but there is a bit of clouding which you will only notice in all-black images. You also don’t have to deal with backlight bleeding with this monitor, making it more suitable if you want to focus on your game.

Motion handling is one of the best characteristics of the HP Omen X2 5F thanks to its refresh rate and class-leading pixel response time. You won’t need to use its overdrive setting in most cases since blurs and trailing are too minor to notice. For the extra sensitive, you raise the response time levels further, but we recommend limiting it to the third option since the final level will induce overshoot.

The HP Omen X 25F is a FreeSync gaming monitor, but it can also run G-Sync compatibility for Nvidia GPU users. Don’t confuse this model with the HP Omen X 25, since that will have G-Sync embedded into its functionalities. Input lag sits below 4ms, making this one of the fastest 240Hz competitive gaming monitors available to date.

The HP Omen X 25F is a top pick if you want one of the fastest gaming monitors in the market. Its responsiveness and latency can only be matched by equally premium models which are usually bought for E-Sports or competitive setups. Image fidelity doesn’t look too good out of the box, but it’s easy to correct some of the noticeable flaws via the OSD.

Our main complaints about the HP Omen X 25F include its pricing and limited physical features. HP could have improved the design with better ergonomics and functionality, especially since this model launched at a price higher than what other 240 Hz FreeSync models cost now. However, this model is part of the few, cream of the crop offerings out there that will satisfy you if the fastest is what you are after.