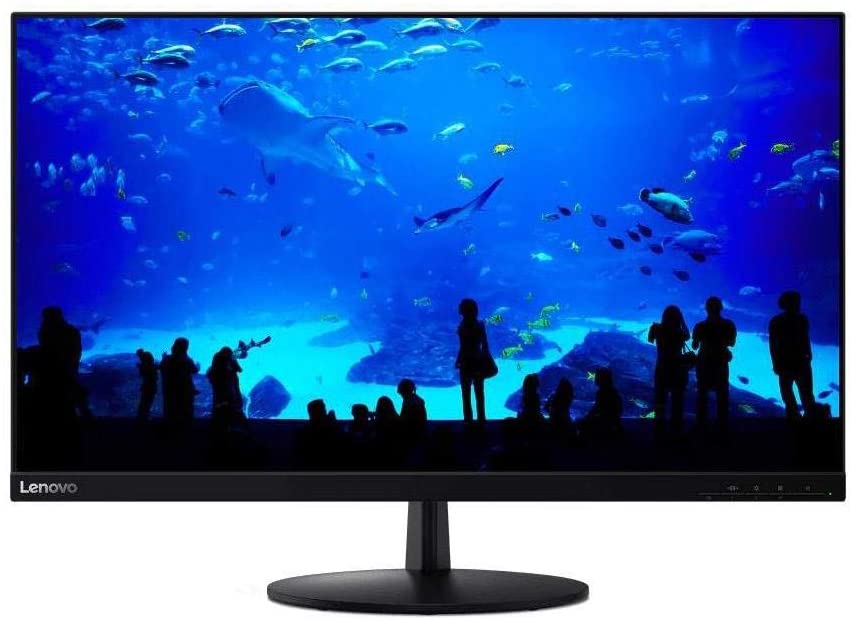 The Lenovo L28u-30 is a reasonably-priced monitor that offers a large and crisp resolution for daily tasks such as productivity or gaming. It doesn’t offer a lot of neat tricks, but you won’t get 4K screens like this for the price back then. The Lenovo L28u-30 is one of the cheapest UHD monitors around, but let’s see what kind of quirks and strengths it offers. 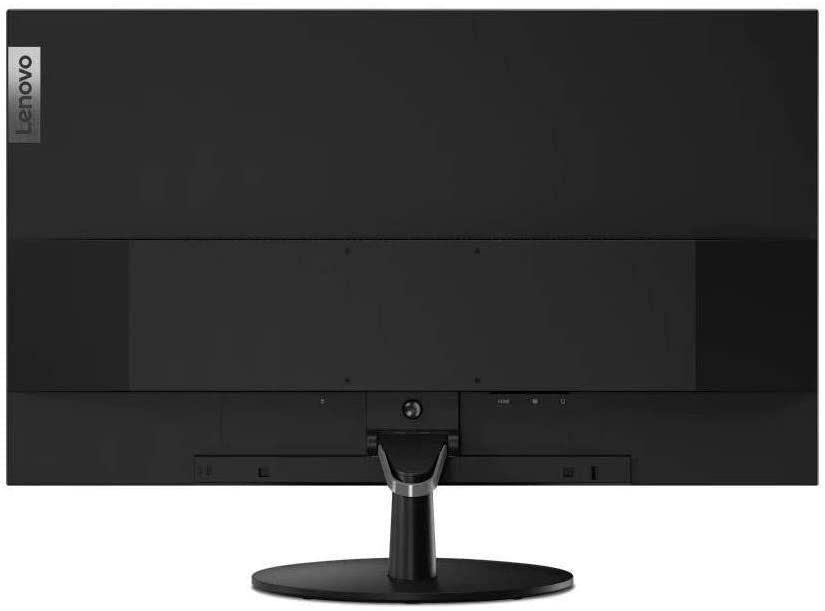 The Lenovo L28u-30 is a budget monitor, so it doesn’t have a lot of decorative extras aside from its sleek and slim form. The monitor has a matte black finish and grey-colored Lenovo brand and cable passthrough as its only accents. The display is bezel-free on three sides but you will still see inner borders while it’s in use.

You might also find a ThinkVision variant named the S28u-10 which looks the same and lists similar specifications. It’s the same monitor, but it’s branded for the ThinkVision business line up instead. The only difference is that its cable passthrough is red and it has a ThinkVision logo at the back instead of Lenovo. 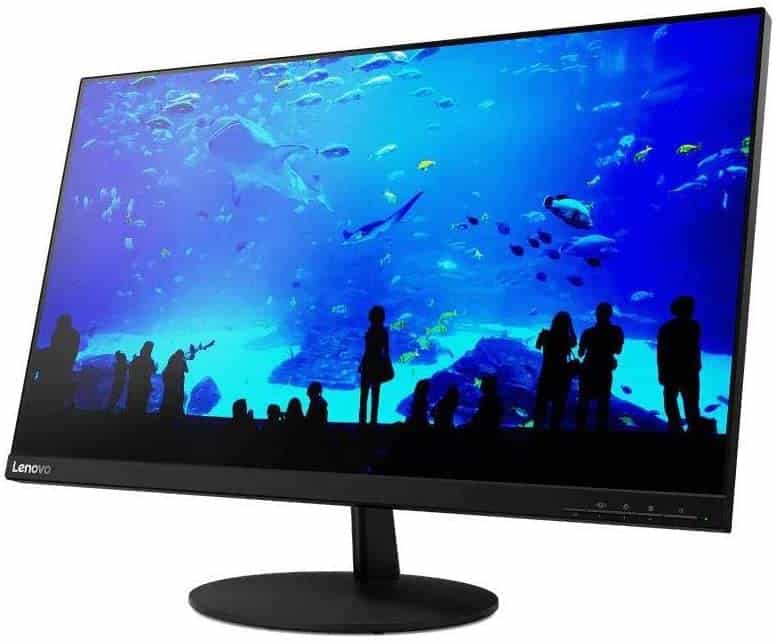 The brand has a knack for making sleek and sophisticated products, and the Lenovo L28u-30 isn’t an exception even if it’s a budget model. The only considerably protruding part of the monitor from its sleek chassis is its circular base, but it otherwise doesn’t consume a lot of space. The monitor is lightweight for a 28-inch model so it’s easily mountable with just about any VESA arm out there.

The Lenovo L28u-30 has decent build quality with reasonably durable plastic panels and a limited, but stable stand. The monitor only wobbles if you touch it, but it is can hold the angle you’ve set almost permanently. Assembly is quite easy and there are no cosmetic defects on any of the monitor’s corners or surfaces.

The Lenovo L28u-30 uses four buttons for the OSD which are located at the bottom bezel facing the user. It is great that you don’t have to fumble for them in the dark, but they are still prone to wrong or unintentional inputs and presses. We always prefer OSD joysticks, but the lack of it is forgivable this time around since this monitor is quite affordable.

The stand included with the Lenovo L28u-30 doesn’t offer a lot when it comes to features since it is limited to tilt adjustments. It does, however, have a quick-detach button which lets you remove or attach it easily. You can also opt for VESA mounts if you want to save space or more flexibility, but the stand should be good enough for most purposes.

The Lenovo L28u-30 only offers the bare essentials when it comes to connectivity so there are no useful extras like USB ports. The panel at the rear only includes a slot each for DisplayPort 1.2 and HDMI 2.0, along with a 3.5mm jack for audio passthrough. Most would expect more from a brand known for business products, but again, this is forgivable since this model is so cheap.

You don’t get speakers with the Lenovo L28u-30, but that’s acceptable since the current industry standard isn’t obligated to include great-sounding pairs anyway. It would be useful for home and office tasks such as video conferencing, but we think most users won’t miss it since they probably already have headsets or desktop speakers anyway.

The Lenovo L28u-30 sports a 28-inch IPS panel with a 3840 x 2160 4K resolution, a 60Hz refresh rate, and a 4ms response time. The backlight is rated at 350 cd/m2, while the contrast ratio is at a typical 1000:1. The monitor is intended for mixed-use rather than specialized purposes, so it doesn’t offer characteristics like HDR compatibility or other gaming features.

4K at 28 inches looks incredibly crisp so the Lenovo L28u-30 is great for games and movies. However, some users might struggle with very small texts, so Windows scaling could become necessary in some use cases. 4K fits better in 32-inch models, but we know you’ll love the extra desktop space and the sharpness of this monitor.

The Lenovo L28u-30 provides punch colors and shades thanks to its 120% sRGB and around 80% DCI-P3 coverage. Default accuracy needs improvement since the deltaE average reached 3.65, but it’s acceptable for daily use even if some colors look off. Users can get away with a few tweaks, but most will be fine with the default setting minus the high brightness level of the screen.

Calibrating the Lenovo L28u-30 with a colorimeter can yield substantially better accuracy and color fidelity with a much lower dE average of 1.22. It’s necessary for color-critical work such as editing, but you have to pay for the colorimeter which costs almost as much as the monitor itself. A more accurate model like the Dell U2720Q can be had for the total amount of the two gadgets if you need better consistency for professional applications.

The Lenovo L28u-30’s backlight only managed 320 cd/m2 at maximum while its contrast ratio reached 1085:1 at 60% brightness. These results are acceptable for a budget monitor, but that doesn’t mean the screen is capable of deep blacks. Black shades or dark scenes can still look washed out when viewed with the lights out, but that’s normal for most IPS panels.

Panel uniformity for the Lenovo L28u-30 isn’t great since there are backlight leaks at the edges of the screen which result in clouding during dark scenes. They aren’t as noticeable when full-color images are on display, but they can be annoying if you play games or watch movies in low-light environments. Thankfully, this issue varies between every unit due to the nature of the panel and some manufacturing tolerances.

We don’t recommend the Lenovo L28u-30 for fast-paced games since its pixel response time isn’t fast enough to avoid blurring and persistence. The monitor has an overdrive feature which can alleviate it, but only its maximum setting at the cost of a little overshoot can clean up the smudges and persistence. This is a minor issue since the monitor wasn’t meant for more than casual gaming, so it’s better to spend more on a gaming variant if you require faster pixel transitions.

The Lenovo L28u-30 is compatible with FreeSync while G-Sync was tested to be functional without issues such as flickering. There are a lot of 4K monitors that had issues in this regard, but it looks like VRR compatibility is becoming better every generation. Input lag sits at 10ms, so there is no need to worry about de-synced instances while gaming.

Thoughts on the Lenovo L28u-30

The Lenovo L28u-30 isn’t perfect, but it presents excellent value at its $250 to $300 price point. The price belonged to TN-based 4K monitors like the Acer KG281K not too long ago, so we’re glad that the benefits of IPS have become more affordable for the masses. The screen provides eye-popping colors and sharpness, although it needs a bit of tweaking to get the most out of it.

Some of the limitations of the Lenovo L28u-30 like its tilt-only stand are forgivable, and there aren’t really any deal-breaking flaws if you consider how much it costs. It’s a great pick if you want an economical 4K option, but don’t expect high-end qualities for gaming or editing since they usually dictate higher pricing.