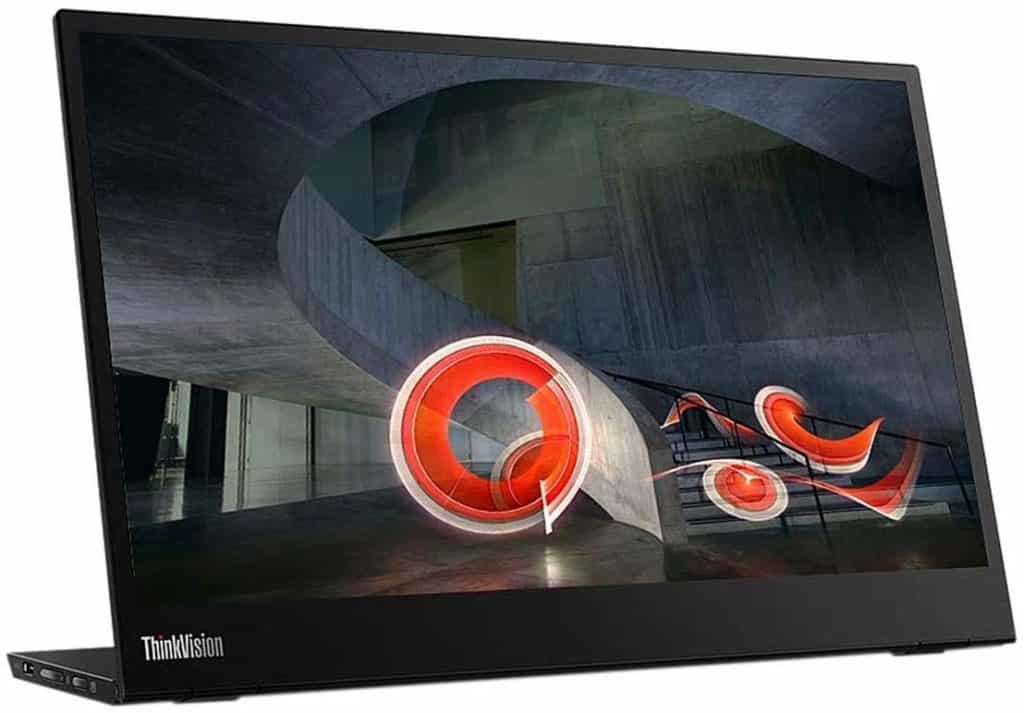 The Lenovo ThinkVision M14 offers a vibrant IPS display that’s embedded into a svelte package that is designed to slip into your laptop bag or briefcase. This model is great for professionals who use USB-C laptops like the MacBook Pro which need to extend their digital workspace while working on the go. The Lenovo ThinkVision M14 competes against the already popular Asus MB16AC, but does it have advantages that will make it the better buy? 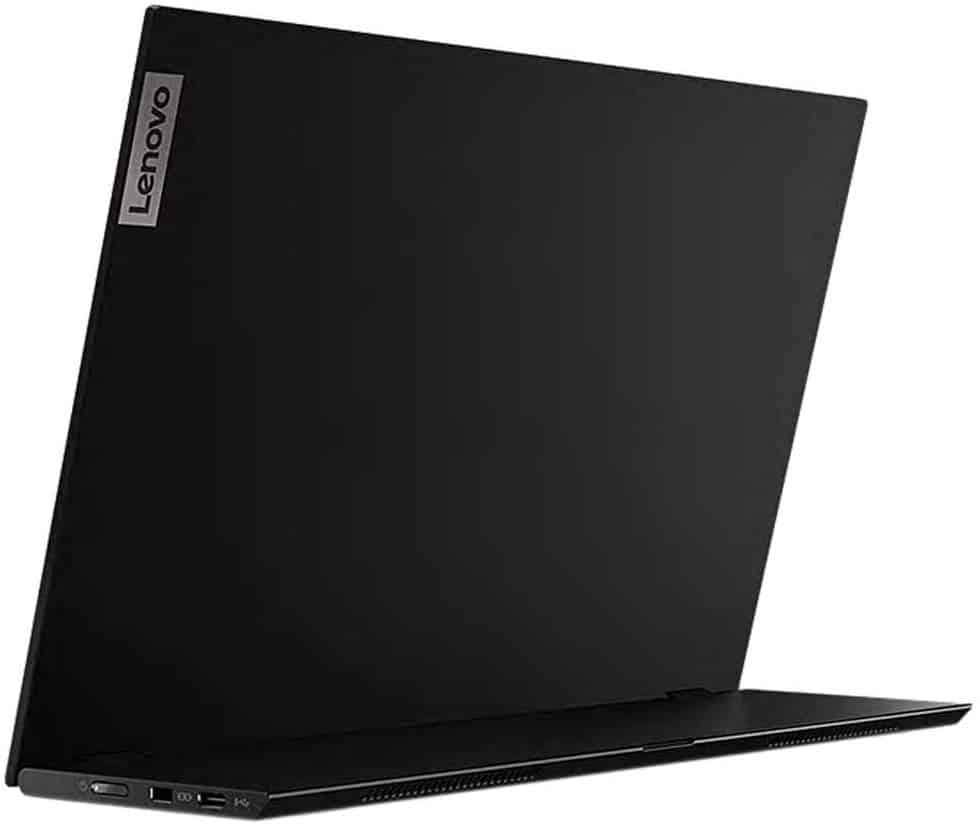 The Lenovo ThinkVision M14 shares the same design concept with the brand’s minimalist laptops which are designed to last. The monitor has a sleek, matte black chassis that is easy scratch-proof and easy to protect against smudges. The display itself isn’t bezel-free, but the borders are quite thin and they sit flush, so they won’t be distracting. 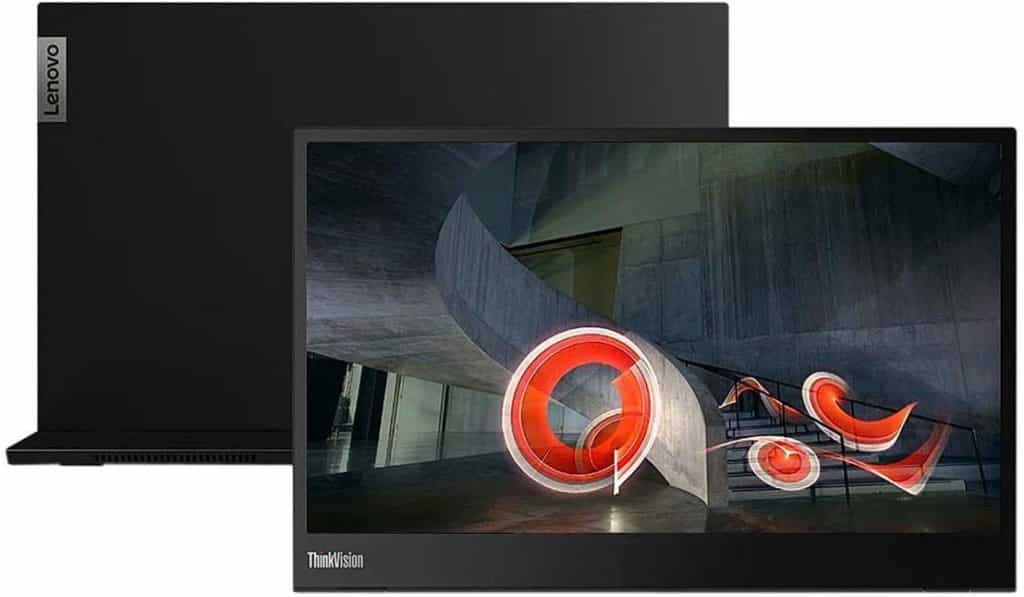 One physical disadvantage we see on the Lenovo ThinkVision M14 is its made up of plastic which feels cheaper compared to the metals used on its competitors. However, build quality thankfully doesn’t suffer since there is no unwanted flex and uneven seams on the slim device. The product feels very light at 1.3 pounds, but that doesn’t mean its too fragile to be lugged around.

The Lenovo ThinkVision M14 is smaller than its Asus counterpart, but its slightly in total since it has a built-in stand. That’s right, you don’t have to deal with flimsy portfolio-type covers to prop this monitor up on a desk. The mechanism allows users to have anywhere from -5 degrees to 90 degrees of tilt, so setting up the display anywhere is easy as peas.

There is also a kickstand on the Lenovo ThinkVision M14, so setting it up in portrait mode without having to worry about it falling is doable. You also get a foot that flips out from under the bottom bezel to raise the height of the display which helps it level against your laptop’s screen.

You don’t get OSD buttons or joysticks with the Lenovo ThinkVision M14 since its OSD is limited to a few settings. The brightness levels are directly accessible via the side buttons, along with a dedicated one for blue light reduction. You have to make do with the default calibration, and that’s a big no-no for photo and video editors.

The main attraction for the Lenovo ThinkVision M14 is its USB-C connectivity which makes it perfect for laptops like the MacBook Pro. The USB-C slots consumer power from your laptop while operating in DP Alt Mode, so there should be less fuss in setting up your mobile workstation anywhere. But what’s even better is the USB-C slots can also charge your laptop with up to 65 Watts of power if you use the second port to connect to a wall socket.

The Lenovo ThinkVision M14 is effectively a mobile extension that doesn’t ask a lot, but its also a portable dock for your USB-C laptop. All portable monitors should take this kind of flexibility into consideration, especially since not everyone has the space to carry around multiple power bricks and cables. The only annoying characteristic many have noticed is that you don’t have cable management options, so opting for zip ties might be something you should look into as well.

The Lenovo ThinkVision M14 packs a 14-inch IPS panel with a 1920 x 1080 resolution, 60Hz refresh rate, and a 6ms response time. The backlight is rated at 300 cd/m2, while the contrast is limited to 700:1. These aren’t the usual numbers we see on desktop monitors, but you have to remember that the M14 is designed to be portable instead of eye-popping.

The pixel density of the Lenovo ThinkVision M14 is almost comparable to a 1440p screen at 27 inches. This means that images are sharper and cleaner to look at since the edges will not have softening effects. Text and small objects will still be legible for most users, so scaling isn’t entirely necessary.

The Lenovo ThinkVision M14 is the most vibrant portable monitor we’ve seen thanks to its 99% coverage of the sRGB gamut. Color accuracy could be better at its current DeltaE of 2.7, but you can’t calibrate the monitor anyway so it matters less. The screen’s color temperature is slightly biased above 6500K so it appears cooler than some sRGB monitors we’ve seen.

The contrast ratio, on the other hand, peaked at 750:1 which indicates that the Lenovo ThinkVision M14 will not do well if used in the dark. Black images look grayish, while some scenes from games like Vermintide 2 tend to look a bit washed out. The backlight is bright enough for well-lit rooms at 280 cd/m2, so you might need to tone it down if you want safe levels for your eyes.

The Lenovo ThinkVision doesn’t handle blurring that good in fast-paced games like Apex Legends. You will see some trailing while panning the screen quickly, while some persistence becomes visible in stark transitions between colors. However, this performance is forgivable since this product was not designed for gaming like many of the monitors we reviewed.

Thoughts on the Lenovo ThinkVision M14

The Lenovo ThinkVision M14 is the best portable monitor you can buy at the moment thanks to its fantastic design and vibrant screen. We love the fact that you don’t have to wrestle with origami-style stands which are flimsy and tend to flip easily. We also like that the monitor can double as a dock for your laptop if its plugged to a socket, maximizing its value and usability while on the go.

Our biggest complaint would be the lack of calibration options in the Lenovo ThinkVision M14’s functionalities. This model would be a great pair for prosumer laptops like the MacBook Pro which sees use in design and editing endeavors. Editing images in between two screens that aren’t fine-tuned can be a pain, especially for the meticulous.