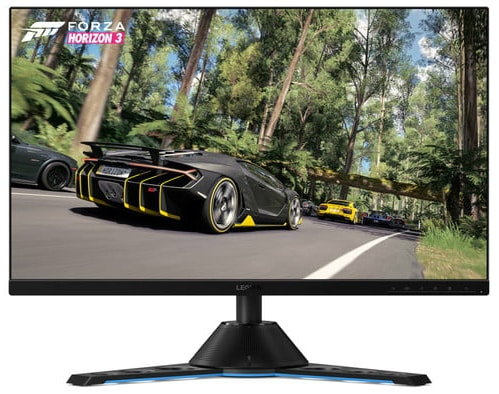 The Lenovo Y27GQ aims to preserve every bit of potential in gaming with the world’s first ultra-fast 240Hz display at a 2560 x 1440 native resolution. Lenovo’s earlier foray into gaming display didn’t go so well, but a grand redemption can be expected from this model and its super-ultrawide CES 2019 siblings. Can the Lenovo Y27GQ and its cutting-edge specifications uplift the brand’s reputation with top-notch gaming performance? 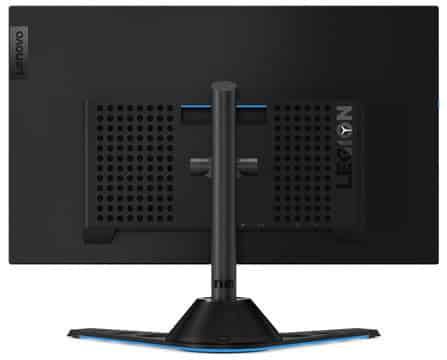 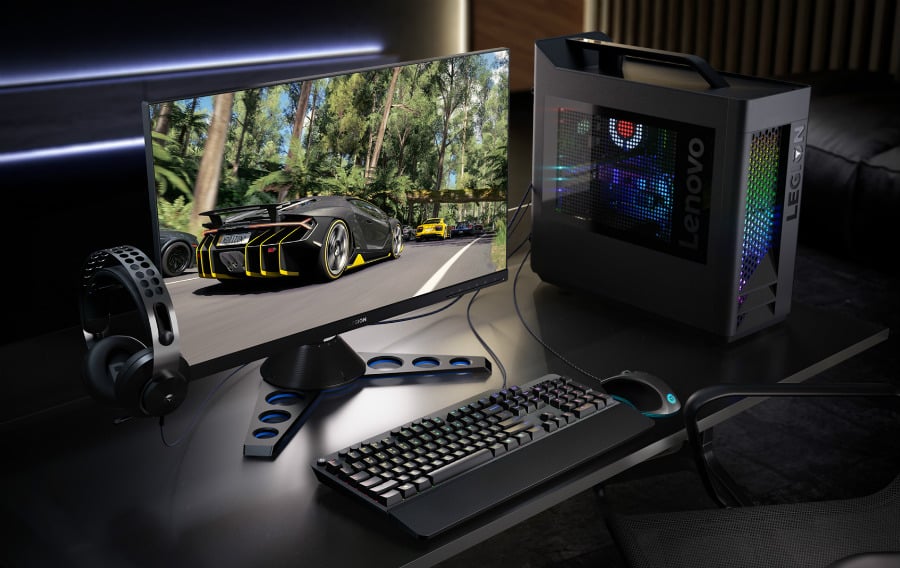 The Lenovo Y27GQ looks like a winner in the aesthetic department thanks to the brand’s attempt at mixing contemporary cues in a gamer-centric display. The chassis has an all-matte black appearance with sleek lines for a clean and unassuming look. The display is bezel-free, save for a bottom border which isn’t distracting, but detrimental to portrait setups.

The monitor’s final dimensions were not available at the time of writing, but we can already tell that the device is reasonably proportioned. The flat rectangular bulge at the rear makes the Lenovo Y27GQ ideal for flush mounting and easier to place closer to a wall.

We like the circular perforations Lenovo is using on their brand new Legion products which include several peripherals. This approach is apparent on the Lenovo Y27GQ’s rear panel vents and the base feet where is more decorative than the latter. It’s a unique touch which clean setup owners might find refreshing or unique.

The included stand for the Lenovo Y27GQ is also different from the regular penguin-feet variations we’ve seen on recent monitors. However, essential functionalities such as height, tilt, and swivel are still present. You can also opt for VESA mounting with this model via its concealed bolt holes at the rear.

The firm had to step up the connectivity options for the Lenovo Y27GQ due to its massive bandwidth requirements. The layout includes DisplayPort 1.4 and dual HDMI 2.0 slots for video inputs, indicating that the device might include a G-Sync HDR module. Previous G-Sync monitors had to make do with a DisplayPort 1.2 and single HDMI 1.4 connector except for the 4K 144Hz models which have the DP 1.4 port as well.

There is also a set of USB 3.1 slots which have fast-charging properties for your gadgets and peripherals. The speakers for the Lenovo Y27GQ will be generally better than typical built-ins since they are tuned by Harman Kardon. If you are wondering where the speakers are, it’s the cone-shaped object placed at the point where the base and the upright meets.

The Lenovo Y27GQ sports a 27-inch TN panel with a 2560 x 1440 resolution, 240Hz refresh rate, and .5ms response time. We should take the latter with a grain of salt, but it is indicative of a considerably faster pixel response time than the usual. The monitor’s brightness is unspecified, but it is advertised to have a 1000:1 contrast ratio and a certain level of HDR compatibility.

We’re all skeptical about the last statement since the Lenovo Y27GQ still utilizes a TN panel which is best if a product focuses on speed more than anything. Lenovo is claiming that the product is capable of comprehensive DCI-P3 coverage despite the panel tech, but we’re unsure up to what extent. They could have used special techniques such as Quantum Dot technology or Enhanced Phosphor treatments which increases color output.

But if you think about it, the Lenovo Y27GQ looks like its using the 2nd generation FPGA used for G-Sync HDR monitors. The I/O layout is a dead giveaway, but it might be a toned down version since the control unit costs half of what the Y27GQ will ask at launch. Nvidia also recently blurred the lines between G-Sync exclusivity, bringing monitors without chips into its compatibility list.

HDR performance is one of the aspects we are most excited about because its questionable based on the limited information we have. But what stands out here is the 240Hz refresh rate at 2560 x 1440 which we have yet to experience. It would take a ton of GPU power to run games at this level, but it also brings the future closer since QHD is the heir to 1080p’s sweet spot throne.

For most, 240Hz is overkill and we know for a fact that 144Hz or 165Hz is already sufficient in improving gaming visuals drastically. But for the hardcore and the competitive, each additional frame spells the difference between advantages and handicaps. 240Hz G-Sync monitors like the Asus PG258Q are over the top, but the value of the larger headroom is there and appreciable in real-world scenarios.

Thoughts on the Lenovo Y27GQ

The Lenovo Y27GQ is one of the monitors we are anticipating the most from this year’s round of CES 2019 reveals. The 240Hz QHD screen pushes the boundaries of high-end gaming further, similar to how 4K 144Hz displays changed the trends in the market. The addition of G-Sync HDR makes the deal sweeter, but the use of TN technology gives us some doubts regarding its effectivity.

The Lenovo Y27GQ is scheduled for an April 2019 release with a steep, one-grand ($1000) intial price. You can visit Lenovo’s official page or press release for more information regarding this cutting-edge device. You can also check this page for the latest updates on availability and specifications as they become available.