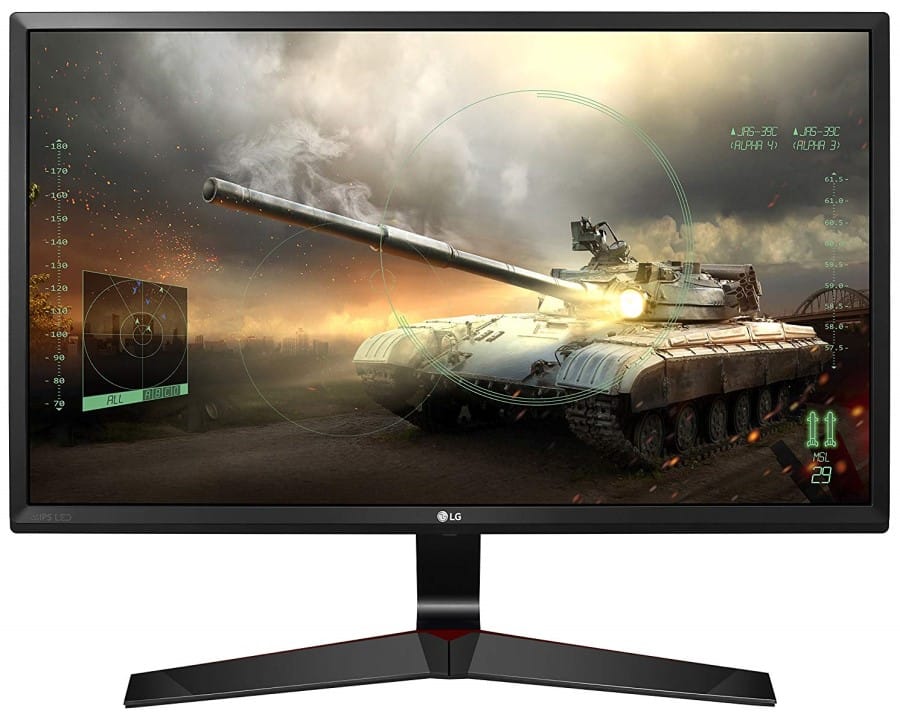 The LG 27MP59G-P-P presents excellent value if you consider its large IPS panel and attractive design. The model is also surprisingly marketed for gaming, unlike many of its similarly-priced competitors designed for office use. The LG 27MP59G-P promises excellent image quality and decent gaming performance for the price, but what kind of cut corners can we expect from it? 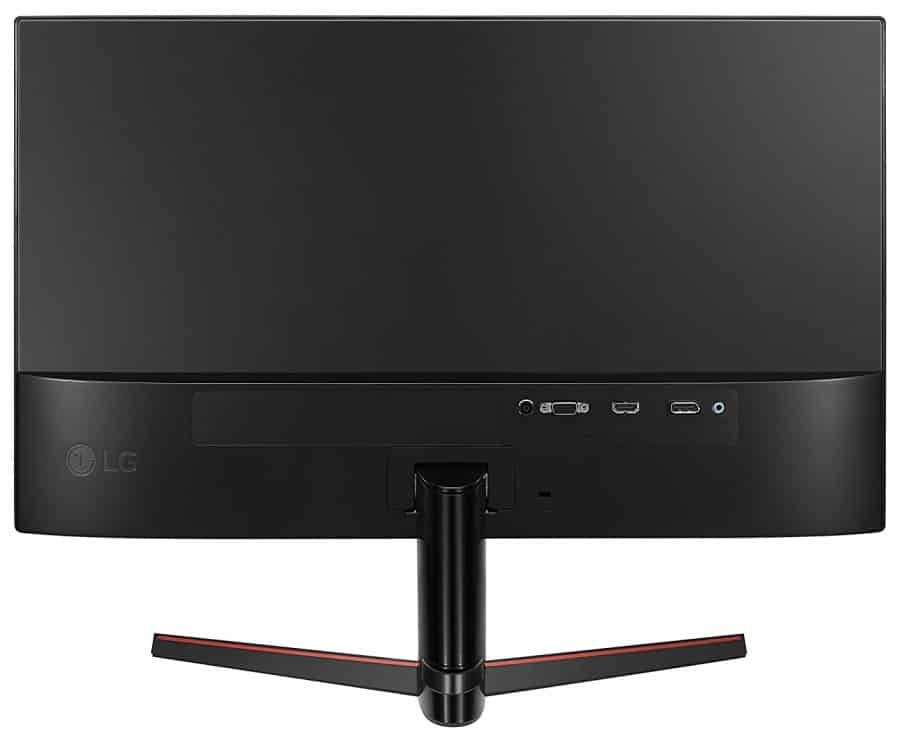 The LG 27MP59G-P is a budget model, but its design doesn’t steer too far from the brand’s general aesthetic for its gamer-centric models. The black with discrete red accents have always worked for our tastes, including our readers. This model isn’t bezel-free like the top-end offerings, but the plastic borders are within reasonable limits and unnoticeable during use.

Build quality for the LG 27MP59G-P is pretty good for a cheap gaming monitor since the device feels durable and stable. There is a slight wobble on the stand, but it shouldn’t be a regular issue unless you pound on your desk quite often. The plastics feel durable and thick enough to withstand bumps, and there are no cosmetic defects on the seams and edges of the monitor’s pieces.

The LG 27MP59G-P’s proportions are very modest, considering its a 27-inch variant that will dominate ordinary desks. Setup should be easy since you don’t need a lot of depth, plus it’s easy to find a monitor stand that can support its lightweight chassis.

The LG 27MP59G-P also includes the brand’s On-Screen Control feature which allows users to quickly access the monitor’s functions in the desktop. The device doesn’t have buttons, so you don’t have to fumble around for them and worry about miss-pressing the wrong ones. Everything is accessible with your mouse, and that’s a significant plus in our book.

The V-line design for the stand fits the LG 27MP59G-P’s general idea, with its sharp angles and red accent on the feet. It looks great, but the mechanism included can only offer tilt which will severely limit your viewing angle options. The monitor isn’t natively compatible with VESA mounts, so you have to live with its stock configuration. 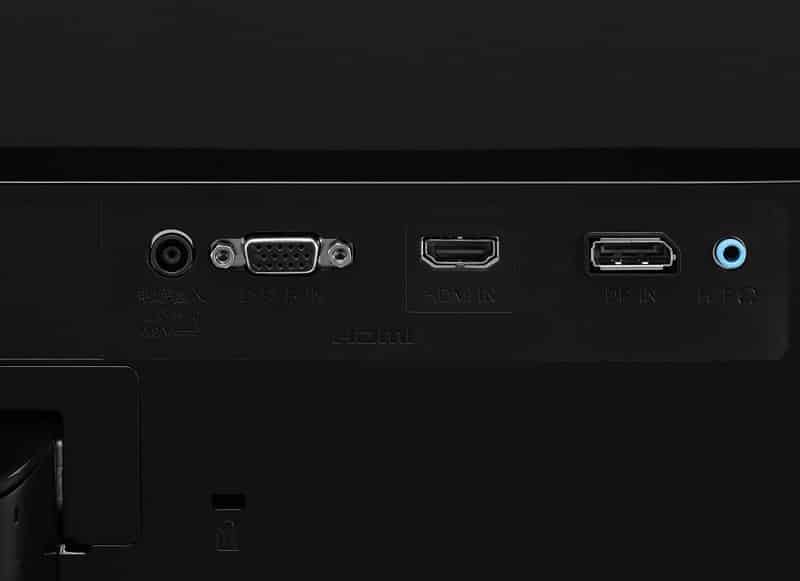 The connectivity layout on the LG 27MP59G-P is also rather simple, just like many of the brand’s offerings. It doesn’t include extras such as USB slots, but there is a DisplayPort 1.2, HDMI 1.4, and VGA for video inputs. There are no speakers, but there still is a 3.5mm jack for audio passthrough if in case you want to connect an external set.

The LG 27MP59G-P sports a 27-inch IPS panel with a 1920 x 1080 resolution, 75 Hz refresh rate, and 5ms response time. The backlight can only go up to 250 cd/m2 while typical contrast sits at 1000:1, which is common for most IPS variants. LG markets this variant for gaming, but its also suitable for office and school use due to its characteristics and pricing.

The LG 27MP59G-P’s 84 PPI means it will look less crisp than the more common 24-inch 1080p variants. Some images may look softer on the edges or a bit pixelated, but some competitive gamers prefer it that way. Small objects become more visible, while other items such as text will not require scaling, which is always great for ease of use.

The LG 27MP59G-P renders 99% of the sRGB color space by default, but its out of the box accuracy could use some tweaking. The Delta E average of 3.8 is too high since discolorations become noticeable compared to the real-life appearance of the image presented. The blues and greens are particularly misrepresented, making the tinge more noticeable than the usual.

Turning these primaries could help correct the image quality on the fly, but a colorimeter is still necessary if you want better overall accuracy. Color temperature is too cool for our tastes, but for some, the absence of warmth is a welcome change of pace. At least gamma is almost perfect at 2.21, so the screen doesn’t look washed out or dull.

The strength of the LG 27MP59G-P’s IPS panel lies in its contrast which reached 1100:1 at around 40% brightness. That rating exceeds many IPS models we’ve checked out and it creates better blacks and color separation. Dark scenes aren’t as profound as what VA panels can do, but the screen noticeably looks less grayish when viewed in the dark.

Panel uniformity for the LG 27MP59G-P test unit could do better since the left-most and bottom quadrants appear washed out compared to the center and right side of the screen. The backlight bleeding on some of the edges is to blame here since it creates some clouding at the mentioned sections. If you decide to buy this monitor, make sure you get it from a store with excellent return terms so you can try for a better unit if the first suffers from these issues.

The LG 27MP59G-P does have a bit of headroom in its refresh rate, but it still isn’t fast enough when it comes to pixel transitions. Some blurs become noticeable when you swipe or pan the screen, while a bit of persistence becomes apparent during drastic contrast or color changes. Using the monitor’s overdrive setting and its optimal level will decrease these flaws, giving you a cleaner and smoother image.

The LG 27MP59G-P is a FreeSync monitor and G-Sync compatibility works on it, but the latter isn’t without issues. Frame skipping happens if you try to activate this gaming feature, so we wouldn’t recommend it if you want to use an Nvidia GPU. Input lag sits at 9ms, so there are no delays or “de-synced” instances during gameplay.

The LG 27MP59G-P is an attractively designed and affordable monitor for everyday use, but its flaws might make you want to check elsewhere. The color quality isn’t as good as we had hoped considering the brand’s reputation, although its excellent contrast makes up for it. The extra refresh headroom is nice to have if you game on a budget, while the monitor’s FreeSync functionality makes it ideal for budget AMD rigs with Radeon iGPUs and GPUs.

The monitor is also responsive once its overdrive feature is utilized, plus input lag is lower than most 60Hz or 75Hz variants on the market. However, we could only recommend the LG 27MP59G-P if you will take the time to work with its settings to get a better picture and if its physical limitations are acceptable for your setup.