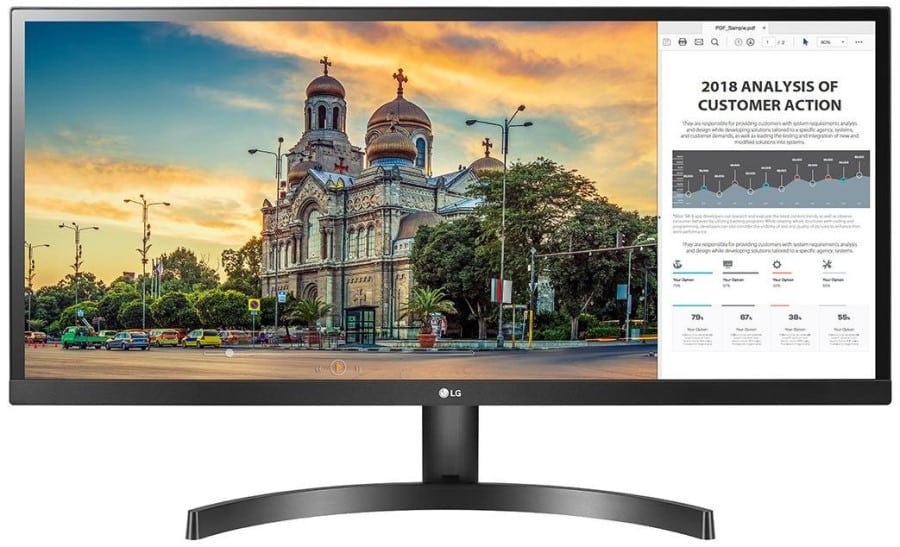 The LG 29WK500-P is an excellent budget option for users who want an upsized IPS panel for multitasking and productivity at home, school, or in the office. However, the 2560 x 1080 resolution is also an attractive selling point for gaming, making this model an easy on the pocket all-rounder. The LG 29WK500-P is unbelievably cheap compared to a lot of its typical aspect ratio cousins, but what kind of performance numbers can we expect? 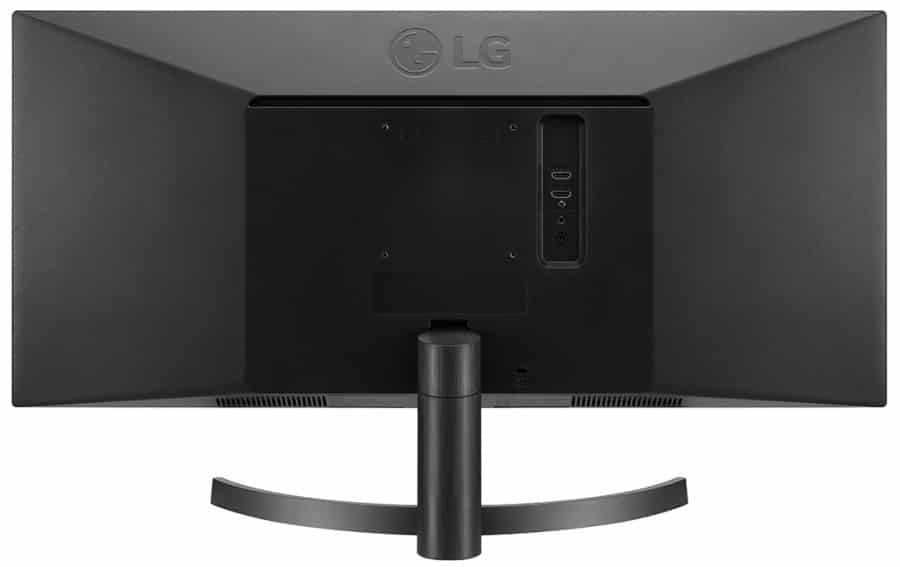 The LG 29WK500-P doesn’t look too different from its higher-tier 29WK600 sibling, but it doesn’t have the premium-looking matte white chassis. We think the all-black look still works for a lot of tastes, especially since it’s bound to look newer and cleaner in the long run. The display looks bezel-free at a glance, but panel borders are still visible on the top and sides, although they aren’t that thick to cause concern.

What we like about the LG 29WK500-P is its bias towards a level of sophistication instead of mediocrity that many budget monitors offer. The proportions are excellent and the device looks streamlined and clean. The base does protrude too much at the rear, but its total depth which slightly exceeds eight inches shouldn’t cause too much trouble. Build quality is solid, but the mechanism used for models like this induces a slight wobble that is only troubling if you have very heavy hands.

But on a positive note, the plastics used on the LG 29WK500-P feel sturdy and reliable despite its low pricing. There are no cosmetic defects on the test unit such as gaps or sharp edges, and we’re expecting every retail unit to follow suit.

Another excellent characteristic of the LG 29WK500-P is it doesn’t need hard-to-press buttons to enable users to access its features. The brand’s On-Screen Control tool lets you access the OSD menus directly from the desktop with the convenience of your mouse. This makes it less annoying to tweak the screen according to your needs, especially in the dark where its easy to make mistakes and start at the main menu again.

The LG 29WK500-P doesn’t have a full range of ergonomics like its higher-tiered siblings, so setting viewing angles can be troublesome. The ArcLine stand is gorgeous to look at and it provides excellent stability to the ultrawide monitor, but its lack of adjustments will be the main deal-breaker here. Thankfully, you don’t have to live with this limitation permanently since you can swap it with a 100 x 100 VESA mount.

Another limitation you have to accept with the LG 29WK500-P is its connectivity layout which doesn’t include a lot of options. The rear-facing panel at the back only includes dual HDMI 1.4 slots and a 3.5mm jack for audio pass-through. This characteristic shouldn’t be an issue for daily operation, but many GPUs are already focused on using DisplayPort for its higher performance.

There is also no built-in pair of speakers for the LG 29WK500-P, obligating users to use headsets or an external pair if audio is part of the process. Frankly, this doesn’t present a substantial impact on the monitor’s value, but it would be nice to have them for users who want to get the absolute best deal in the market.

The LG 29WK500-P sports a 29-inch IPS panel with a 2560 x 1080 resolution, 75Hz refresh rate, and 5ms response time. The brightness on this variant is lower at 250 cd/m2, while typical contrast remains the same at 1000:1. These aren’t gaming or photo-editing specs, but the extra horizontal space should prove valuable for multitasking or immersive entertainment purposes.

The resolution of 2560 x 1080 at this size does not create pixelated images since the PPI is more or less the same on a 1080 24-inch monitor. The screen looks crisp enough for games and movies, while school or office work will not be a pain since you won’t need to use scaling to make text legible. The biggest gripe we’ve seen on 29-inch monitors is that they appear too narrow since the vertical space is more comparable to a 22-inch display.

The LG 29WK500-P punches above its weight when it comes to color rendering thanks to the brand’s expertise in IPS technology. The screen produces 99% of the sRGB gamut with an acceptable accuracy of Delta 2.6. The color temperature is slightly warmer than the ideal 6500K, but overall, the screen doesn’t require calibration with a colorimeter.

Another surprising imaging characteristic of the LG 29WK500-P is its contrast ratio, which managed to reach as much as 1150:1 once brightness has been reduced to 50%. Doing this adjustment also helps gamma to reach 2.13 which isn’t perfect, but acceptable enough for regular use. The screen’s overall appearance isn’t ideal for photo editing, but most users who game casually or process documents for school and office won’t be bothered.

Panel uniformity is decent for most of the screen, but one lower corner had a slight backlight bleed that reduced the contrast and skewed the colors a bit. Some clouding is noticeable on this area when an all-black image is on display, but for most cases, it will not be a substantial issue. Colors remained with Delta 2.9 of the D65 standard, so there are no visible shifts in color unless you have trained eyes or when a colorimeter is used to scan the LG 29WK500-P.

The LG 29WK500-P isn’t a gaming monitor, but its relative performance makes it useful for casual or immersive titles such as The Witcher 3. The pixel response time isn’t as fast we’d hope, inducing some blurs in fast-paced sequences or when you pan the screen quickly. The Fast overdrive setting helps to reduce this issue, but it adds a tiny amount of overshoot in return.

The LG 29WK500-P is a FreeSync gaming monitor with a 48Hz to 75Hz functional range, making this a great pair for entry-level to midrange Radeon cards. We don’t recommend this monitor if you want a model that’s G-Sync compatible, but then again, 2560 x 1080 should be easy as peas for many of the green team’s GPUs. Input lag is excellent at 9ms even if it’s not the fastest we’ve seen, so there will be no noticeable delays or “de-synced” instances.

You can’t argue with the LG 29WK500-P’s price, especially after seeing what it can do and comparing it to other budget monitors. The IPS panel used in this iteration provides an output that will exceed many expectations, plus it gives you extra room to work or play around with. The design is limited when it comes to features, but the monitor doesn’t look cheap or mediocre in the aesthetics department.

Of course, there are limitations you have to live with when buying budget monitors like the LG 29WK500-P. You don’t get a lot of extras which will further extend the value, but what counts the most is the imaging performance which will affect your daily use more than anything. Overall, this product is a great buy if you don’t want to spend a small fortune on an upsized display for school or office work, along with some casual gaming after hours.