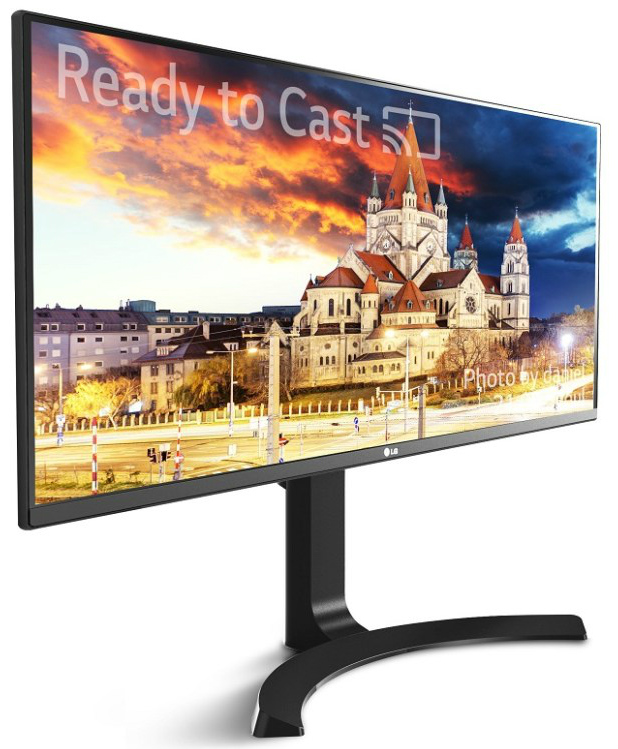 LG’s engineers have been working extensively on integrating prevalent or emerging technologies into their latest products to deliver innovative and premium products for the display industry. This statement is according to the President of LG Home Entertainment, Brian Kwon. Apart from the HDR-capable LG 32UD99, the Korean company is also set to reveal an extensive line of cutting-edge monitors to compete with other tech giants in the display arena. One of these models is the LG 34UM79M, a 21:9 aspect ratio IPS panel monitor. The form factor is nothing new, as we have seen similar products in the already extensive line of displays from LG. But what sets this model apart is its built-in Chromecast capability, enabling streaming of various content from different sources. Currently, there are no similar products compatible with Google’s streaming tech, unless you buy a separate Chromecast dongle and insert it into a USB slot.

The LG 34UM79M has a form factor similar to the LG 29UM68-P we have mentioned in one of our guides for the best Ultra-wide monitor guide. This latest model has a brushed black finish similar to other LG offerings, and it also sports the ArcLine stand standard in the Korean company’s many models. The bezels on the face of the display look extra thin thanks to LG’s Borderless design trend. There is limited information available, but judging from the general mechanical capabilities of previous ArcLine iterations, this model may only include tilting or it may also include height adjustments just like the bigger LG displays we have seen.

One prominent feature of this offering is its built-in Chromecast capability. What this does is it allows streaming of content such as movies, music or games from other mobile devices such as phones and tablets. This product also integrates LG’s Dual Controller Plus feature, enabling users to control two host sources with a single keyboard and mouse. You can also control the OSD features with the LG Mobile+ Monitor App, making it convenient to adjust the settings without using confusing and flimsy buttons.

Display and Performance of LG 34UM79M

Unfortunately, we cannot comment on any actual results from the real-world performance of the LG 34UM79M, since there are no demo units available and the company is keeping quiet about exact details. We do know, however, that this monitor has an expansive 21:9 aspect ratio flat IPS panel enhanced by LG’s proprietary image enhancement technology. This modification allows for accurate color reproduction and vibrancy without over or under saturation of the picture.  We are assuming that this model will have a 3440 x 1440 resolution, a step up from 2560 x 1080 found on the previous ultra-wide mainstream offerings from the company.

The actual usefulness of controlling devices via Chromecast is obscure since you already have a means of operation for each gadget. Also, this addition could be redundant for a device intended to connect to an already capable CPU. You can already stream online content from Netflix and similar providers over the browser of your PC, but we think the goal of enabling Chromecast with a single device may find its usefulness with users who live with limited spacing, and the LG 34UM79M’s goal is to eliminate the need for another TV. Although some users might find it difficult to adapt to the ultra-wide form factor of this product, and most online contents are still in 16:9, so you might end up with the annoying black borders on the side. Despite the questionable inclusion of Chromecast, we think it is a good sign that LG is committed to integrating modern tech with its products since efficiency and convenience are always beneficial to the consumer. Details are still unclear, but once CES 2017 hits this coming January, we will be able to paint a clearer picture of how the LG 34UM79M performs.