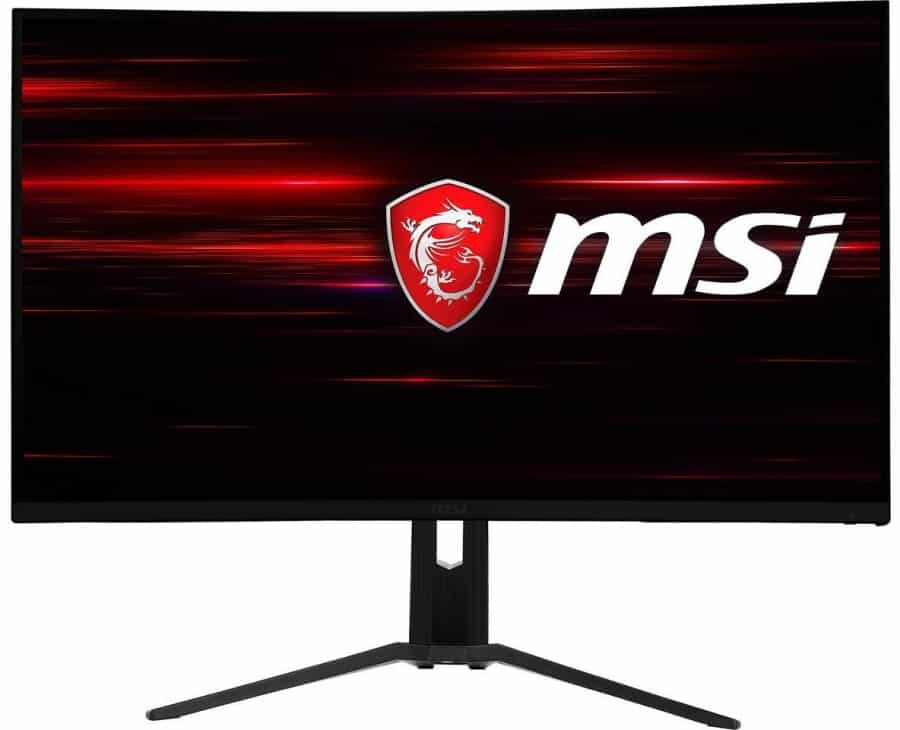 The MSI MAG321CURV offers a unique, curved screen that is designed to immerse and impress your visual senses for your chosen games. Curved 4K monitors aren’t as common as TVs, so the market or demand for a model like this is pretty much alive. The MSI MAG321CURV is the brand’s first foray into 4K displays, so let’s check out if they nailed it this time. 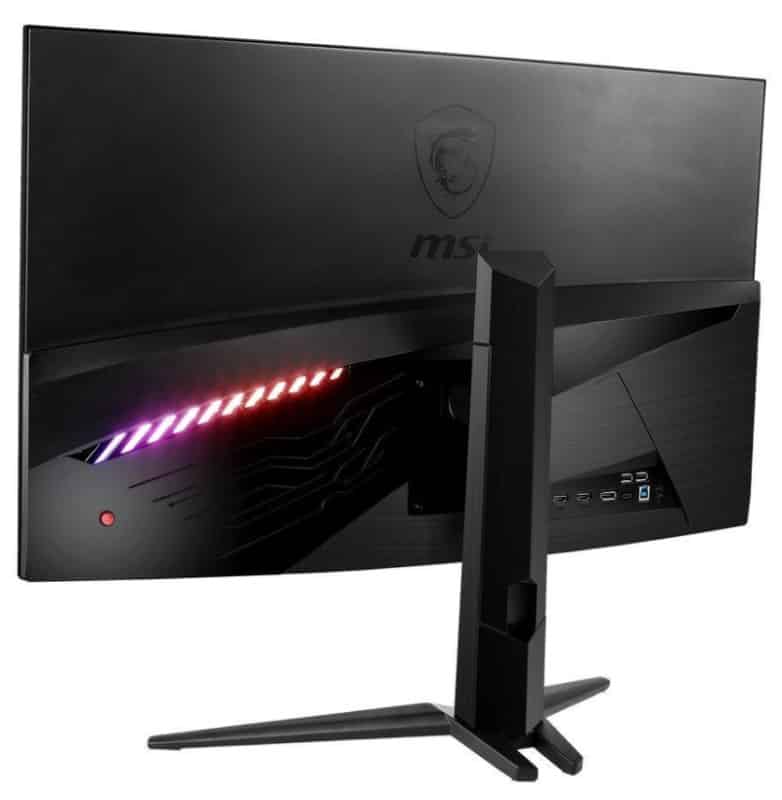 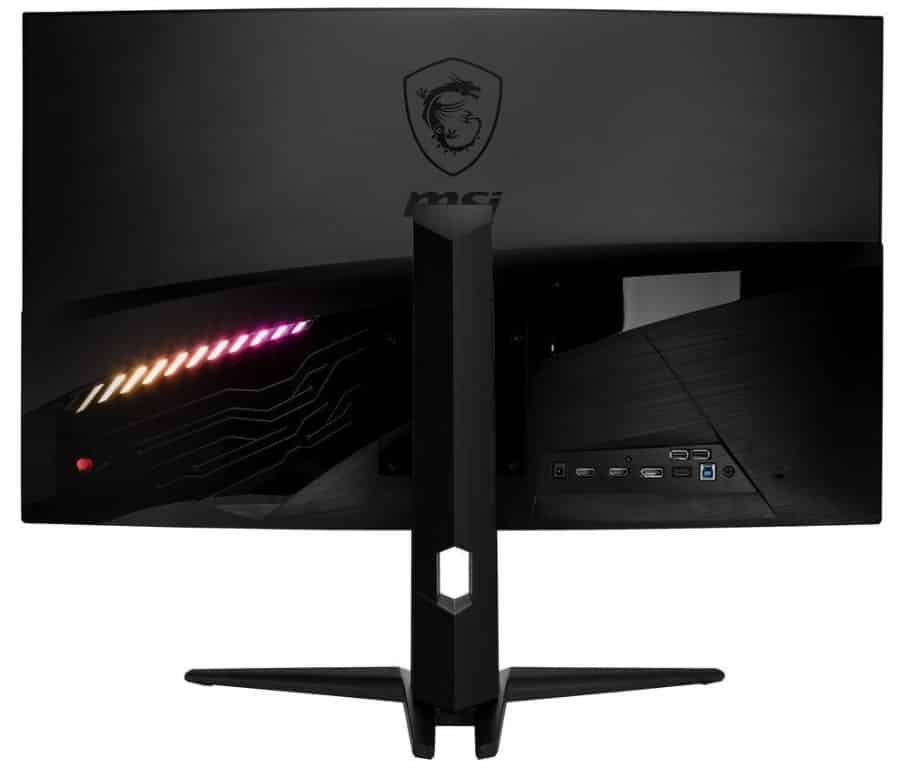 The MSI MAG321CURV sports a redesigned aesthetic compared to its siblings the Optix line, giving us a cleaner-looking and more streamlined monitor. The matte black which looks almost like a darker gunmetal shade is a nice finish fit for a premium product. The three-sided borderless design is heaven-sent for displays like this, where immersion and unobstructed viewing are the main selling points.

The MSI MAG321CURV feels very solid compared to the brand’s other offerings due to its metal frame reinforcements. This design gives the monitor excellent durability and reliability, plus the extra weight helps to keep the massive display stable on a desk. We did not notice any visible manufacturing defects on any of the parts, indicating that MSI has stepped up its quality control game for its newer models.

The rear panel of the MSI MAG321CURV’s chassis is another interesting feature since it includes a dash of RGB LEDs for lighting accents. The strip is bright enough to produce bias lighting if you set the monitor close to a wall. However, take note that you have to plug the device’s USB upstream port to your PC and download MSI’s Gaming OSD 2.0 to be able to control this feature properly.

We’re glad that you don’t have to deal with pesky buttons on the MSI MAG321CURV which has a joystick at the back. The tool is accessible on the right-hand side, but you don’t have to stretch far to reach it. We think that’s a minor inconvenience compared to trying to press buttons for a specific function and ending up mis-pressing the wrong ones.

We dig the redesigned stand for the MSI MAG321CURV which includes tilt and height adjustments. Pivot and swivel are unnecessary since curved displays mandate that you have to sit at the very center to enjoy its benefits. You can opt for VESA mounting if you want more flexibility, but that adds cost to the MAG321CURV’s already excellent price point.

It’s also worth noting that the tri-legged base design of the MSI MAG321CURV doesn’t eat up a lot of space since only the tips touch the surface of the desk. This gives the monitor a nice, floating look, without sacrificing its stability.

The I/O layout on the MSI MAG321CURV is’t something we’d consider shorthanded either. It includes DisplayPort 1.2 and dual HDMI 2.0 slots for video inputs, along with three USB 2.0 slots for accessories. But what stands out is the USB 3.1 type-C slot which can also double as a video input for laptops or providing charging power to mobile devices with a maximum wattage of 15 Watts.

The MSI MAG321CURV packs a 32-inch curved VA panel with a 3840 x 2160 4K resolution, 60Hz refresh rate, and 4ms response time. This model is HDR compatible, but its 300 cd/m2 backlight falls short of VESA’s DisplayHDR 400 standards. Contrast is rated at 2500:1 which is lower than what is usually listed for VA types, but it still is exceedingly higher than the best IPS or TN variants out there.

The MSI MAG321CURV’s refresh rate is rather limited considering that we now have 144Hz options, but it’s still reasonable by today’s standards. High-end PCs will struggle to go past that threshold in many titles, plus MSI is also marketing this model as a console gaming monitor. Its connectivity says a lot about that since it can handle two computers and two consoles at the same time.

4K is a perfect fit for 32-inch monitors since the tight pixel density isn’t too cramped, so objects are more visible without softening or loss of detail. It’s easier to read text or see peeping heads in the distance with a monitor of this size, making it easier on your eyes than a 27-inch model. Couch gaming is also doable, cementing the fact that MSI pegged this model perfectly for console use as well.

The MSI MAG321CURV isn’t as vibrant as we’d hope, even if it reaches 100% of the sRGB gamut. Color accuracy out of the box is excellent at the Delta E average of only 2.3, while color temperature looks balanced and close to the 6500K point. Gamma is way off at 2.3, contributing to the washed-out colors and the generic look of cartoony graphics from games like Apex Legends.

But on the other hand, the MSI MAG321CURV does good in contrast as expected due to its VA panel’s properties. The average reaches around 1950:1, so blacks and grayscale are excellent and well-suited for immersive gaming.

But then again, the MSI MAG321CURV pulls back this positive characteristic with poor panel uniformity, showing as much as 15% deviance on the bottom quadrants. The display shows some clouding issues, especially when HDR mode is enabled. This flaw could vary between panel to panel, so make sure you have the option to return and replace the monitor for a better unit.

The MSI MAG321CURV isn’t truly capable of HDR visuals, and you’d know just by looking at its primary specifications. The backlight can exceed its rating and go up to 330 cd/m2, but it falls short of even the most basic DisplayHDR standard. There is also no effective backlight solution on the monitor, so all it can do is try to emulate HDR effects.

Blurring and pixel persistence are, unfortunately, still present with the MSI MAG321CURV due to its VA panel. Fast-paced sequences show noticeable trailing, making the monitor less ideal for competitive shooters. However, the overdrive feature in “Fast” mode which is its medium setting does a decent job at clearing up the screen.

The MSI MAG321CURV is a FreeSync gaming monitor, but it works up to some degree with G-Sync compatibility mode. This variant isn’t certified while 4K displays are known to be more prone to issues here, so we wouldn’t advise you to buy this model based on this characteristic. Input lag sits at 10ms which isn’t the fastest we’ve seen, but its decent enough for most games on both PC and console.

Thoughts on the MSI MAG321CURV

The MSI MAG321CURV is a unique option due to its curved 4K screen that isn’t as common as many of us would hope in the market. MSI’s design team have been doing fantastic jobs with their latest releases, and this offering isn’t an exception. This model is a great choice if you want an immersive screen for multi-platform play, but it isn’t without limitations.

The curved 4K screen is a crucial selling point for the MSI MAG321CURV, but its image qualities will deter the pickiest gamers. The screen’s overall image quality could use a lot of improvements, but the device’s OSD isn’t well equipped enough for manual tweaking. It’s a decent PC and console monitor, but we’d love to see its next iteration which hopefully, addresses the mentioned issues.