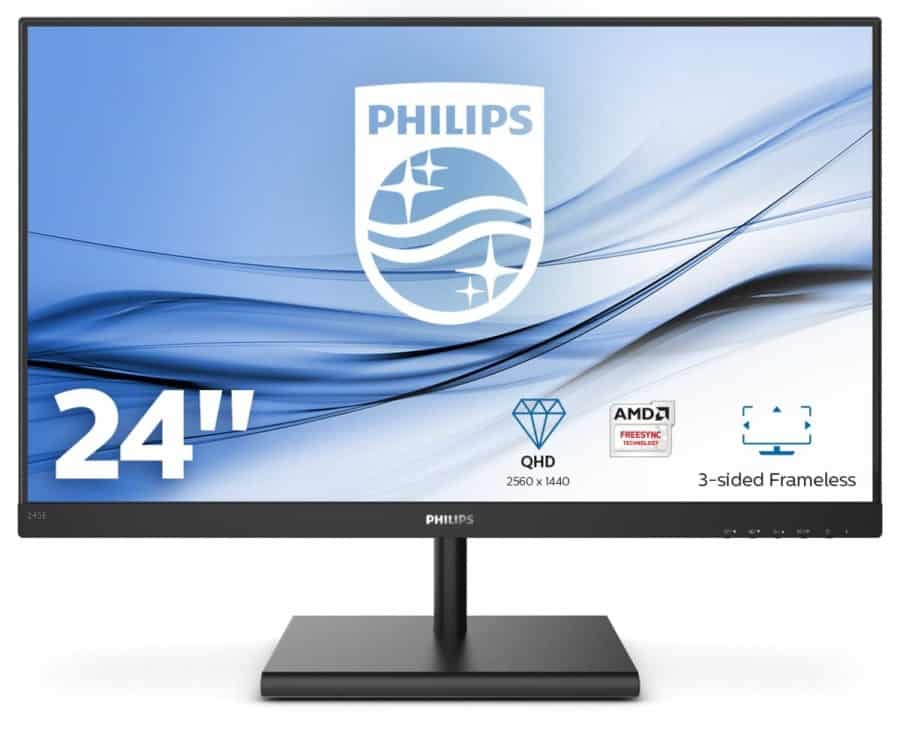 The Philips 245E1S offers an upsize in sharpness and virtual space at a very friendly price that makes it ideal for all-around use. It’s rare to find 1440p monitors at this price range, so we’re curious to see what kind of limitations are presented in the package. The Philips 245E1S like many of the brand’s monitors offer tremendous value and practicality, but can it punch above its price point? 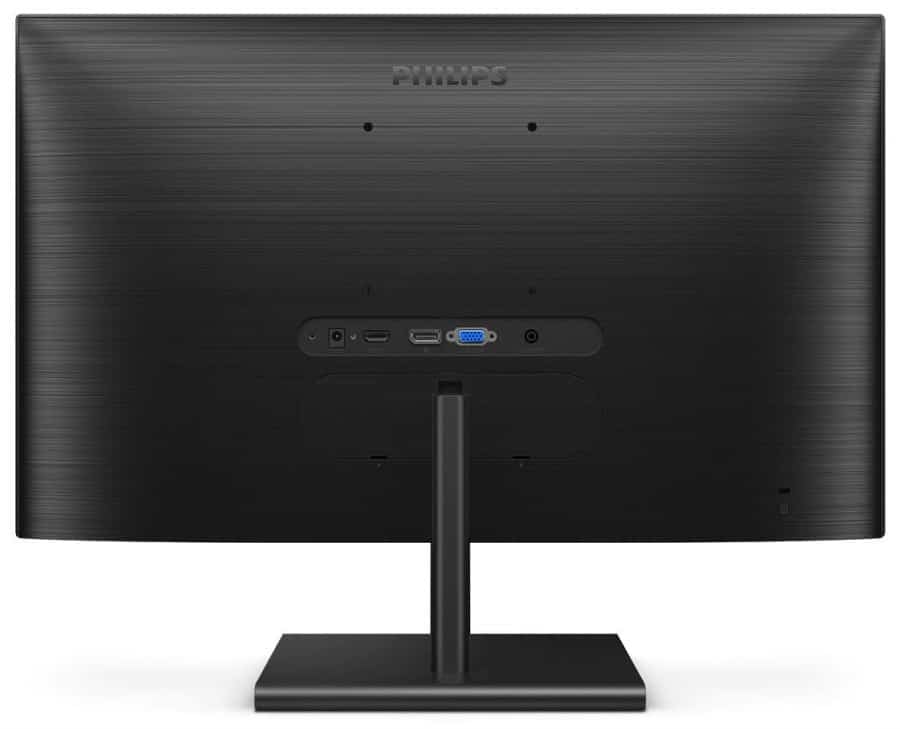 The Philips 245E1S is a budget-oriented monitor, but it isn’t designed to look like your typical run-off-the-mill office display. The brushed matte black texture of the chassis adds an illusion of opulence, while the slim proportions create a silhouette that’s appealing. The display is also bezel-free on three sides, giving users a maximized view of the QHD screen that’s free from distractions.

What’s great about the Philips 245E1S’s its the flexibility it allows as far as placement or setting up is concerned. The device once fully assembled takes up less than eight inches of depth on a desk, making it ideal for study corners in dorms or in condos with limited space. This characteristic always boosts a product’s sellability, especially during back to school seasons.

Build quality for the Philips 245E1S is decent overall since there are no weaknesses in the plastics or any visible cosmetic defects. The panels are sturdy even if they feel thinner compared to what premium models have, plus there is no wobbling unless you pound on your desk. Also, the heft of the base is sufficient in keeping the monitor upward, while its placement towards the rear makes it easy to place the monitor closer to a wall.

You also have to deal with OSD buttons on the Philips 245E1S instead of a preferrable joystick. It’s good that the layout is labeled and easily accessible from the front, but this kind of implementation isn’t convenient, especially if you are using the monitor at night.

Various creature comforts are missing from the Philips 245E1S, but that is understandable since its from the brand’s economy or line. The included stand can only offer tilt for adjustments, limiting your viewing angle options by default. You can, however, buy a VESA mount for this device, although that adds to the overall cost.

Connectivity is also limited to the essentials, so there are no USB ports or speakers on the Philips 245E1S. You do get DisplayPort 1.2 and HDMI 1.4 for primary inputs which is great since DP is usually missing on budget models. There is also a VGA connector for older machines, plus a 3.5mm jack for audio passthrough.

The Philips 245E1S uses a 24-inch IPS panel with a 2560 x 1440 resolution, 75Hz refresh rate, and 4ms response time. The backlight is just right for daily use at 250 cd/m2, while the contrast ratio of 1000:1 is typical to many IPS variants. This model advertises wide color coverage and crystal-clear visuals for a pleasing experience.

Quad HD squeezed into a 24-inch variant creates 124 PPI or pixels per inch. This characteristic results in a crisp display that shows details cleanly and clearly minus the taxing requirements of 4K. Monitors like this model are great for users who are used to MacBooks and the like which also favor high-res screens in a smaller form factor.

The Philips 245E1S offers an excellent color profile right out of the box, so you don’t need a colorimeter to correct it. The panel covers 99.9% of the sRGB gamut, while average accuracy sits at Delta E 1.9. Color temperature is also well-balanced and close to the ideal 6500K point, so the screen isn’t too warm or cool-looking.

The contrast from the Philips 245E1S’s IPS panel also exceeded our expectations since it peaked at 1080:1. That’s a rare score for budget IPS monitors which seem to have trouble breaching past the 900:1 mark. Black luminance is still high enough to make some dark images look grayish, but color separation or definition is excellent.

The Philips 245E1S’s gamma also sits at a very ideal 2.19, and we found out that only a colorimeter can push it further to 2.2. Frankly, it’s unnecessary since the difference is minimal unless you are doing some heavy color-critical work. But then again, you should be looking at a more refined, prosumer variant if that’s the case.

Panel uniformity for the Philips 245E1S is another story since there are leaks on the bottom corners of the screen. Backlight deviance reached a high of 15% on these quadrants, affecting the contrast ratio and color uniformity of the screen. For the most part, deviances stayed within DE 2.5 of the D65 standard, but the corners look cloudy and washed out in some scenes.

The Philips 245E1S can be set to 75Hz, but it does little to help the panel’s limited pixel responsiveness. Blurs and trails are visible when you pan the screen too quickly, and some fast transitions between colors reveal a bit of persistence. We recommend setting the monitor’s overdrive feature to its middle setting since using too much adds a lot of overshoot which is worse than the blurring itself.

The Philips 245E1S is a FreeSync gaming monitor with 48Hz to 75Hz functional range, but it’s not certified to work with G-Sync. The latter should work based on the specs, but we cannot guarantee that you will not run into issues. Input lag is excellent at 10ms for a 75Hz variant, so there should be no delays or “de-synced” instances during gameplay.

Thoughts on the Philips 245E1S

The Philips 245E1S is an excellent choice if price and image quality are both part of your priorities. The screen looks fantastic out of the box, so you don’t need to employ a colorimeter or tinker with the OSD apart from adjusting the brightness. The monitor isn’t a gaming variant, but its FreeSync feature and extra headroom in the refresh rate makes it a formidable option for casual fun.

Our main complaint with the Philips 245E1S is its panel uniformity which showed noticeable deviances. That aspect could vary between unit to unit, especially for IPS variants, but for some, playing the IPS lottery isn’t appealing. But overall, this model is bang for the buck, especially if you consider its imaging fidelity at default.