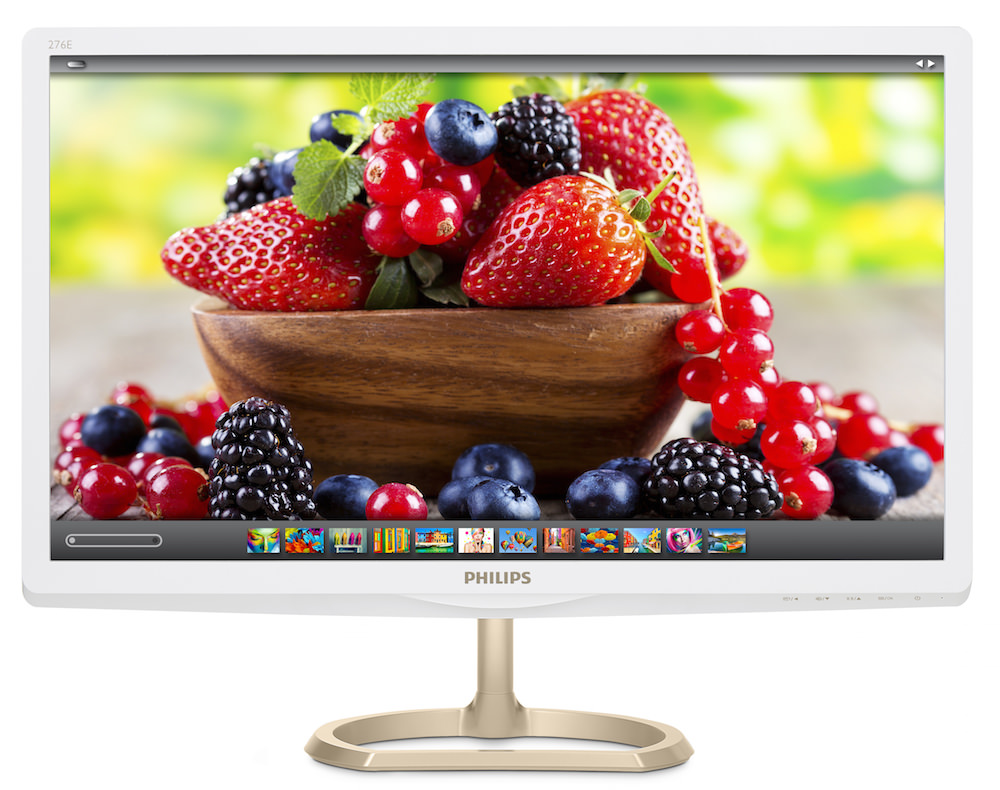 The Philips 276E6ADS is the first quantum dot gaming display that I have yet had the pleasure of putting my hands on. But does it deliver or does it disappoint?

Let us start with the monitor itself. The 276E6ADS features only what I would consider the basic inputs, VGA, DVI and HDMI, and no Displayport. It resorts to an external power brick. Something I don’t usually mind though I wish the cord were a little longer on this one, so it reaches the floor more comfortably. It has no comforts to speak of, so no USB hub and it lacks all other ergonomic adjustments other than tilt. Although it has an admittedly attractive metal base. But to add insult to injury, it does not feature VESA mount points. So other than putting a riser or some books under it on your desk nothing can be done to adjust the height.

The bezels are of average thickness so no complaints there. But while some people may be into white monitors to go with their setups. The use of glossy plastic anywhere that we might have to look at it is a pretty sore spot for me as are the touch-sensitive buttons on the bottom right for what must be the worst on-screen menu controls that I have yet encountered. They are poorly labeled unlike the genius ones on Acer’s Predator X34 and forced me to navigate deep within the menu just to change the input. The labels are also positioned in such a way that I had to lay my head down on the desk to see them. PS to gaming monitor makers all of them not just Phillips here. Glossy plastic is bad, tactile feedback and labels we can read on navigation buttons are good.

Ok, cool story but the reason why you are still reading this article is that you want to know if quantum dot makes any difference. This technology is as cool as it sounds and involves a sealed tube with these dots that react to blue light by shining red and green. But is this technology enough to make the Philips 276E worth any of the compromises that you might be making by buying it? It depends on who you are and what you want to do. Because of quantum dot monitor much like all the buzz and marketing nonsense around LED screens is still at its heart an LCD screen. It inherits many of the same characteristics that you would expect from any LCD. In this case, the unexceptional black levels of IPS-ADS panel make dark scenes look more gray than black and while casual gamers won’t notice the difference its pixel response times are nothing to write home about for competitive gamers. But what you get in return is the as advertised wide color gamut support in the form of accurate 99% coverage of the Adobe RGB color space. This in spite of the unexceptional out of the box color accuracy is a huge boon for digital imaging hobbyists and prosumers who’ll be super amped to have the ability to work on photographs that they have taken in Adobe RGB mode on their camera natively on their workstation to get the best possible printing results at an unheard-of price point.

The Phillips 276E6ADS even alongside a decent colorimeter for calibration is still going to be fighting in a much lower price class than other monitors with similar color space support. But that does not make the 276E6ADS a slam dunk, and I have one more major issue with it. The way it is presented in the marketing materials and the reviewer’s guide as more vibrant, thanks to its ability to represent a wider range of colors, is irresponsible. As far as I can tell unless you color calibrate it and set up an ICC profile to correct this native Adobe RGB monitor to the smaller sRGB color space which is used almost exclusively on the web on the PC you are going to end up with inaccurate over saturated colors. Think of it this way, a program like your web browser will call for 100% green assuming a fully sRGB pipeline; then the monitor is going to go to town delivering a 100% Adobe RGB green that the program had no idea that it could display. Compounding the issue is the fact that even profiling is not a perfect solution, while Mac OS handles color corrections pixel by pixel system wide, on Windows it is handled on an application by application basis with many common programs like games for example not being ICC aware. So using this monitor you are going to end up with too high color saturation, in a way that might make it look punchy next to a competitor on a shelf but displays the content in a way that the creator did not intend. Most monitors every single one that I have ever seen with wide gamut support deal with this simply by having an sRGB mode often with a quick switch button within the on-screen display. But for some reason, the Phillips 276E6ADS does not work properly. I got the same 99% Adobe RGB coverage in sRGB mode, and Phillips’ response telling me that the oversaturated greens were probably because I am not used to wide gamut displays. I don’t believe they are intentionally misleading customers, but they don’t seem to understand the issue here, which leads us finally to a couple of conclusions.

Conclusions about this monitor

Number one is that whether this monitor is for you or not. Wide gamut support is coming to the mainstream. Thanks to the quantum dot. At this kind of pricing, I would be surprised if every LCD doesn’t support it in a couple of years time. What a cool technological advance to tide us over while we wait for OLED to deal with its burning and cost issues.
And the conclusion number two is, we all need to practice new technology used responsibly. It is all fine and good to be ahead of the feature curve, but it is important not to lose track of the way that most people will use the product in the process. I am not saying that the 276E6ADS is a total flab of a product. But in my humble opinion, it is best suited for use as a secondary display for a hobbyist or a prosumer photo editor for example where ICC aware applications can be dragged over to it. But other applications like as a gaming monitor can be run on one with proper standard sRGB color space support.