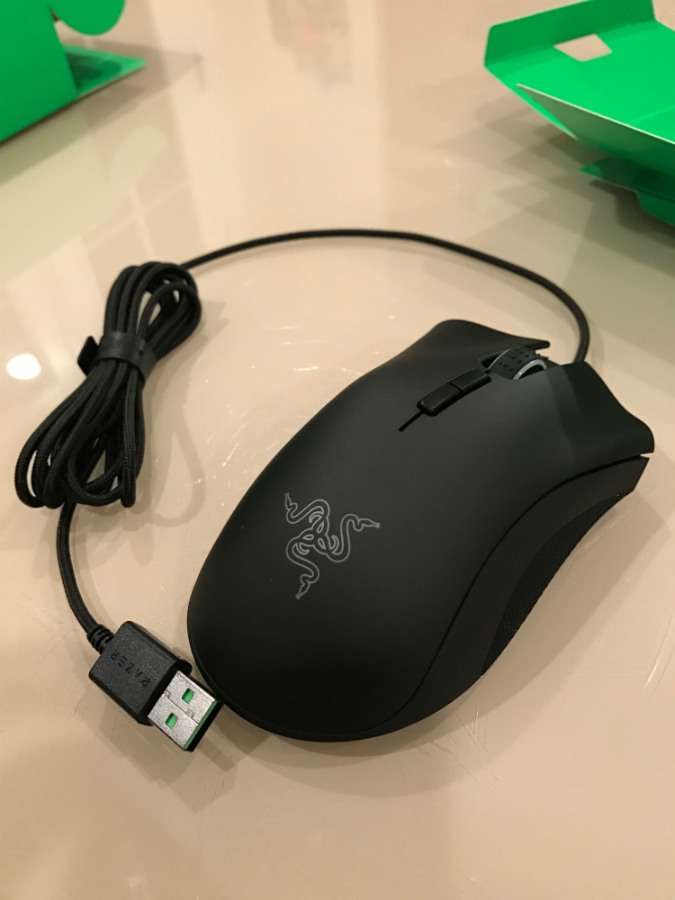 The Razer DeathAdder Elite is one of the best optical gaming mice we have seen, especially since it hails from a familiar and acclaimed design which has existed since 2006. Through the decades of its existence, the Elite version is the best that Razer has made. With DPI up to 16000, additional two “sniper” buttons, upgraded scroll wheel, and the most important addition of Omron mechanical switches which hopefully solves the age-old double clicking issue which is prominent among Razer’s fantastic mice. The features bring this latest iteration closer to the more upscale model, the Mamba TE, but let’s see if the DeathAdder Elite still packs the decade-old pedigree gamers loved. 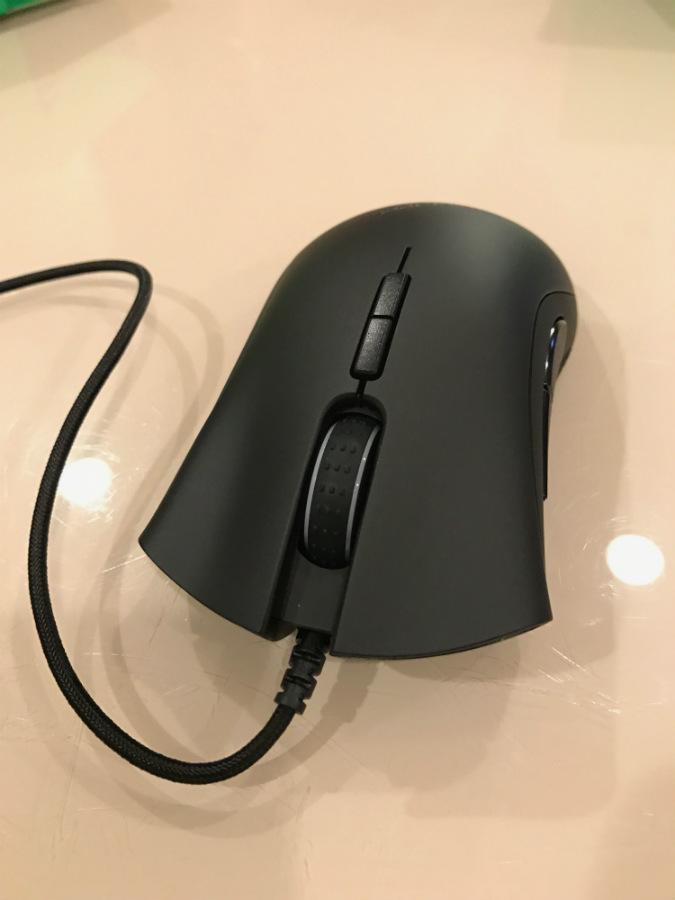 Razer greets you with a message which emphasizes on what the DeathAdder embodies, but the brand did little to change how the  Elite looks or feels in your hand since the ergonomically contoured body has not changed except for a few minor upgrades. The DeathAdder is very light and agile, while the thumb rest still holds that refined curve which cradles your biggest finger comfortably, all while making it convenient to reach the two thumb buttons which are the best suitable options for game-changing actions like melee kills or weapon swaps. The texturized rubber felt grippy and made of high-quality materials, a characteristic of Razer’s products.

The overall shape of the DeathAdder looks unconventional, but the bulges and curves serve a fantastic purpose for right-hand palm or claw grippers. You may find it a bit uncomfortable at first coming from other mice, but trust us, once you get used to the DeathAdder, only a few ever comes close to the intelligent design and layout from Razer. The Elite version now comes with seven buttons with the addition of two “sniper” keys which are ideal and by default, used to adjust DPI settings on the fly. This feature makes the DeathAdder a suitable weapon for FPS games like Battlefield 1 and Overwatch since these titles often require players to lower sensitivity for accurate shots.

The scroll wheel also gets an upgrade with edgy nubs for enhanced feel and control, while also getting a revamp in the responsiveness making it feel less of a free-wheeling tool. The left and right click buttons have a grooved shape designed to keep your two fingers comfortable but in total control since the design allows for better control of swiping movements. The DeathAdder’s highly-sought after upgrade lies under these pair of plastic surfaces. Razer in cooperation with Omron created new mechanical switches which faster response times and a fifty million click lifespan. We feel good about these new clickers, but time will tell if they finally fixed the annoying and long-standing double clicking issue which has plagued the Chroma version and other Razer mice.

Of course, any Razer product isn’t complete without the company’s fantastic proprietary Chroma Tech. You can choose from millions of colors across an RGB palette to create customized lights on your scroll wheel and the big Razer logo on the back of the DeathAdder. As far as we have seen, Razer Chroma is still the tech to beat between any of the RGB options available. You can program the lighting to create different effects with breathing, pulsing or steady modes, or you can select compatible game profiles in Synapse, so your DeathAdder responds to in-game events. To complete the pedigree, the Razer DeathAdder still features the matte rubberized plastic texture which lasts as long as the mouse and a braided 7-foot cable with a gold-plated USB connector which is as rugged as the rest of the wires across the entire product range. 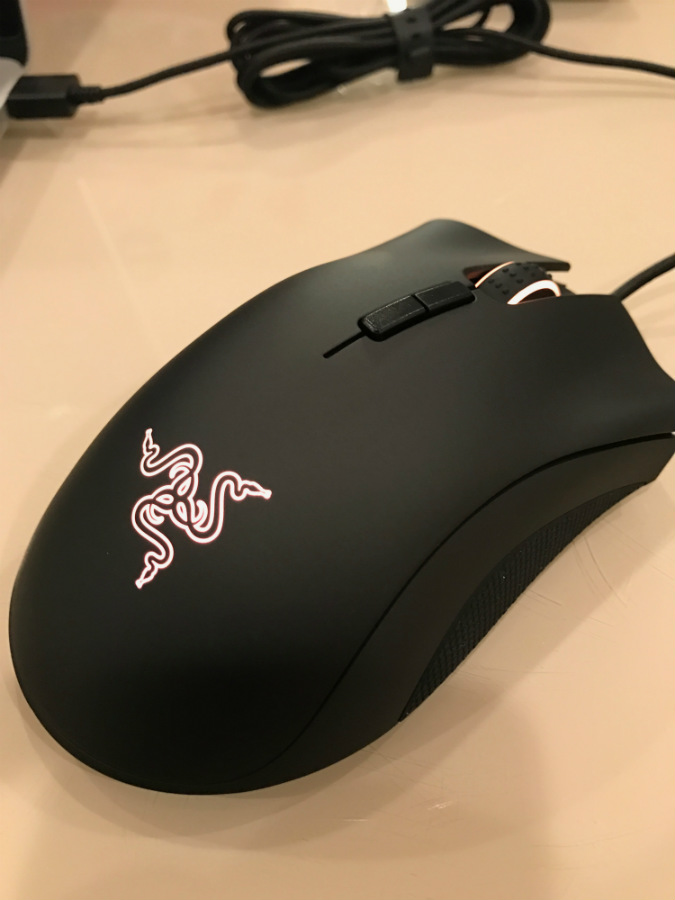 The Razer DeathAdder is one of the most accurate mice we have tested. The DPI can go up to 16000, but we only regularly use 400 to 1000 DPI for most games, especially for shooters. However, we did test this gaming mouse at its full range, and the high-quality optical Razer sensor did not judder or snap even at this speed. Of course, mileage varies from user to user, but it’s an incredible fact that the Razer DeathAdder elite along with the other mice from the company is highly customizable to suit different needs. You can set each of the seven buttons to various input commands via Synapse, but we found it best to leave the two new buttons to DPI switching since their placement makes them suitable as “sniper” buttons.

The DeathAdder’s polling rate can go up to 1000Hz, meaning the mouse can report up to a thousand times per second regarding its position to your PC. If you’re one of those who haven’t used a sophisticated mouse, the DeathAdder Elite’s precision and agility feels a lot like using a Camry then moving up to a 911 GT3. Typically, 500Hz is enough for most cases, but if you have a fast PC (who doesn’t nowadays?), you should use 1000Hz. The DeathAdder’s sensor can accelerate to 50g or track 450 inches per second, and you can adjust this setting between 10 increments in Synapse. But for us old school gamers, it was best to leave this at default to get a genuine feel in aiming in FPS games.

The bottom of the DeathAdder Elite features two wide Teflon gliders for easy swiping and movement on any mousepad, but we found the sensor to be more responsive on cloth type mousepads. Although, you can set what type of surface you are going to use with the DeathAdder elite to maximize responsiveness and accuracy. The mouse also weighs a mere 105 grams, making it lightweight and comfortable to use even for extended hours of usage. For comparison, the Logitech G502 Proteus Core, a competitor to the DeathAdder Elite, weighs in at about 145 grams.

Lastly, the Razer DeathAdder Elite isn’t a complete product without Chroma. The benefits of this lighting tech are subjective, but we do love Razer’s light show and the efforts the company puts into its development. If you play a lot of compatible titles, you can use Chroma to help discern your input choices such as knowing if your ultimate skill in Overwatch is ready so you can unleash hell on your opponents. The feature may be less useful than the other features we mentioned above, but we do have to say that Razer Chroma is a beautiful and enjoyable addition to any peripheral.

The Razer DeathAdder Elite is a fantastic upgrade to the ten-year-old design from Razer which is loved by gamers from different generations. Of course, if you have a DeathAdder Chroma in your hands, the Elite will feel less of an upgrade since everything about the mouse is the same except for a few minor additions. Although the most notable improvement lies in the mechanical clickers, Razer used to solve the double-clicking and premature failure issues of past models. Of course, only time can tell if the Omron switches are the final cure to Razer mice woes. Still, the DeathAdder design is one of our favorite layouts for its superb comfort and control, accuracy and build quality. If you are in the market for a new gaming mouse, the Razer DeathAdder Elite should at least, make it to your top three. Also, if you are one of the victims of the double click flaws, have faith in the Cult of Razer and try out the new Death Adder Elite.