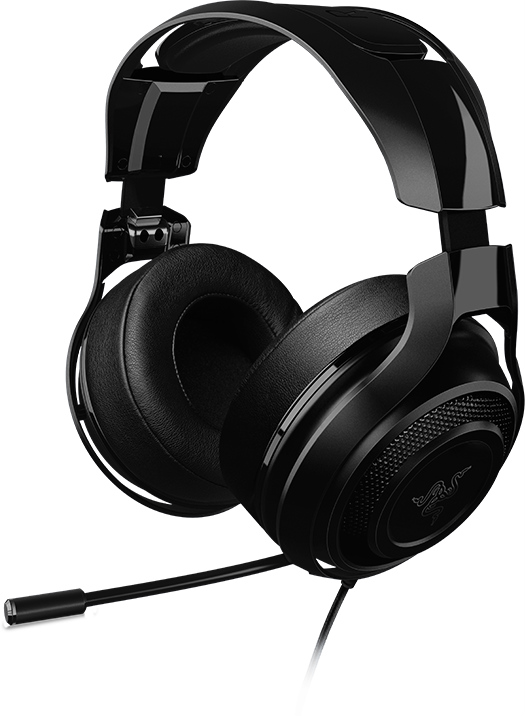 The Razer Man O’ War is a great and comfortable gaming headset with virtual 7.1 surround intended for the hardcore. This model is Razer’s next attempt at the gaming headphone market and their latest release after a long time since the Kraken. This award-winning company typically only releases and promotes a single headphone model at a time, and we think that the Man O’ War series is out to impress with its smart design and excellent audio capabilities. A great sounding set of speakers or headset is crucial in completing a high-quality gaming experience and are the next best things to having one of the best gaming monitors. Great visuals and audio go hand in hand, so let’s see if the Man O’ War is the total audio package. 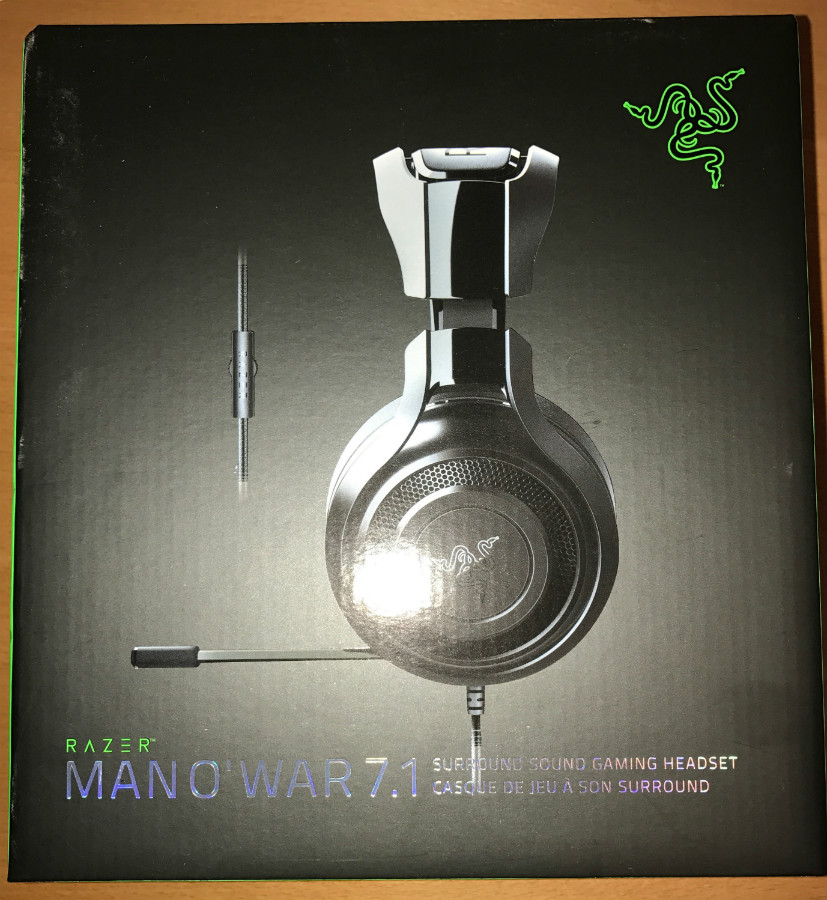 The Razer Man O’ War is a behemoth of a headset, but it does have the meat that comes with the weight. The massive, round earcups hold 50mm drivers inside for robust audio and is layered with a thick and fluffy padding which feels as soft and comfortable. The ultra-wide headband is one of the major factors on why this model seems bigger than its competitors, but we found the combination to be comfortable and lightweight, so using the pair for hours on end will not give you massive headaches. Although, after prolonged use, the headband tends to compress on your head giving a slight biting feel, overall, the Man O’ War is still comfortable, but not on the same level as the Hyper X Clouds.

Razer used the matte black materials you can typically find on their top-end mice like the DeathAdder Elite and Mamba, with a few hints of glossy black along the band, with the Razer name plastered on the top part. The whole thing is mostly made of plastic, but in our books, this helps the product shave off as much weight as possible from the total package. Although adding bits of aluminum or metal will give the Man O’ War the premium touch it exudes, we still think it was wise on Razer’s part to use lightweight materials, despite making the Man O’ War feel a bit cheap and creaky when flexing.

The Razer Man O’ War connects to your PC via robust braided USB cable. You can connect this product to your PC, Xbox One, PS4 and mobile phones, but the 7.1 Surround requires Razer’s driver program Synapse. So for anything other than your Windows PC or Mac, you can only get stereo sound. Volume and mute controls are inline on the braided cord, which is convenient by itself, but we prefer the intelligent placement on the wireless version. The USB end of the cable holds the 7.1 sound card, so you need to connect the angled 3.5mm jack for everything to function. Directly connecting the latter will only result in stereo audio, like most other gaming headsets.

On the side of each can, the mesh design gives an impression that this pair is an open-back headset, but in reality, this is only a design feature which was meant to give the Man O’ War a classy look. The sides of each cup have the Razer logo, but there is no Chroma lighting included. While that isn’t a deal breaker and the feature itself is useless when you have the headset on your head, fans of the beautiful lighting tech might have to look at getting the wireless version instead. 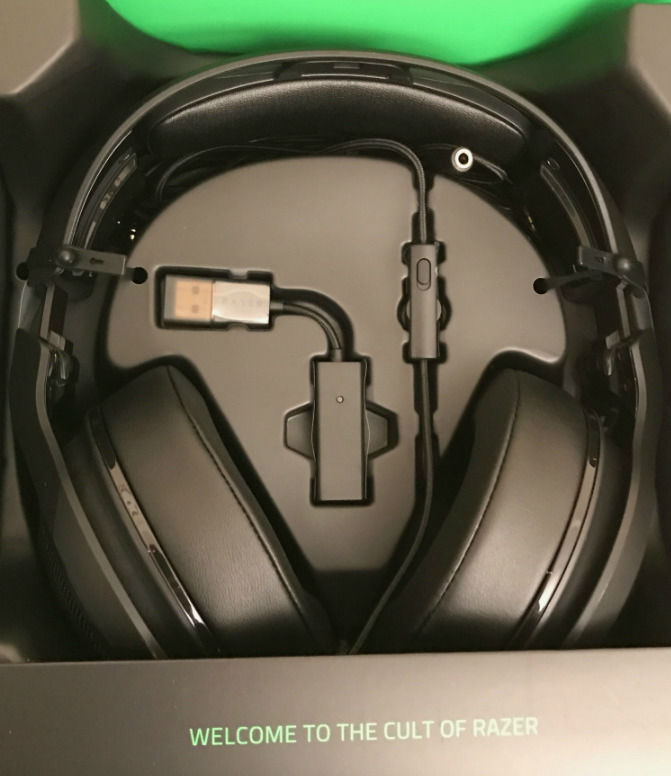 Gaming headsets don’t sound as good as their price tags command, but the Razer Man O’ War is an exception. The soundstage of the 50mm drivers sounds bright, with just the right amount of bass and emphasis on crisp highs and clear mids. This mix might irk bass heads or fans of explosive games like Battlefield 1, but surprisingly, the Man O’ War’s equalizer provides a lot of potentials.

You can tweak each of the three sounds to your liking with distinct increments in improvement, and by doing so, the Man O’ War will sound like a true-blue premium headset. You can tweak settings via the Razer Synapse, which also has a Bass Boost function, or you can create your mix of profiles via other programs with EQ capabilities.

The Directional sound of the Man O’ War is also excellent and accurate, while the soundstage seems broad and consistent from left to right. The audio feels roomy overall, making this headset ideal for titles with big environments like Battlefield 1 since positional audio does provide an advantage especially in close-quarters combat. Meanwhile, the quality of the Man O’ War’s 7.1 surround emulation, is subjective or questionable in our book.

While real surround sound is ideal for the most part, we still think that the Man O’ War’s implementation is still decent, much like the emulators found on other headsets. For the best overall sound, we still mostly use the stereo option to avoid losses in quality. You can, however, select which programs run in 2.0 or virtual 7.1 via Razer Synapse. You can even have two programs running in different implementations at the same time. The level of control Razer provides for the Man O’ War is another fantastic selling point.

Of course, let’s not forget the Man O’ War’s retractable flexible microphone. Voice replication sounds crystal clear according to our gaming friends when we tested this product in one of our BF1 sessions. The mic is also great at avoiding background noise, a prominent problem for the cheap mics on other pairs. The boom mic hides into the left cup smoothly, so you don’t have to deal with loose connections like on worn-out headsets.

In some cases, like on the PS4, the Man O’ War becomes terribly silent, especially if you use the USB connector. By using the latter, you may get weird noises, or the mic will record every bit of sound in your room and feed it back into the ear cups. Your only option is to connect the 3.5mm jack to your controller or your Xbox Stereo Adaptor. But for PC and Mac, as long as you have Synapse installed, the Man O’ War functions as smooth as silk either via the USB dongle or your onboard/discrete sound processor. 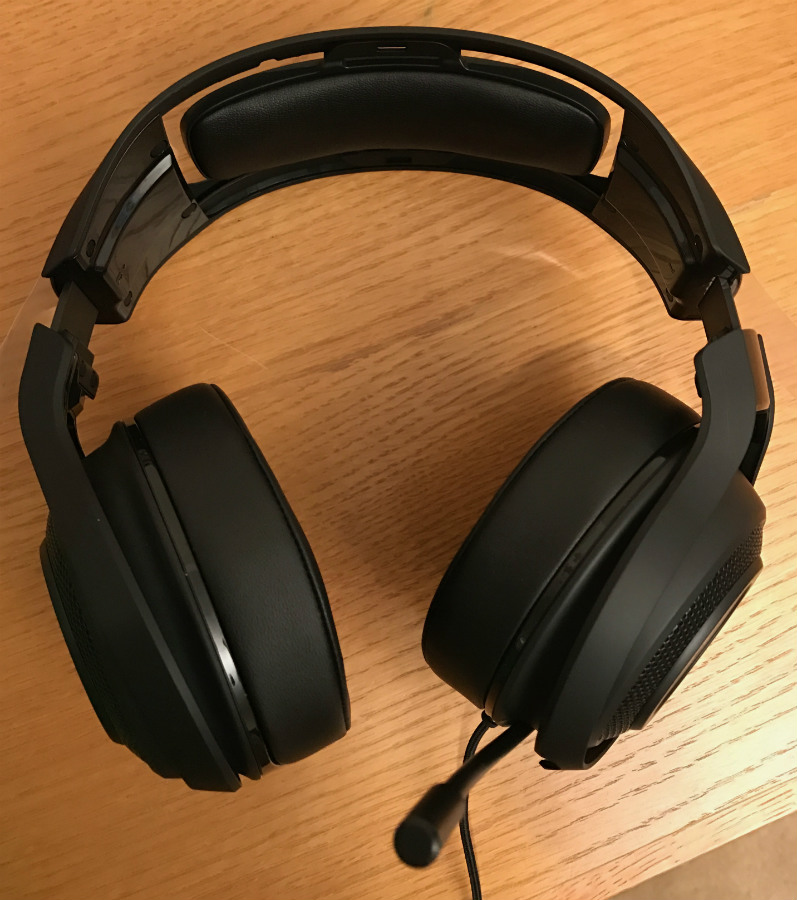 If you are in the market for a wireless gaming headset, the Razer Man O’ War is a fantastic choice you can consider before you spend your hard-earned dough. The sound is superb especially after tweaking since the Man O’ War is responsive to equalizer adjustments, while the 7.1 surround is decent when compared to other emulated pairs. Since the wired Man O’ War is more or less $50 cheaper than the wireless version, it would be difficult to look at other options since the pair now verges on being affordable considering its overall quality. Although the Man O’ War is built with plastic all throughout, the premium texture and the attractive matte black goes well with the enormous size but minimalist look.

However, you do miss some of Razer’s selling points on this iteration. You don’t get the wireless function, and its excellent range and battery life found on the premium version, plus you don’t get Chroma lighting as well. You also don’t get to experience the control layout of the wireless variant which we think easily makes that Man O’ War one of the best gaming headsets available. If you can swallow the premium of the wireless version, we suggest you go for that product, but if you want to save the extra cash and just want an excellent performing headset plus live with its limitations, then the Man O’ War wireless version is a fantastic pick for your gaming audio needs.