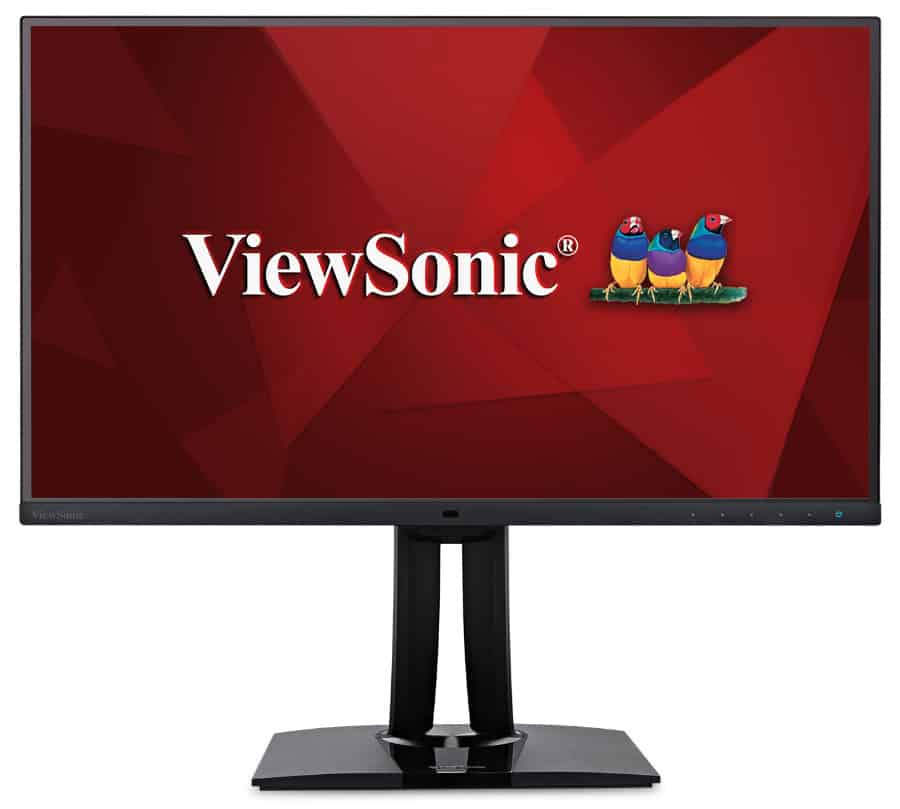 The ViewSonic VP2785-4K is the latest addition to the brand’s impressive portfolio of superb performing designer monitors. This model promises fantastic panel uniformity and compatibility with HDR10 content which if true, makes this device quite future-proof. The ViewSonic VP2785-4K and its impressive specs are promising for the editing crowd, but it’s more interesting if this affordably-priced monitor can take down its more expensive competition. 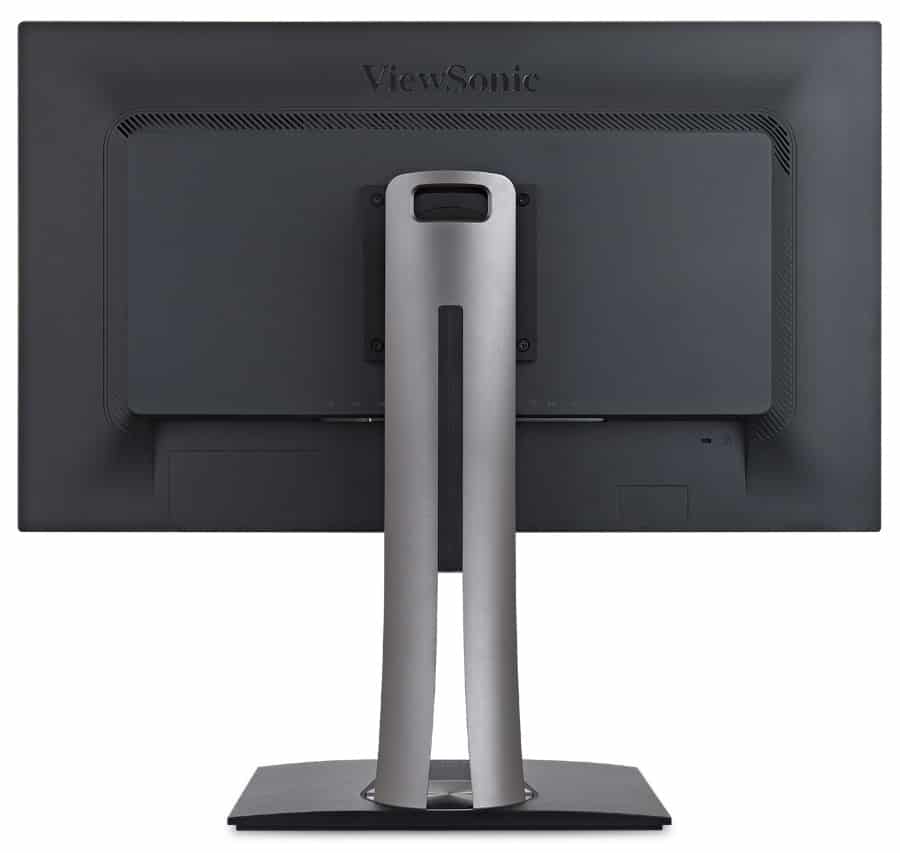 The ViewSonic VP2785-4K adopts the VP line’s 2017 appearance that includes drastic improvements in aesthetics and ergonomic functionality when compared to the VP2772. This latest iteration only has thin panel borders for a seamless view even if you configure multiple units into an array. Most of the device comes in matte black, but the glossy and gunmetal accents used in previous models are also present to give the ViewSonic VP2785-4K some premium flair.

The physical difference of the ViewSonic VP2785-4K from its predecessors is the back panel which apexes into a rectangle in the middle instead of a curving bulge. This aspect allows users to flush or wall mount this device conveniently and firmly for a more stable setup. The I/O panel is neatly tucked under this part, with connectors in a down-firing position for easy cable management.

The device has a commercial, all-work vibe, but ViewSonic’s professional monitor design always had a bit of grace to it. Build quality is on the superb side since the ViewSonic VP2785-4K feels quite durable despite being lightweight. We also didn’t find any creases or uneven seams on the monitor’s plastics, indicating that the QC process is quite good.

The ViewSonic VP2785-4K’s connectivity layout includes DisplayPort 1.2 and Mini DP 1.2 as primary video input, but you can also utilize the two HDMI 2.0 slots which are HDCP 2.2 compliant for 4K streaming. There is also three USB 3.1 Type A receptacles and a single Type B for accessories, but the most interesting is the USB Type-C port. ViewSonic advertises that the latter is capable of both signal and power transfer for laptop docking.

The latter serves dual purposes for the ViewSonic VP2785-4K’s users to enhance the usability of the display. The USB-C port provides 85 watts of power for laptops, while it also serves as an input for the monitor’s KVM feature. You can use this monitor to provide display output for two computers, but the other unit is required to utilize the USB-C port.

The VP line’s attractive stand that has a gently curving upright is also included in the package. The mechanism provides height, tilt, swivel, and pivot adjustments for your convenience, making the ViewSonic VP2785-4K ideal for varying anthropometrics. If in case you would prefer aftermarket solutions, you can entirely remove the included stand and opt for aftermarket solutions with a 100 x 100 bolt pattern.

The ViewSonic VP2785-4K sports a 27-inch IPS panel with a 3840 x 2160 resolution, 60Hz refresh rate, 12ms response time which immediately makes it apparent that this device is strictly for photo editing and content creation. The company tags this model to provide more vibrant colors and accurate shades via its 10-bit interface with a 14-bit LUT which includes comprehensive gamut coverage of several standards such as 99% Adobe RGB and 98% DCI-P3.

The first quality you will notice with the ViewSonic VP2785-4K other than its fantastic colors is the extra sharp and crisp screen. The 111 PPI pixel density brought about by 4K squeezed into a 27-inch display is a sight to behold. This form factor is great for graphic content, but it can make reading difficult for users with anything other than 20/20 vision.

The ViewSonic VP2785-4K is indeed an excellent prosumer monitor especially when you consider its price. The device can produce 100% sRGB, 99% Adobe RGB, and 96% DCI-P3 with a collective accuracy of around Delta E 1.5. Only the DCI-P3 space missed a bit of volume, but we think ViewSonic’s factory calibration for these filters is more than just spot-on.

The ViewSonic VP2785-4K is great for color-grading, especially since there is still room for tightening the accuracies of the color spaces. Buying a colorimeter for this sole purpose is worth it this time to keep the monitor’s display on its toes. Choosing this model will leave you with a considerable amount to get a decent model like the Spyder Elite V if you compare it to similar offerings from other brands.

Contrast hits a high 990:1 for the ViewSonic VP2785-4K which is an excellent score, although it’s notable that it still falls a bit short compared to a few models we tested. Black luminance is relatively good while gamma sits perfectly at 2.2, but the screen can still look grayish at times in low-lit environments.

Panel uniformity is also on the positive side for the test unit since deviations do not exceed 10% in brightness. Colors also looked reasonably balanced across the screen, with a very limited Delta E of 2.6 from the D65 standard. Users will be hard-pressed to catch variance issues on the ViewSonic VP2785-4K, but this could change between unit to unit.

One thing the ViewSonic VP2785-4K doesn’t handle well is motion due to its slow pixel response time. The 12ms specification comes into play even when playing slow-paced titles, giving birth to ghosting and smudging if you swipe the crosshair. Story-based games are still a joy to play since the screen is extra vibrant, but this model is only suitable for casual enjoyment on the side.

It’s also a significant factor that the ViewSonic VP2785-4K does not support adaptive sync solutions from both brands. You are going to need an RTX 2080 or higher to keep frames stable at 60FPS on maxed out graphics settings.

However, we love that the ViewSonic VP2785-4K managed to keep latency low despite its bias towards editing. Input lag is limited to 11ms, so there will be no delays between the screen and your inputs.

Thoughts on the ViewSonic VP2785-4K

The ViewSonic VP2785-4K is an excellent display for content creation and editing thanks to its excellent image quality out of the box. The firm did an excellent job in tuning this monitor for professionals while the calibration headroom will surely make purists very happy. The design and build quality add tremendous value to an already great product.

There are minor flaws, but we think they are insignificant if you experience the benefits of the monitor. The only we would like to see is a bit of gaming pedigree as a freebie, but that’s too much too ask for a prosumer display. The ViewSonic VP2785-4K is an excellent choice for photographers and content creators, but what’s best about it is its more than reasonable price tag thats easier to live with.