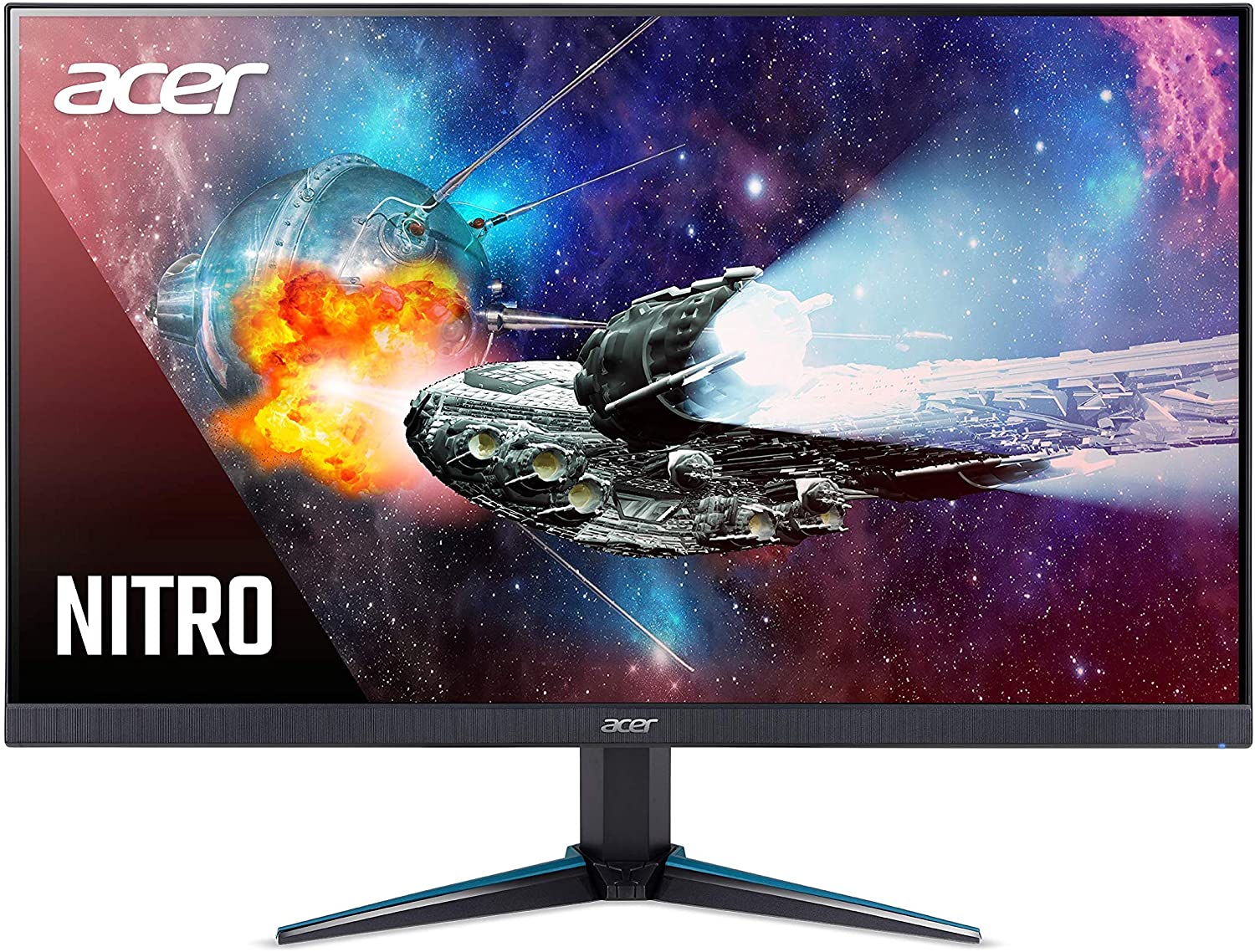 The Acer VG280K is an enticing budget option for gamers who want a crisp and vibrant screen for both PC and next-gen consoles. The monitor belongs to the Nitro line which encompasses value without compromising its performance. Let’s check out if it’s a worthy alternative to monitors like the Asus VG289Q that will satisfy your cravings compared to expensive TVs. 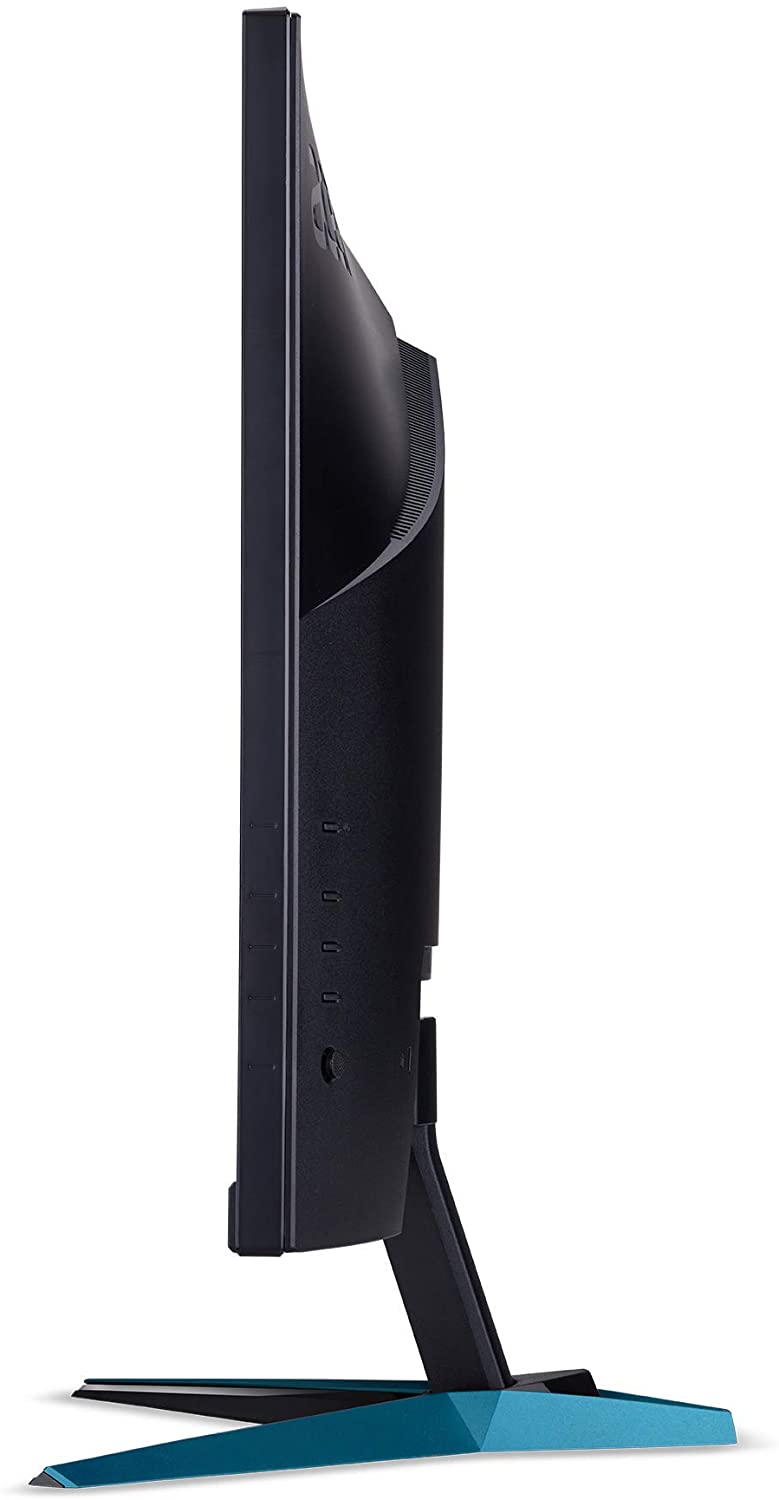 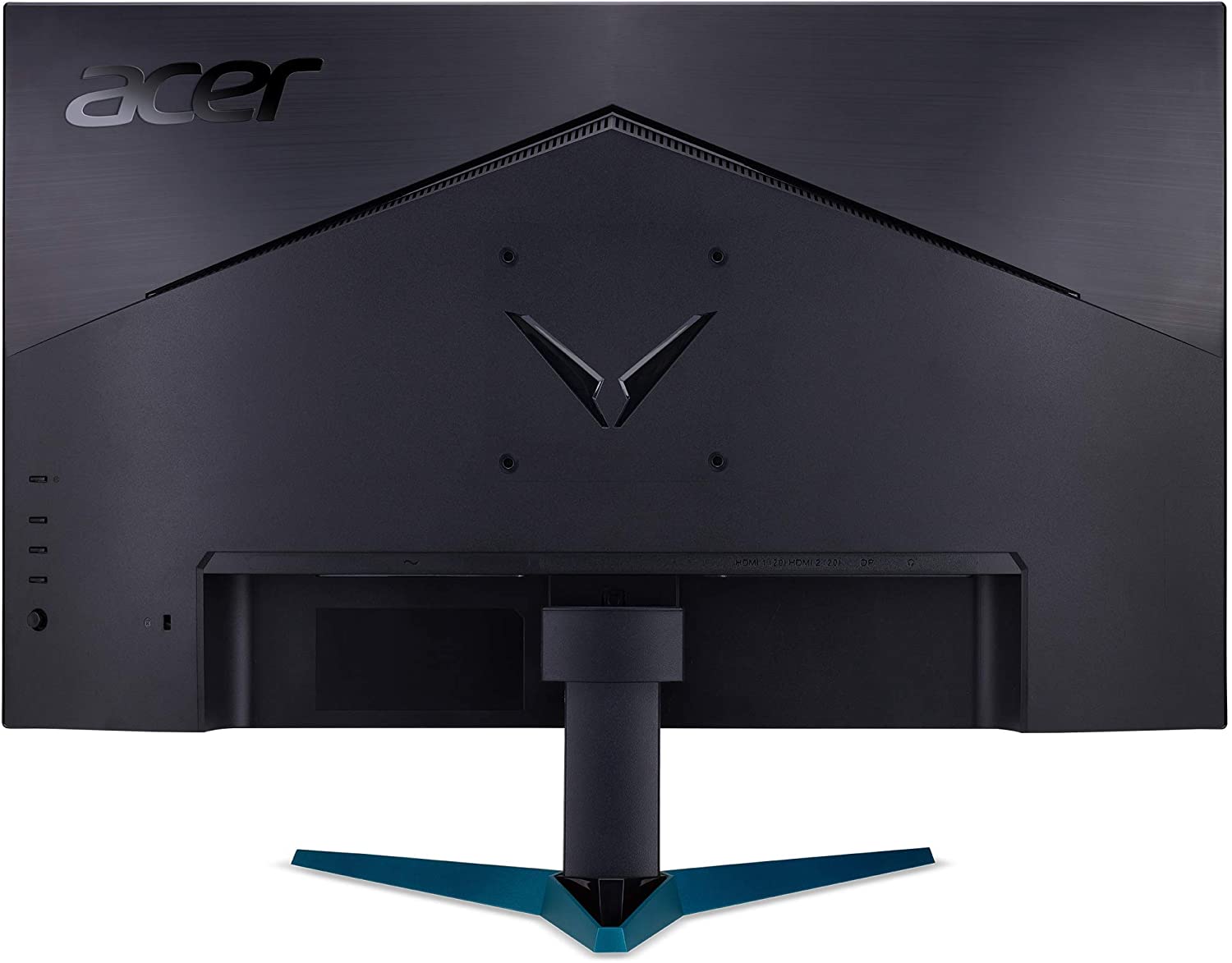 The Acer VG280K follows the original Nitro gaming monitor aesthetic, but its accent color is cerulean blue instead of the usual red. The rest of the monitor, however, is still finished in matte black which is cleaner-looking and easier to maintain. The display is bezel-free on three sides, but you will still see inner borders when it’s in use. 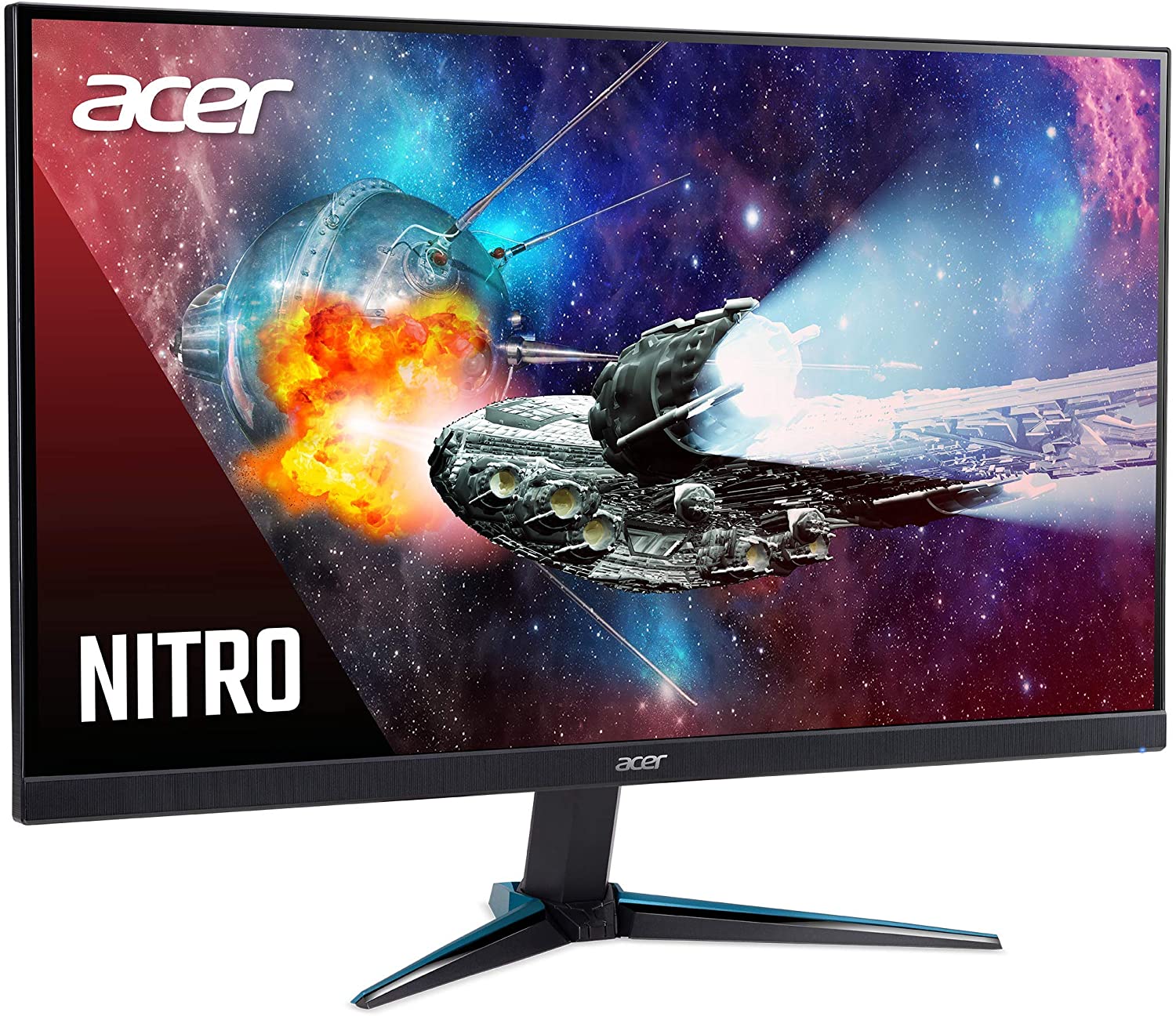 28-inch monitors are not that big nowadays, but the Acer VG280K is a little bigger in some angles compared to its competitors. It needs almost ten inches of depth, and its cabinet isn’t the thinnest in its class. However, that doesn’t affect its performance and it still manages to look good overall.

Build quality for the Acer VG280K is great since the plastics used do not flex and there are no cosmetic defects.  The stand doesn’t wobble too much, but our main complaint about it feels a bit too low even for regular-sized users. It’s also noteworthy that the monitor doesn’t include a DisplayPort cable, so make sure you account for that when buying it.

The Acer VG280K has the standard OSD joystick for your convenience in adjusting its numerous settings. It’s a bit stiff, but it’s still easier and quicker to use compared to button layouts which you can find on other budget monitors. It comes in handy for the product since Acer is quite known for having more options in the menus compared to its main competitors

The stand include with the Acer VG280K only offers tilt and it sits quite low for a monitor of this size. It would be nice to at least have height adjustments that would enable users to adjust the view according to their height. You can swap this out with a VESA mount which is considerably better, but that adds more cost to your upgrade.

Connectivity for the Acer VG280K is fairly standard for PC gaming monitor plus gaming consoles like the PS5. The layout at the rear includes DisplayPort 1.2 and two HDMI 2.0 ports, plus a 3.5mm jack for headphones. There are no extras like USB slots, but that’s understandable since this model is intended for the budget-conscious.

At least you get speakers with the Acer VG280K as secondaries for daily use such as conference calls or even background music. They aren’t powerful enough for games and movies, but it’s always nice to have a backup. Just don’t turn them all the way up since they will start to distort once you’ve gone beyond 50%  of the volume.

The Acer VG280K sports a 28-inch IPS panel with a 3840 x 2160 resolution, a 60Hz refresh rate, and a 4ms response time. The backlight is rated at 300 cd/m2 while the contrast ratio is still at 1000:1 like most IPS panels. This model doesn’t advertise special features like HDR since it is a budget model, although 4K still isn’t budget-friendly nowadays.

4K at 28 inches looks excellently crisp and detailed so monitors like the Acer VG280K are great for games and movies. However, they may be too sharp for productivity use, so some users might need to use scaling to make text legible again. We recommend going with a 32-inch 4K monitor instead if you are going to use 4K monitors for work if you have sensitive eyes.

The Acer VG280K covers 100% of the sRGB gamut and around 94% of DCI-P3 which makes colors extra punchy and rich. The default accuracy has a deltaE average of 1.34, so most users won’t need to calibrate right away. The screen’s gamma and color temperature are slightly off from the ideal points, but we don’t think it will be noticeable while gaming.

Calibrating the Acer VG280K isn’t worth it since the dE average only improved to 1.12 which will not be noticeable for regular use. Most users will be able to get away with minor tweaks to balance out the screen. Colorimeters aren’t cheap after all, so it might be better to get a high-end monitor instead.

The backlight on the Acer VG280K can reach 390 cd/m2, but its contrast maxed out at 1005:1 at 50% brightness. It can fight glare in well-lit rooms, but it can look washed out especially in dark scenes when it’s used at night. This performance is consistent with various IPS panels, so we recommend getting a VA monitor instead if you wish to avoid it.

Panel uniformity for the Acer VG280K is decent, but there are some light leaks at the top corners of the sample. The flaws created visible clouding in dark or all-black scenes, but it’s not as noticeable when viewing full-colored images. Take note that this aspect varies between every unit, so there are better specimens out there with cleaner screens.

Pixel response time for the Acer VG280K is great since it’s not prone to blurring or ghosting even if it’s a 60Hz monitor. you will still see some persistence, but it’s not as noticeable compared to other 60Hz-limited screens, especially those using VA monitors. Setting the overdrive to its “Normal” setting helps, but the “Extreme” level is unusable since it adds overshoot.

The Acer VG280K is compatible with both FreeSync and G-Sync so you can enjoy VRR no matter which GPU you have. Both AMD and Nvidia have great 4K cards at the moment, while Adaptive-Sync for consoles is continuously growing. Input lag sits at 6ms at 60Hz, so it’s a reasonably fast gaming monitor that will not show delays.

Thoughts on the Acer VG280K

The Acer VG280K is a great value option if you want a vibrant 4K screen for PC and next-gen console gaming. Its IPS panel offers wide gamut coverage and superb accuracy out of the box, so it will be ready to go once you plug it in. it also offers the essentials such as FreeSync/G-Sync compatibility, so you only lose out on creature comforts if you don’t want to spend more.

However, you need to consider the biggest downsides of the Acer VG280K aside from its low contrast which is normal for IPS monitors. Our biggest complaint is its stand which sits too low, so you might need to use a book or two to prop it up or spend more on a VESA mount. It’s an excellent budget option, but make sure that you can live with its limitations.

Search
NEW
POPULAR
You are here: Home / Reviews / Acer VG280K Review – Affordable 4K IPS Monitor for PC and Console Gaming
This website uses cookies to improve your experience. We'll assume you're ok with this, but you can opt-out if you wish.Accept Read More
Privacy & Cookies Policy
Necessary Always Enabled
Share This