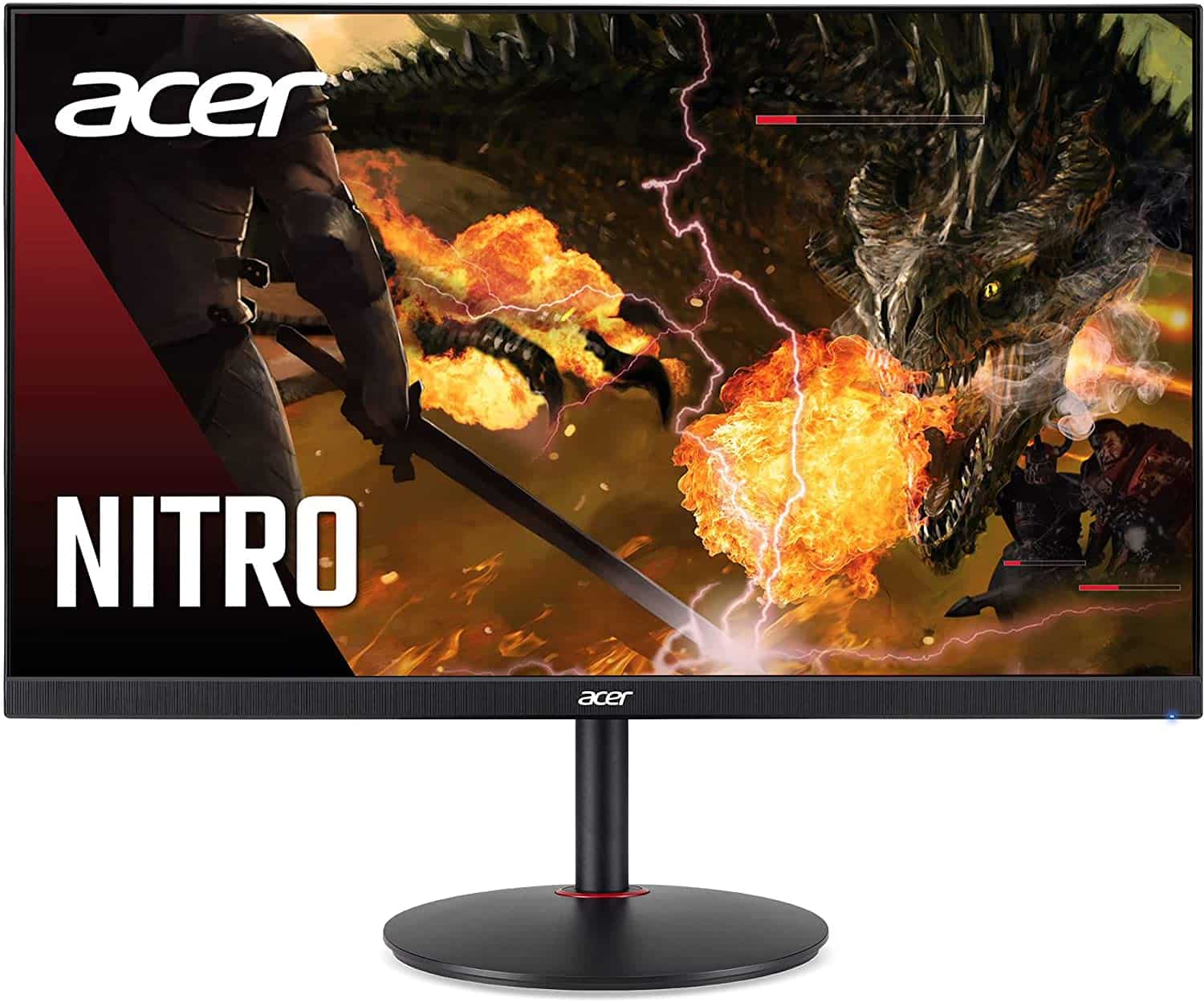 The Acer XV252Q F is a lightning-fast gaming monitor with a 390Hz refresh rate and a beyond reasonable price point. It is worth mentioning that the original 360Hz model is more expensive at this point, even if they don’t have the ability to overclock the panel and get 30Hz more. The Acer XV252Q F is a no-brainer if you are a competitive gamer, but let’s check its performance numbers out before you pull the trigger. 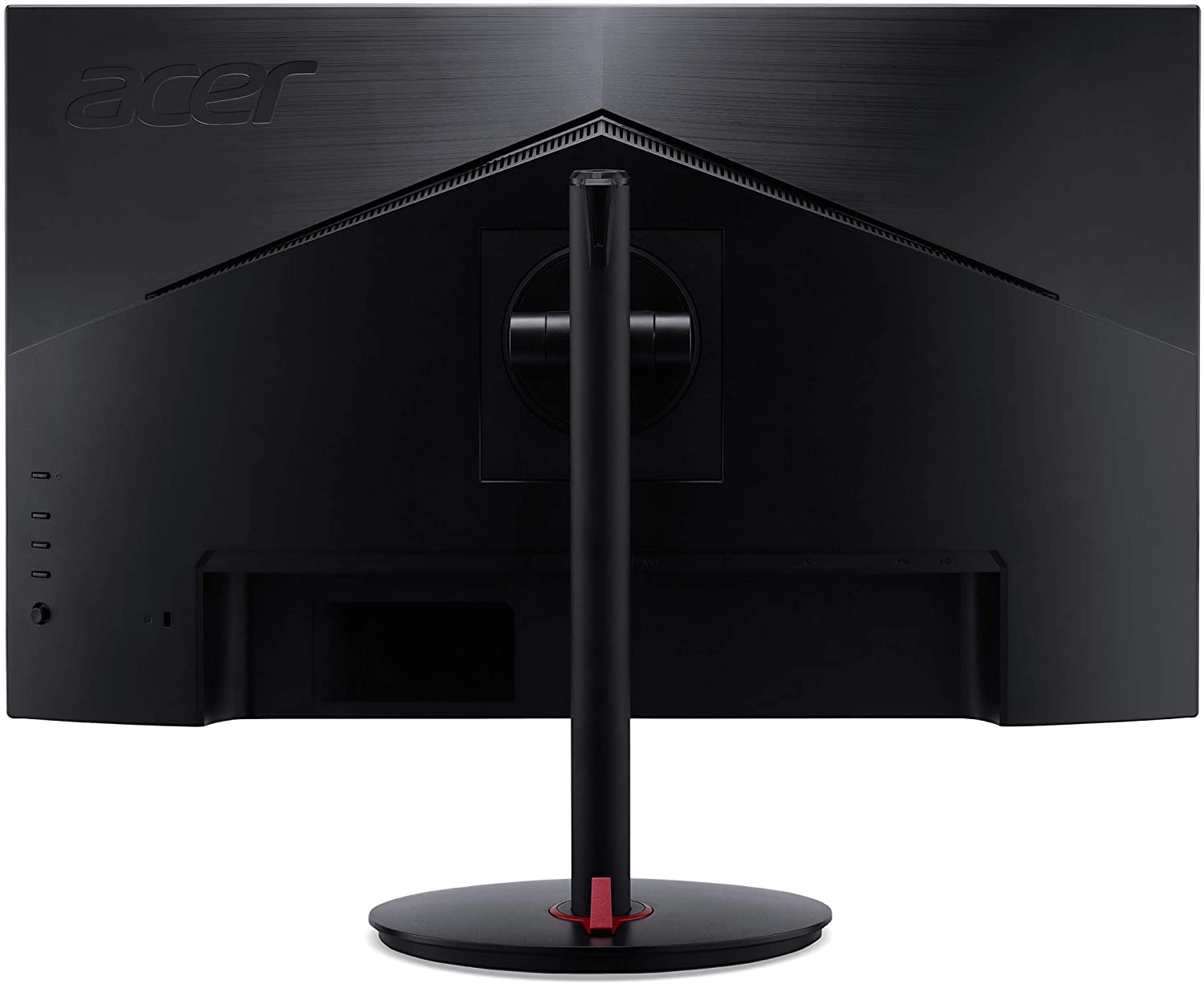 The Acer XV252Q F sports the Nitro monitor aesthetic, which we think should be updated since it has been re-used a lot. It has a matte black chassis with a discrete red ring at the base so it won’t clash with gaming setups and even workstations. The display is bezel-free on three sides, but you still get inner borders when it’s in use.

The device is no bigger than most office monitors, so the majority of its users shouldn’t have trouble with it while setting it up. It needs more than nine inches of depth due to its circular base, but that’s also why we want a redesign. It’s also lightweight, so it is portable and can easily be moved around if you rearrange your setup often. 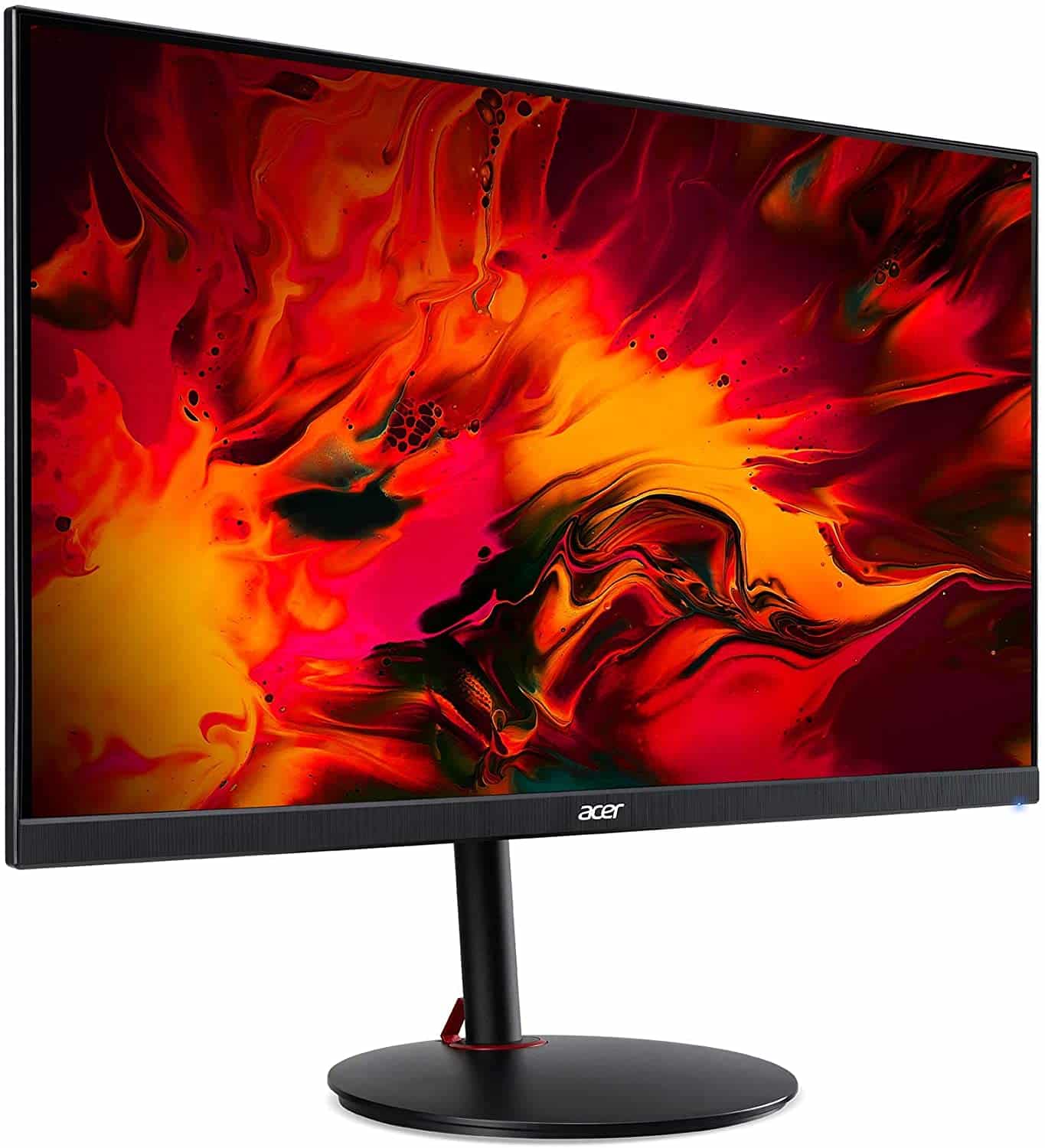 Build quality for the Acer XV252Q F is great even if it is considered as a budget model versus its Predator alternatives. It’s mostly made out of plastic, but there are no flaws, and it doesn’t seem like the panels will flex or crack easily. The stand has a firm grip on the monitor so that it will retain your preferred angle without any wobbling.

The Acer XV252Q F also uses an OSD joystick like the other Nitro monitors that were released before it. It’s located at the back, but it is still within reach for most users. Other budget monitors still use buttons for the OSD, but many of the top brands are already implementing this more convenient design.

The Acer XV252Q F’s stand offers tilt, swivel, pivot, and height adjustment for your convenience. It’s easy to get a comfortable viewing angle, and it’s great that the mechanism is firm enough to hold your preferred screen position almost permanently. You can swap this part out with a VESA mount, but it’s only necessary if space is limited or if you have multiple displays.

It doesn’t have many extras when it comes to connectivity, but that’s understandable if you consider the monitor’s price. You do get DisplayPort 1.4 and two HDMI 2.0 ports for video inputs, along with a 3.5mm port for headphones and speakers. Note that you need to use the DP 1.4 slot to run the 390Hz refresh rate on this model.

The Acer XV252Q F also has a pair of 2-watt speakers, but they sound tinny and are without any semblance of bass. Gamers almost always prefer headsets so that they will get little use in most cases. However, the rise in popularity of remote work setups can utilize them for conference calls or even background music.

The Acer XV252Q F sports a 25-inch Fast IPS panel with a 1920 x 1080 resolution, a 390Hz refresh rate, and a 1ms boosted response time. The backlight has a 400 cd/m2 output while the contrast ratio is at 1000:1 like most IPS panels. Its DisplayHDR 400-certified, but it is all limited when it comes to improvements in detail and contrast.

Most users won’t struggle to adjust with this monitor since 1080p variants are quite common, and many of us are used to them. It doesn’t offer extra space or sharpness like 1440p or 4K, but visibility and legibility are excellent. It is also easier to get high framerates with it, provided that you have a powerful CPU and GPU combo in your PC.

The Acer XV252Q F renders 99% sRGB and around 78% DCI-P3, which are reasonable results for an E-Sports monitor. What’s great about it is its default accuracy with a deltaE average of 1.04, which is rare in this category. The monitor looks like it was factory calibrated, so there is no need to adjust it apart from its default brightness manually.

Calibrating the Acer XV252Q F reduced its dE average to 0.67, which is even better for color-critical work. However, gamers won’t notice the improvements, so getting a colorimeter to squeeze out a result like this isn’t worth it. The screen already looks good, so spending more on a gadget is impractical in this case.

Its backlight peaked at 421 cd/m2 which is plenty for daily use and sufficient for HDR 400’s requirements. Its contrast failed to impress since it only reached 978:1 at 50% brightness. You can’t expect deep blacks and convincing HDR performance from this monitor due to these limitations.

Panel uniformity for the Acer XV252Q F sample was excellent since there were no visible backlight leaks or clouding issues on its quadrants. There is some deviance in the backlight’s spread, but it was only detectable if the device was scrutinized by a colorimeter. Note that this could vary between monitors due to the nature of IPS panels and some manufacturing tolerances.

The Acer XV252Q F is capable of excellent motion handling thanks to its lightning-fast response time and refresh rate. The monitor barely shows any blurring or ghosting, so you don’t need to max out its overdrive setting. The 30Hz overclock over the native refresh isn’t a massive upgrade to the 360Hz models, but it does help lower pixel transition times.

This monitor is compatible with FreeSync and G-Sync, so you won’t be stuck with one GPU brand when considering VRR. This is a must-have in today’s market, where video card stocks and pricing are highly volatile. Input lag is under 3ms at 390Hz, making the Acer XV252Q F one of the fastest gaming displays available today.

Thoughts on the Acer XV252Q F

The Acer XV252Q F offers a ton of performance for its price, starting with its top-end 390Hz, which many monitors can’t match. It’s pre-calibrated to enable excellent default accuracy and is practically blur and delay-free. The Nitro aesthetic is aging, but it includes all the functionalities which we think are necessary for smooth ownership.

It has limited flaws, and most of those are associated with IPS technology and HDR 400 certification in general. It’s also killing the market for monitors like the Acer X25 which is limited to 360Hz but more expensive because of its extra features. Overall, it is an excellent buy for competitive gamers who want the fastest gaming monitor available.