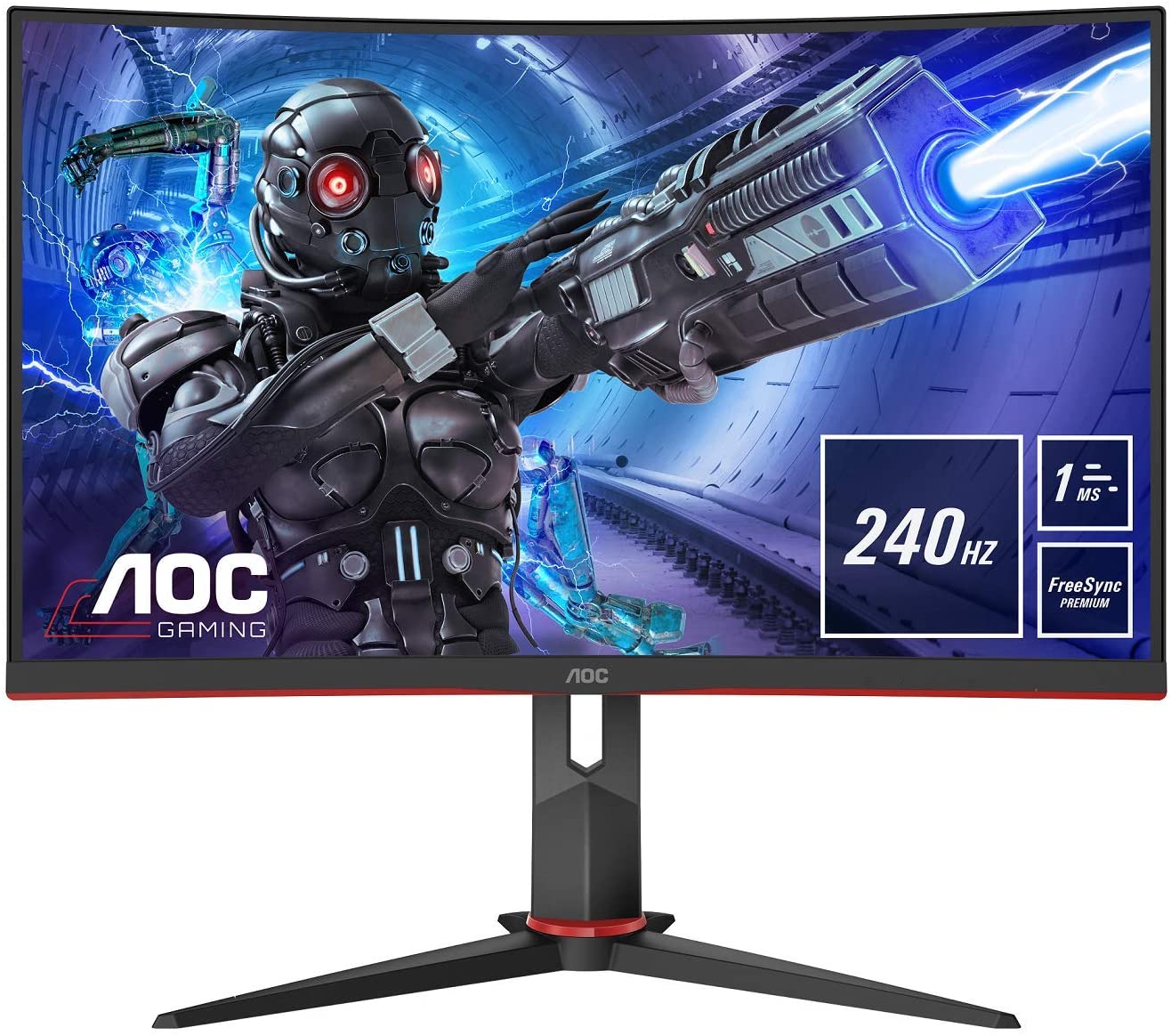 The AOC C32G2ZE is an easy-to-own 240Hz gaming monitor with a large screen, that’s ideal for competitive and console gaming. its obvious caveat is its 1080p resolution which is too low for the screen size, but that makes it a perfect choice for couch gaming. The AOC C32G2ZE’s price is more than reasonable for its specs, but what kind of gaming and imaging performance can we expect? 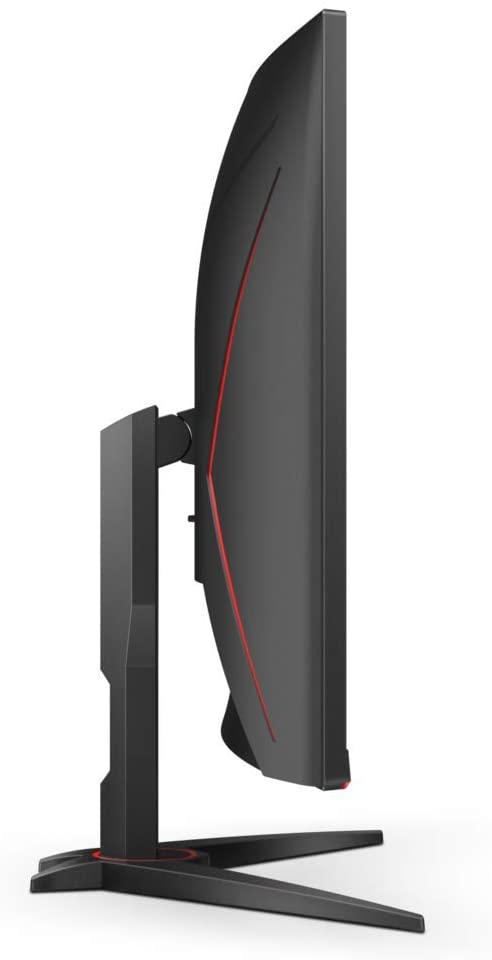 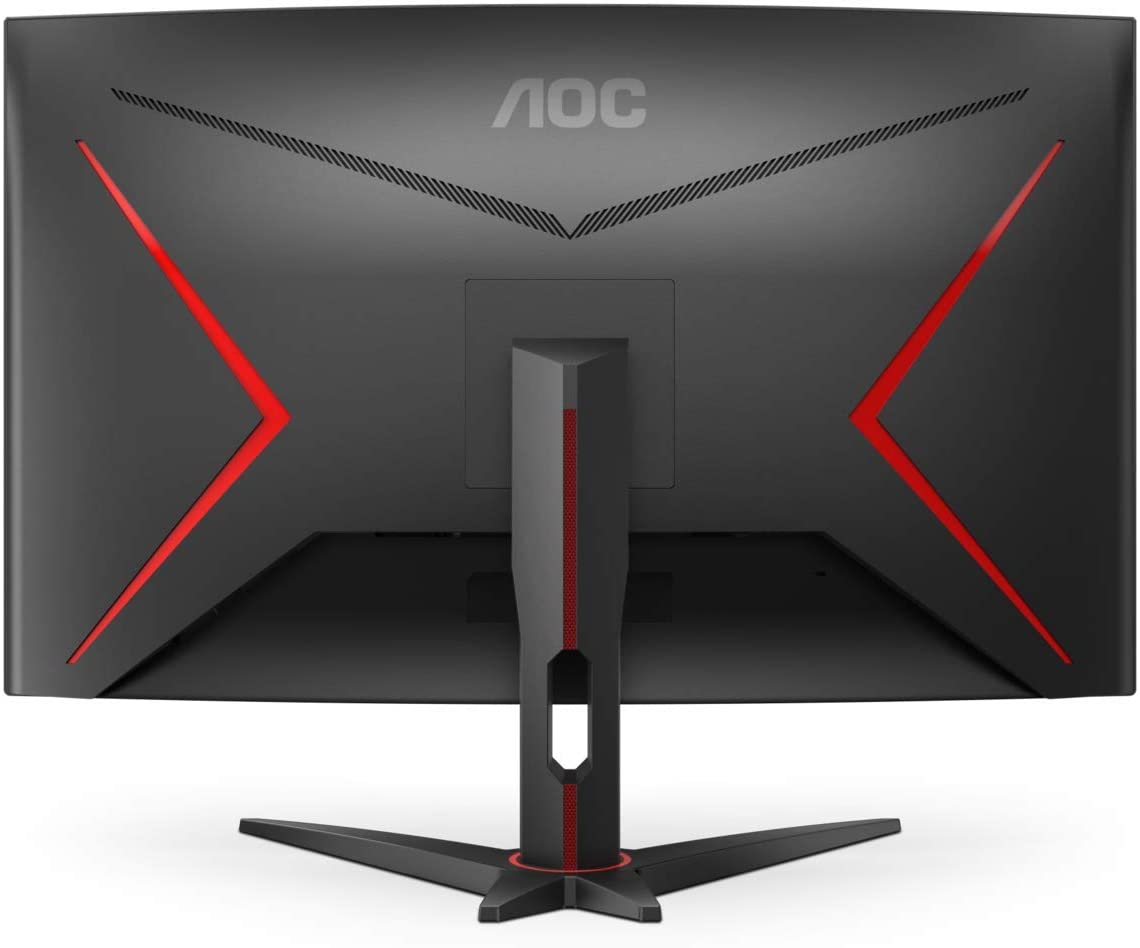 The AOC C32G2ZE follows the simplified aesthetic of the rest of the G2 series monitors such as the AOC 24G2. The monitor has a matte black finish with streaks of red in some discrete locations such as the bottom of the lower bezel. This monitor is frameless on three sides, but you will still see inner borders which are normal for most monitors.

You will instantly notice that the AOC C32G2ZE is indeed a massive monitor once you unbox it, so make sure that you have enough space on your desk first. It is not that heavy at a little over fifteen pounds, but anyone wouldn’t consider it as a portable option. The cabinet isn’t as thick as the curved variants, but it’s not the slimmest monitor we’ve seen on the market.

The AOC C32G2ZE is a lower-priced model, but its build quality doesn’t suffer from the price cuts like the other G2 models. The plastics used are durable and thick, and there are no cosmetic defects on any of the panel’s edges. The stand does wobble a bit, so some might consider replacing it with a VESA option for better stability.

One downside with the AOC C32G2ZE is it still uses OSD buttons instead of a functionally better OSD joystick. Each of the keys has indented labels on the bottom bezel’s face, but they are almost impossible to see in the dark. Most brands already include joysticks on their low-priced monitors, so it’s not an excuse for modern displays, especially those designed for enthusiasts.

The stand included with the AOC C32G2ZE only offers tilt, so some users might feel that the monitor is restrictive. However, it’s quite tall for a 16:9 display, so many users won’t even need to raise the monitor. You can swap this out with a VESA mount, but that adds cost to your upgrade which may offset your other parts in the shopping list.

The AOC C32G2ZE doesn’t have valuable extras like USB ports, but its I/O layout includes DisplayPort 1.2 and two HDMI 2.0 slots that are ideal for next-gen consoles. You need HDMI 2.0 for 120Hz 1080p on the Xbox Series X and PS5, so it’s a big plus that you have two ports for each of them. You also get a 3.5mm jack with the monitor, but that doesn’t get a lot of use since built-in soundcards nowadays offer better performance.

The AOC C32G2ZE doesn’t have speakers, but that’s ok since this is a budget model and most gamers prefer headsets anyway. However, that also means that you need a separate audio system for couch setups which will again add cost if every you have to buy one. It’s no biggie, but having speakers always increases the value per dollar and functionality of a monitor.

The AOC C32G2ZE boasts a 32-inch VA panel with a 1920 x 1080 resolution, a 240Hz refresh rate, and a 1ms boosted response time. The backlight is rated at 300 cd/m2, but the contrast ratio is listed at 4000:1 which is higher than most VA monitors. This model doesn’t have any HDR features, but that’s acceptable since it’s only beneficial if the monitor is equipped with a special backlight that will make it more expensive.

1080p on a 32-inch screen is a stretch since it looks pixelated if you are sitting close to the monitor in a desktop setup. We recommend distancing a bit more from the screen to avoid the low pixel density, or choose it for couch gaming altogether. On the other hand, it is not great for productivity simply because you will tire your eyeballs out trying to take in every inch of space for extended periods.

The AOC C32G2ZE is capable of 100% sRGB and around 91% DCI-P3 coverage, and those are excellent scores for a 240Hz budget monitor. Its default accuracy doesn’t need any help at all since the deltaE average is at 2.18 which is already fantastic for a budget gaming monitor. The screen already looks balanced and ready, so you only have to tweak the backlight to a comfortable level before using it.

Calibrating the AOC C32G2ZE with a colorimeter can push the dE average down to 1.54, but that isn’t necessary for its primary purpose. Some users might need the monitor for editing work, but the cost of a colorimeter isn’t particularly affordable. Most users can get away with a few minor adjustments, so buying something like the SpyderX Pro at a little under $200 isn’t worth it.

The AOC C32G2ZE’s backlight reached as much as 349 cd/m2 at 100% brightness, but that’s too high for regular use. The monitor’s contrast doesn’t reach its specified limit since it only managed 2910:1 at 60% brightness. However, that’s enough to produce deep blacks and richer saturation, so we can’t consider it as a fault this time.

Panel uniformity for the AOC C32G2ZE is decent overall since there are no considerable clouding issues or backlight and color uniformity variances. The top edge of the screen has some minor leaks, but it is only visible when the PC’s black splash screen goes on when booting up. Take note that this aspect varies between every unit due to tolerances, so there are better and worse units out there.

The AOC C32G2ZE’s pixel response time isn’t perfect, so there are times where some smudging or persistence can happen. However, it is easy to correct with the monitor’s Medium overdrive setting in the OSD. This works best in tests, but feel free to use the Strong setting if needed at the expense of some overshoot in 240Hz.

The AOC C32G2ZE is a FreeSync Premium monitor, but it also works with Nvidia’s G-Sync Compatible mode when activated via the Nvidia Control Panel. It is always nice to have the ability to use either VRR technologies since the GPU market is always changing. Input lag at 240Hz is a little over 3ms, so there is no need to worry about de-synced instances or delays while gaming.

Thoughts on the AOC C32G2ZE

The AOC C32G2ZE is a great pick if you are after a large 1080p screen with great color quality and contrast. Its 240Hz refresh rate makes it suitable for competitive gaming, but some might not like the low pixel density of the screen. It is best used for couch or controller gaming since you have to distance yourself a bit to avoid seeing the screen’s pixels.

It does have its limitations such as the tilt-limited stand, but these are expected from monitors that come from lower price brackets. The AOC C32G2ZE is a great buy for PC and console gaming, but make sure that you are aware of what it lacks and are prepared to live and deal with them.

Search
NEW
POPULAR
You are here: Home / Reviews / AOC C32G2ZE Review – Affordable 240Hz 1080p Gaming Monitor for Immersive and Competitive Gaming
This website uses cookies to improve your experience. We'll assume you're ok with this, but you can opt-out if you wish.Accept Read More
Privacy & Cookies Policy
Necessary Always Enabled
Share This