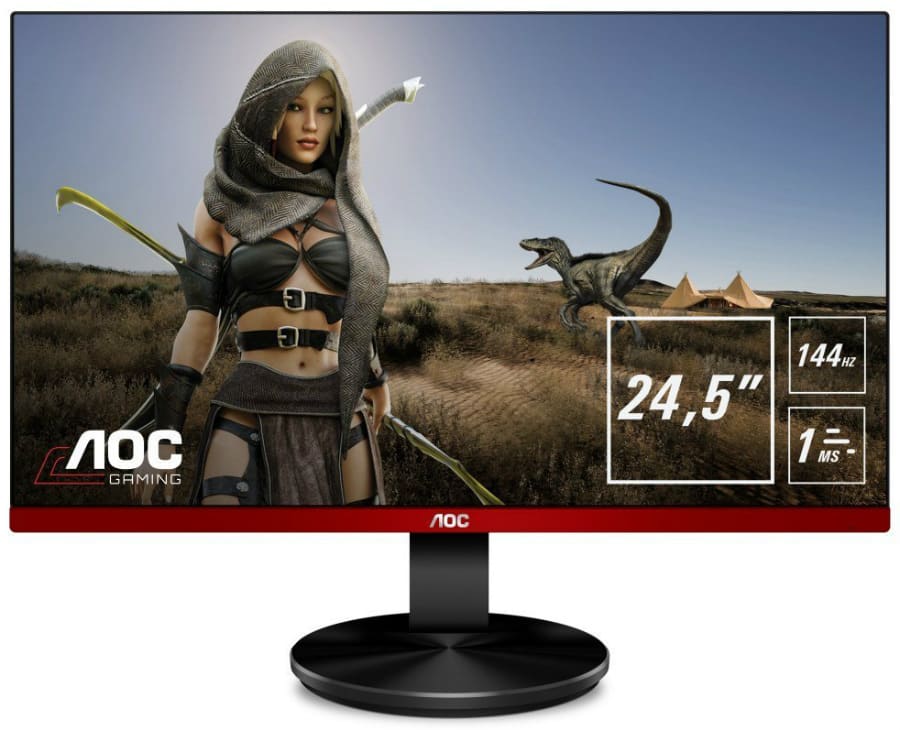 The AOC G2590PX stands to replace the AOC G2460PF which has been our long-standing performance per dollar king in the gaming monitor category. This smaller version of the G2790PX offers smooth and responsive visuals without wreaking havoc on your finances. Let’s check out the sexier AOC G2590PX’s improvements over its predecessor. 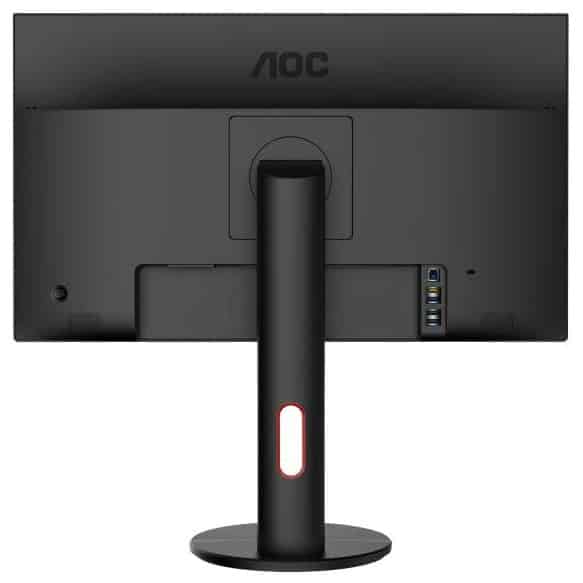 The AOC G2590PX sports a modern aesthetic with a dash of gamer-centric red to keep the appeal of the branding strong. The monitor is bezel-free on three sides, but users will still see thin panel borders when the monitor is in use. The monitor also looks leaner and cleaner than the G2460PF which resembled office monitors rather than its competitors.

We’d love to recommend the AOC G2590PX for gamers who want dual or triple display setups for streaming and surround gaming. The chassis is slim enough to be flush mounted, while the absence of plastic strips on the sides enhances the continuity of the display. We’re not a fan of circular bases, but in total the whole device only consumes less than eight inches and is stable when placed on a desk.

One of our favorite aspects of AOC’s budget gaming monitors is the addition of a complete range of ergonomics. The AOC G2590PX can tilt, swivel, pivot, and adjust the height to help gamers with attaining the best viewing angle. The mechanism is removable via a QD switch which will reveal VESA holes, but for most users, this wouldn’t be a necessity.

The monitor’s connectivity suit will not disappoint since it offers just about every connector users will ever need for daily use. The panel includes DisplayPort 1.2, two HDMI 1.4 slots, and a VGA port for older machines. There is also a USB hub with four slots and a pair of 2-Watt speakers which, as always, aren’t powerful enough to provide the oomph needed for games.

The AOC G2590PX sports a 24.5-inch TN panel with a 1920 x 1080 resolution, 144Hz refresh rate, and 1ms response time. A typical contrast ratio of 1000:1 is specified, but what significantly improved is the WLED backlight’s max brightness which was bumped up to 400cd/m2. This gives users a lot of room to play with when it comes to optimizing the screen for varying conditions.

The AOC G2590PX is surprisingly excellent in image quality when scrutinized with a colorimeter. The sRGB gamut volume reaches a decent 98% which is on par, if not better than the older model and other competitors. Color accuracy could not be maximized beyond DeltaE 3.0 which was a letdown but was mostly forgivable considering the nature of this product.

On the other hand, The AOC G2590PX’s contrast and brightness exceeded our expectations and the brand’s specifications since it can reach 1050:1 and 418cd/m2 respectively. Adjusting the brightness did little to affect the contrast which is rare in the monitors we have tested. When set to around 20% to 40%, the screen can offer satisfyingly deep blacks which can put a lot of high-end monitors to shame.

Playing games like PUBG with the AOC G2590PX felt satisfying and worth more than the price tag. Colors had a decent level of richness without spoiling the natural look of the lush environments of Sanhok. There were a few inconsistencies in some shades, but the display did not appear washed out unlike a lot of 144Hz TN models.

The AOC G2590PX is almost entirely free of blurring and interlacing when operated at 144Hz, but there are few stripes or trails noticeable if you look close enough. Thankfully, the OSD carries an Overdrive feature which can help in cleaning the frames in fast-paced action. We recommend using the Medium setting with Game Mode activated, but take note that the latter will lock out a few options in the OSD.

FreeSync is involved in the AOC G2590PX’s functionalities, giving its users a variable range of 30Hz to 144Hz via its DisplayPort slot. Users can rely on the tech to solve stuttering and tearing in a lot of games. If in case the frames drop too low and the monitor goes out of sync, AMD’s LFC implementation will take effect to mitigate the resulting imaging flaws.

Finally, the AOC G2590PX is an excellent affordable gaming monitor if you are into E-Sports or competitive gaming. The device’s input lag clocks in at only 4ms which will equate to more or less half a frame of delay. When using the monitor, we felt that every input or movement was accurate with no perceivable delays which can ruin your concentration.

Thoughts on the AOC G2590PX

The AOC G2590PX exceeded our expectations and its predecessor’s capabilities in both responsiveness and image quality. The monitor’s swift TN panel puts it close to the fastest premium gaming displays, while its unshakable contrast ratio can put professional offerings to shame. There is room for improvements in color accuracy, but the pros outweigh the cons this time around.

We recommend the AOC G2590PX if you want a competitive gaming display that won’t ransack your savings. We think this variant is a better choice than its bigger brother due to the crisper screen, But take note that the latter has a better calibrated color accuracy score and can provide a more cinematic viewing experience.