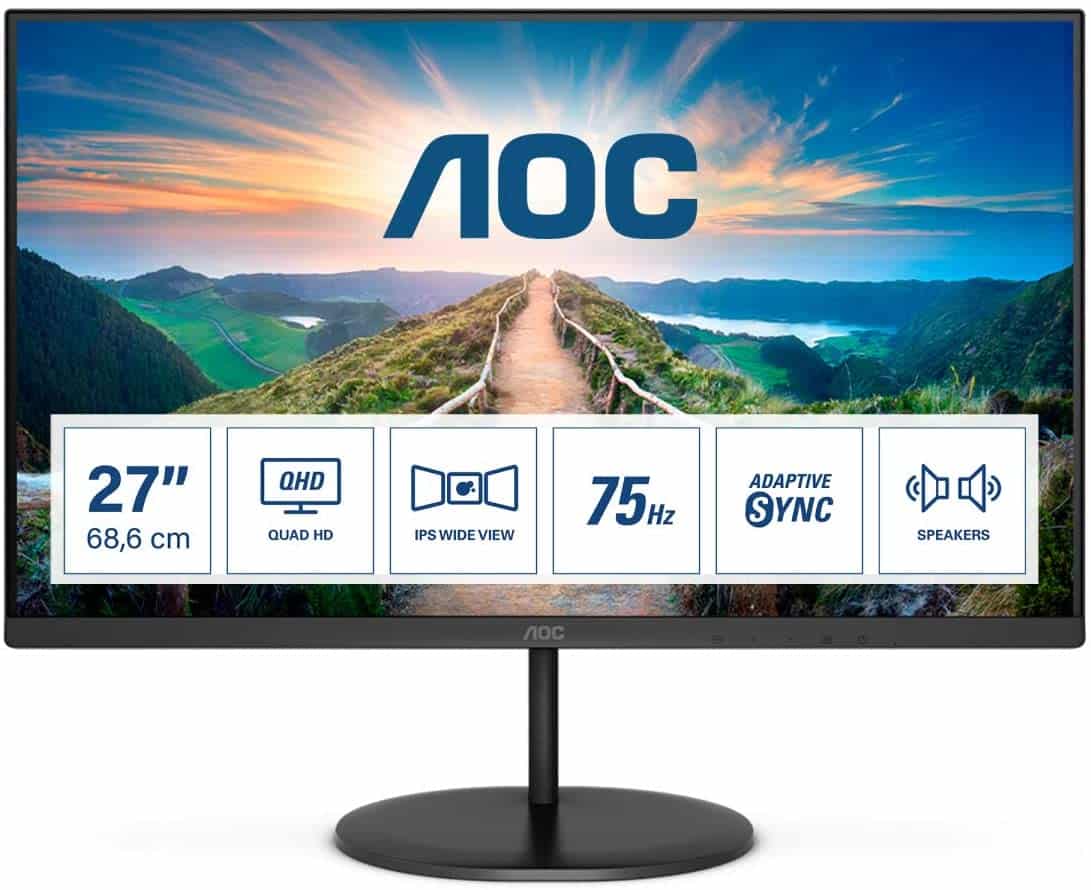 The AOC Q27V4EA is a good-looking but inexpensive monitor designed for a variety of tasks at home or at the office. The monitor offers the essentials in a sleek and sophisticated frame that looks beyond what it costs in the retail market. Let’s check out how the AOC Q27V4EA performs and if it punches above its price bracket. 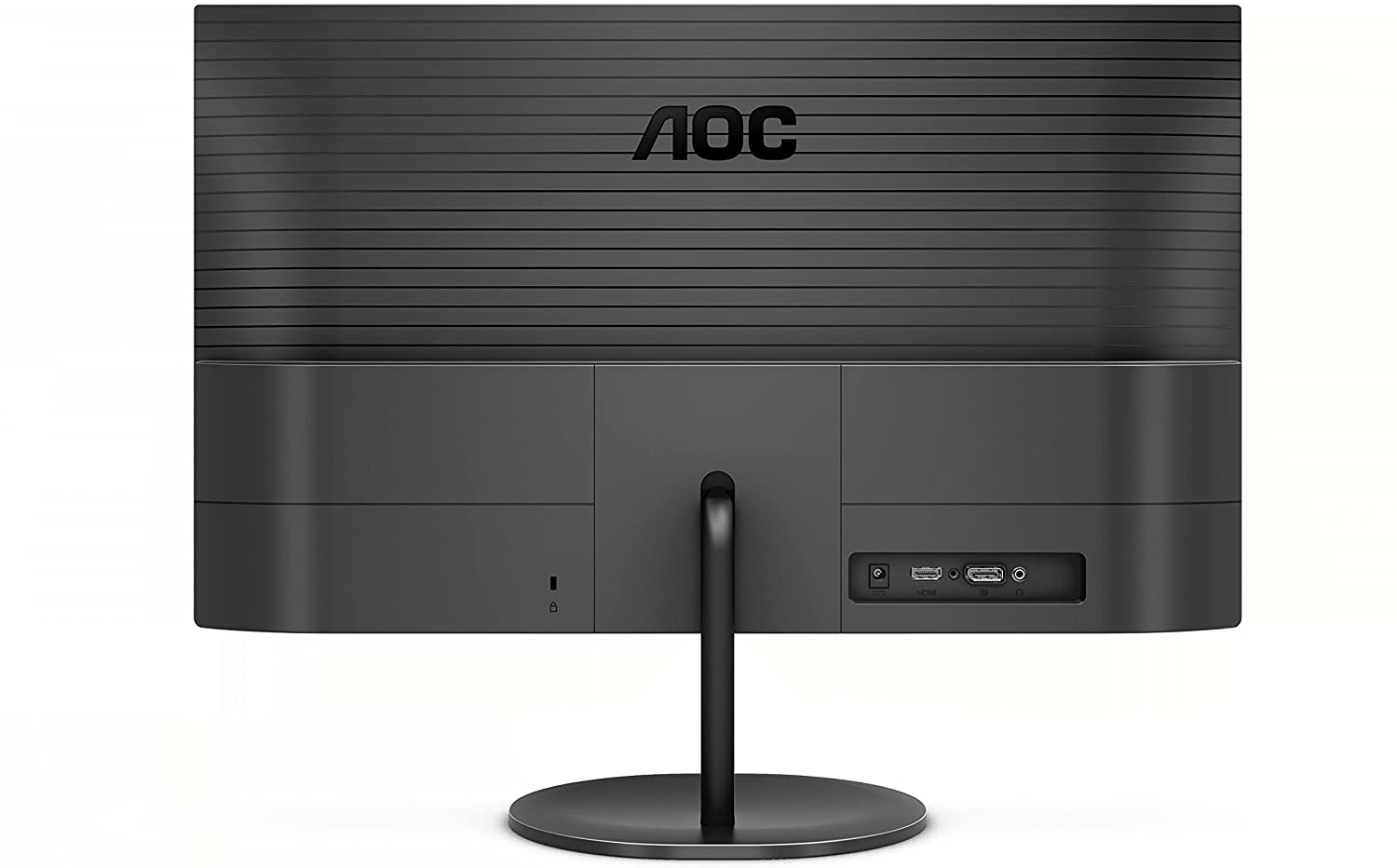 The AOC Q27V4EA has a sleek and sophisticated appeal with its thin stand and plastic housing. It has a matte black finish that will always look clean and new even after a few years since it’s practically scratch-proof. The display is bezel-free, but there still are some minimal borders that we don’t think are distracting while using the display.

It’s larger than most office monitors, but the AOC Q27V4EA should fit right into desks at work or at home. Its base is cumbersome because of the shape, but the device only needs 7.37 inches of depth anyway. It doesn’t weigh a lot as well, so setting up is easy and glass desks can be used for an even more sophisticated-looking setup.

Build quality for the AOC Q27V4EA is decent even if it’s made out of plastic panels which are thick enough to withstand flexing and cracks. The seams match each other perfectly, so there are no crooked edges or gaps on the product. The stand has a slight wobble, but you’ll be ok as long as you don’t nudge it accidentally.

The AOC Q27V4EA has OSD buttons along the bottom bezel that has labels on the trip directly above each key. They are tactile and responsive, but it’s still more tiring and time-consuming to use than joysticks. However, we think this design consideration is forgivable since the monitor is so cheap, although it isn’t impossible for brands to use the other types in the budget range.

The stand included with the AOC Q27V4EA looks great, but it only offers tilt for adjustments. That’s fine in some cases, but you’d want some vertical adjustments as well if in case the display sits too low for you. You can opt for a cheap VESA mount to improve this characteristic, but that still adds cost even if you buy the lowest-priced VESA mount out there.

The connectivity layout is as basic as everything else as well, so you won’t find nifty extras like USB-C. The horizontal-facing layout includes DisplayPort 1.2 and HDMI 1.4 for video along with a 3.5mm analog jack for audio. That’s not a lot by today’s standards, but it will get the job done for its intended audience.

The AOC Q27V4EA even has a pair of down-firing speakers with 2 Watts of power to complete its package. They are useful for background music or conference calls in work-from-home setups, so it’s nice to have them aboard. However, they sound tinny and will distort at higher volume levels so they aren’t ideal for games and movies.

The AOC Q27V4EA offers a 27-inch IPS panel with a 2560 x 1440 resolution, a 75Hz refresh rate, and a 4ms response time. The backlight is rated at 250 cd/m2, while the contrast ratio is listed at 1000:1 like most IPS panels. This model doesn’t emphasize special features like HDR since it is a budget model aimed at casual and business use.

1440p monitors are great for all-around use since they offer more details and sharpness, plus a lot more space to work with. Games look instantly cleaner and better, while productivity gets upgraded since alt-tabbing will be lessened. It’s the current sweet spot in the monitor market, so you can’t go wrong if you pick it over 4K and 1080p.

The AOC Q27V4EA only produced 93% sRGB which is low by today’s standards, but acceptable for daily use. Its default accuracy contrasts that with an excellent deltaE average of only 1.51 which is a score you don’t regularly see on budget monitors. It’s not as vibrant as other offerings, but it costs considerably less than something like the AOC Q27P2Q which is its higher-tiered sibling.

Calibrating the AOC Q27V4EA with a colorimeter produced an even better deltaE average of 1.12. That makes it usable for a bit of editing, but you have to remember its considerable handicap in gamut coverage. It’s also not worth buying a colorimeter for this monitor since the gadget costs around the same if not higher.

The AOC Q27V4EA’s backlight reached 248 cd/m2 which is decent for daily use, enabling the monitor to fight glare and bright lights. Its contrast is limited to 890:1 at 60% brightness, so the monitor is unable to produce deep blacks. This limitation is common on IPS panels except for those with complex treatments like FALD backlights or Quantum Dot tech.

Panel uniformity for the AOC Q27V4EA could also use some improvements since there were backlight leaks on its edges. This produced clouding issues in dark scenes, although the deviances are less noticeable in bright or white backgrounds. Take note that this will vary between every monitor made due to the nature of panels and some manufacturing tolerances.

On the other hand, the AOC Q27V4EA has decent motion handling thanks to its 75Hz and the modernity of today’s IPS panels. You only have to use a moderate amount of overdrive to get rid of the minor persistence and smudging, which to be honest, only happens in contrasting transitions. It’s not an E-Sports monitor, but it is enjoyable for casual and online titles.

The AOC Q27V4EA is compatible with FreeSync, but G-Sync Compatible mode only works if you force it via the Nvidia Control Panel. Its great that you at least have some protection from tearing since 1440p is already taxing on some GPUs.  Input lag sits at 11ms at 75Hz which is the fastest, but still decent enough to avoid letting the user experience delays during use.

Thoughts on the AOC Q27V4EA

The AOC Q27V4EA is a decent choice if you need an affordable monitor for essential use such as office work or as a secondary display. It offers a color-accurate IPS panel with decent motion handling and clarity. It has a sleek and attractive design, but its noticeably lacking the creature comforts we’d like to have for a productivity monitor.

However, the price cut which makes the monitor more attractive is also to blame for the low quality in some aspects. The IPS panel has some weaknesses that many will consider as deal-breakers, plus there’s the very limited feature set. However, that’s acceptable if all you need is an affordable monitor for daily tasks or as a secondary for your workstation or gaming PC.