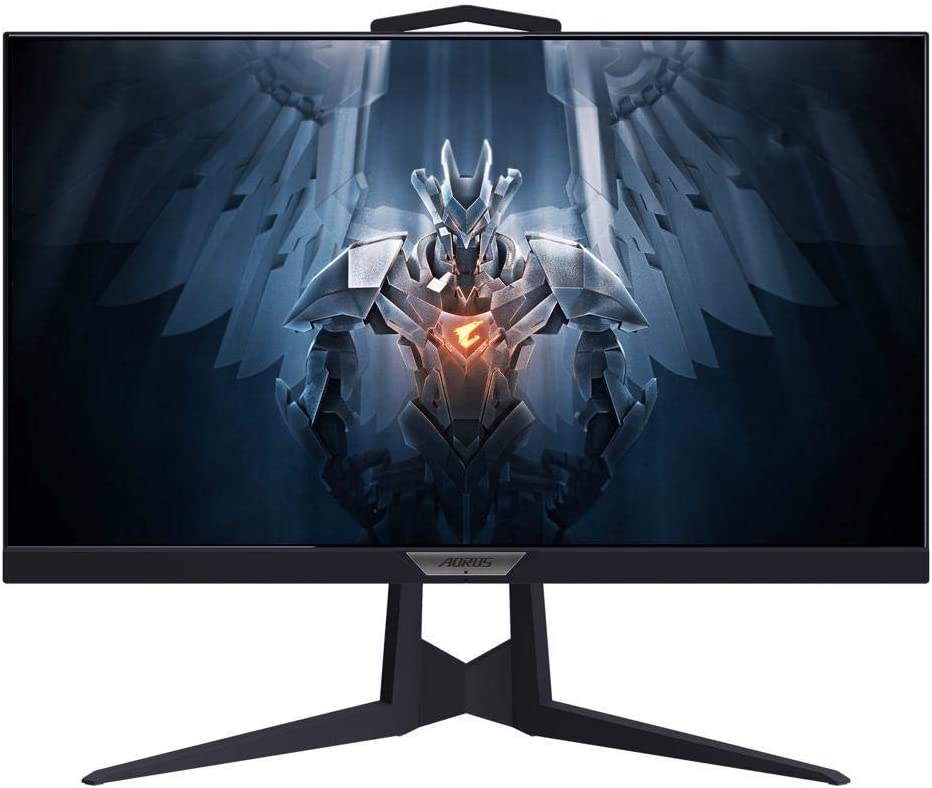 The Aorus FI25F is Gigabyte’s premium representative in the highly volatile fast IPS category which caters to competitive gamers. Gigabyte’s gaming monitors have been impressive so far, but they lack the Aorus touch to help keep the price low. Let’s see if the Aorus FI25F’s added character and features are worth every penny you have to spend. 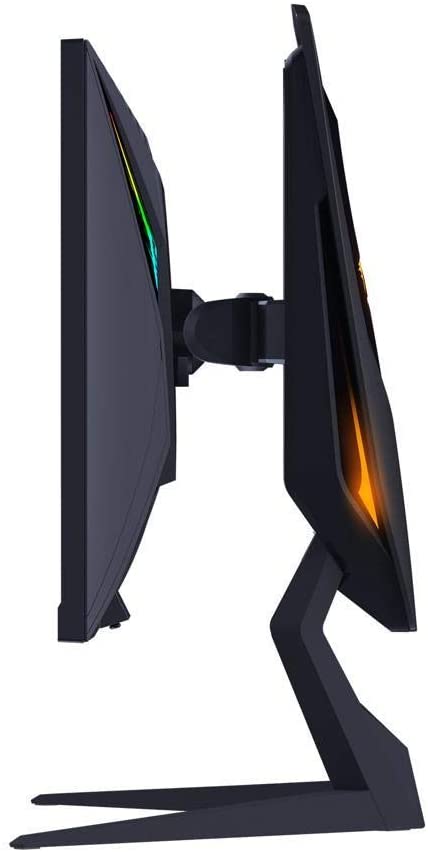 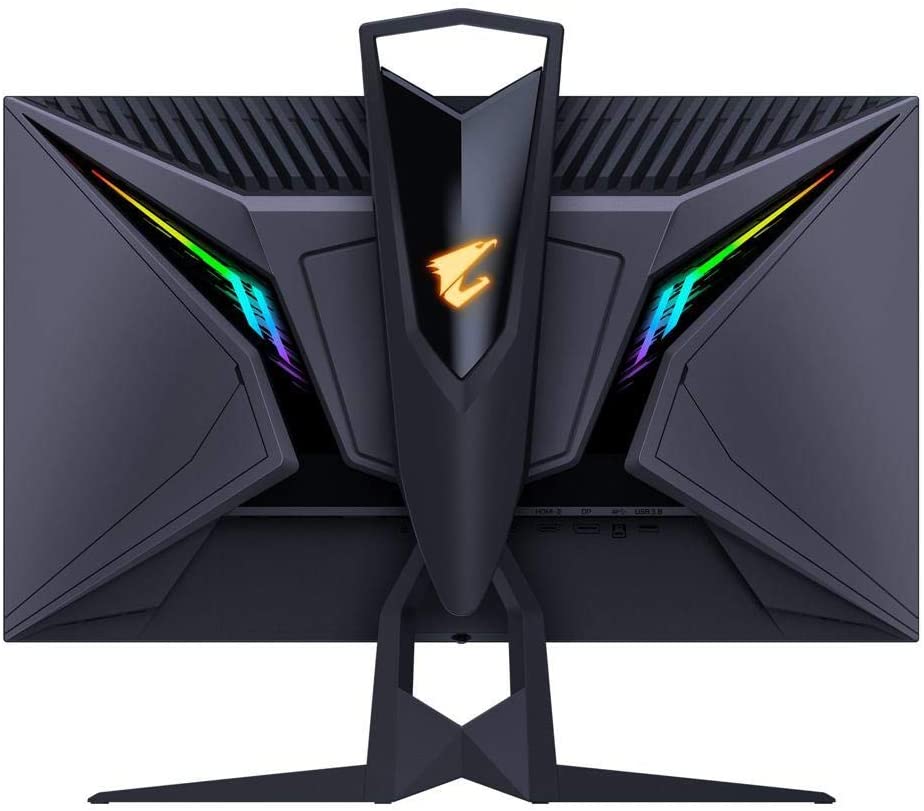 The Aorus FI25F sports a striking aesthetic that we saw on first-generation models like the Aorus AD27QD and the Aorus KD25F. the monitor has a more aggressively shaped chassis compared to the Gigabyte models and a matte black finish that lets the RGB lighting pop out. The screen is bezel-free on three sides, but you will still panel borders when it’s in use.

The Aorus FI25F is bigger than most 25-inch monitors because of how its stand and hinge is designed. You need more than nine inches of depth on your desk, but at least the boomerang-shaped base has some space in the middle for your smaller peripherals. Some may opt for VESA mounting to save space, but that takes out a lot of the monitor’s aesthetic appeal. 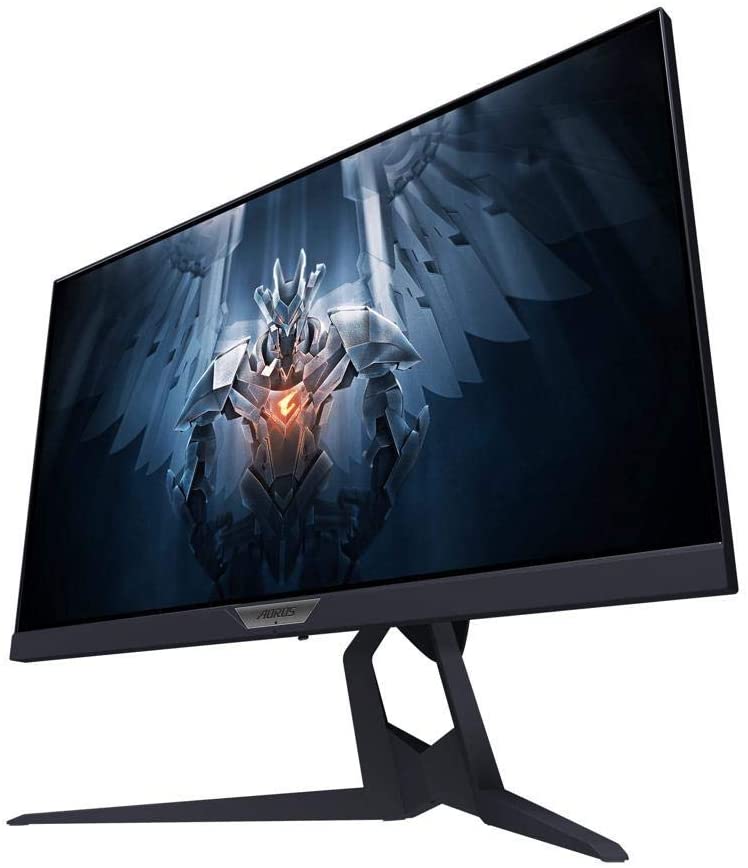 Build quality for the Aorus FI25F is fantastic thanks to its premium nature which means that there are fewer cut corners on the product. The plastics used feel tough and sturdy while the metal stand ensures that it always stands stable no matter what. We didn’t see any uneven lines or unpolished edges on the monitor, so quality control did a pretty good job before this model shipped out.

Another distinct feature of the Aorus FI25F which separates it from the Gigabyte models are its RGB lighting on the stand and the chassis. The glow they produce is enough to cast a gentle bias light as long as your monitor is adjacent to a wall. The monitor syncs with RGB Fusion 2.0, so you can create themed lighting if you also own other Aorus gear in your battle station.

The Aorus FI25F includes an OSD joystick for convenience, but this model is also compatible with Gigabyte’s OSD Sidekick app. You can even configure the Aorus Dashboard feature to show monitoring details such as temperature and fan speeds. It’s one of the best control layout designs we’ve seen, so take the time to master it you can customize and maximize the monitor according to your needs.

The stand included with the Aorus FI25F offers a complete range of ergonomics so users can easily attain a comfortable view angle. You can tilt, swivel, pivot, and adjust the height of the monitor, so practically any orientation is doable and the monitor can be adjusted properly to match your anthropometrics. VESA mounting is possible as well, but we think its only necessary if desk space is limited or if you are building a multi-monitor setup.

The Aorus FI25F’s connectivity layout comes equipped with just about every feature you will need. The layout includes DisplayPort 1.2, two HDMI 2.0 slots, three USB 3.0 slots, and a duo of 3.5mm jacks for audio output and input. Sadly, this model doesn’t have the active noise cancellation feature of the AD27QD which can become useful for serious gaming sessions.

The Aorus FI25F doesn’t have speakers as well, but that’s somewhat understandable since its intended audience will prefer headsets 99% of the time. However, we always love valuable extras on premium models since they have their uses in select cases.

The Aorus FI25F sports a 25-inch IPS panel with a 1920 x 1080 resolution, a 240Hz maximum refresh rate, and a 1ms response time. The backlight has a 400 cd/m2 ceiling while the contrast ratio is listed at 1000:1 like most IPS panels. The monitor is certified for DisplayHDR 400, but we all know that it means that its improvements to HDR’s most important aspects are limited.

24 or 25-inch monitors with 1080p resolutions are still popular since they are still used in business and enterprise applications, as well as competitive gaming. It doesn’t look too sharp so scaling isn’t necessary and most GPUs will be able to run games at high framerates. Everyone is looking towards higher resolution models now, but the serious E-Sports gamers out there still prefer this format since most official competitions still use it.

The Aorus FI25F produces 110% sRGB and around 75 DCI-P3 which slightly exceeds the brand’s guaranteed vibrancy and all-around great for an E-Sports monitor. Default calibration could be better since the deltaE average at stock settings was at 3.12. That isn’t perfect or close to the best we’ve seen, but it’s already decent for gaming or daily use.

Calibrating the Aorus FI25F can improve that score to a dE average of 1.89 which is better and more balanced. Some users might not be able to readily discern the difference, so we recommend tweaking the monitor manually until it looks natural to you. Buying a colorimeter for a monitor like this isn’t worth it, but it would great to fine-tune it if you already have one.

the backlight on the Aorus FI25F is exceedingly bright at 100% since it can reach 440 cd/m2 which simply too high for extended use. The IPS panel’s contrast ratio at 40% backlight hits 1217:1 which is fantastic for an IPS module. However, the screen’s black luminance still won’t be as impressive as VA panels, so some dark scenes can still look grayish or washed out.

Panel uniformity for the Aorus FI25F sample is overall excellent since there are no considerable deviances on the screen’s quadrants. There was a slight hint of backlight bleeding on the top corners, but they are only noticeable when viewing an all-black image. Do take note that this aspect varies between every unit, so there are better and worse specimens out there.

The Aorus FI25F is a very fast gaming monitor when it comes to pixel response time, and the only quicker models are either 280Hz or 360Hz variants. Motion blur is practically non-existent at 240Hz, so there is little need to use overdrive. You can use the feature if your framerate doesn’t reach close to the maximum refresh, but even then, the monitor still looks blur and smudge-free.

The Aorus FI25F is a FreeSync gaming monitor but it also works flawlessly with Nvidia’s G-Sync Compatible mode. It is always nice to be able to use both since you are free to choose which GPU to buy when it’s time to upgrade. Input lag sits at a little under 4ms at 240Hz, so there is no need to worry about de-synced instances while gaming.

Thoughts on the Aorus FI25F

The Aorus FI25F is a great gaming monitor for E-Sports players who want a responsive and blur-free display solution. Its image quality isn’t the best we’ve seen, but the differences aren’t readily discernable unless you have a monitor with better color quality to compare it with. The design may be too aggressive for some, but the features, including its RGB lighting, are always welcome additions to a premium device.

We don’t have any issues with the Aorus FI25F, but it does have a few limitations that you should cross out from your reasons to buy list. Its HDR feature is quite limited to the point of being unusable and it lacks the ANC feature that made its predecessors unique. However, it’s still a great buy since its price is competitive in its segment, and only a few can be considered better when it comes to gaming performance.