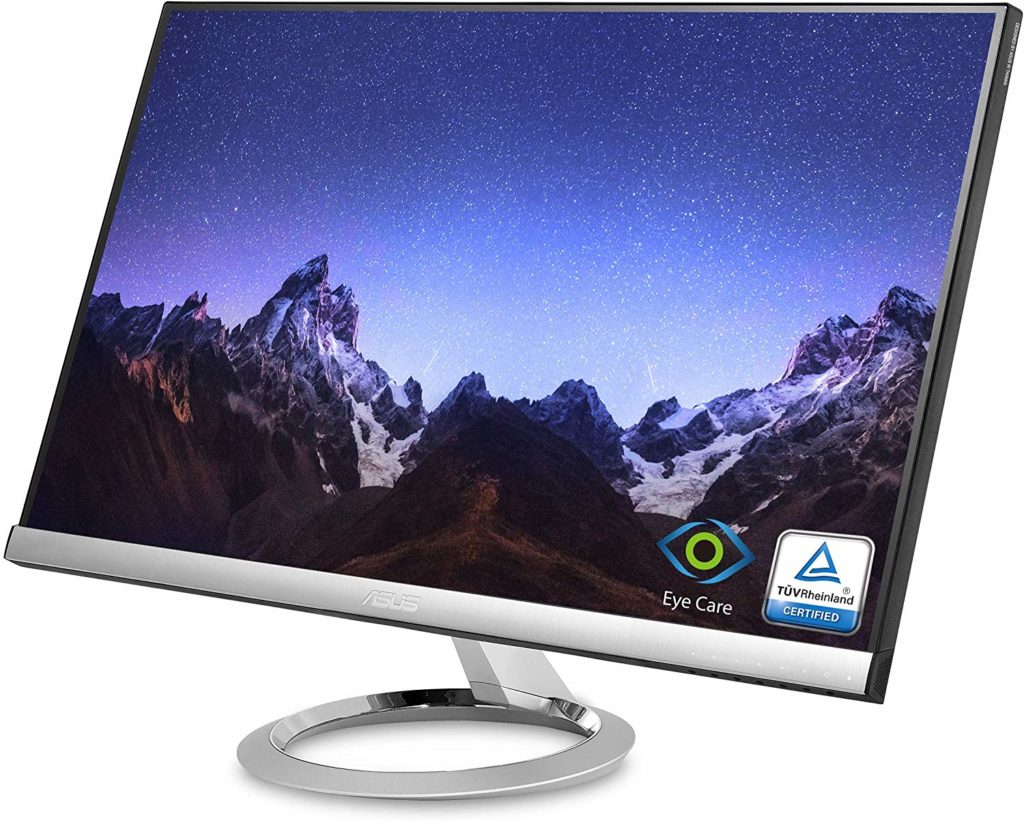 The Asus MX279HS is a beautifully-designed, yet inexpensive IPS monitor that’s meant for all-around use in the home or office. The product promises a clear and vibrant screen that includes Asus SonicMaster speakers for a decent experience when it comes to entertainment purposes. The Asus MX279HS looks like a premium variant, but does its budget-friendly pricing hide some limitations which should shave it off your shopping list? 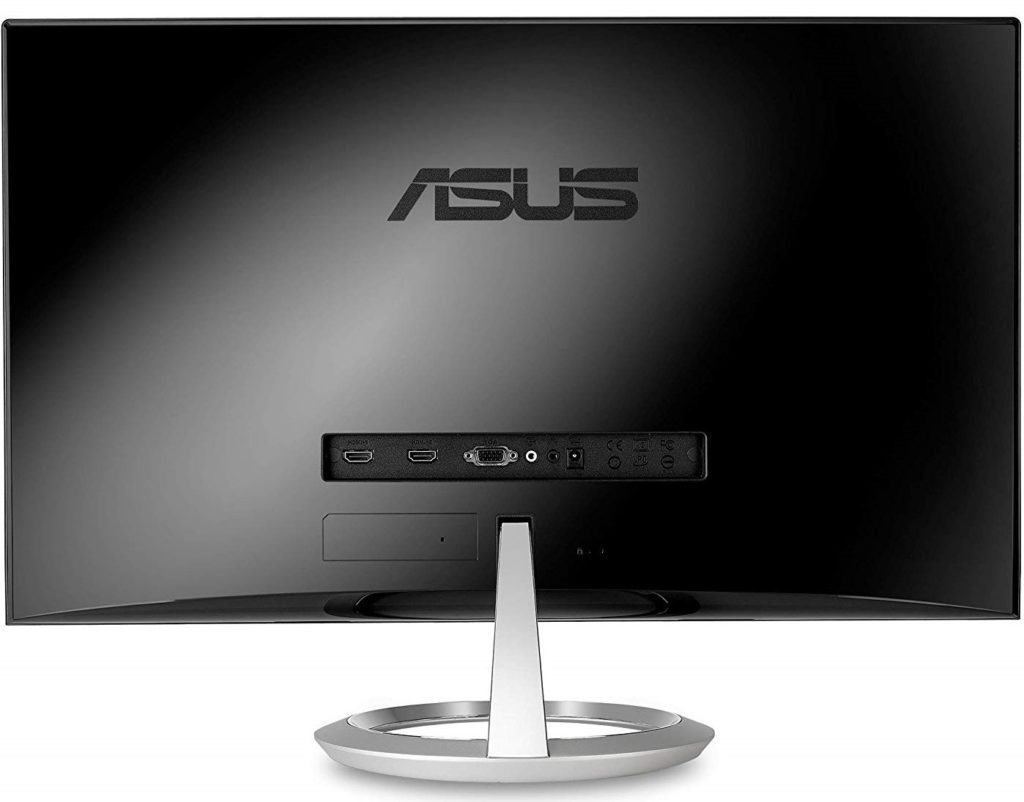 The Asus MX279HS sports a modern aesthetic that makes it ideal even for avant-garde offices or posh homes. The monitor’s silver finishes look refreshing in a market saturated with black housings, but the glossy surfaces are prone to scratching even with the lightest touch. The display area is bezel-free on three sides, giving the user that its bigger than it is. 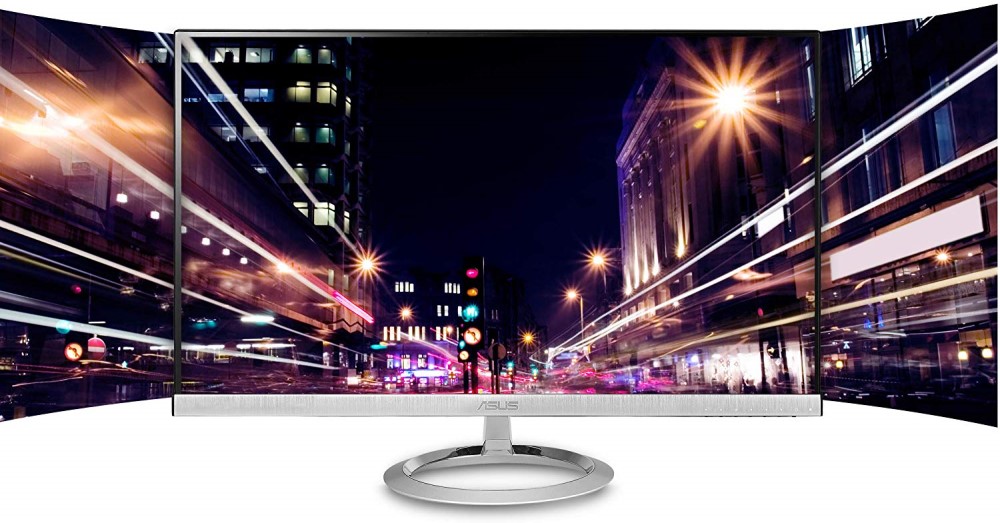 This design also makes the Asus MX279HS ideal for multi-monitor setups that won’t punish your bank account. Inner panel borders are still visible when it’s powered on, but they are almost unnoticeable even if you have two or three side by side.

Build quality for the Asus MX279HS is decent since the panels do not feel brittle or cheap. The device has a low center of gravity, but it surprisingly can hold its weight to avoid wobble. All of the seams match perfectly, and you won’t get the impression that this model is one of the cheaper offerings out there.

You should also consider that the Asus MX279HS has a non-removable stand that is limited to tilt for adjustments. The product was not designed to be VESA compatible, so you are stuck with this configuration. The good news is that the circular base doesn’t take up a lot of space, so it shouldn’t get in the way of your other peripherals.

The Asus MX279HS uses OSD buttons instead of the effective and easy to use joystick implementations on their gaming models. They are clearly labeled and responsive, but it’s sometimes difficult especially in the dark. The OSD itself was pretty responsive during testing, so using it wouldn’t be so difficult once you get used to the buttons.

The connectivity layout for the Asus MX279HS is slightly limited for today’s standards since it doesn’t include DisplayPort. However, its dual HDMI 1.4 ports and a VGA connector for older machines is all you will ever need for 60Hz 1080p operation. There is a pair of 3.5mm jacks for audio input and output which will let you utilize the built-in speakers.

The Asus SonicMaster speakers on the Asus MX279HS are noticeably clearer and more powerful than the typical sets installed into monitors. The highs and mids are more noticeable here, but the bass still lacks the power needed for gaming. You will still go for your headset for the latter purpose, but what’s included sounds nice for background music or even for movies while relaxing.

The Asus MX279HS utilizes a 27-inch IPS panel with a 1920 x 1080 resolution, 60Hz refresh rate, and 5ms response time. The backlight is limited to 250 cd/m2, while the contrast ratio is listed at a typical 1000:1. These specs are not high-end or meant for specific purposes, but it’s still usable for casual enjoyment aside from the typical office stuff we process.

The screen size of the Asus MX279HS is slightly too large for Full HD, so some fuzziness might become noticeable at close range. This runs true for some graphically-intensive uses such as gaming or editing, but we don’t think the target audience will have this issue. It’s worth mentioning that displays like this are friendlier on eyes since you don’t have to squint too hard or use scaling to read a wall of text.

The Asus MX279HS only reached an sRGB color coverage of 93%, but that’s sufficient for basic use such as browsing or watching youtube videos. The default profile produced a DeltaE average of around 2.94 which is slightly higher than the ideal. However, color variances will not be as noticeable in games or movies, but this model isn’t ideal for editing purposes.

The default color temperature is slightly off towards the cool side as well, but it lessens the yellowish warmth of sRGB-calibrated displays. However, these scores can be improved to be closer to the 6500K point and the DeltaE to around 1.25 with a few tweaks. Doing so makes the monitor usable for basic editing, but most will still look into more vibrant options for a bit more if that’s the intended use.

The Asus MX279HS reached a maximum contrast of 1060:1 that results in slightly better black luminance scores. The screen still looks grayish in the dark like most IPS panels, and selecting a VA variant instead is your only option to avoid it. Gamma sits at 2.21, so there is no washing out or oversaturation on the monitor.

The Asus MX279HS’s panel uniformity needs some improvements, but these flaws are expected on IPS panels. The upper and lower edges had some backlight bleeding which resulted in some clouding issues when dark scenes are in play. Take note that IPS panels are not made equal, so make sure that you buy from a seller that will not give you a hard time for returns and exchanges.

Pixel responsiveness isn’t one of the Asus MX279HS’s strengths, especially since its limited to 60Hz. Blurring is slightly more noticeable than some models we’ve seen, making this option less ideal for gaming. The monitor includes an Overdrive feature in the OSD, but it either is ineffective at lower levels or it will induce overshoot when set higher.

The Asus MX279HS doesn’t support FreeSync or G-Sync compatibility, so buttery smooth frames are not guaranteed. However, it doesn’t take a lot of GPU horsepower to run a 1080p display, so in most cases, you will be okay. Input lag sits at 9ms at 60Hz, so there will be no perceivable delay while gaming.

Thoughts on the Asus MX279HS

The Asus MX279HS is a decent home or office monitor for just about any type of computer usage. It isn’t refined for very specific purposes such as competitive gaming or editing, but it can get the job done if you need an affordable display solution. 1080p monitors are less desirable nowadays, but its the category where users will struggle less to adapt to.

We like the design of the Asus MX279HS, but it incurs too many limitations which the SonicMaster speakers won’t be able to balance out. The severely limited ergonomic options for the monitor will surely turn off a lot of buyers, but it’s difficult to find a better model at this price range. The Asus MX279HS is a good budget IPS monitor, but you have to live with the accompanying limitations which helped lower that cost.