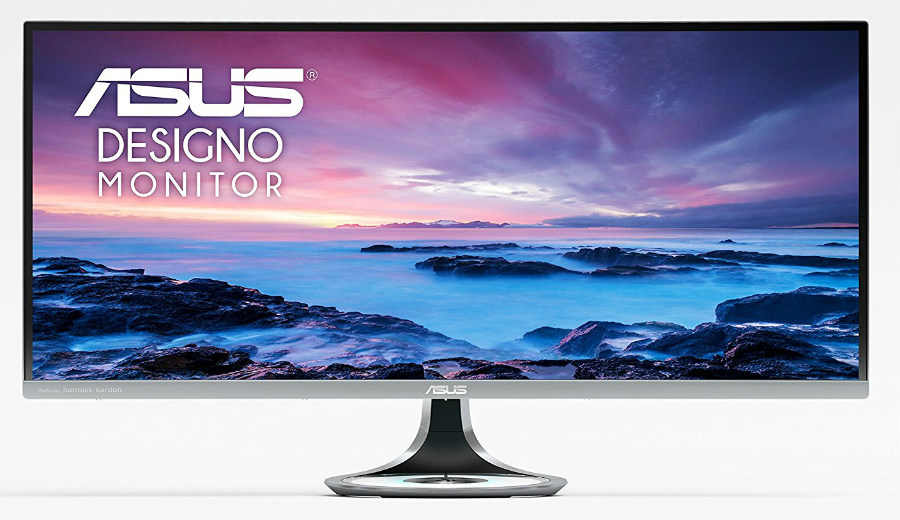 The Asus MX34VQ is a fantastic new ultra-wide monitor with luxurious features meant for executives and gamers alike. Boasting of modernist design, this product looks like a piece of art worthy of sitting on top of any desk in your living room, office, or even your gaming battle station.  It is also priced like a work of high art. 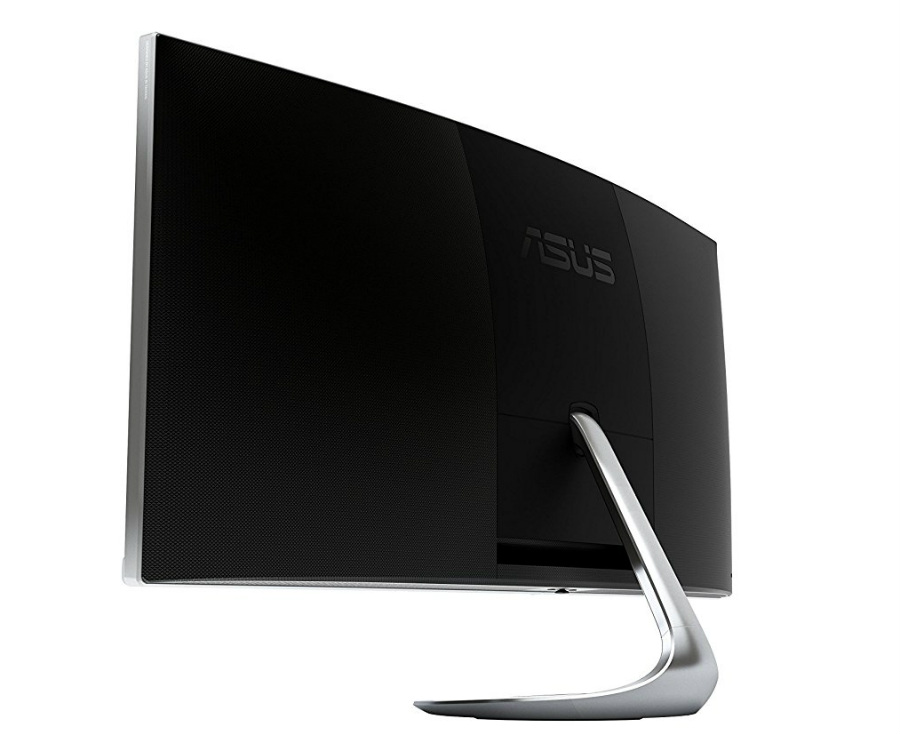 The Asus MX34VQ features a stunning and sophisticated exterior design which we prefer over the standard aggressive looks brands employ to entice gamers. The Asus MX34VQ’s awe-inspiring 34-inch screen utilizes a relatively thin dual stage design which is only 8.5mm wide except at the bottom. The last acts as a silver metallic accent to the magnitude of this product which completes its Designo aesthetic pedigree to match the svelte line.

The Asus MX34VQ looks sexy even from the side since it only measures 18mm at the edges even if it slightly bulges going to the center. Every angle including the rear of this model looks exquisite, and you can tell that Asus also put a lot of effort into designing the MX34VQ.

To operate the stunning capabilities of this ultra-wide monitor, the Asus MX34VQ’s I/O layout includes three HDMI 2.0 ports and a lone DisplayPort 1.2 slot. This feature set seems to be a little lackluster by today’s standards and judging from the Designo series target market and its needs; a convenient USB 3.0 hub should have been included.

The Asus MX34VQ makes up for the limitation by utilizing a smart stand which includes a base with Qi Wireless Charging capabilities. If you have a compatible mobile device, you can simply plop it on top of the circular gadget, and it charges while you use or even if this monitor is powered off. The base glows in a blue hue which pulsates while in use.

This techy feature, however, comes with a caveat. The stand is neither removable nor adjustable except tilting, so you are stuck with desk placement. There are also no VESA mounting holes, which dictates that the Asus MX34VQ was meant to sit on a desk, and a very large one at that.

To wrap up the total package, the Asus MX34VQ includes a pair of high-quality speakers with eight Watts of power each. While not as good as a dedicated set, we can say that the added pair does sound better than other offerings. Asus did have some help in this regard since the speaker uses Harman Kardon technologies seamlessly integrated with the company’s Asus SonicMaster Design.

The Asus MX34VQ boasts a stunning 34-inch VA panel with a 3440 x 1440 resolution and 100Hz refresh rate quickly making it a gaming grade screen. This model features an 1800r curvature which feels tighter than some newer models we recently reviewed, and the form does help improve the immersive qualities of VA gaming monitors.

Asus claims that the MX34VQ can produce a contrast ratio of up to 3000:1, an ability highlighted by VA panels, but we observed it to be closer to around 2600:1 at its default brightness. We think that result is still worlds apart to IPS and TN performances, so you have no reason to doubt that your blacks will be inky dark and grayscale performance in every situation superb.

Color performance is also excellent for the Asus MX34VQ, since the monitor has 100% coverage of the sRGB gamut, with a few excess in the blue and green fields. Images appear vibrant and correctly saturated, although we would advise users to take the time to tinker with the settings since most of the included splendid presets to distort the saturation levels in some images. Even the sRGB mode incurs a penalty on greens in pictures, since it introduces a slight purple hue.

One aspect where the Asus MX34VQ did not exceed our expectations is in its uniformity. We noticed some minor deviations towards the sides. This issue is prominent with curved screens, but it is mostly unnoticeable except for extra sensitive users. Just remember that the panel lottery concept applies to this product as well.

The Asus MX34VQ may look the part as your boss’ monitor, but we are surprised and pleased to mention that this product comes with 100Hz of refresh rates. We initially speculated that this display was a glorified 60Hz computing screen when it was announced during the past CES event.

Performance in our Battlefield 1, our ideal test bed, was superb. Images appeared crisp and smooth thanks to the high resolution and refresh rate. Shade transitions were quite strong especially in the darker areas of the game. We noticed a bit of “black crush” with the Asus MX34VQ, and while it did induce some losses in detail, it isn’t a deal breaker overall.

Since this model features a VA panel which is still plagued with pixel transition issues, we noticed some interlacing and ghosting in some scenes, especially towards the bottom part of the display. This flaw is caused by the slower black to white transitions of monitors like this, so we think that the advantage of higher contrast levels to produce stunning detail outweighs these minor misgivings we noticed.

Gamers will be pleased with the Asus MX34VQ since it has plenty of agility in responding to commands and quick image transitions. Input lag is measured at a little over 6ms, which is excellent for something not focused on these kinds of things.

This model also comes to Freesync certified, so you can get all the help you need if your frame rates stutter. As long as you have a compatible graphics card, you can thoroughly enjoy the experience this product promises, plus a few more.

The Asus MX34VQ is an easy recommend just like its G-Sync counterpart since you get plenty of striking aspects at the cost of living with a few minor flaws and limitations. This model is pleasingly cheaper at $799.00 than the 1-grand plus Asus PG348Q, but it has a lot to offer for meticulous customers.

The 100Hz capable panel provides superb viewing pleasure for any user including gamers. 3440 x 1440 isn’t an easy task for just any GPU, but thankfully, Asus did not forget to include Freesync in the package. The Asus MX34VQ also has plenty to snappiness to make customers happy even for first shooter games, but we think that the faster TN variants should avoid issues related to pixel transition.