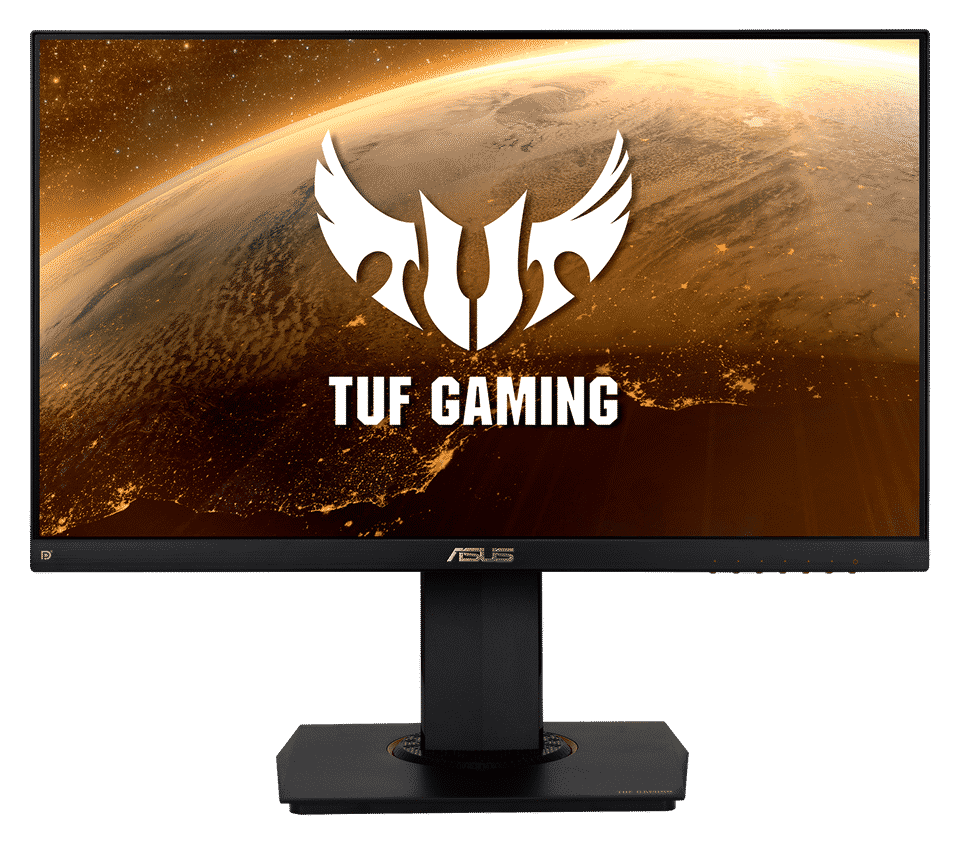 The Asus VG249Q from the TUF Gaming lineup offers a vibrant 144Hz IPS panel in a budget package that has premium quality. It’s a slightly more expensive pricier competitor to the AOC 24G2 which has passed many reviewers’ criteria as one of the best you can buy. Let’s check out if the Asus VG249Q is the top dog in its segment when it comes to gaming performance and image quality. 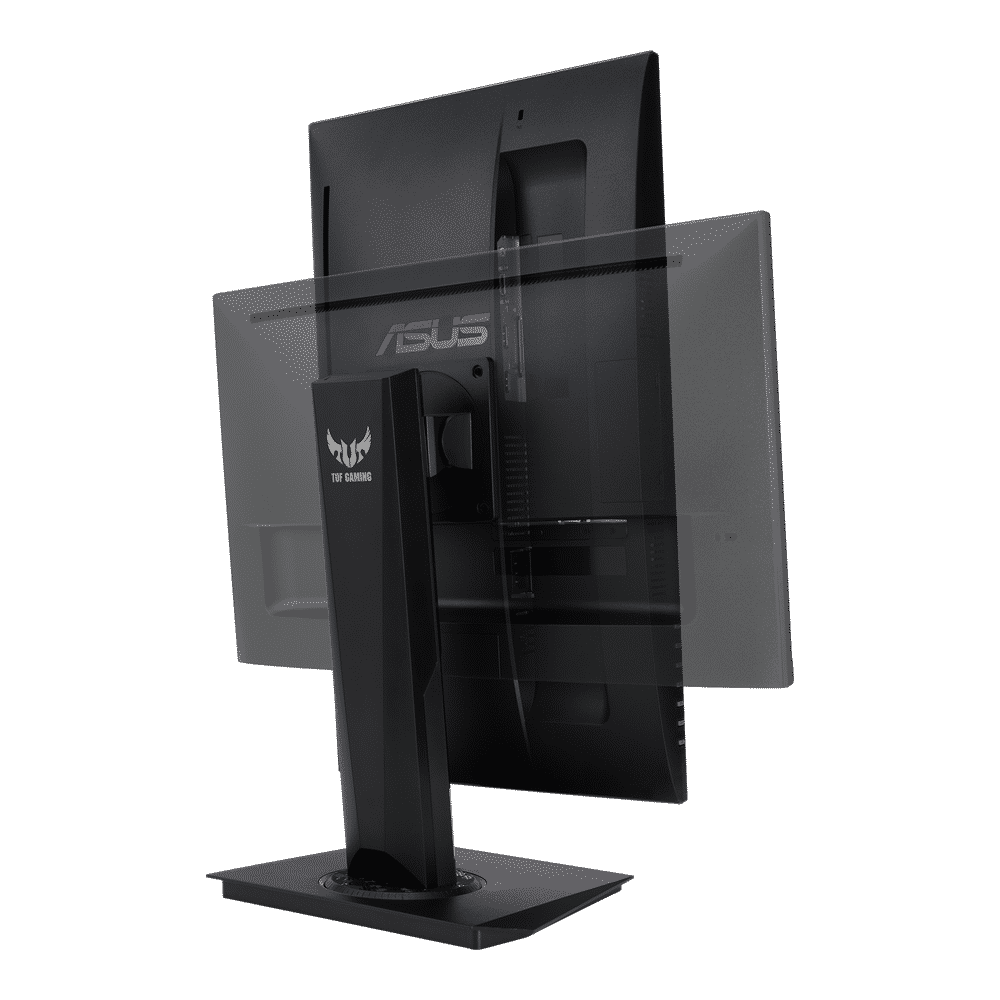 The Asus VG249Q sports a familiar aesthetic that simply works and you will find it on most of their gaming display variants. The monitor has a matte black chassis that is easy to maintain and protect from dust, fingerprints, or smudges. The screen is bezel-free on three sides so users can enjoy the view with fewer distractions.

The Asus VG249Q offers a familiar format and it’s not overbearing when it comes to size and weight. The 24-inch model will fit most desks with enough space for other peripherals even if you have a full streaming setup.

It doesn’t weigh a lot at a little over 13 pounds, so it’s quite portable in some cases. Build quality for the Asus VG249Q is excellent even if it falls within the budget segment of gaming monitors. Asus spared no expense when it comes to materials, so the product is as durable as its premium siblings in their entire portfolio. There are no cosmetic defects and the stand doesn’t wobble uncontrollably even if you are a heavy typer.

But one of the biggest letdowns we saw on the Asus VG249Q is its use of OSD buttons instead of the usual joystick controls you find on the brand’s more expensive variants. The keys are responsive and finished in red, but you don’t have a direct line of sight to them unless you tilt the display up. It is still quite easy to miss-press keys unintentionally so some practice in using them might be in order.

The stand included with the is fully adjustable so finding a comfortable position is doable for everyone. It’s one of the main advantages of the monitor over budget offerings, but almost every manufacturer is already doing it for their lower end. You can use VESA mounts with this model, but it is only necessary if you are building a multi-display array or if you absolutely need to save space.

Another aspect of the Asus VG249Q that takes a hit to help it meet its low price point is its connectivity layout. The panel at the rear only includes a slot each for DisplayPort 1.2, HDMI 1.4, and VGA along with a 3.5mm jack for convenience. We’d love to see some USB ports as well, but it’s understandable that not every standard feature is offered for a low-cost model.

The Asus VG249Q manages to include a pair of 2-watt speakers, but they sound tinny and unsuitable for gaming or movies. They can get loud enough, but you’ll notice that the sound breaks up as soon as you hit the upper half of the volume range. However, that’s ok since gamers will use headsets anyway, and it’s always nice to have a backup for other purposes such as conference calls or simple background music.

The Asus VG249Q sports a 24-inch IPS panel with a 1920 x 1080 resolution, a 144Hz refresh rate, and a 1ms MPRT response time. The backlight is rated at 250 cd/m2 while the contrast ratio is listed at 1000:1 like most IPS panels. This model doesn’t offer special features such as HDR 400 since its focus is to give gamers both vibrant and smooth visuals, unlike the TN variants it replaces.

24-inch 1080p screens are still widely preferred nowadays for competitive gaming since they aren’t demanding on the GPU and are comfortable for the eyes. You won’t struggle with getting high frame rates on most GPUs while your peepers are most probably used to the resolution since both schools and offices have used this format for quite some time. It is not going to be a massive upgrade like 1440p or even 4K when it comes to sharpness, but at least visibility and legibility will be excellent.

The Asus VG249Q covers almost 100% of the sRGB gamut with excellent color accuracy of 1.03 using its default setting. The screen looks balanced and acceptable for more than just gaming, so most users can get away with a few tweaks to the settings. You also get a few presets with the monitor just like its high-end siblings, so you can play around with it and figure out what works for you.

Calibrating the Asus VG249Q results in editing-grade color accuracy with a deltaE average of only 0.31. This kind of performance adds value for users who work with RGB content for websites or anything similar. However, we think that buying a colorimeter just to refine the already superb default accuracy isn’t worth it for gaming purposes.

The Asus VG249Q can exceed its brightness rating since it reaches as much as 295 cd/m2 at 100% brightness. The contrast ratio at 60% of that hits 1050:1 which is great for IPS panels, but still insufficient in improving black luminance. The screen can still look grayish when showing black or dark images, especially when it is used at night.

Panel uniformity for the Asus VG249Q is great since there are no massive light leaks or imbalances in the backlight’s spread. The corners have some minor clouding, but it’s only visible when the screen is blacked out. Take note that this aspect varies between every unit, so there are better and worse samples out there.

The Asus VG249Q’s pixel response time isn’t perfect, but you can use its Trace Free overdrive settings or its ELMB mode. Maxing out the former partially improves the persistence and blurring that still manages to appear on the screen. the ELMB does an even better job, but it lowers the screen’s brightness by almost half.

The Asus VG249Q is a FreeSync gaming monitor, but it also works flawlessly with Nvidia’s G-Sync Compatible mode. This duality extends its value per dollar further since you are free to choose which GPU to use without worrying about VRR functionality. Input lag sits at 4ms at 144Hz, so there is no worry about delays while playing competitively.

Thoughts on the Asus VG249Q

The Asus VG249Q is a great value option for gamers who want a vibrant IPS screen that goes up to 144Hz. Its image quality is surprisingly good for a budget option, giving us an accuracy rating that you would normally find on prosumer models. The monitor’s design has a few downsides, but the durability and reliability we’ve come to expect from Asus are still there.

The biggest downside with the Asus VG249Q is its pixel response time which isn’t as fast as the other 144Hz IPS monitors we’ve tested. You also have to deal with limited connectivity, plus the fact that Asus did not include a DisplayPort cable in the box. It’s a decent buy at $200 to $250, but we’d still pick the AOC 24G2 in an instant. Pros: