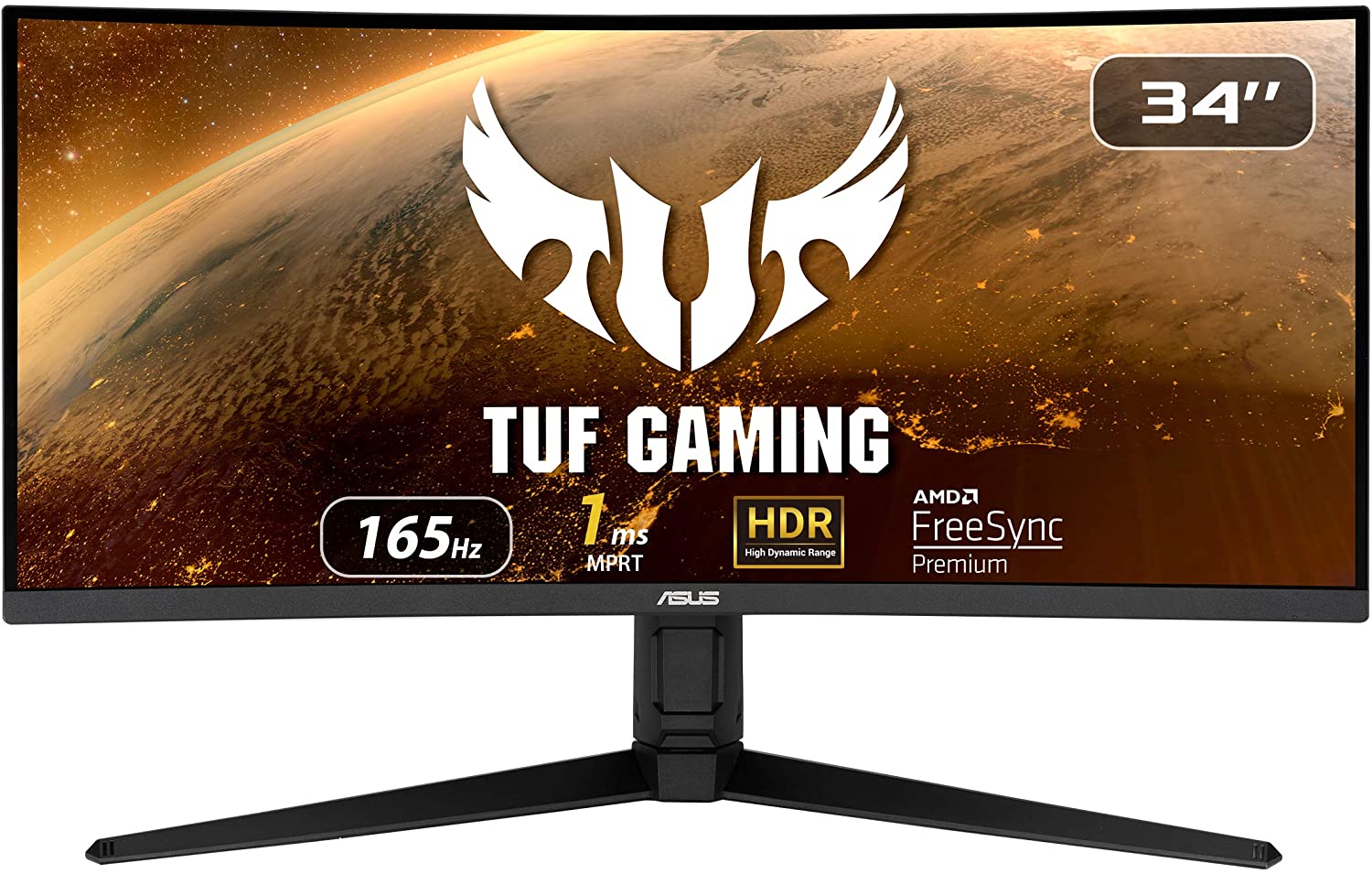 The Asus VG34VQL1B TUF Gaming monitor offers an expansive and vibrant screen that can go fast while engrossing your visual senses. However, the competition it’s facing such as the Gigabyte G34WQC presents better value since they are more affordable by at least a hundred bucks. Let’s check out if the Asus VG34VQL1B is worth the extra premium and the must-buy value ultrawide if you are on the hunt for engrossing and smooth visuals. 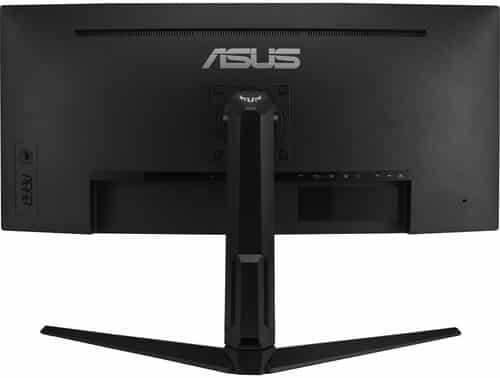 The Asus VG34VQL1B follows the TUF gaming aesthetic you get with newer models like the VG27AQL1A, but bigger and wider. The monitor is finished in matte black, and it doesn’t have the decorative accents and RGB lighting of its Strix counterparts. The monitor is bezel-free on three sides, but minimal inner bezels are still present when it’s in use.

The Asus VG34VQL1B is a value-oriented model, but it’s still a massive beast that your desk has to accommodate. It needs almost a foot of depth and its base’s reach is wider than what most monitors have. It’s also quite heavy at twenty pounds, so be sure that you have a durable surface to place it on.

Build quality for the Asus VG34VQL1B is excellent and it doesn’t seem like it’s a step below the brand’s premium options. The plastic panels used feel thick and reinforced, and there is no wobbling from the stand apart from the slight shake when you nudge it. You also won’t see any cosmetic defects or imperfections just like with its premium Strix and ROG Swift counterparts.

The Asus VG34VQL1B’s control layout is identical to all Asus gaming monitors so previous owners will be familiar with it. You get an OSD joystick that’s accompanied by four hotkeys for easy manipulation and access to its functionalities. You don’t get software-based implementations with these monitors, but that’s ok since it’s easy enough to adjust the settings.

The stand included with the Asus VG34VQL1B offers tilt, swivel, pivot, and height adjustments, so you can get a comfortable view angle instantly. You can’t pivot this model, but that’s ok since ultrawide monitors aren’t meant for portrait use. You can also opt for VESA mounts, but it’s only necessary if you need to save space or want more flexibility.

One advantage of the Asus VG34VQL1B over its cheaper counterparts is it includes four usable USB 3.0 slots for your accessories. It also has two slots for DisplayPort 1.4 and HDMI 2.0 so you can connect a myriad of gaming platforms to it, including a work PC. This kind of usability always extends the value of a monitor, so it’s a big plus for this variant.

The Asus VG34VQL1B also includes speakers, but they only get 2 watts per channel of power so they aren’t ideal for gaming. They can get decently loud, but that doesn’t mean they sound good since they distort almost instantly. That’s ok since immersive gaming demands tuned headsets anyway, and it’s always nice to have a backup for other use-cases.

QHD screens are great for both gaming and productivity since they have space and are sharper and more detailed than 1080p variants. The Asus VG34VQL1B’s ultrawide screen expands on this even more since it has more horizontal space. Your workflows will be much smoother, but games will be more impressive but at the expense of framerates.

The Asus VG34VQL1B produces 100% of the sRGB gamut and around 90% of the DCI-P3 gamut which is excellent for a gaming monitor. default accuracy is decent since the deltaE average managed to stay at 2.11, so there is no need to calibrate it right away. Most users will be happy with a few tweaks to the settings, so this monitor is a great pick if you want to game right away.

Calibrating the Asus VG34VQL1B with a colorimeter can improve the color accuracy to 0.69 which makes it suitable for color-critical work. You can also use its sRGB filter which is also quite accurate, but it will limit the gamut to 98% sRGB. In most cases buying a colorimeter isn’t worth it, but feel free to use it if you already have one.

The Asus VG34VQL1B reached as much as 451 cd/m2 in SDR and around 502 cd/m2 in HDR, along with a 4820:1 maximum contrast. It only carries HDR 400 certification, but its HDR performance looks slightly better than most of its counterparts. It’s not comparable to the more expensive models in the brand’s lineup, but it’s capable of highlighting details better than its competitors.

Panel uniformity for the Asus VG34VQL1B is decent, but there are some light leaks on the top and bottom edges of the screen. They are only noticeable in all-black images but they are invisible in full-colored scenes. This can vary between every unit due to tolerances, but it’s quite common with curved monitors.

Responsiveness for the Asus VG34VQL1B is a mixed back since it still shows some trailing in fast-paced and contrasting transitions. Setting the overdrive to its 20 setting helped without overshoot, but it cannot eliminate the smudges completely. Your only option here is its ELMB feature but it will deactivate VRR, unlike the other TUF monitors.

The Asus VG34VQL1B is a FreeSync Premium gaming monitor, but it also works flawlessly with Nvidia’s G-Sync Compatible Mode. This duality is nice to have since both companies have competitive GPUs now, so you are free to choose which one suits you best. Input lag sits at 4ms at 165Hz, so there is no need to worry about delays or de-synced instances.

Thoughts on the Asus VG34VQL1B

The Asus VG34VQL1B is your best pick if you want better HDR performance and color quality in the $500 ultrawide arena. Its imaging isn’t perfect, but its color coverage and accuracy are better than its main competitors. it’s quite fast for a VA ultrawide, so it’s also great for competitive gaming even if it’s 16:9 siblings are more suited.

The main issue with the Asus VG34VQL1B aside from its slight smudging issue is its considerably higher price. the Gigabyte G34WQC which hovers closer to $400 isn’t as vibrant and is only 75Hz, but those minuscule differences do not warrant a more or less $100 difference. This model is the better buy, but you have to spend more to enjoy that advantage.