The BenQ EX2780Q is an exquisite piece of tech that offers premium features like HDR compatibility and equally unique and opulent styling. It’s easy to mistake the monitor as a business solution, but its 144Hz QHD IPS screen and ability to produce HDR effects reveal its affinity for gaming and entertainment. The BenQ EX2780Q’s attractive tricks do not come cheap, but can it produce a fantastic overall performance to balance the cost? 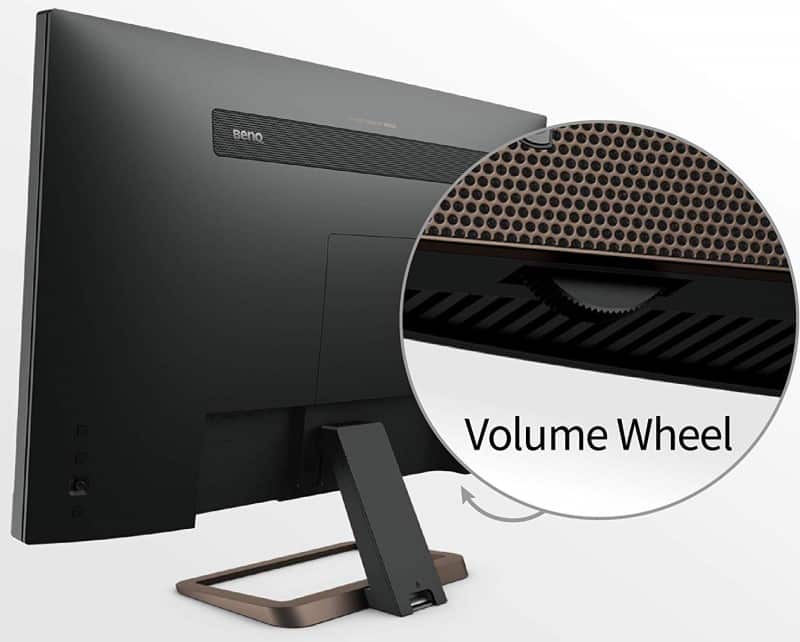 The BenQ EX2780Q features a refreshing aesthetic that you won’t find on any of the brand’s monitors. The matte black chassis is embellished with copper accents on the base and the bottom bezel, making it a fantastic pick for exotic builds with copper tubing and the like. The monitor is bezel-free on three sides, while the bottom looks much thicker due to the grill for the included speaker system.

You will still see panel borders when the device is in use, but it’s quite thin so you won’t notice them while gaming. This makes the BenQ EX2780Q ideal for dual or triple setups, especially since the product’s proportions are very modest.

Build quality on the BenQ EX2780Q is excellent and it shows in the refinements of the monitor’s aesthetics. Every bit is perfectly molded, so you won’t see gaps or warping on all of the monitor’s parts. We also did not notice any audible issues on the monitor such as electronic humming or creaking from the mechanisms. 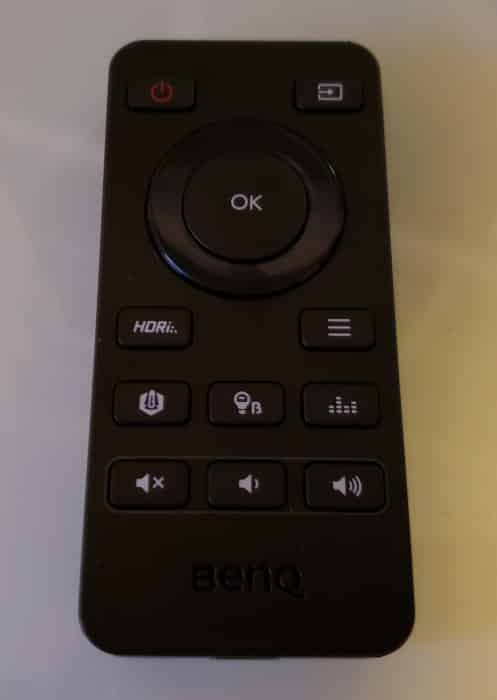 Controlling the BenQ EX2780Q’s functionalities is easy thanks to three helpful features included in the design. The device includes a very capable remote that allows you to manipulate the monitor’s settings from anywhere in your room. There is also a 5-way joystick at the rear for nearfield use and a nifty volume wheel which eliminates the need to set the speaker output via your OS. 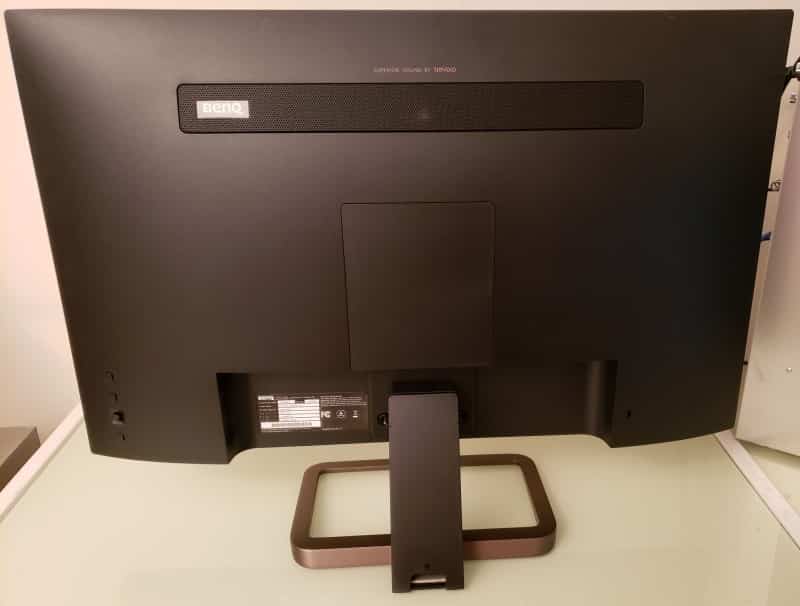 The I/O on the BenQ EX2780Q doesn’t offer a lot of ports, but it includes sophisticated standards for your video input needs. You will find a DisplayPort 1.4 connector as the primary, along with two HDMI 2.0 receptacles for secondary host machines like gaming consoles. There is also a USB-C 3.1 slot that supports DP Alt mode for MacBooks and the like, but it’s limited to PD10W as far as charging is concerned.

One annoying downside to have for a 600-dollar monitor like the BenQ EX2780Q is its tilt-only stand. It’s great that the upright and its removable back cover allows you to route cables neatly, but we would prefer more adjustability from a device of this caliber. The device is VESA compatible, but that adds more cost and we know many will look elsewhere if they have to shell out more cash.

What’s fantastic about the BenQ EX2780Q is it includes a full speaker set composed of 2-Watt satellites and a 5-Watt mini-sub. The add-on looks like it belongs in the Trevolo line of speakers which is the brand’s attempt at audiophile-level PC audio. The black bar in the middle contains the lighting sensor which helps the device adjust the backlight to match your ambient settings.

The audio quality will tell you that you won’t need to buy a separate set to enjoy movies and music. The speakers have a decent range thanks to its mini-sub, plus it can get loud without distorting. Headsets are still preferable for competitive gaming, but it’s nice to have an audio solution for when you want to sit back and relax.

The BenQ EX2780Q sports a 27-inch IPS panel with a 2560 x 1440 resolution, 144Hz refresh rate, and 4ms response time. The contrast ratio is listed at a typical 1000:1, while the backlight is rated with a 400cd/m2 peak output. This monitor is HDR compatible, but its implementation is slightly different compared to full HDR monitors like the Asus PG27UQ. 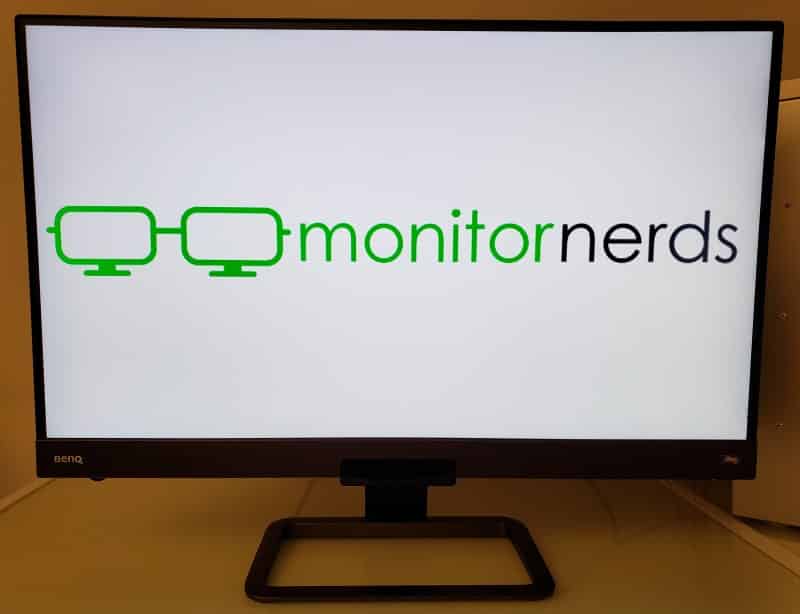 The 27-inch size and 1440p resolution are perfectly matched, so you won’t need to use scaling for text in exchange for the bump in sharpness. Game graphics will look cleaner with straighter edges, thanks to the higher pixel per inch ratio of this variant. Some games will already look fantastic even without image improvement technologies such as Anti-Aliasing which is great especially since QHD is quite taxing on most GPUs.

The BenQ EX2780Q produces a surging amount of color, reaching well over 100% sRGB coverage and around 90% DCI-P3. This result falls slightly short of what BenQ advertises, but its more than enough for the monitor’s intended use. Accuracy could use a bit of help from a colorimeter with its DeltaE average of around 2.9, but we don’t think gamers will notice the variances.

The biggest benefit you can get from calibration is correcting the color temperature to a more ideal 6500K point. Contrast is fantastic for an IPS panel at a maximum of 1095:1, so the grayish look when viewing dark images is lessened on this model. IPS variants tend to have high black luminance levels, but it’s within controlled limits on the BenQ EX2780Q.

One of the highlights of the BenQ EX2780Q is its HDR compatibility and more specifically, the HRDi function. The monitor includes the brand’s emulation which we saw on models like the EW3270U for standard HDR performance. This implementation is one of the best we have seen in the market when it comes to pseudo-HDR, adding small detail improvements in compatible games like the latest Modern Warfare.

HRDi, on the other hand, brings BenQ’s Brightness Intelligence Plus into the mix which utilizes a front-mounted light sensor to adjust the screen accordingly. This feature automates the utilization of the backlight, so it has mixed results depending on your preferences and media. Well-lit scenes and explosions are better highlighted with this mode on, but the night time house breaching scene in modern warfare looks even darker.

Visibility becomes even more challenging at this point, but it adds a hint of realism to the ominous feel the story tries to portray. The mode also helped to bring out the advantages of Ray Tracing, but we know competitive gamers will prefer visibility over a more-realistic looking night engagement. HRDi also throws color accuracy out of the window, but this model isn’t intended for editing purposes like its PhotoVue and DesignVue siblings.

Panel uniformity for the BenQ EX2780Q is middling at best due to some light bleeding at the edges. Some of the darker scenes in Modern Warfare showed slightly noticeable clouding near the edges which you will see if you look close enough. Take note that this aspect varies between every unit since no two IPS modules are made equal in every way.

The BenQ EX2780Q isn’t comparable to TN models like the Asus PG278QR when it comes to responsiveness. However, that’s obvious so you should expect some blurs and a bit of ghosting in fast-paced sequences. Thankfully, it doesn’t show as much to require specialized blur reduction features like ULMB.

The BenQ EX2780Q is a FreeSync gaming monitor, but it should also work with G-Sync as long as you use the DisplayPort slot. The monitor isn’t certified so the latter isn’t guaranteed, but it can be activated manually via Nvidia’s Control Panel. Input lag sits at a little over 4ms at 144Hz, so you won’t see any delays or “de-synced” instances during gameplay.

Thoughts on the BenQ EX2780Q

We love the BenQ EX2780Q’s design and feature set which expands your options when it comes to visual experiences. The screen provides fantastic vibrancy, while the brand’s HDR implementation including the BI+ enhanced HDRi mode finds its place in engrossing titles. These characteristics combined with the capable speaker system makes the device an attractive option for gaming and entertainment setups.

However, the BenQ EX2780Q does have its quirks and limitations which start with the tilt-only stand. The $599 price is also a bit too steep by today’s standards for a 27-inch QHD gaming monitor. The EX2780Q has a lot of sweet add-ons, but you have to pay a premium to enjoy them.