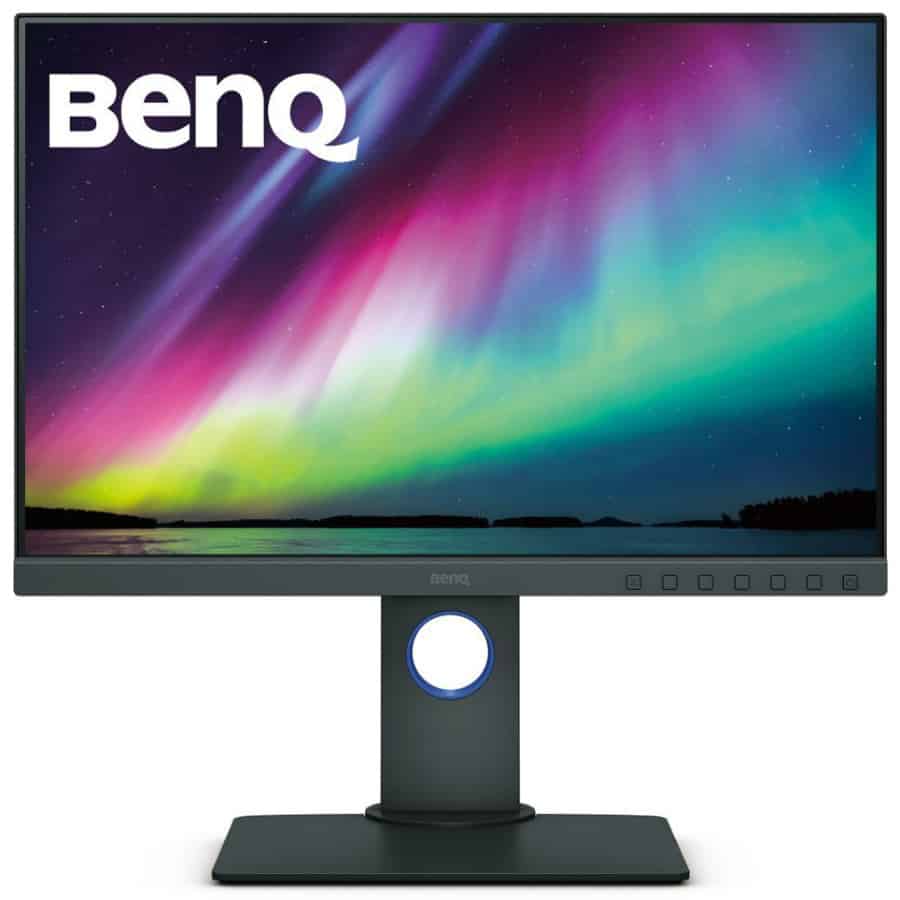 The BenQ SW240 offers a 16:10 IPS screen for professionals with a clear focus on color accuracy and comprehensive gamut coverage. Just like the AOC X24P1 we featured earlier, this monitor revives the rare 1920 x 1200 resolution which adds extra real estate that can enhance your workflow. The BenQ SW240 is a practical choice if you want a color-accurate monitor that has a lot more to offer than your vanilla 1080p display. 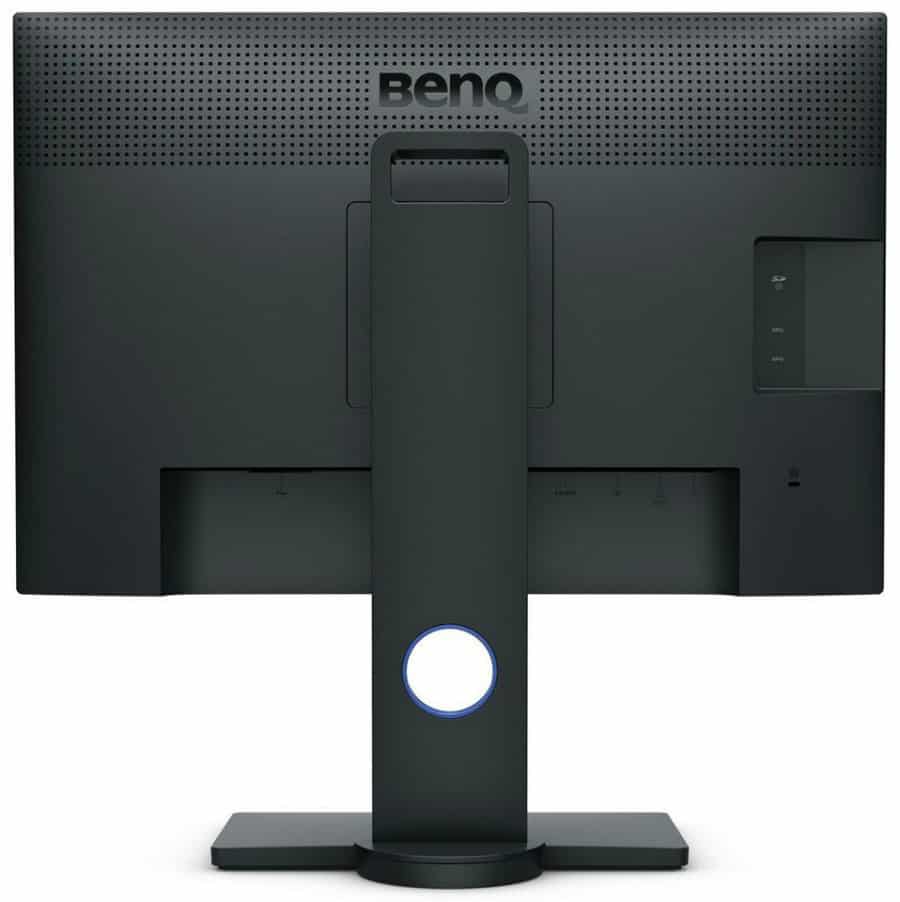 The BenQ SW240 shares its exterior design with the GW line of monitors that comes in matte black with sleek proportions. The monitor is bezel-free on three sides save for the dual stage borders with a thin outer layer and nearly invisible panel borders. This treatment makes the display enticing for triple monitor setups which is a bit taller than the typical 16:9 options in the market.

Only the bottom bezel is noticeably thicker on the BenQ SW240 due to the placement of the OSD buttons up the front. To compare, BenQ monitors like the GW2480 have them at the bottom which is clean looking but can be confusing at times. It does have a detrimental effect on the cleanliness of the appearance, but convenience trumps looks any day.

Build quality is simply amazing, much like many of the brand’s monitors. The fit and finish are comparable to the higher-end variants such as the SW271, so there are no uneven creaks or rough edges. The device stands stable once propped onto a desk, and its joints hold your desired view angle permanently.

What we love from the brand’s monitors is their flexibility without needing aftermarket brackets or armatures. The BenQ SW240 already includes an articulated stand that can tilt, swivel, pivot, and even offer a height adjustment range of up to 5 inches. There is a VESA bolt pattern at the back, but there is little reason to utilize it.

The BenQ SW240 also has one of the best connectivity options in its class which should provide ease of use for professionals. The layout includes a DisplayPort 1.2 and HDMI 1.4 as primary video inputs and a DVI-DL slot for legacy devices. There are also three USB 3.0 slots and a 7 in 1 card reader for your peripherals and storage devices.

The x is designed to fit a calibration hood since its part of the Photovue line like the SW271 and SW320. However, the accessory is an optional add-on, meaning you have to buy it separately from BenQ or other retailers like Amazon. To be honest, it isn’t necessary since we find hoods to be awkward, especially for smaller screens.

The BenQ SW240 sports a 24.1-inch IPS panel with a 1920 x 1200 resolution, 60Hz refresh rate,  and a 5ms response time. A contrast ratio of 1000:1 and a max brightness of 250cd/m2 are also listed in the spec sheet, indicating that there is no HDR support despite the promise of extensive gamut coverages. The extra vertical space may seem small to those used to larger resolutions or even ultrawides, but there is some value in it other than saving you a few up or down scrolls.

1920 x 1200 isn’t common nowadays, but it’s popular for creators due to the extra space. The extra pixels do not add a noticeable difference in crispness, but the screen will retain the familiar and comfortable look of 1080p variants. Another considerable upside is you won’t have to use scaling to make text legible, making the monitor usable for everyone, including those with less than 20/20 vision.

The BenQ SW240 offers impressive capabilities in color quality despite sitting a few tiers lower than its Photovue siblings. The IPS panel is capable of producing 97% of the sRGB and Adobe RGB gamuts when their presets are used. Accuracy is excellent thanks to BenQ’s fantastic calibration, with sRGB sitting at DE 1.8 while Adobe RGB is at DE 2.1.

The screen’s overall color temperature for its modes are all very close to 6500K, so there is no necessity for colorimeter tweaking. The only flaw the tests noticed is that gamma is at around 2.15 rather than 2.2, but the difference will be too difficult to notice in practice.

The BenQ SW240’s contrast averaged at 950:1 at comfortable brightness settings. We recommend staying at 40% to 60% brightness for regular use, since setting the backlight too high will ruin the display’s pre-calibrated output. Black luminance isn’t the best since the panel can still look grayish in dark rooms, but this model’s rendering is still better than many IPS models we’ve seen.

The BenQ SW240’s panel uniformity is superb with deviations limited to 11%. However, the flaw is concentrated on the lower right corner which showed considerable leaking. This had an effect on color and contrast uniformity, but take note that problems like this vary between unit to unit.

Motion handling isn’t the BenQ SW240’s strongest trait, but it can handle pixel transitions at a decent level. The screen doesn’t blur with minor movements, but panning the screen too fast will reveal some persistence in the pixels. We think this is caused by the limited refresh rather than sluggish pixel response times since the effects are comparable to many 60Hz IPS monitors we’ve tested.

The BenQ SW240 isn’t meant for gaming, so it doesn’t carry related features such as FreeSync or G-Sync compatibility. It’s suitable for casual play, but you’re better off with a cheaper, and more agile variant. Input lag is slightly higher at 17ms, but delays will hardly be felt by most users.

Thoughts on the BenQ SW240

The BenQ SW240 is an extremely ideal monitor for photographers and content creators who do not want to spend a small fortune on a display. The device’s factory calibration is more than decent, giving users a usable output for color-critical work. The 16:10 bezel-free screen provides excellent visibility, plus, it’s suitable for multi-head setups.

The BenQ SW240 isn’t too expensive, but it costs more than twice of many 1080p variants you’ll see next to it. Its imaging quality is excellent, but the cost might be too high for some since it can already buy into 1440p or even 4K territory.